First Lady Jill Biden traveled to Romania Friday carrying five gallons of ketchup on board Executive One Foxtrot after hearing that the military base she was visiting was running out.

Biden brought Heinz ketchup – a condiment created in her home state of Pennsylvania – to Mihail Kogalniceanu Air Base, her spokesman confirmed to DailyMail.com.

Her visit to ‘MK base,’ as it’s called, marked the first of a four-day Mother’s Day weekend tour of Romania and Slovakia, which will put the first lady face-to-face with Ukrainian refugees. 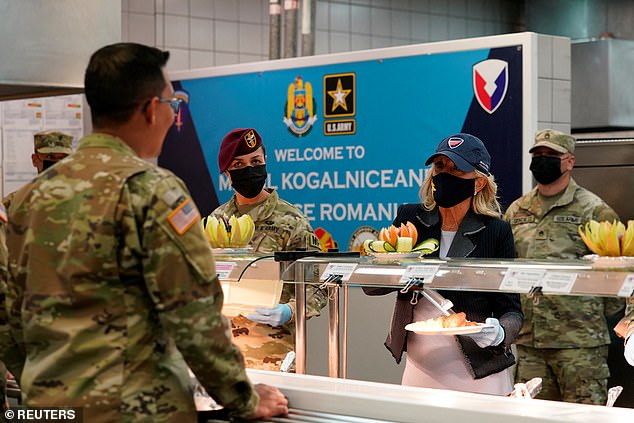 First Lady Jill Biden serves meals to U.S. servicemembers stationed at the Mihail Kogalniceanu Air Base in Romania on Friday 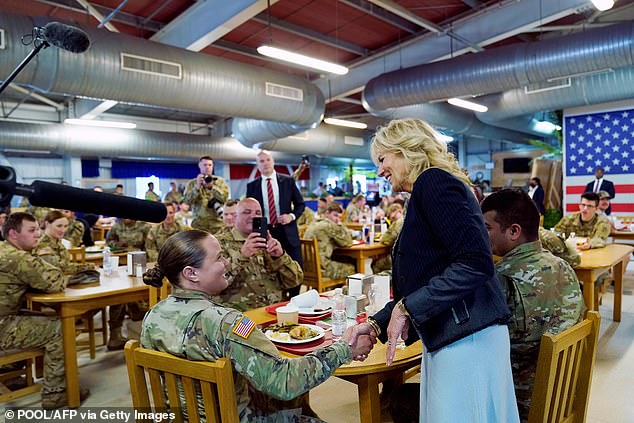 First Lady Jill Biden greets American servicemembers during her Friday visit to Mihail Kogalniceanu Air Base, the first stop on her four-day trip to Romania and Slovakia 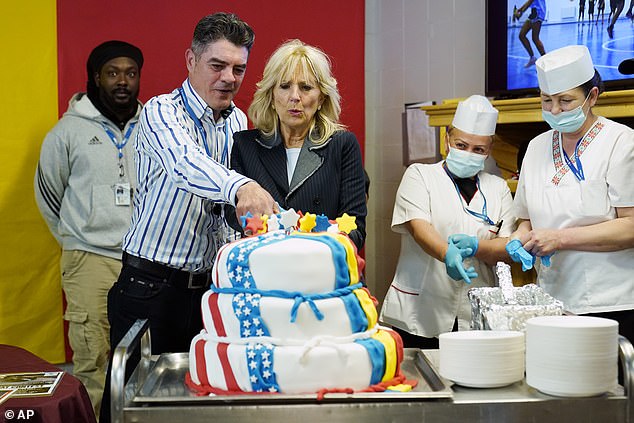 On base, the first lady – sporting a Beau Biden Foundation ballcap and a black mask – served mac and cheese and potatoes to U.S. troops, as American personnel has expanded to about 2,700 since Russia invaded Ukraine.

The base is located near the Black Sea. The first lady flew on to Romania’s capital city Bucharest, where she’ll remain overnight.

Biden, who has done a number of domestic trips to bases as part of her resurrected Joining Forces initiative, chatted with the servicemembers as she plated their food.

‘Do you want a potato?’ she asked at one point. ‘That’s all you want?’ she said at another.

She spent several minutes chatting with a fellow Pennsylvanian who said he also attended the University of Delaware, her alma mater.

‘I’m a Blue Hen, too! So is my husband,’ FLOTUS remarked. 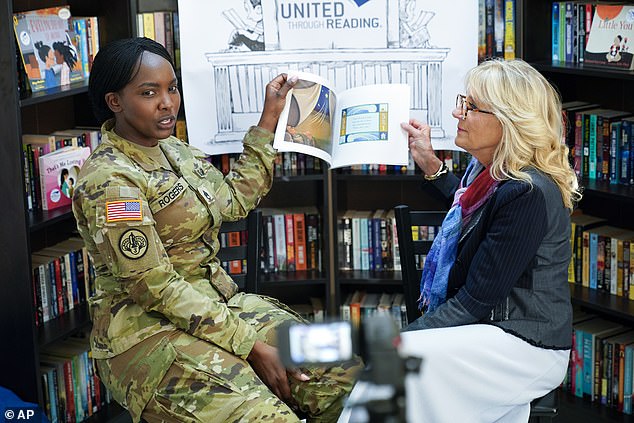 After serving food she walked into the dining area – two bottles of ketchup in hand.

The first lady volunteered to cut the three-tiered American flag cake, explaining to the crowd that she realized everyone was likely waiting for it.

Afterward, Biden headed to the ‘morale and welfare center’ on base to read the children’s book Night Catch alongside Staff Sergeant Sharon Rogers.

Rogers dedicated the reading to her son Nathan, who is back in the United States.

‘Thank you for your service because when your mom serves, you serve too,’ the first lady said to the camera.

The reading was being videotaped as part of a virtual storytime program that’s a partnership between Joining Forces and a group called United Through Reading, which connects military families when a family member is deployed through recorded virtual book readings.

Hundreds of people were gathered behind a barrier in...
Celeb Zone

You can’t very well have a reminiscent conversation about...
- Advertisement -