First Lady Jill Biden allowed her outfit to do all the talking on Thursday, when she appeared to take a subtle swipe at Melania Trump by wearing a blazer emblazoned with the word LOVE – three years after her predecessor prompted outrage by donning a jacket that read ‘I really don’t care’ when visiting immigrant children in Texas.

The 70-year-old seemed to send a clear sartorial message by recycling the black Zadig & Voltaire design, which features the word love on the back in diamante embellishments, for a trip to the beach in Cornwall with her British counterpart, Prime Minister Boris Johnson’s wife Carrie, 33.

Jill paired the blazer with a black-and-white polka dot dress from Brandon Maxwell, and swapped her elegant black heels for a pair of white flip flops as she strolled along the sand with Carrie and her one-year-old son Wilfred.

At one point, the professor removed her footwear altogether in order to dip her toes in the water alongside her British counterpart, with both women seen laughing and joking around together while Wilfred sad happily on the sand.

Jill’s jovial report with Carrie failed to distract from her choice of outerwear however, which drew clear comparisons with the controversial design worn by Melania, 51, in 2018.

The former First Lady faced bitter backlash after she was seen wearing a $39 khaki jacket, which had the words ‘I don’t really care, do u?’ splashed across the back in graffiti-style writing, during a trip to a migrant child detention center in McAllen, Texas. 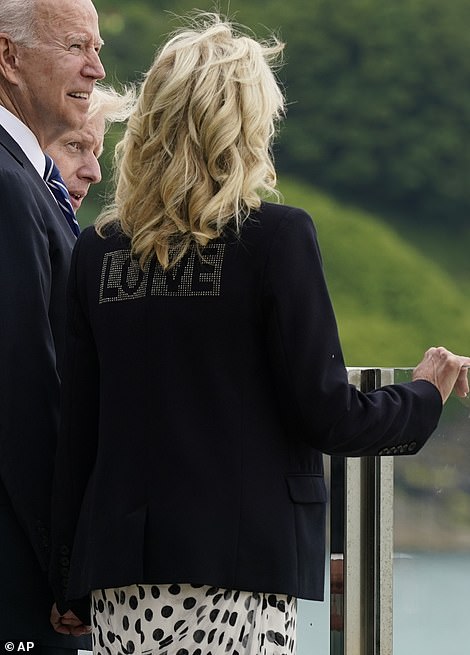 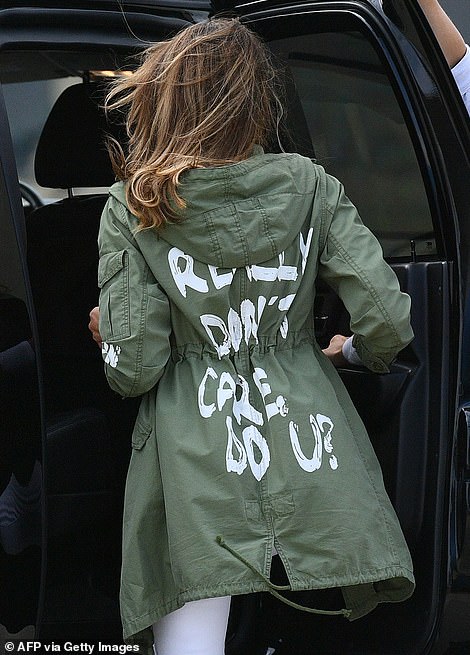 Comparisons: First Lady Jill Biden appeared to take a swipe at Melania Trump on Thursday by wearing a blazer with ‘LOVE’ written on the back in contrast to the ‘I don’t really care, do u?’ jacket her predecessor wore to visit immigrant children in 2018 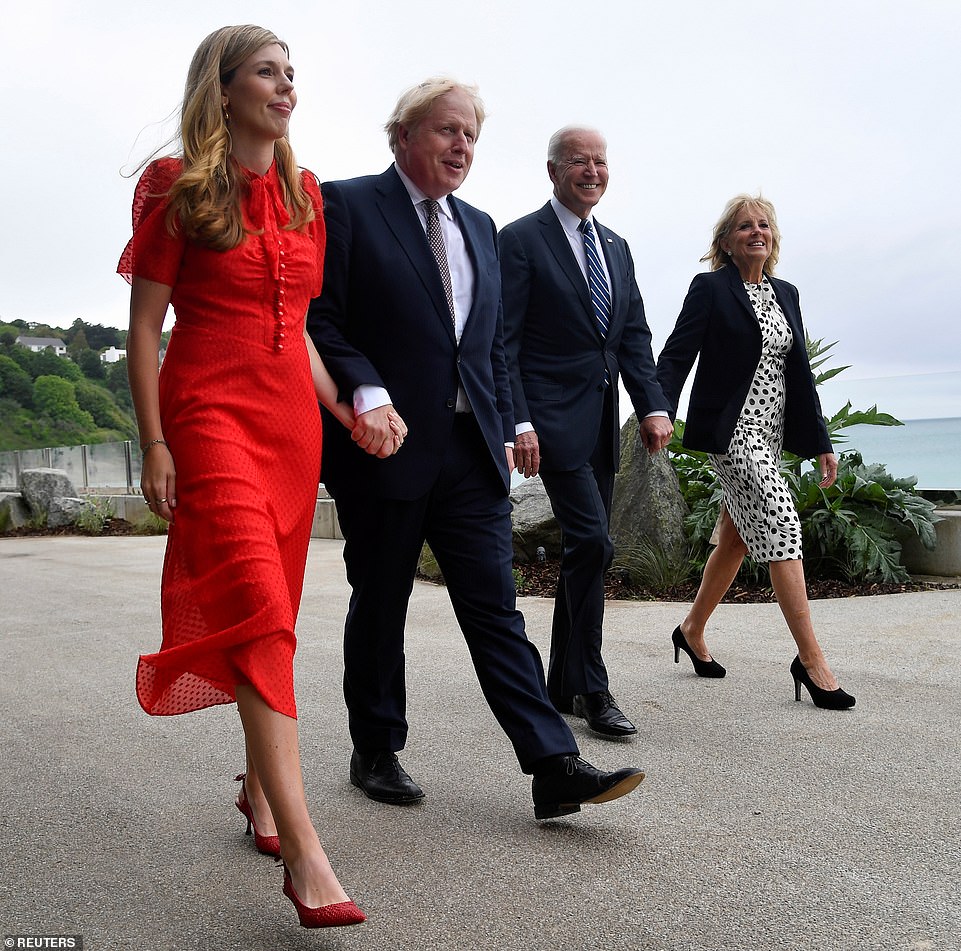 Meeting: Jill, 70, wore the blazer when she and her husband, President Joe Biden, met with Prime Minister Boris Johnson and his wife Carrie in Cornwall, where the group was seen taking a stroll by the beach 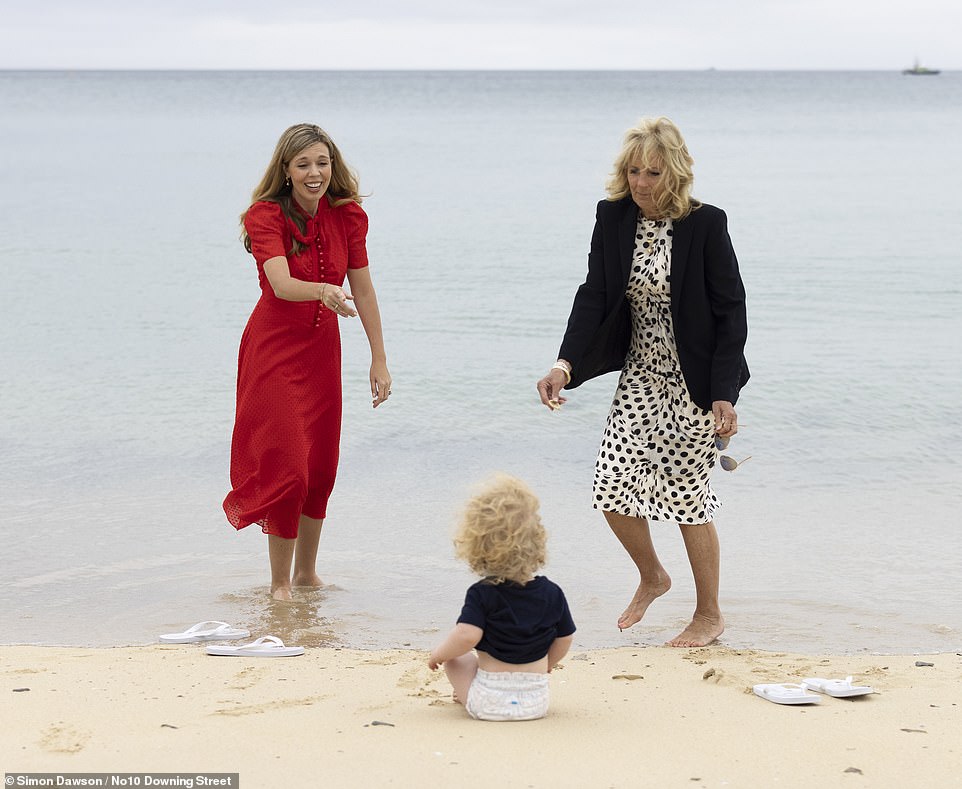 Mom’s day out! Jill later spent time at the beach with Carrie and her one-year-old son Wilfred 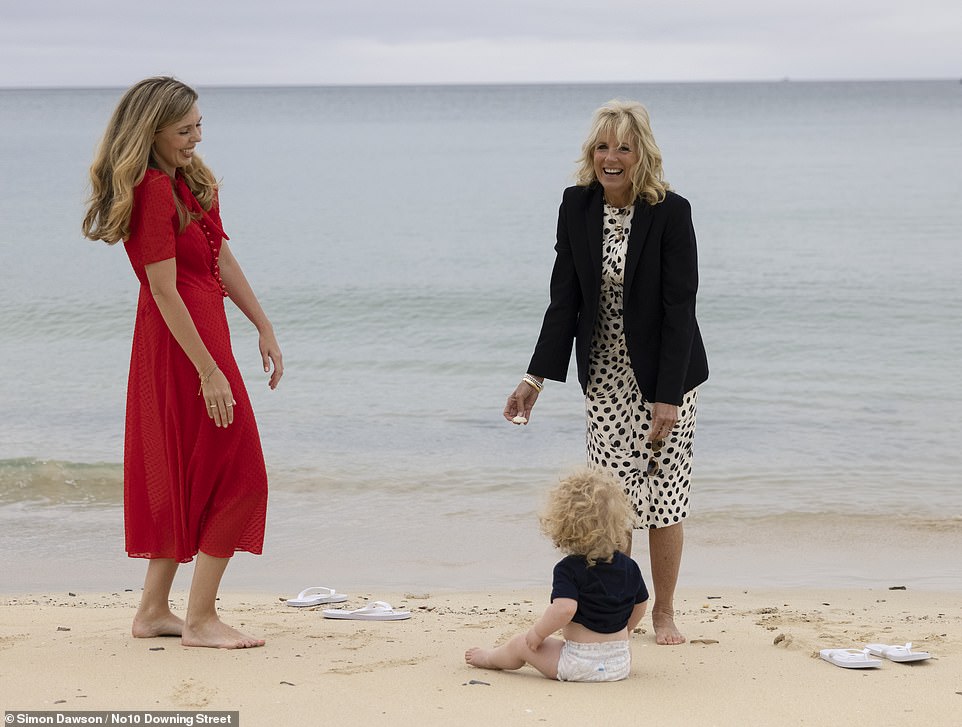 Bright and breezy: Despite the gloomy day, Jill, 70, looked to be in excellent spirits as she enjoyed some time at a beach in Cornwall with Carrie, 33, and Wilfred 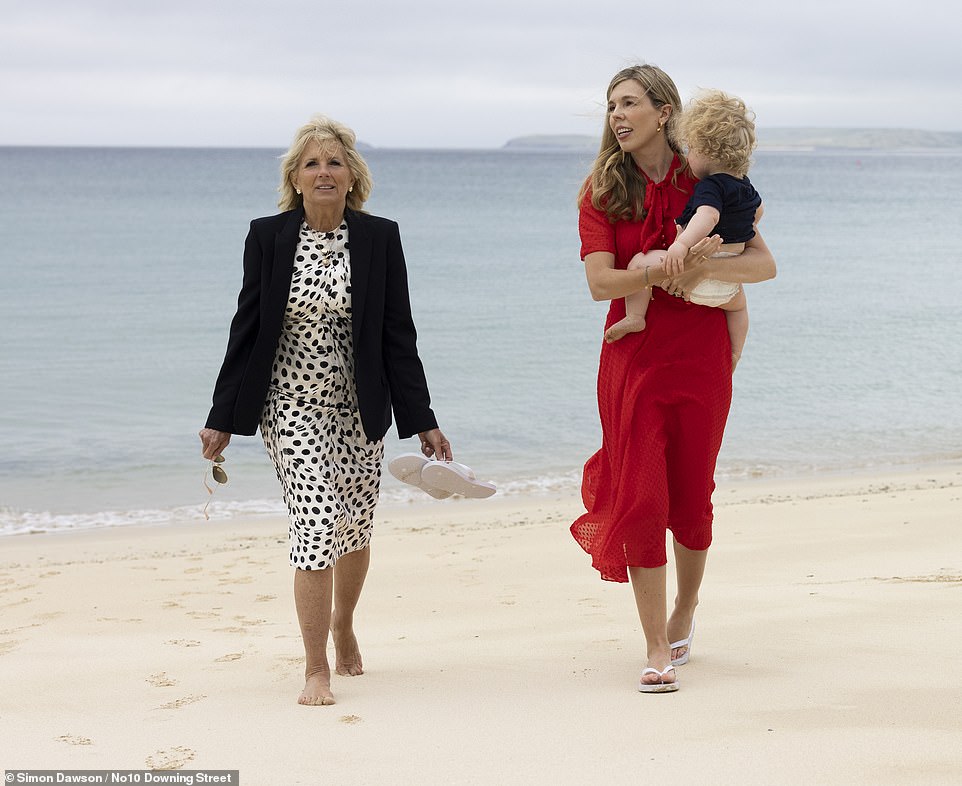 Style stars: Both women wore very formal ensembles for their beach outing, with Jill looking elegant in a custom-made black-and-white dress from Brandon Maxwell, which she wore with her Zadig & Voltaire blazer

In a sit-down interview with ABC’s 20/20, Melania insisted that her message had been misconstrued, telling Tom Llamas that the statement was meant ‘for the people and for the left-wing media who are criticizing me.’

However, her outfit selection was lambasted as as being tone deaf, given the tense situation at the time; many of the children had been separated from their parents as part of the Trump administration’s zero-tolerance policy towards illegal immigration.

Commenting on her own fashion choice for Thursday’s outing, Jill said: ‘We’re bringing love from America… This is a global conference, we’re trying to bring unity across the globe.’

She added: ‘I think it’s needed right now, that people feel a sense of unity from all the countries and feel a sense hope after this year of the pandemic.’

Meanwhile, Melania’s now infamous jacket was first photographed as she boarded her plane at Andrews Air Force Base in Maryland on June 21, 2018, headed to Texas.

Speaking about her controversial look five months after first wearing it, Melania said: ‘I want to show the [left-wing media] that I don’t care. You could criticize whatever you want to say, but it will not stop me to do what I feel is right.’

‘It was kind of a message, yes,’ Melania added, contradicting the official White House word on the matter, from back in June, 2018. ‘I would prefer that they would focus on what I do and on my initiatives [rather] than what I wear.’ 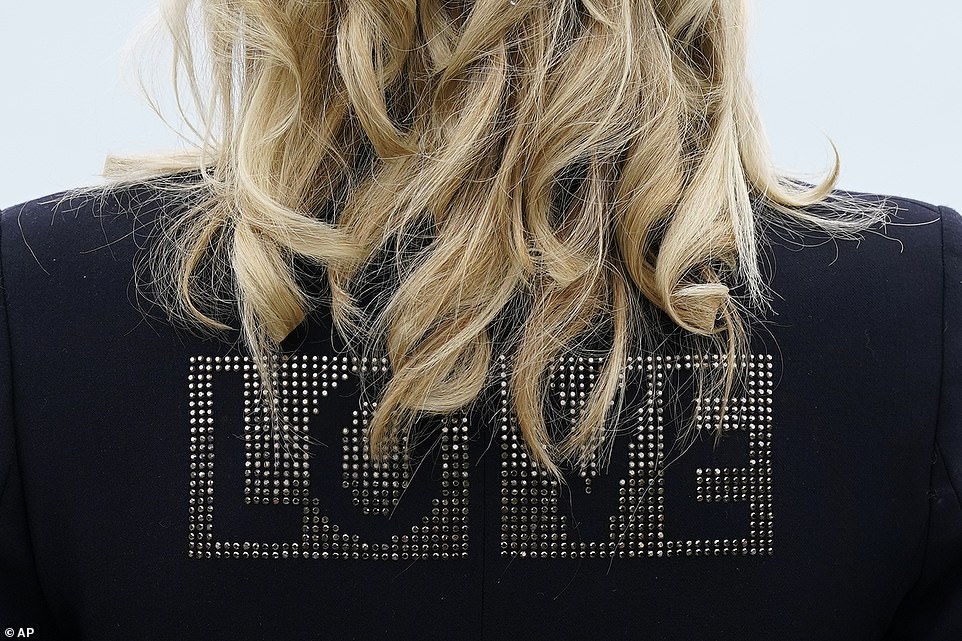 The university professor, 70, was on message for the meet-and-greet, wearing a recycled Zadig & Voltaire blazer with the word ‘love’ on the back (pictured), teamed with a polka dot dress 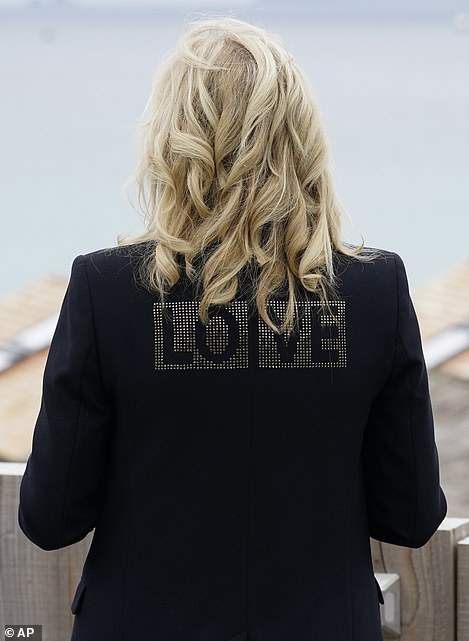 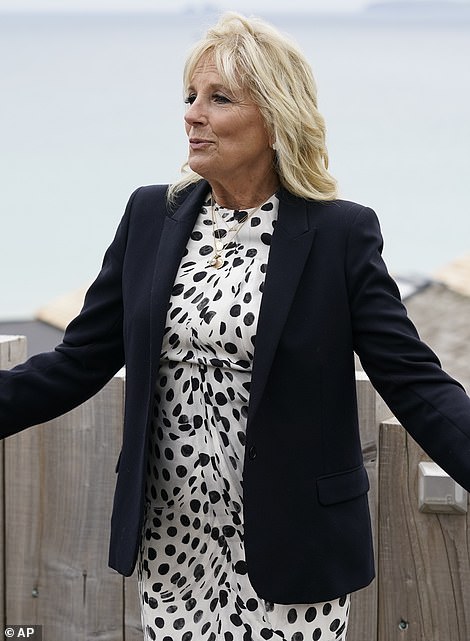 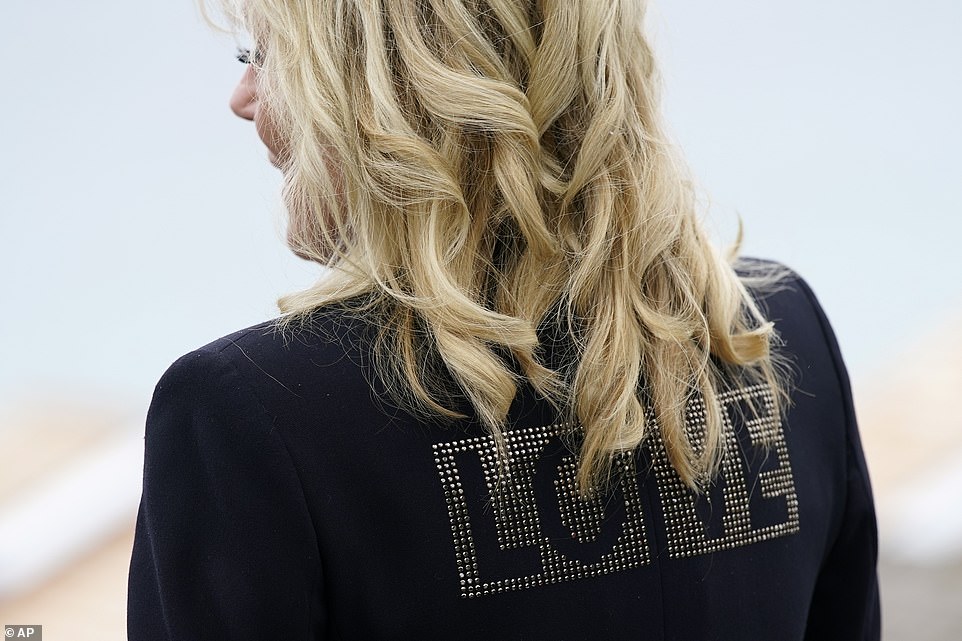 During her meeting in Cornwall, Jill (pictured) said: ‘We’re bringing love from America… This is a global conference, we’re trying to bring unity across the globe.’

The Bidens and the Johnsons met on a scenic deck overlooking St Ives Bay, today. Carrie, 33, dressed in a scarlet £325 LK Bennett frock and matching £49.99 Zara shoes, was a vision in red as she walked hand-in-hand with the Prime Minister.

Jill briefly spoke with media after she finished having tea with Carrie, saying: ‘It’s really nice to be here in Cornwall. It’s my first time. Obviously it’s beautiful for those of you have been here before.’ She added: ‘Joe and I are really looking forward to meeting everyone at the G7.’

‘That’s an exciting part of the visit for us. We’ve looked forward to this for weeks and now it’s finally here. It’s a beautiful beginning.’ 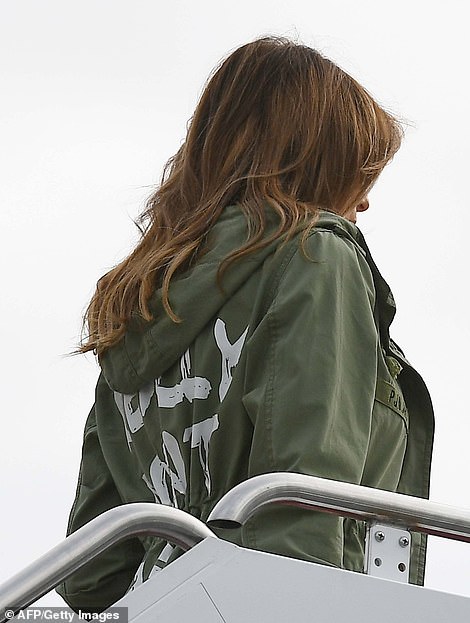 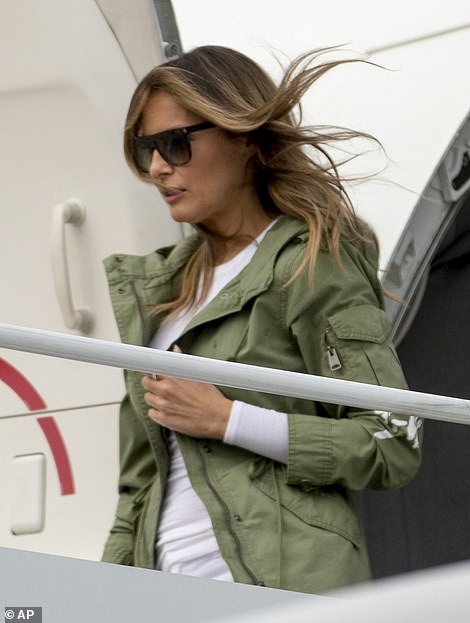 Melania’s now infamous jacket was first photographed as she boarded her plane at Andrews Air Force Base in Maryland on June 21, 2018, headed to Texas (pictured)

Ahead of the President and Prime Minister’s meeting today, officials tried to down play tensions amid a transatlantic row over Northern Ireland, emphasising the special relationship between the two nations.

At the sit down, Biden recycled one of his favourite lines, saying the two men had something in common – both married above their station. Boris and Carrie Johnson wed on May 29.

The face-to-face greeting came after the White House backed down following a report Biden rebuked Johnson for ‘inflaming tensions’ in Northern Ireland.

The Times reported that Biden ordered US officials to give Johnson an extraordinary diplomatic rebuke for putting the Northern Ireland peace process at risk over Brexit negotiations with the European Union. Biden officials quickly denied the report ahead of the talks between the two leaders. 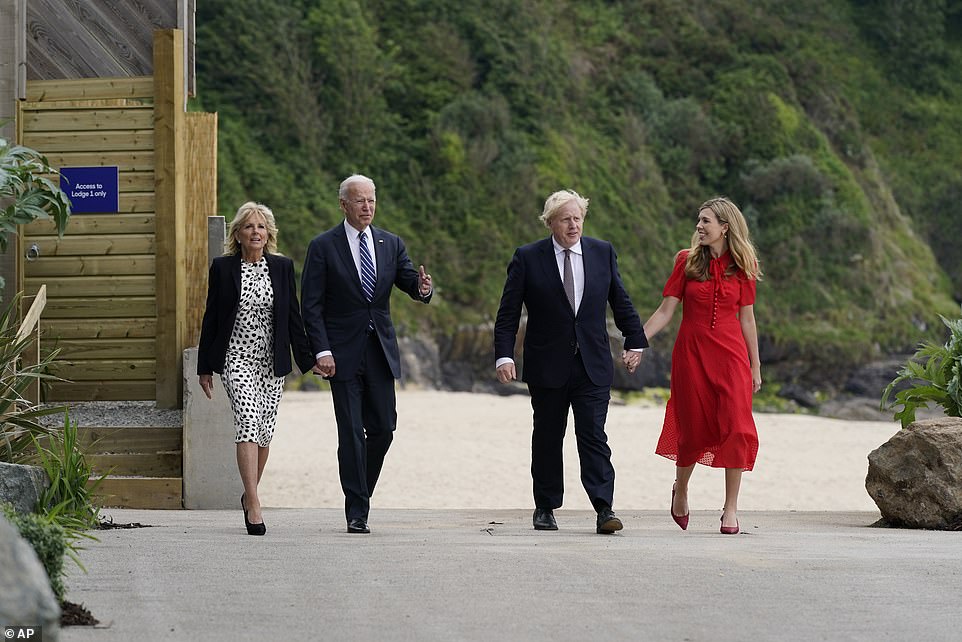 The Bidens and the Johnsons (pictured walking together) met on a scenic deck overlooking St Ives Bay, England, with a view of the Atlantic Ocean in front of them 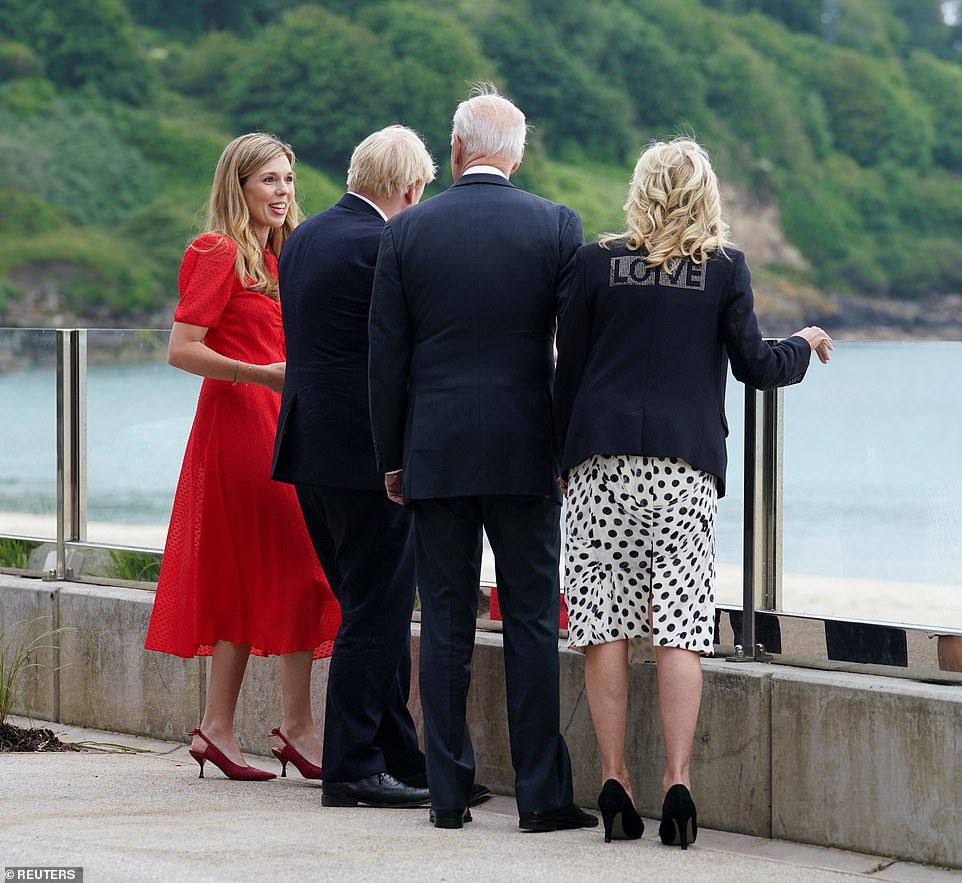 Jill (pictured right) briefly spoke with media after she finished having tea with Carrie (pictured left), saying: ‘It’s really nice to be here in Cornwall. It’s my first time. Obviously it’s beautiful for those of you have been here before’ 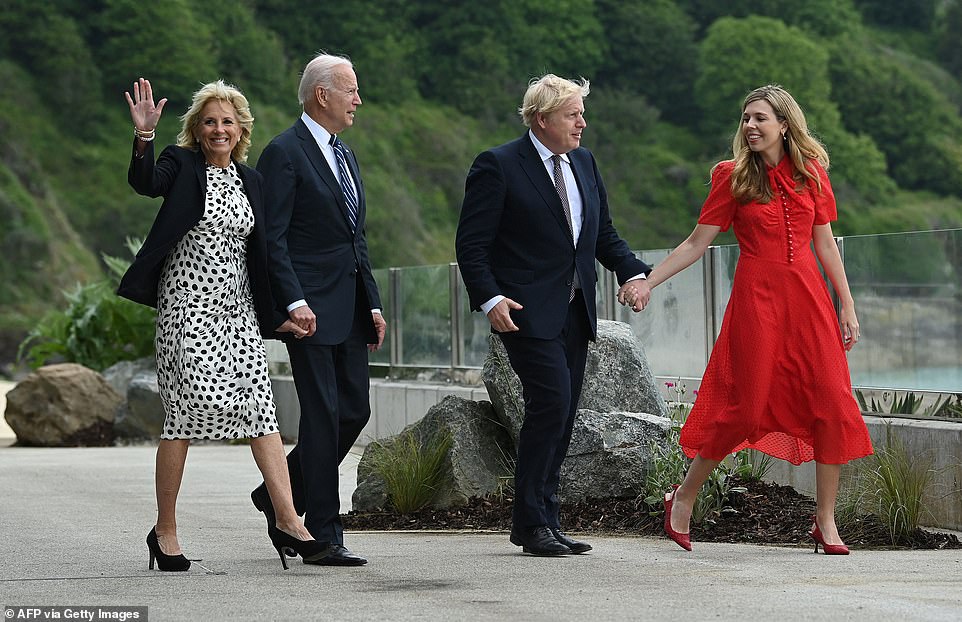 The First Lady, pictured alongside her husband Joe and the Johnsons, added: ‘Joe and I are really looking forward to meeting everyone at the G7’ 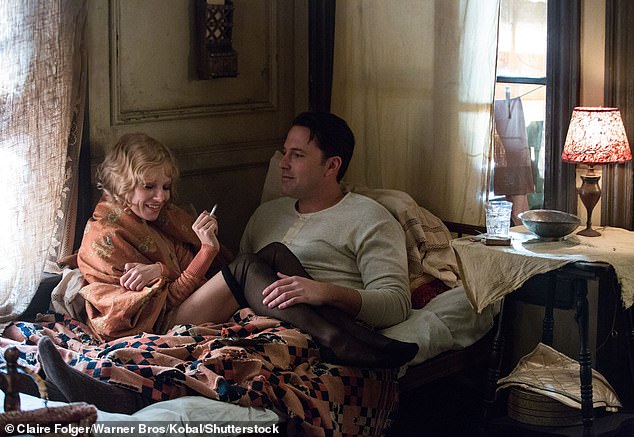 Sienna Miller said she had ‘zero chemistry’ with her co-star Ben Affleck in the film Live by Night, despite playing lovers in the movie. The 40-year-old actress said the actor was more like a ‘brother’ during an appearance on The Drew Barrymore Show.  ‘We had zero chemistry whatsoever it was hysterical,’ she said. ‘We were supposed… 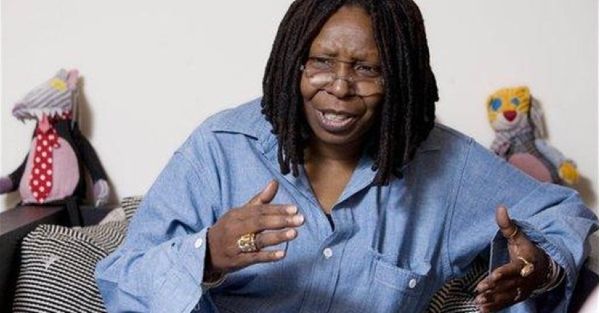 Supreme Court Justice Clarence Thomas, you’d better watch out. The Supreme Court is comin’ for you. But don’t take our word for it; take Whoopi Goldberg, who famously always knows exactly what she’s talking about. She and her fellow experts on “The View” were, of course, tackling SCOTUS’ Dobbs ruling today from the Bahamas: Telling… 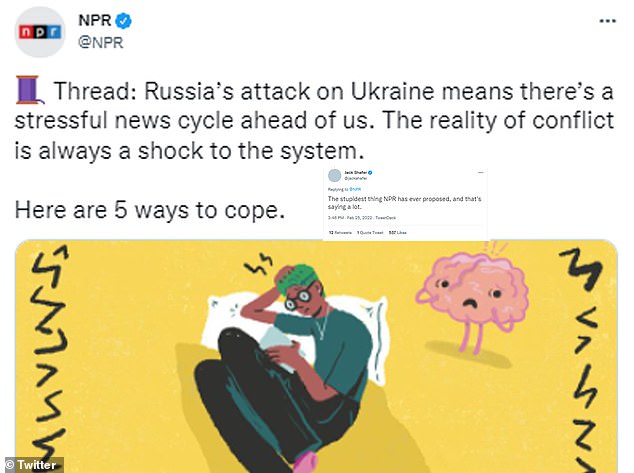 Bosses on the achingly-woke NPR community have been condemned over a mollycoddling write-up geared toward serving to Individuals left ‘burdened’ by the unfolding Ukraine disaster. The story, revealed Friday, was titled: ‘5 methods to deal with the anxious information cycle,’ and was blasted as patronizing and tone-deaf, given the bloodshed and heartache being confronted by… 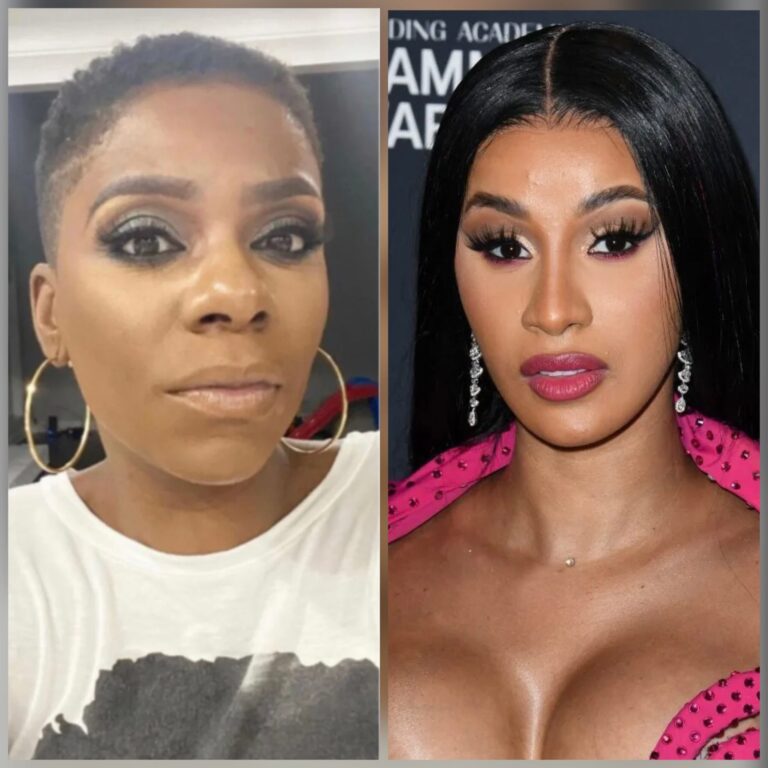 It’s been six months since Cardi B came out victorious (legally and financially) in her defamation lawsuit against YouTuber Tasha K where she was awarded a whopping $4 million, but now Tasha K is headed back to court. According to new court documents, Tasha K has filed an updated appeal to one she previously filed… 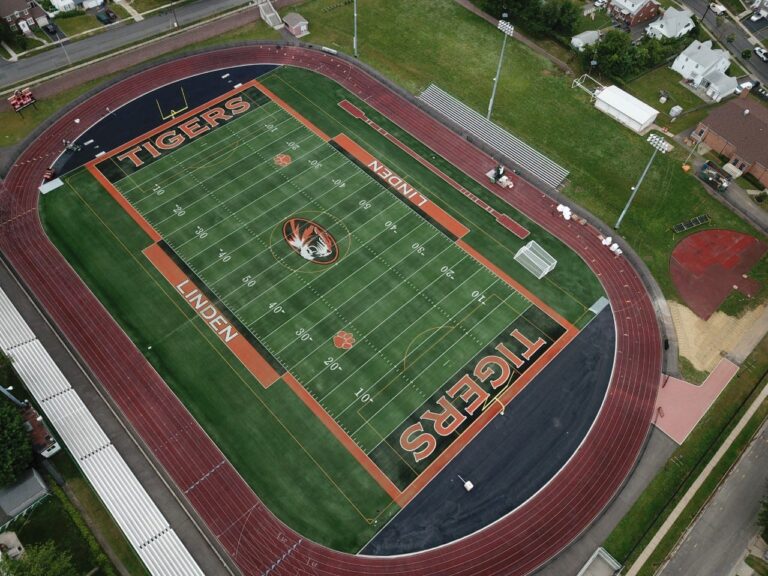 LINDEN – Xavier McClain, a Linden High School football player, who was critically injured in a game earlier this month, has died, school district officials announced. “Xavier was critically injured during a varsity football game on Sept. 9, 2022. He has been hospitalized since and tragically passed away last evening. We are extremely saddened by… 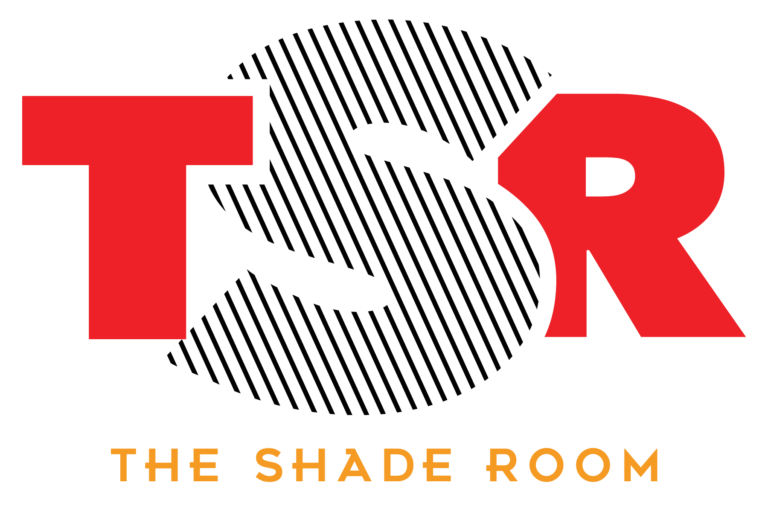 For many Black women, having a relaxer was once considered a societal norm. Yet, that same staple of Black hair care could be doing more harm than good. That is certainly the case for 28-year-old Jenny Mitchell, who claims that she developed uterine cancer which led to her having a hysterectomy as a result of…