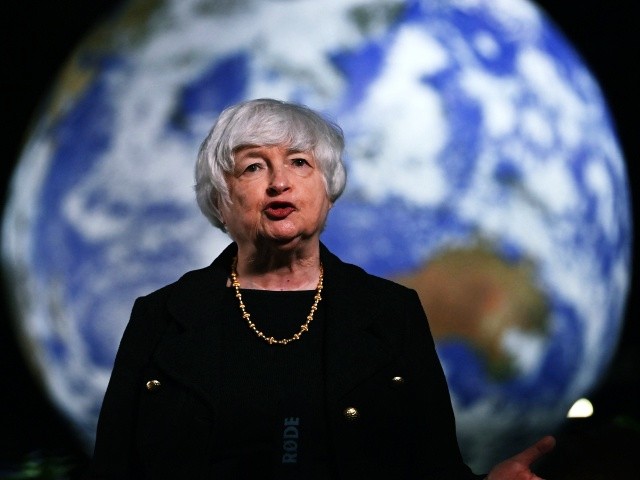 In recent weeks, Biden has said his administration is reviewing potential cuts to Section 301 tariffs on billions of dollars worth of China-made products. The tariffs have long been applauded by labor unions for helping boost U.S. wages and American manufacturing.

An exclusive report from Reuters details how Treasury Secretary Janet Yellen is leading the charge within the Biden administration to cut U.S. tariffs on China. U.S. Trade Representative Katherine Tai, an economic nationalist, is trying to stave off cuts to tariffs.

President Joe Biden will have to resolve a heated internal debate among his aides over whether to cut taxes on goods from China as his administration tries to battle inflation, according to two U.S. officials and three other people familiar with the conversations. [Emphasis added]
…

U.S. Treasury Secretary Janet Yellen is among those who want to slash many of these tariffs, while U.S. Trade Representative Katherine Tai wants to hold off for a broader China trade strategy that addresses protecting U.S. jobs and China’s behavior in global markets, sources say. This approach could even include new strategic tariffs. [Emphasis added]

Yellen believes some of the tariffs are not in the U.S.’s economic interest and cost consumers irrespective of the inflation argument, according to a person familiar with the discussions. [Emphasis added]

The Chamber of Commerce is likewise lobbying Biden to cut U.S. tariffs on China and re-enter negotiations for free trade deals with foreign countries.

Meanwhile, Sen. Josh Hawley (R-MO) sent a letter to Tai urging that cutting U.S. tariffs is a “misguided policy proposal” that would amount to a “strategic blunder” for the American economy and the nation’s workforce.

“To cut tariffs at this juncture would be a strategic blunder. Not only would it reward China for its latest act of deceit, but it would give them a green light to do so again in the future,” Hawley wrote to Tai.

“… unfortunately far too many Republicans and of course the entire Democrat party that’s gotten rich off the way we do business with China, this is one of the things,” Vance said. “… you know managed decline is bad for normal Americans but it’s actually pretty good if you’re one of the people who’ve profited from the decline.”

Already, the Biden administration has eliminated U.S. tariffs on more than 350 China-made products — a major win for multinational corporations that have long outsourced manufacturing to China.

John Binder is a reporter for Breitbart News. Email him at [email protected] Follow him on Twitter here.

Clement Lenglet 'is heading for his Tottenham...

With the Luhansk region under Russian control, President Vladimir Putin may now focus on seizing all of the Donbas...
- Advertisement -

If you own a fainting couch, now might be...
- Advertisement -