Johnny Depp was pictured smiling and waving to fans when he left the courthouse on Friday while Amber Heard was seen hugging her lawyer as jurors began deliberations in the bitter $100million libel six-week trial.

The 58-year-old Pirates of the Caribbean actor looked in good spirits as he left and shook hands with police officers before appeasing the large crowd of fans outside who were armed with banners and cameras.

As jurors retired on Friday, a defamation expert has suggested Amber Heard could be prosecuted over claims she ‘edited injury photos’ which were used as part of evidence in the blockbuster suit.

Depp is suing his ex-wife Amber Heard in Virginia for $50million, arguing that she defamed him when she called herself a ‘public figure representing domestic abuse’ in an opinion piece she wrote.

Fellow actor Heard, 36, countersued for $100 million, saying Depp smeared her when his lawyer called her accusations a ‘hoax.’

Defamation lawyer Aaron Minc told news outlet JOE that despite initially deciding there was ‘zero or less than 1 per cent chance’ Heard would face prosecution, he had since changed his mind.

He told JOE:  ‘I think that, as this case goes on, and we start seeing more and more objective evidence that she is lying about things under oath, that’s when it starts crossing the line into the possibility that she is fabricating evidence, fabricating photos, fabricating bruises, altering evidence and then submitting it.’

Mr Minc described fabricating evidence as ‘really serious’ and ‘really offensive’ to the justice system, adding: ‘I would hope that prosecutors would take a look at it because if there is very clear evidence that she did it, that should certainly be considered.’

Jurors deliberating the dueling defamation trial adjourned yesterday without delivering verdicts, leaving the resolution in the widely watched six-week trial to next week.

The seven-person jury deliberated for more than two hours on Friday and will resume discussions on Tuesday after the US Memorial Day holiday. 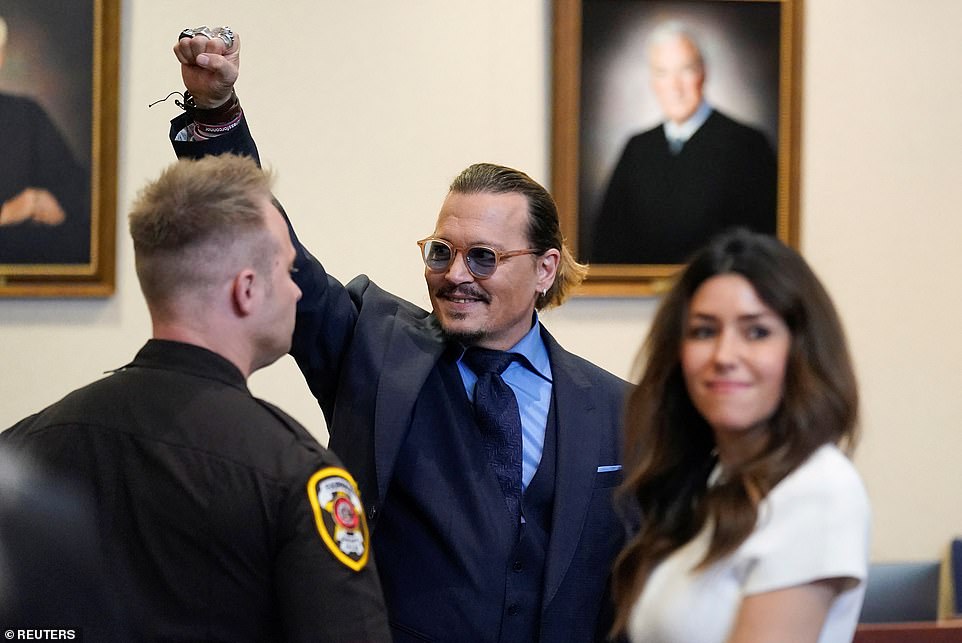 Johnny Depp was pictured smiling and waving to fans as he left the courthouse on Friday while jurors began deliberations in the bitter $100million libel trial. Jurors deliberated for two hours before they were adjourned to return on Tuesday next week 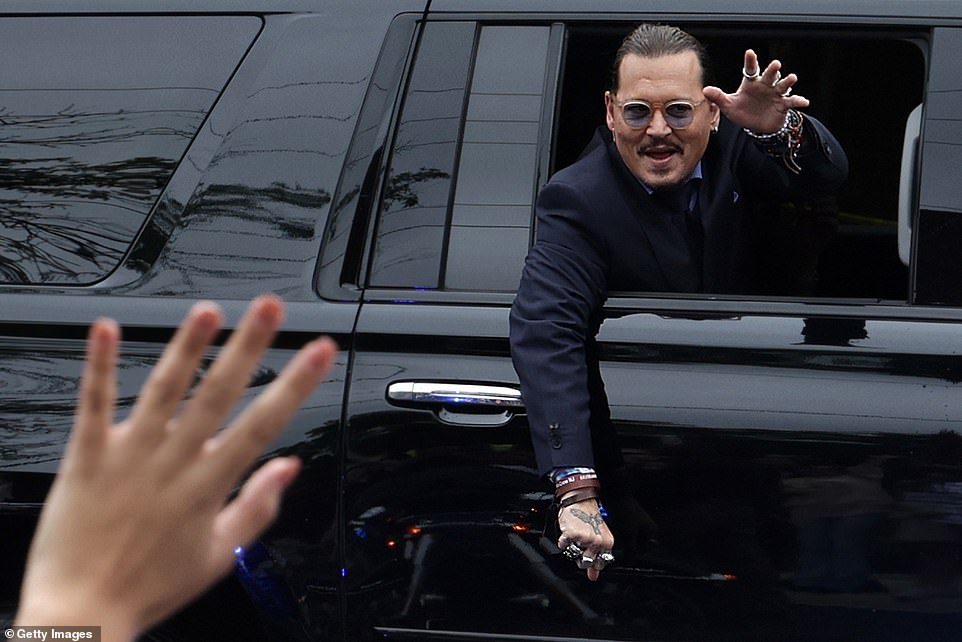 It was six years ago yesterday that Amber Heard filed a restraining order against Depp, which his lawyers ‘ruined’ his life 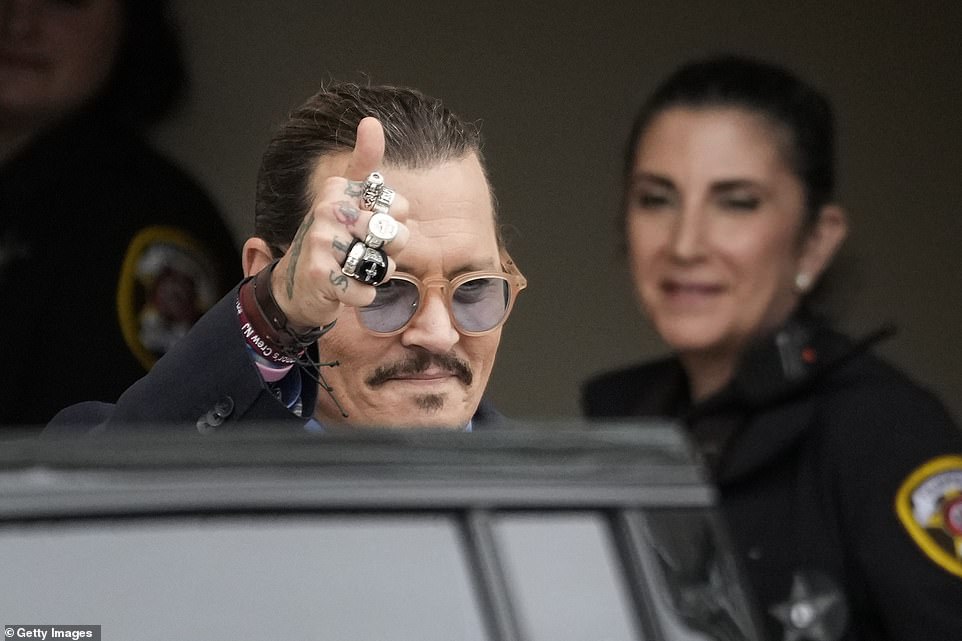 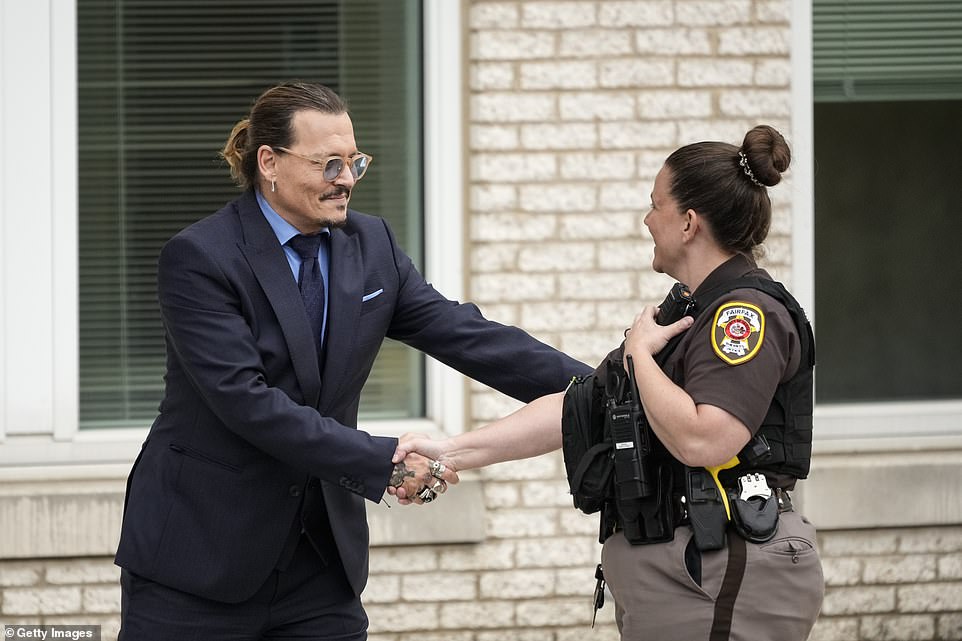 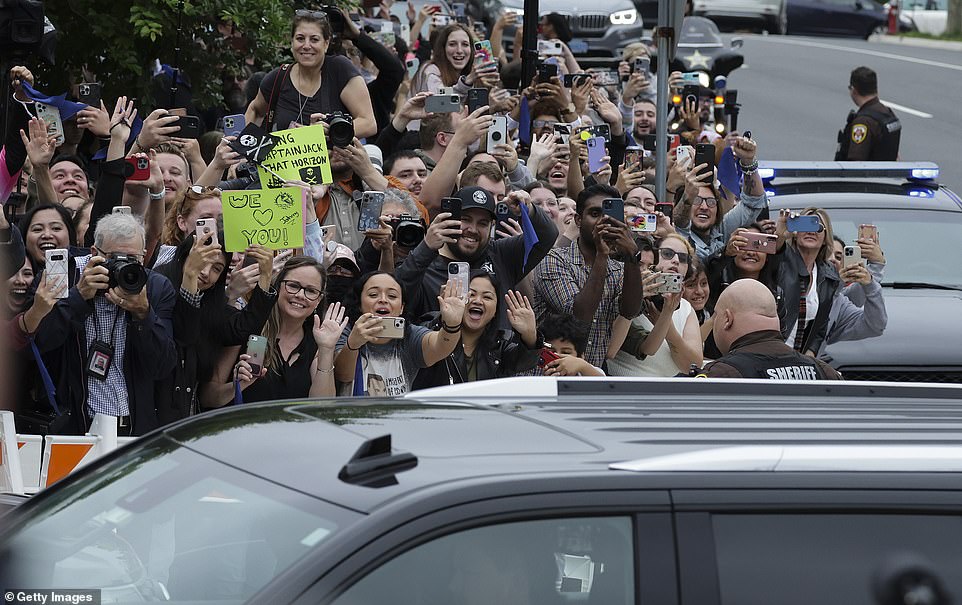 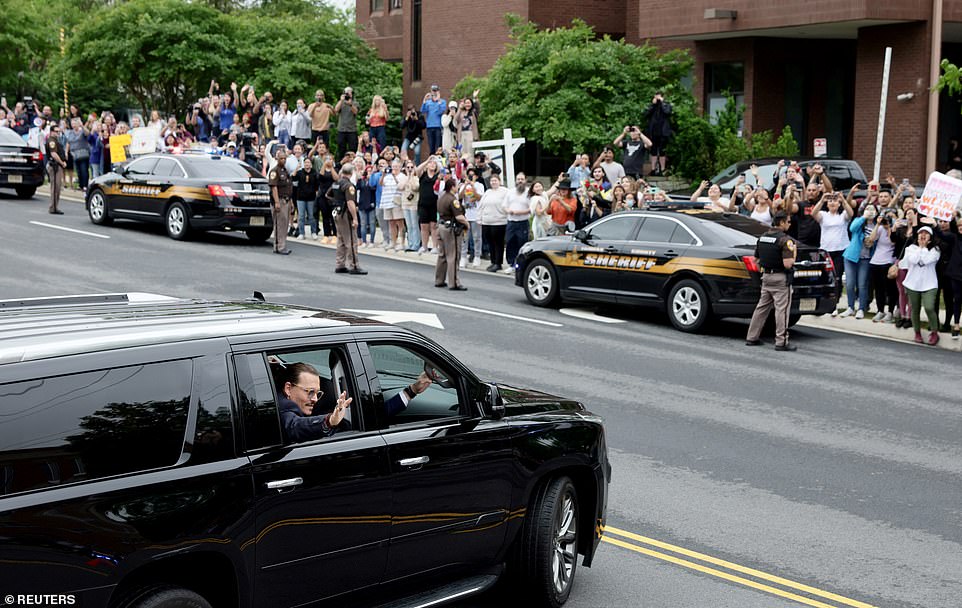 Before closing arguments began Judge Penney Azcarate told the jury that their names would be sealed for a year due to the ‘high profile nature’ of the trial.

At the start of the trial she made no such ruling.

Depp has denied hitting Heard or any woman and said she was the one who turned violent in their relationship.

She said Heard’s allegations of abuse by Depp, including a sexual assault with a liquor bottle, were ‘wild, over-the-top and implausible’ and had ruined his reputation in Hollywood and among fans.

‘We ask you to give Mr. Depp his life back by telling the world Mr. Depp is not the abuser Ms. Heard says he is,’ Vasquez said. 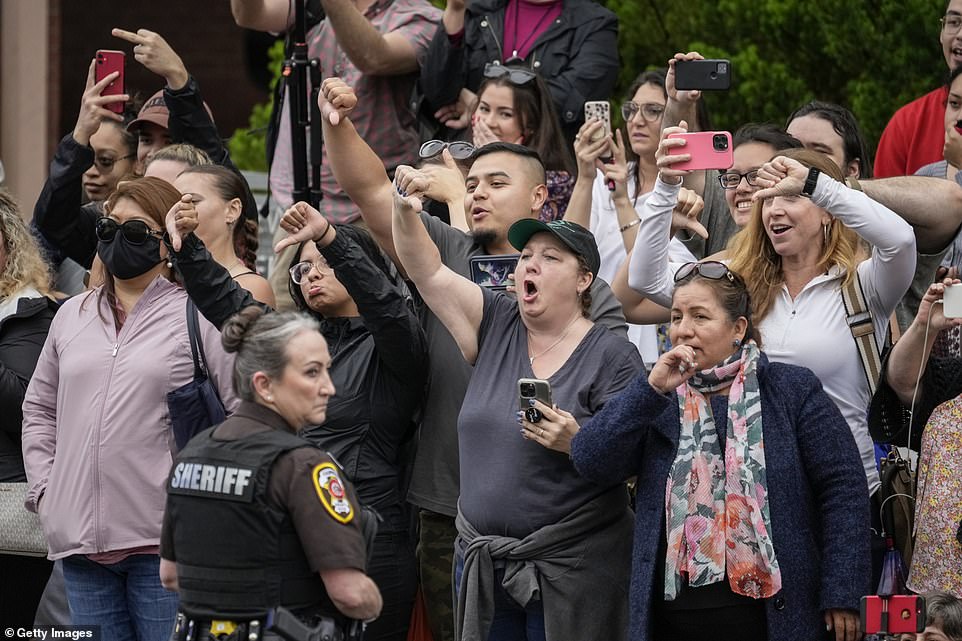 Pictured: Onlookers jeer and gesture as actress Amber Heard departs the Fairfax County Courthouse on May 27 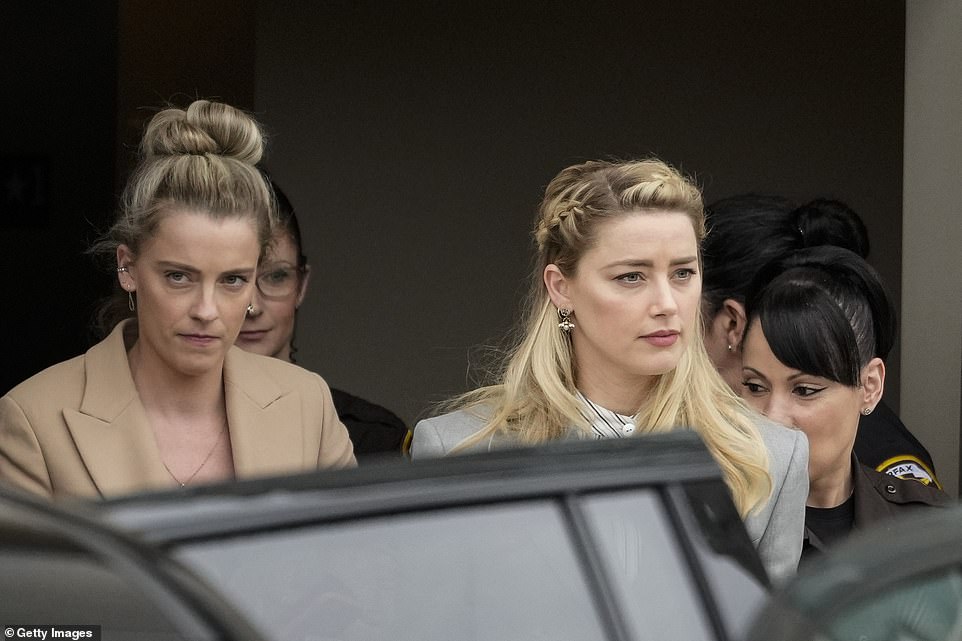 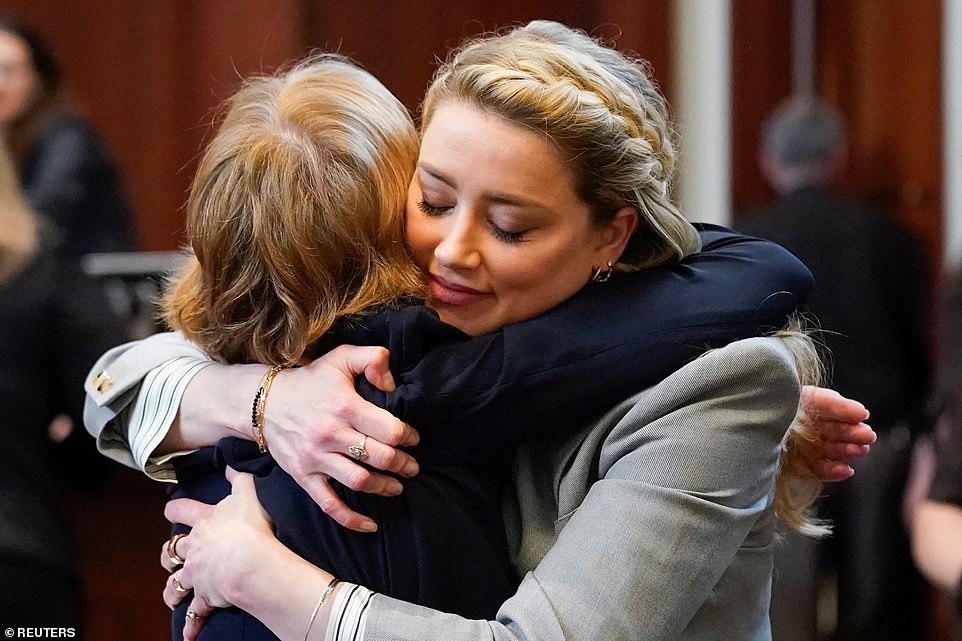 Vasquez noted expert accounts that diagnosed Heard with Borderline Personality Disorder and called the actress a ‘deeply, troubled person’ who is ‘desperate for attention and approval.’

Heard’s lawyer Benjamin Rottenborn, in his closing argument, reminded jurors of explicit text messages from Depp to friends or associates.

In one, Depp called Heard a ‘filthy whore’ and said he wanted her dead and ‘would f**k her burnt corpse.’

‘This is a window into the heart and mind of America’s favourite pirate,’ Rottenborn said. ‘This is the real Johnny Depp.’

At the centre of the legal case is the December 2018 opinion piece by Heard in the Washington Post, in which she made the statement about domestic abuse. The article never mentioned Depp by name, but his lawyer told jurors it was clear that Heard was referring to him. 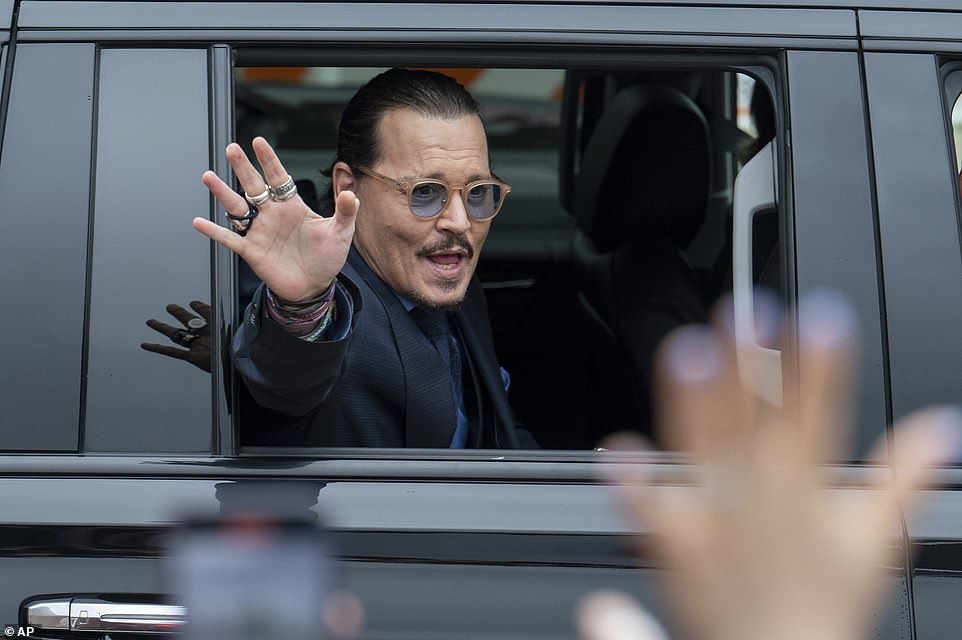 The case centres on an Op-ed by Heard, in which she made claims about domestic abuse but never mentions Depp by name 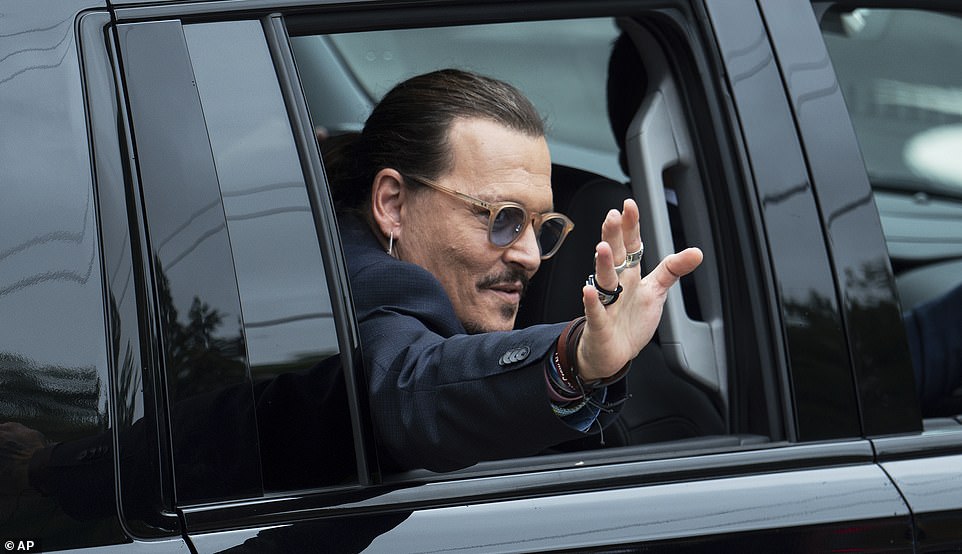 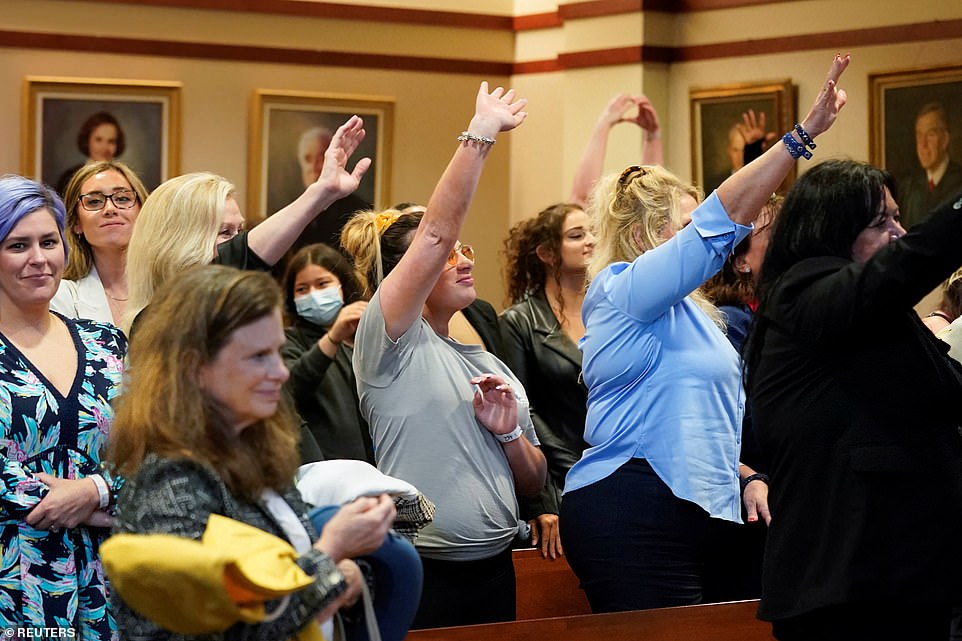 Heard’s attorneys argued that she had told the truth and that her comments were covered as free speech under the US Constitution’s First Amendment.

Depp and Heard met in 2011 while filming ‘The Rum Diary’ and wed in February 2015. Their divorce was finalized about two years later.

Over six weeks of proceedings, jurors have listened to recordings of the former couple’s fights and seen graphic photos of Depp’s bloody finger.

Depp said Heard threw a vodka bottle that cut off the top of his finger during an argument in 2015. Heard denied injuring Depp’s finger and said Depp sexually assaulted her that night with a liquor bottle.

The testimony was livestreamed widely on social media, drawing large audiences to hear details about the couple’s troubled relationship.

Once among Hollywood’s biggest stars, Depp said Heard’s allegations cost him ‘everything.’ A new ‘Pirates’ movie was put on hold, and Depp was replaced in the ‘Fantastic Beasts’ film franchise, a ‘Harry Potter’ spinoff.

Depp lost a libel case less than two years ago against the Sun, a British tabloid that labeled him a ‘wife beater.’ A London High Court judge ruled that he had repeatedly assaulted Heard.

Depp’s lawyers filed the U.S. case in Fairfax County, Virginia, because the Washington Post is printed there. The newspaper is not a defendant.

Passengers on a Delta flight to Minnesota claimed the airline offered them $10,000 to vacate their seats, a Thursday report...

Middle-earth in The Lord of the Rings has...
- Advertisement -