By Heather Waugh For Dailymail.com

Katy Perry got glammed up for American Idol on Sunday as she took her seat at the judge’s table once again.

The 36-year-old singer arrived to the studio in Los Angeles wearing a comfy beige cashmere sweater dress and sneakers, with her dog Nugget in tow.

Carrying a colorful robe and some slides, the mother-of-one looked ready to go as she headed into wardrobe for her transformation. 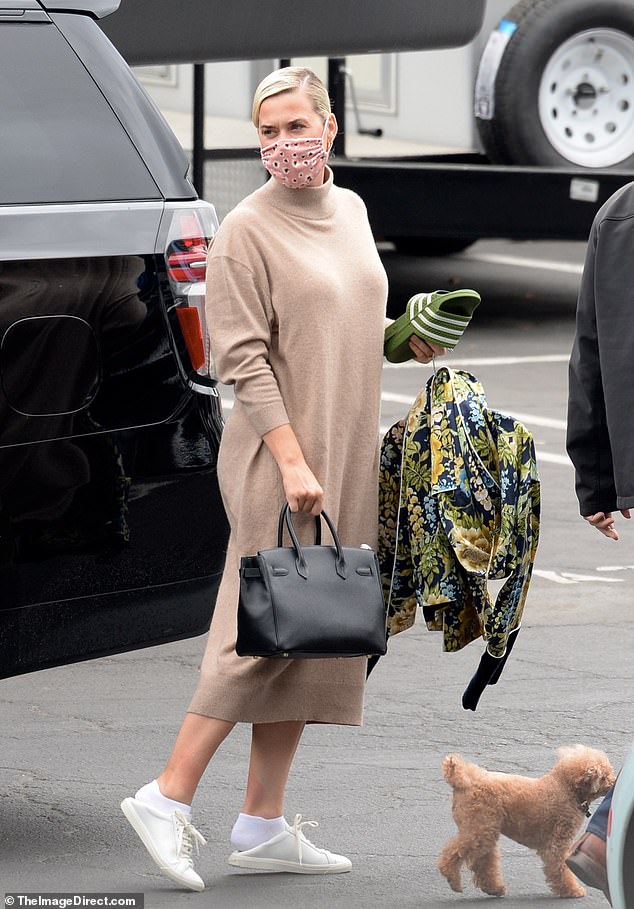 Reporting for duty:  Katy Perry is pictured on Sunday arriving at American Idol in LA

Katy emerged in a deep red vinyl wrap dress and PVC over-thee-knee boots and carried a coffee with her.

During Sunday’s episode of the show, Katy joked about cosmetic work she’s had done on her face.

After watching 21-year-old caretaker Willie sing an original song called Never Be Alone, then do a soaring version of Beyoncé’s I Was Here, Katy was impressed.

‘Every time, I get chills,’ she marveled. ‘Tonight, I got chills in places on my face that I thought I had frozen. Okay? You brought the chills back. It was a Lazarus moment on my face.

‘You have that connection to the next realm,’ she told the Douglas, Georgia, resident. ‘And it’s been so beautiful to see you come in—kind of shy, with this big voice, not so sure—and you are stepping into your power and you are walking in the light. 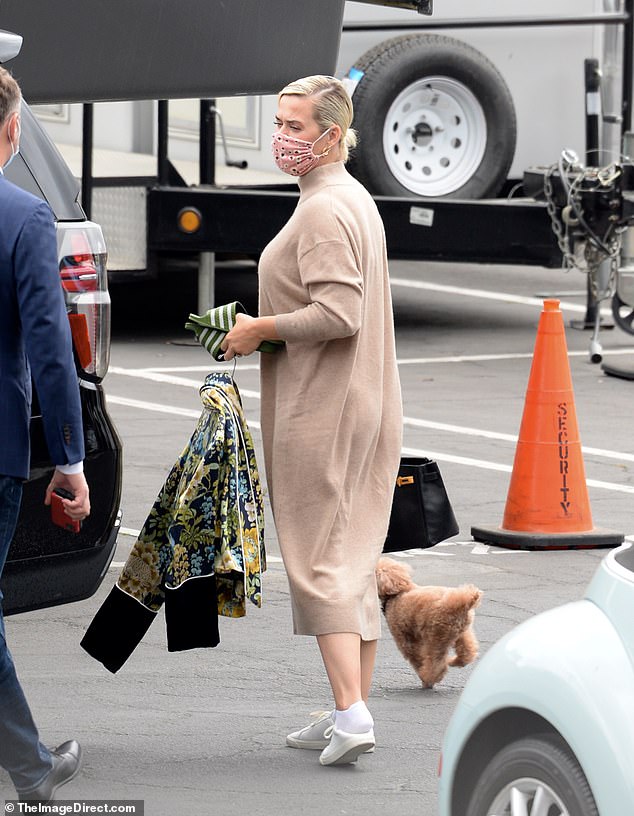 Ready: The 36-year-old was seen in a cashmere sweater dress and white sneakers as she headed into wardrobe ahead of the show 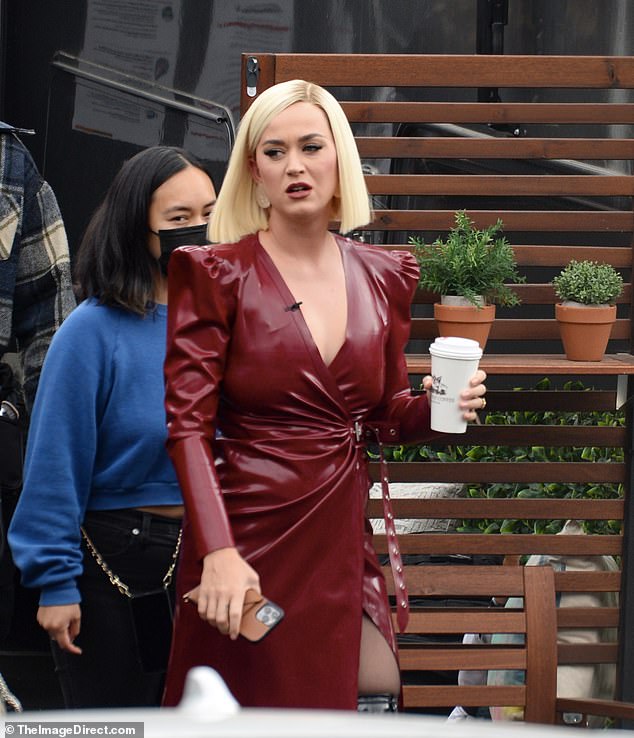 Camera-ready: The singer was seen with coffee in hand after getting glammed up

American Idol will return next week on ABC for the season 19 finale.

Meanwhile, the Roar hitmaker has praised the nurses that helped her when she gave birth to daughter Daisy Dove in August.

The singer – who welcomed her first child with fiancé Orlando Bloom – has heaped praise on the hospital staff who helped to bring the tot into the world during the COVID-19 pandemic.

Katy will be performing for healthcare workers and military heroes as part of Northwell Health’s Side by Side: A Celebration of Service event over Memorial Day weekend. 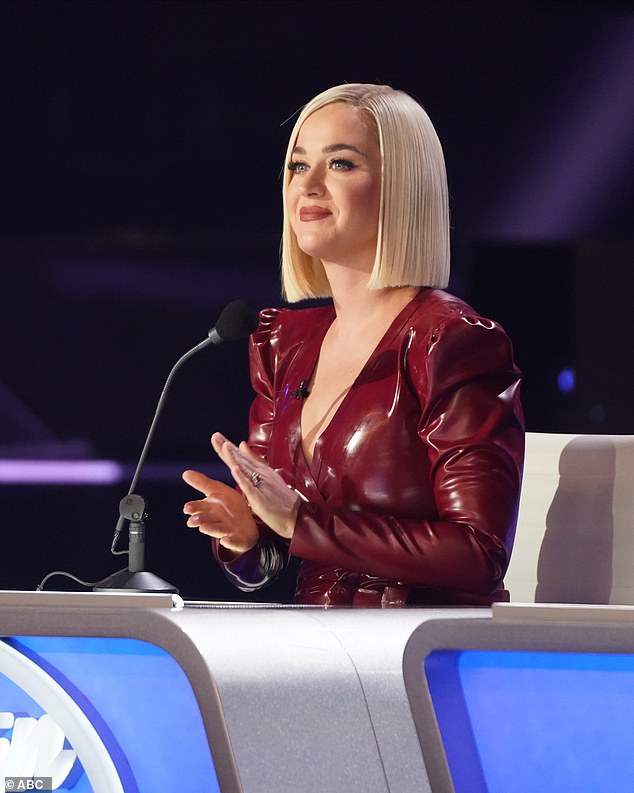 During Sunday’s episode of the show, Katy joked about cosmetic work she’s had done on her face as a contestant gave her chills ‘in places on my face that I thought I had frozen.’

Speaking to People ahead of her performance, she said: ‘[Being pregnant] was the first time I had ever experienced nurses because I’d never been to the hospital.

‘I had no idea how to surrender, but you definitely have to surrender after you have a baby. I didn’t know what I was surrendering into – I just did, and I was like, “Wow, these nurses are literally angels”.

‘I really thought it was amazing that there were actually such incredible selfless angels out there that are working in healthcare. It was so positive. They’ve been under a lot of intense stress.’

Share
Facebook
Twitter
Pinterest
WhatsApp
Previous articleThomas Friedman reveals that what keeps Joe Biden up at night is the fear that ‘he may not be able to reunite America’ – twitchy.com
Next articleZendaya, Mary J. Blige & More Honored

Who is Wheein from Mamamoo K-pop girl group? Wiki Bio Jung Whee-in, better known by her stage name Wheein, was...

Martha Kalifatidis has made a rare appearance after months of staying offline due to a mystery illness.  The former reality...

Fulham are set to strike a deal...

Roland Pollard is a well known TikTok star and Entrepreneur from the United States. Roland has motivated millions with...

Who is Wheein from Mamamoo K-pop girl group? Wiki...
News

Martha Kalifatidis has made a rare appearance after months...
Business

Roland Pollard is a well known TikTok star and...
Entertainment

Nadjaya Delgado is a renowned TikTok star from the...
News

The Babylon Bee CEO Seth Dillon and the most...
Bio