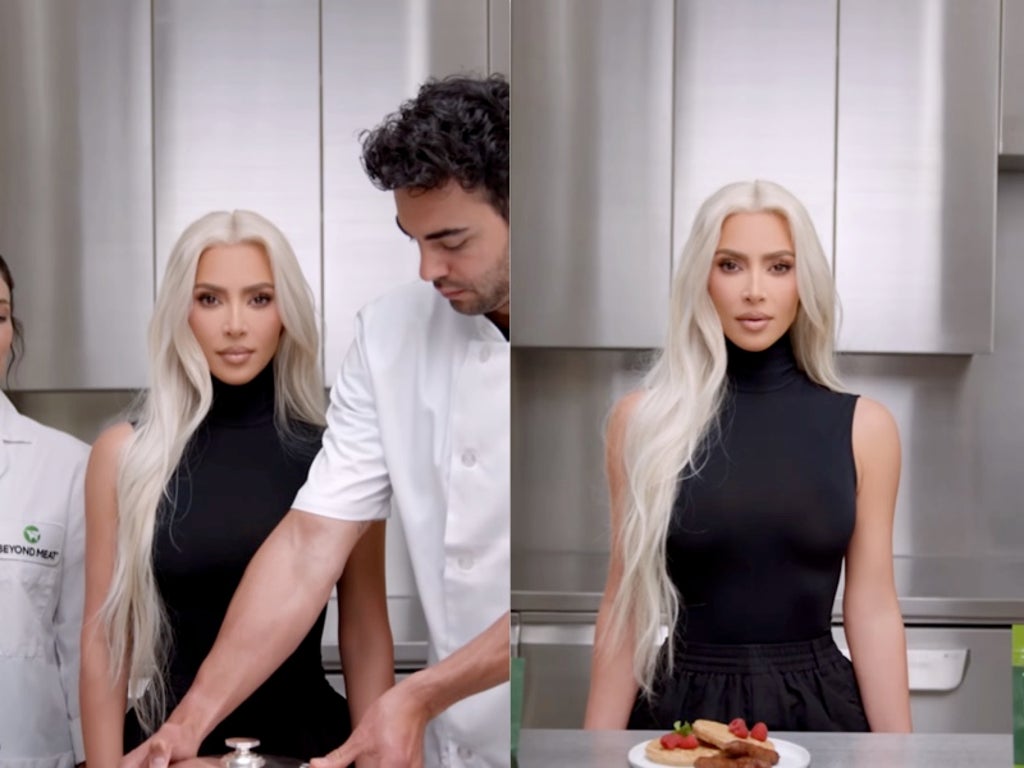 Kim Kardashian has been tapped as Beyond Meat’s “chief taste consultant” in a new campaign.

The billionaire business mogul teamed up with Beyond Meat on 24 May to promote the plant-based burger maker’s wide variety of meat substitute products. The partnership will see Kardashian sharing her favourite plant based recipes and Beyond Meat products in the brand’s newsletter.

“I believe so much in the mission of Beyond Meat that I’ve stepped in to help with my greatest asset – my taste,” Kardashian jokingly said in a video posted to her Instagram. “This plant based meat is not only amazingly delicious but it’s also better for you and better for the planet.”

In the clip, Kardashian sported her new bleach blonde hair while wearing an all-black sleeveless turtleneck and high-waisted pants. The reality star is seen standing in a modern kitchen as two chefs offer her various Beyond Meat dishes to test out.

“It’s a simple change that makes a really big difference,” she added. “Now that I’m Beyond Meat’s Chief Taste Consultant, there’s never been a better time to go beyond.”

The 41-year-old SKIMS founder has maintained a mostly plant-based diet throughout the past two years. Kardashian has been known to share pictures of her walk-in refrigerator stocked with organic produce, and has provided updates about her diet and fitness routine to social media.

In 2021, Kardashian previously teamed up with Beyond Meat to cook vegan tacos for her sister Kourtney Kardashian’s lifestyle blog, Poosh.

In episode one of the new Hulu reality show The Kardashians, Kim is seen filling her plate at a family barbecue, remarking to the cameras that she’s only vegan sometimes.

In a statement with Beyond Meat, Kardashian said she is inspired by the brand’s mission to provide accessible plant based meals that benefit the planet. “I am really inspired by Beyond Meat’s mission and love that they are not only making plant based eating delicious and accessible, but are doing so in a way that benefits both people and the planet,” she said. “It’s empowering to know that the small changes I’m making for my family, like incorporating more Beyond Meat into our meals, can add up to make a big impact.”

The mom of four also shared that her children – North, eight, Saint, six, Chicago, four, and Psalm, three – are all fans of the meat-substitute company, especially its Beyond Beef taco recipe, the Beyond Burger, and the Beyond Chicken Tenders.

“As my fans know, my fridge and freezer are fully stocked with Beyond Meat’s products and I’m so thrilled to be featured in the campaign as its Chief Taste Consultant to inspire people to include Beyond Meat in their diets.”

Share
Facebook
Twitter
Pinterest
WhatsApp
Previous articleDavid Harbour Wife Lily Allen: Actor Ethnicity – Learn About His Parent Origin
Next articleWho was David Genaro and what was his cause of death? Tributes Pour In As “James Bartlett TV character” dead at 55

Singer Adele brought her packed London gig to a halt on Friday several times to help fans in the...
- Advertisement -

A jury found a vegan mother guilty of murder...
- Advertisement -