The price of a puppy has dropped by 40 per cent after hitting a record highs during the pandemic as families across the country rushed to get lockdown companions.

The puppy mania fuelled by multiple Covid lockdowns in the UK drove average prices up to £2,237 last year but the demand for puppies has started to recede, according to the latest data from pet experts Pets4Homes.

One of the main reasons for the drop in price is the surge in the number of hobby breeders, fuelled by people now working from home and having more time to tend to litters, Pets4Homes found.

The average price between January and April this year has fallen by almost £1,000 and now sits at £1,329 as the country returns to normal following months of strict Covid measures, while the price of cats has declined by just 20 per cent

Demand – measured by prospective buyers per pet – fell by 42 per cent in January to April compared with the same period last year, according to the report by Pets4Homes, the UK’s largest online pet marketplace.

The number of would-be buyers per puppy or dog advertised on Pets4Homes in April 2022 was 168, down from more than 300 at the start of the pandemic – a drop in demand of 44 per cent. 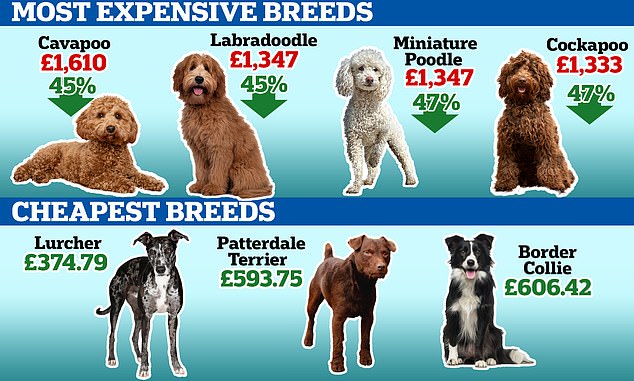 The price of a pet puppy has dropped by 40 per cent after hitting a record highs during the pandemic as families across the country rushed to get lockdown companions. Pictured: The most expensive and cheapest breeds and the price difference compared to this time last year

Experts have found that the vastly different circumstances during and after the pandemic, where most people have been working from home, seem to have given hobby breeders the time necessary to be able to breed a litter.

Dogs remain the most popular pet, attracting 63 per cent of all buyers, according to the study, followed by cats  at 15 per cent, rabbits at 6 per cent, rodents at 5 per cent and birds with 4 per cent.

The Golden Retriever revealed as the most sought-after dog, with 717 potential buyers for each advertised puppy.

The Devon Rex has overtaken the Siberian as the most sought-after cat, with 416 buyers per advertised kitten. 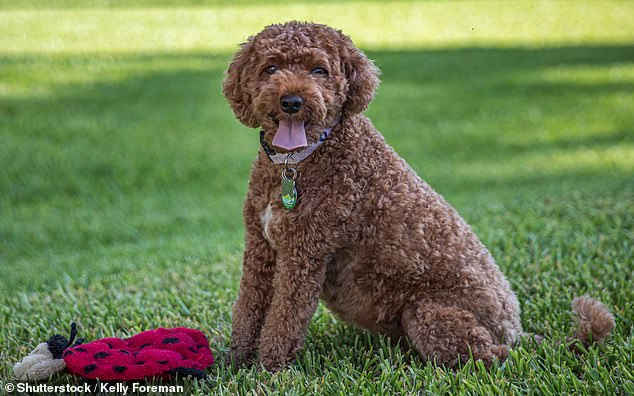 Pictured above: Cavapoos are currently the breed with the highest average price at £1,610

Lee Gibson, UK managing director at Pets4Homes, said: ‘For years, the UK has suffered from a chronic undersupply of puppies and kittens that has failed to meet the demand for pets, in particular during the height of the pandemic.

‘Inevitably, this discrepancy has enticed unscrupulous sellers and those involved in the low welfare and illegal puppy trade to profit from people’s desire for a furry companion.

‘We are glad that we are finally seeing these trends reverse with a rise in breeding by UK hobby breeders while demand is normalising.’

Mr Gibson said fears that the surge in pet ownership during Covid-19 would lead to people giving away their ‘pandemic puppies’ had not been realised, with data showing that the surge of advertisements on Pets4Homes could be traced to new litters rather than reselling.

In the early days of the pandemic, there were fears thousands of puppies would be abandoned by owners who had not fully considered their purchase.

Between October and December 2020, more than 1,800 people have called the Dogs Trust wanting to hand over dogs aged under one year old. 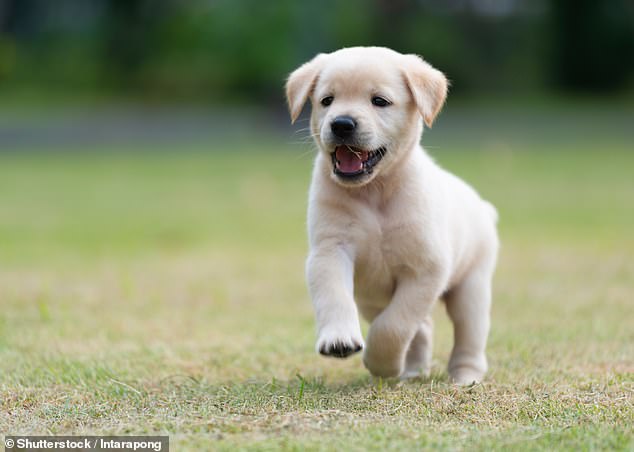 The charity said it received 114 calls on December 27 and 28 alone, including for 19 puppies under nine months old.

Further research by the Kennel Club found that one in five owners who bought a puppy during the pandemic had not fully considered the long-term responsibilities.

It found that a quarter of new owners admitted ‘impulse buying’ their puppy in the first months of the pandemic.

Commenting after the Pets4Home report was released, the RSPCA said the signs of the impact of people returning to work and the cost of living crisis were starting to show.

David Bowles, head of public affairs, said: ‘At one extreme, we have seen little rise in the number of horses being abandoned compared to a near doubling of rabbits entering our care since last year and the start of an increase in dogs entering our care in 2022.

‘This may be the prelude to dogs being abandoned as people return to the office and go on holiday and as people realise the massive commitment of owning an animal and the impact of the sudden cost of living rises we are witnessing.

‘More than ever the sector needs to work together on sustainable solutions to all these problems.’

A woke news reporter working for The Guardian’s US website has been condemned  after she took to Twitter to...

Follow us on Telegram for the latest updates: Over a hundred people waited outside The Cathay at 7:20pm...
- Advertisement -

One man is dead after a jet truck exploded...
News

A gunman who opened fire inside a Danish shopping...
News

The Jersey Shore would not be the same without...
News

A woke news reporter working for The Guardian's US...
News

A woke news reporter working for The Guardian's US...
News

A strong odour led police to find at least...
News

Ron DeSantis fired back on Sunday at Gavin Newsom’s...
- Advertisement -