A man who put an ‘awful’ blockade on the road in front of his house is now scheming new ways to deter people from parking on the street after his elaborate homemade measures were removed.

Derek Woodacer has been battling with parents doing the school run at St John’s Primary School in Tyldesley, Greater Manchester, for years as he believes they shouldn’t be parking on his street.

The 65-year-old has even been in conflict with his own neighbours over this issue, with one saying the blockade could have prevented emergency vehicles and binmen getting through.

Mr Woodacer has become notorious on Commonside Road, Mosley Common, as a result of this three-year battle. 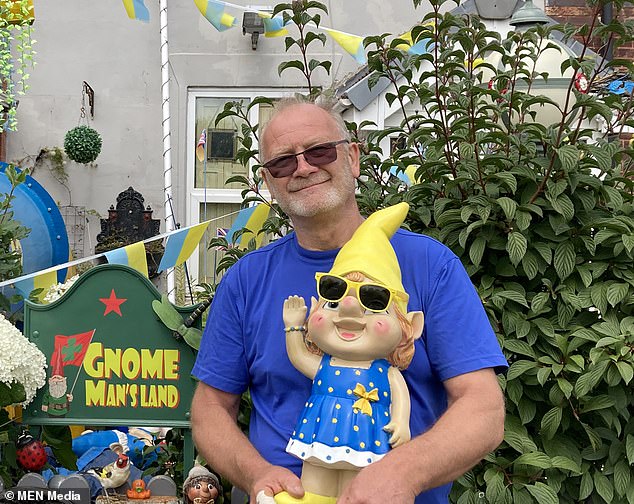 Derek Woodacer, pictured, has been battling with parents doing the school run at St John’s Primary School in Tyldesley, Greater Manchester, for years as he believes they shouldn’t be parking on his street

The dispute has led to fights, vandalism, complaints and huge financial cost, according to Mr Woodacer.

Mr Woodacer said: ‘I moved here five years ago and this is an unadopted road so the council is not responsible for it. When I moved in I thought: “What the hell is this?”

‘The first week I saw a lot of people parking from the school. I felt a lot of abuse from parents when I told them they couldn’t park there. We have to pay to repair the road and it costs thousands.

‘I met every resident on the road and they told me about all the problems. There have been assaults and property damage and we wanted to get this sorted.

‘People who were walking past them were admiring them. They were saying “wow”.

‘They [Wigan Council] tried to force me to remove the stuff from the highway two months ago. That is when I got the notice.

‘Then it was July 19 when they came to remove it. Where that leaves me now is that I was happy to have the money [gained from selling the stuff used in the blockade].’

Mr Woodacer is an avid collector and came across some gas canisters and other objects, which he put on the road to form a barricade.

Some of his neighbours have a different opinion on the matter. Many on the street do not believe the parking is too bad and see Mr Woodacer as the problem, not the parents at the school.

Ruby Howard, who has lived on Commonside Road all her life, believes that Mr Woodacer’s passion has led him to go too far.

She said his shenanigans in the early hours have given people sleepless nights.

Ms Howard, 24, said: ‘Originally our road is unadopted and we own up to halfway on the road to the middle of the street and we have the school at the end. For 16 years we have always had a back and forth [with the school]. 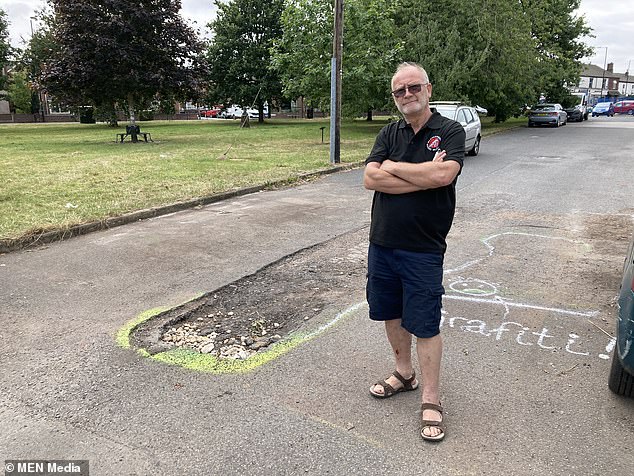 ‘We all paid for it to be resurfaced, the parents driving up and down and he took it upon himself to put barriers in. That has led to arguments with parents.

‘He buys and sells for a living and he started using the space to leave his stuff. It looked awful.

‘I contacted the council and have been trying to get it removed for two-and-a-half years. It got to the point where emergency vehicles and binmen couldn’t get through.

‘Once he was told to remove the plate he started to dig the pothole even more. It has been stressful, people on the street have sleepless nights.

‘At first he was alright and wanted to help with the road, I think he got a bit too passionate. He sacked everyone off and wanted to do his own thing.’

Another neighbour, who wanted to remain anonymous, gave an insight into what it has been like living next to Mr Woodacer.

She said: ‘He started first by tackling the parking by the school, he puts gas canisters in the road. It is minutes they are there dropping off, people understand and would rather children get [to] school safely.

‘He has blocked the road before, has fights with neighbours, his mouth is disgusting. Police and council were here for hours when it was getting removed.

She added:  ‘He wants the attention. He made the hole bigger. He is known in the area. He said he is going to antagonise the whole street.

‘It’s draining. I’ve never known anything quite like it.’ 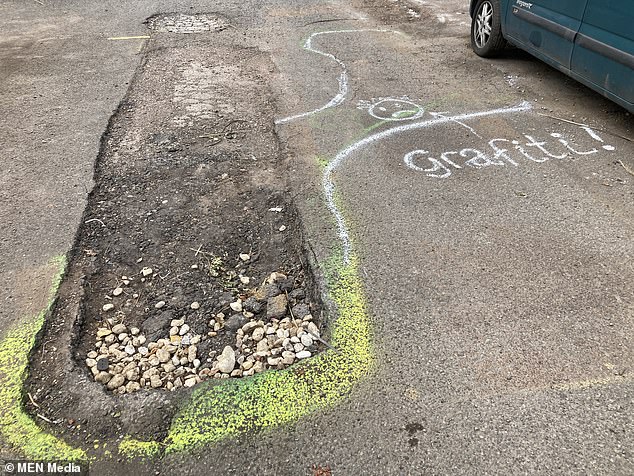 Mr Woodacer said: ‘I have upset enough people. But I just don’t care now. I don’t know where this leaves me with the neighbours now. This just makes me more determined to carry on’

Mr Woodacer has vowed not to be deterred by the opposition from the authorities and his neighbours.

He has big plans for the future and is even looking to memorialise one of his favourite locations in the world, Lake Como in Italy.

Mr Woodacer said: ‘I have more plans in the future. The pothole now, I am going to make it into Lake COMOnside.

‘I have upset enough people. But I just don’t care now. I don’t know where this leaves me with the neighbours now. This just makes me more determined to carry on.’

Paul Barton, director for environment at Wigan Council, said: ‘Following this issue being reported, we have worked with the resident to resolve the situation. The structures were removed, with the support of the resident, on July 19.’

A spokesman for Greater Manchester Police said: ‘I can confirm that at around 8:30am on July 19, officers received a report of breach of the peace on Commonside Road. A man had blocked the road and obstructed drivers.

‘Officers and the council attended the scene and removed all obstacles.’

Cardi B shared a screenshot of explicit text messages she and husband Offset recently sent...

Sasha Obama was spotted flashing her tattoo as she...
- Advertisement -