A murder-accused ‘freaked out’ and stabbed his work mentor to death after waking to find the man rubbing his penis on him, a NSW jury has been told.

Filipino man Jesus Bebita, 41, was found in pool of blood on the bathroom floor of his Scone flat in December 2018, with 49 stab wounds to his head, back and hands.

Jamie Cust, who was 21 at the time of the attack, has pleaded not guilty in the NSW Supreme Court at Newcastle to murder, after turning himself in to police in the hours after the attack, tearily telling them Bebita had tried to rape him. 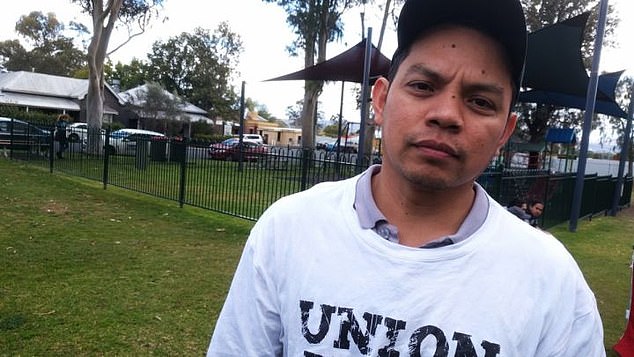 Jesus Bebita (pictured) was found in a pool of blood on the bathroom floor of his Scone flat in December 2018 with 49 stab wounds to his head, back and hands

When outlining the case in his opening address on Wednesday, the crown prosecutor Brendan Queenan said the jury would hear evidence the men were ‘good mates’ and had worked together at an abattoir in Scone, JBS Meatworks.

The pair had arranged a night of drinking before Cust returned to Sydney where he was due to begin his apprenticeship as a chef that week.

They visited a bottle shop in Aberdeen, and took selfies together around 9pm before the night turned sour sometime between about 11pm and 4.14am the next morning, when Cust tried to call his stepfather Vivian Price, the prosecutor said.

‘As soon as Vivian answered the phone … Mr Cust sounded hysterical, and was crying,’ he said.

When his stepfather arrived to pick him up, Cust told him he had stabbed Bebita because he tried to rape him.

‘He said he woke up, his pants were down and (Bebita) was rubbing his dick on him,’ he said.

Cust told him he had stabbed Bebita, and thought he was dead, before lighting a doona on fire and fleeing the unit.

‘Jesus mate, if you’ve done that the best thing you can do is go to the police,’ Mr Price said he’d responded.

‘He just didn’t want to go to jail,’ Mr Price told the court.

After Cust had stuffed his bloodied clothes into garbage bags and pondered fleeing the country, Mr Price said he finally convinced him to go to the police.

Cust repeated his story to detectives. 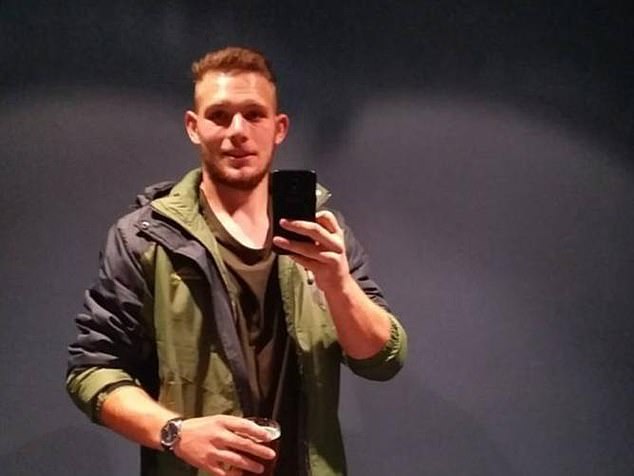 ‘I woke up, and we were in bed together, and he was touching my penis, and I freaked out,’ the court heard he told officers at Muswellbrook police station.

Cust was seen by a sexual assault nurse, and a series of tests conducted, during which no genital injury was noted and no semen detected, Mr Queenan said.

Cust’s lawyer, Paul Rosser QC, told the jury it should find him not guilty of murder, but consider the lesser charge of manslaughter.

‘Mr Bebita suffered what can only be described as a frenzied attack.

‘There is a clear evidence that (Cust) lost control of himself.’

Something ‘very significant’ must have taken place for that to happen, he argued. Bebita was ‘something of a mentor’ to Cust.

‘Ultimately, using common sense … it is probable that something caused him to lose self-control and it’s probable that it was what he, the accused, said it was.’

The ultimate issue for the jury will be whether the Crown could prove beyond reasonable doubt that Cust was not acting under extreme provocation, Justice Helen Wilson said in summary.

The trial continues on Thursday.

Share
Facebook
Twitter
Pinterest
VK
WhatsApp
Previous articleThe Morning Briefing: Drunk Uncle Biden Struggles with English, Truth at Town Hall
Next articleTwitter Is Conducting Research On Replies By Allowing Some iOS Users To React With An Up Or Down Vote

A couple has transformed the garden of their £240,000 new-build home into a tropical paradise inspired by their holidays...
Crime

Police forces dumped more than 1,000 crimes a day during pandemic within 24 hours