Somewhere inside a glitzy show lay a half-decent race, and as the chequered flag was waved on a sultry Floridian afternoon Max Verstappen proved himself a worthy winner.

While the scriptwriters may have preferred Lewis Hamilton capping this inaugural Miami Grand Prix spectacular with victory, the British superstar began and finished sixth – further proof that his Mercedes is out of the running even with a long-time superman at the controls.

So Verstappen was celebrating his third triumph in five races at the start of his title defence, and the sport itself was toasting an occasion they had so long dreamed of – cracking America. 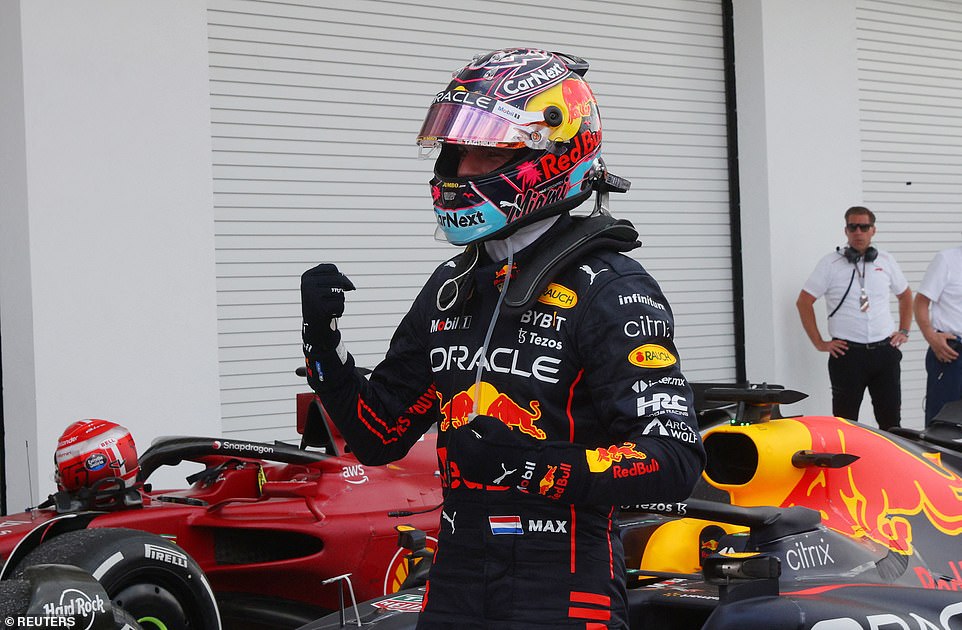 If there was any doubt of that you should have seen the maddest, tallest, blingyest, most diverse grid parade Formula One has ever known. This was the day the old game unhooked itself off the coattails of its European heritage and stamped its foot in the land of the brave.

Men with eight F1 world titles between them, going by the names of Emerson, Jackie, Mario and Mika, were lost in the forest of giants from sport and celebrity.

Only one contemporary driver held cut-through allure to the American public, and his official title is Sir Lewis Hamilton. Cameras turned on him like a rare tiger on safari as he walked about the paddock. The rest of the F1 cast were bit-players in a new world.

Europe will remain the heart and soul of Formula One, Monaco in its faded glory its most totemic emblem, but room has been found in its heart for this kind of extravaganza. Miami 2022 was a glimpse of a freer, cooler future.

Hamilton, wearing giant pink shades of which Dame Edna would have been proud, said: ‘The vibe here is amazing. The crowd is the best.’

He already knew his chances of triumph could be rated between slim and zero. His start did not help. Out of his box fast, yes, he locked up into the first corner, lost momentum, and slipped two places.

He soon zipped past Alpine’s Fernando Alonso and then AlphaTauri’s Pierre Gasly. The fact he was half a minute back after 22 of the 57 laps told of his struggles. It was a far cry from his six career wins in the States, one at Indianapolis and the rest in Austin, where he also clinched two of his seven world titles.

At least the Americans were treated to a little bit of on-track drama to excuse the hype. McLaren’s Lando Norris clipped Gasly and his tyre blew. The Briton apologised for his error. A shame — he has been acquitting himself very well this year.

The safety car interruption allowed Hamilton’s Mercedes team-mate George Russell a free pit stop, bumping him up to seventh and right on his senior partner’s tail.

On fresher rubber, Russell’s threat was always going to be too much to resist and so it proved. He found a way past on lap 50 to finish fifth.

Russell has now finished ahead of him in every race bar one this campaign. Luck has conspired against the fine champion, but this setback will hardly have helped his mood. Barcelona comes next a fortnight hence.

It was left to Verstappen to be the star of the day, confirming the form he demonstrated in a dominantly mature weekend in Imola last time out.

Here, he placed himself right on pole-sitter Charles Leclerc’s Ferrari down the start straight to hold the inside line at the first corner and take the lead at the beginning of lap nine. He had taken the other red car, belonging to Carlos Sainz, at the start.

So it finished: Verstappen, Leclerc, Sainz — but only after Verstappen withstood Leclerc’s hot breath after Norris’s crash. It was a good display of front-running.

The circus returns to America for the Austin race on October 23, when there will be a more intimate feel both at the track and in the compact downtown area of the Texan city, with its cheek-by-jowl bars and restaurants.

It will also attract a more petrolhead crowd than the one partying away here.

Then next year comes Las Vegas, the third of the US trio that will host Formula One for the foreseeable future. The Strip will try to out-dazzle Miami. They will have to go some if they are to succeed.

Not that Florida’s Formula One pioneers are worried by competition. As Tom Garfinkel, chief executive of yesterday’s race said: ‘Vegas joining the calendar is fantastic because all ships rise with the rising tide.’

Jacqueline Jossa was pictured having what appeared to be...

You didn't have to be a supporter of West...

A pregnancy center in Baltimore was allegedly vandalized with threatening messages over the weekend as pro-abortion supporters took to...

A pregnancy center in Baltimore was allegedly vandalized with...
Celeb Zone

Society scammer Anna Delvey is continuing to try and...
News

After escaping the Taliban's clutches, Bashir and Kassim Mohammed...
Bio

3 Shot And Killed In Milwaukee Following Night Of Violence