Maya Wiley’s campaign team has been forced to deny that she intends to disarm NYPD cops after the New York mayoral candidate refused to commit to a position during a debate.

Speaking with the top five Democrat candidates on Thursday, Wiley said she was ‘not prepared to make that decision in a debate’.

After the debate, her campaign tried to clear up her answer, with spokesperson Julia Savel telling Politico: ‘It’s a ridiculous question; no one is even discussing taking guns away from cops — clearly Maya wouldn’t.’ 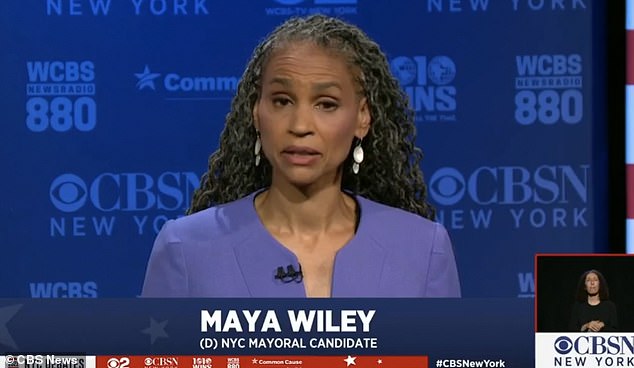 During Thursday’s debate among the top five Democrat mayoral candidates, Wiley was pushed on the issue of arming cops.

CBS2 reporter Marcia Kramer asked: ‘Attorney General Letitia James is proposing legislation to limit cops from firing their weapons, use of force as a last resort.

‘Some might ask, why not go all the way and take away the guns altogether like they do in 19 other countries where the bulk of the police force is unarmed.’

But Wiley initially dodged the question as she refused to commit to an answer on whether to remove cops’ guns. 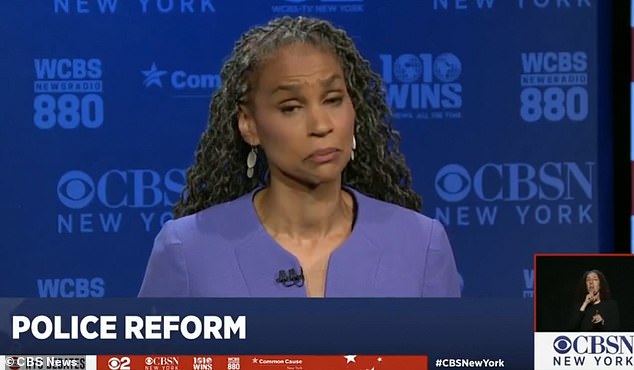 Speaking with the top five Democrat candidates on Thursday, Wiley said she was ‘not prepared to make that decision in a debate’ 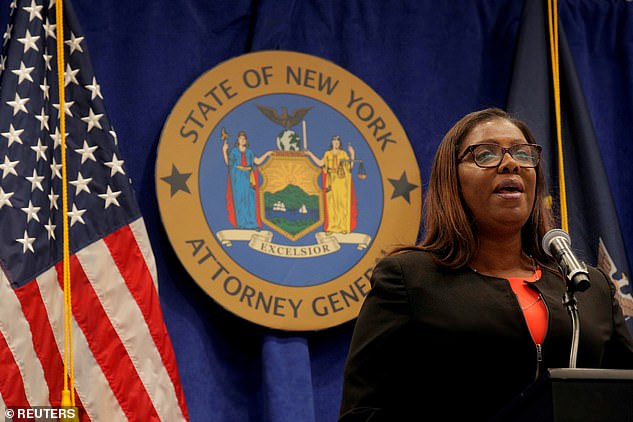 Wiley presents herself as a reformer, and advocates cutting one billion dollars from the NYPD’s budget and reform how the department operates.

A former de Blasio administration official and Civilian Complaint Review Board Wiley said: ‘Well, look, one of the things we have to do is acknowledge that the Mayor’s job is safety — safety is job one and I’m going to keep New Yorkers safe when I’m mayor.’

Kramer then probed again if she would take away guns but Wiley continued: ‘That does mean we want smart policing. I think we know that we have a problem with illegal guns coming into this city.

‘We have the strongest gun control laws in the country, the issue is how they’re coming in. 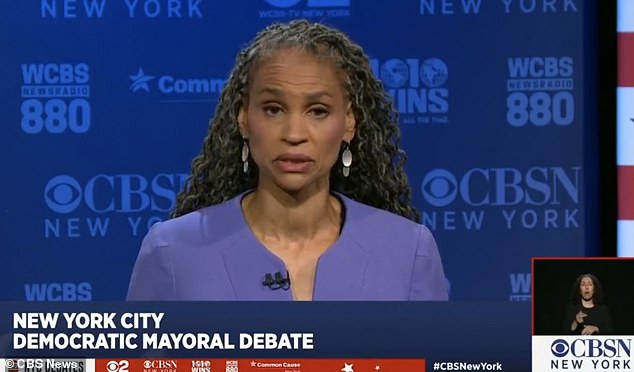 During Thursday’s debate among the top five Democrat mayoral candidates, Wiley was pushed on the issue of arming cops

‘We do want a police department that is focused on keeping them out of the city and off our streets.’

Kramer then asked a third time: ‘But will you take the guns away from the NYPD.’

Wiley, who has been endorsed by Alexandria Ocasio-Cortez and Elizabeth Warren, responded: ‘I am not prepared to make that decision in a debate. 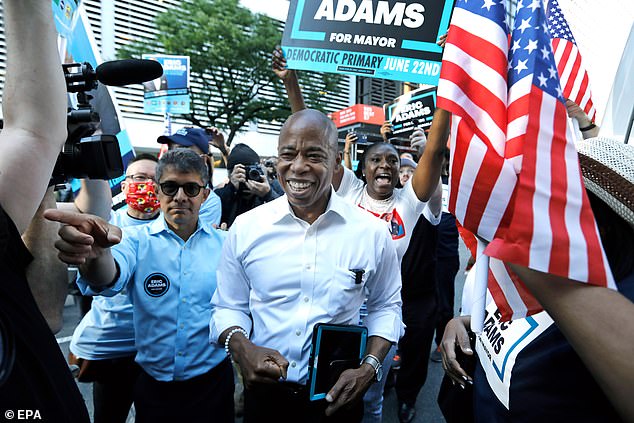 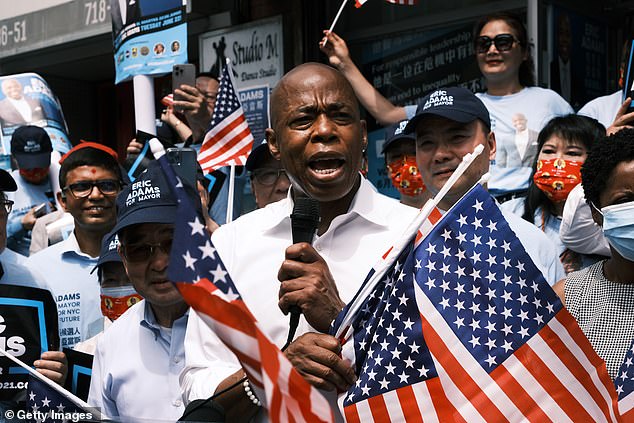 Polling has shown crime is the top issue among likely primary voters. Compared to last year, instances of many major crimes are slightly down, but murders are up 12% and shootings are up 68%. When asked if police officers should continue to carry guns, almost all candidates said yes except Wiley.

Yang said: ‘My first act as mayor will be to go to the police and say we need you.’

The hour-long debate focused heavily on crime, but also touched on how the candidates would work with Governor Andrew Cuomo, regulations for legal marijuana and whether to rename landmarks that bear the names of slave owners.

Aside from issues over crime, during the debate questions were asked of candidate Eric Adams after questions arose this week about where he resides. 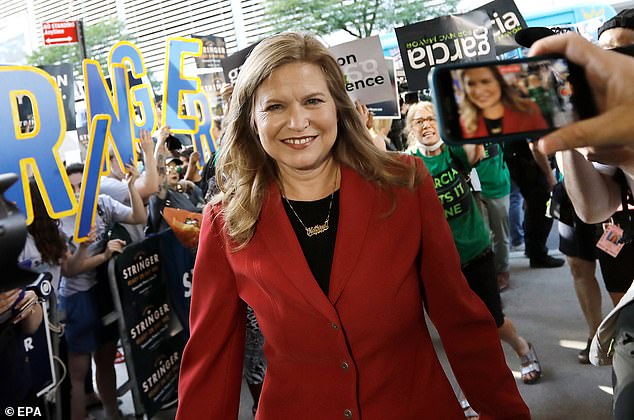 On Wednesday, Adams invited reporters to his apartment in Brooklyn in order to prove that he lived there.

‘You know what people are asking about,’ Adams said. ‘I live in Brooklyn. I live in Bedford-Stuyvesant. I am happy to be there, it is a beautiful community, that’s where I live. It’s a humble place; it’s a blue collar place but I am a blue-collar candidate. I live in Brooklyn.’

Andrew Yang, who has been a frontrunners along with Adams, attacked him hard.

‘Unfortunately his tour of the basement raised more questions than it answered for many New Yorkers, especially me,’ he said.

Adam’s responded with a fierce defense.

The debate also discussed how candidates would work with Governor Andrew Cuomo and touched upon regulations for legal marijuana. 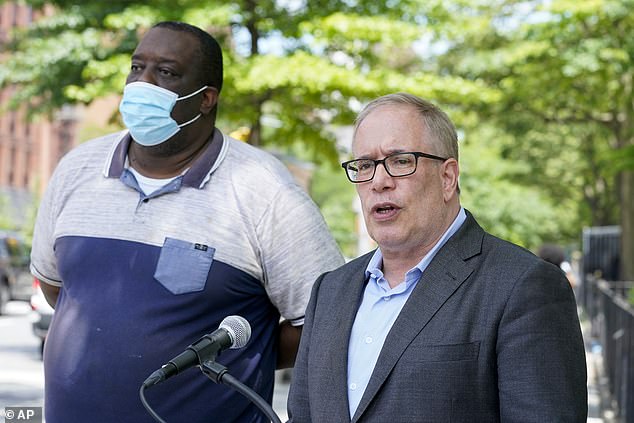 Candidate Scott Stringer was asked about a second allegation of sexual misconduct. He is pictured on Wednesday 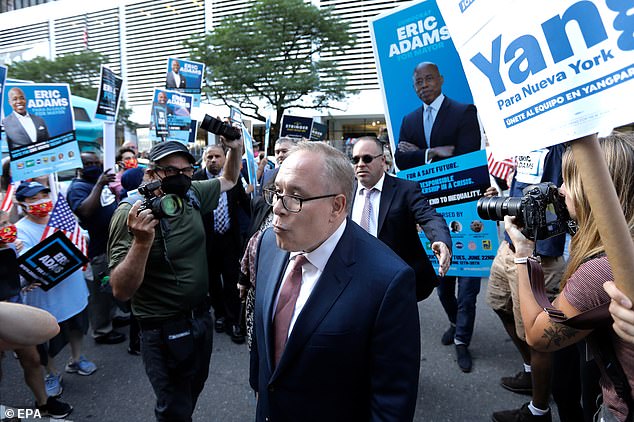 The New York Times reported last week how a woman accused Stringer, pictured, of groping her and that he made unwanted sexual advances in 1992

Candidate Scott Stringer was asked about a second allegation of sexual misconduct.

The New York Times reported last week how a woman accused Stringer of groping her and that he made unwanted sexual advances in 1992.

Weeks earlier, another woman who had worked unpaid on Stringer’s 2001 public advocate campaign made similar allegations.

Stringer said the allegations are ‘not true’ and said that he was ‘misquoted’,

‘I want to be held accountable to anyone who wishes the press or otherwise to investigate what took place 30 years or 20 years ago,’ Stringer said. 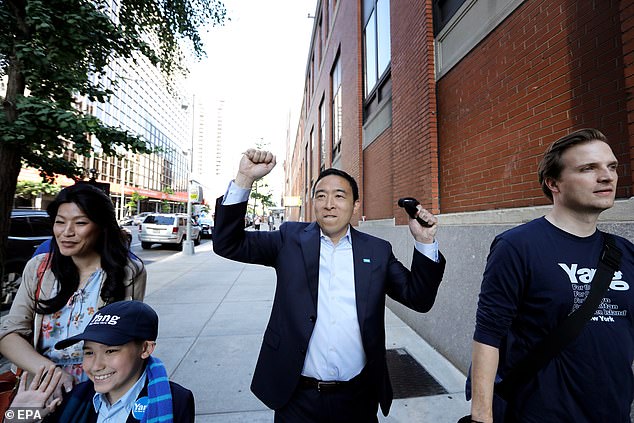 Stringer and Yang also clashed over Yang’s experience and whether he would have the right approach to working with Cuomo.

Yang said he could ‘work with ‘anyone who’s going to help us deliver for the people of New York.’

‘Your approach is naïve,’ Stringer said. ‘Albany will go after you. Albany will collapse you. You don’t understand that the forces around the state do not want us to get the funding that we deserve.’

‘The state needs the city, Scott. The city needs the state,’ Yang said. ‘It’s easier to work with someone who, again, isn’t trying to score political points (and) who just wants to get the job done. That’s the kind of leadership that the city has been waiting for for quite some time.’

Christian Horner has been accused of giving ‘racists an excuse to let fly their vitriol and evil’ at Lewis Hamilton following his criticism of the Mercedes driver after Sunday’s British Grand Prix. Lord Hain, vice-chairman of the All Party Parliamentary Group on Formula One, believes Horner will ‘regret’ the remarks he made in the wake…

Herschel Walker, the football legend and longtime pal of Donald Trump , has decided to run for the U.S. Senate in Georgia. Walker, a Texas resident with a home in Georgia, registered to vote in Georgia yesterday, which now makes him a Georgia resident. He will be challenging Raphael Warnock in 2022. Trump has been…

Born and raised in Puerto Rico, Roselyn Milagros Sánchez Rodríguez is an actress, singer, and model who is best known for the comedy-drama series ‘Devious Maids’ and CBS’ police procedural show ‘Without a Trace.’ Sánchez was passionate about dancing and acting from a young age, but she never truly followed her heart until she turned…

Getty Trent Brown To put it plainly, things didn’t work out well for Trent Brown during his one season with the Las Vegas Raiders. Not only did he appear to regress as a player, he also had an unfortunate, near-death experience that had him contemplating retirement because of the long recovery. On Tuesday, November 16,…

Barack Obama had his “scaled back” birthday party last night in Martha’s Vineyard at his $12 million, waterfront estate. But as we reported last night, all the indications were that it was anything but scaled back — and the pictures of the party that have since come out confirm that. After he got a lot…

The Woodbridge apartment looked like a fresh start: A large two-bedroom condominium with vaulted ceilings and a skylight, in-unit laundry and new kitchen appliances. It was a step up from where Tonya Wood and her daughter live in Edison.  The hallways of her 1970s apartment building smell of stale cigarette smoke and neighbors regularly dump trash outside the shared entrance. Rain leaks through a ceiling vent. It stained a brand-new…