By Kamal Sultan For The Daily Mail

They are three of Hollywood’s finest leading ladies.

So it is only fitting that Michelle Pfeiffer, Viola Davis and Gillian Anderson are starring in a drama about a trio of the most influential First Wives in US politics.

The First Lady contrasts the biographies of the three women, who were all politically active in their own right. 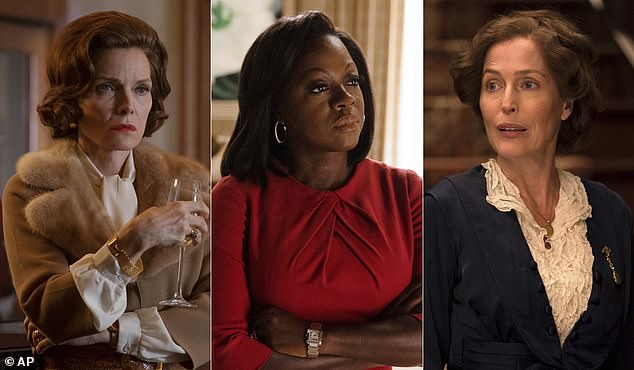 Miss Pfeiffer, 63 – star of cult classics such as Scarface and Dangerous Liaisons – plays the wife of Gerald Ford, who became president in 1974 after Richard Nixon resigned.

Oscar-winner Miss Davis, 56, was reunited with the other stars at the premiere in Los Angeles this week and revealed that she had previously met Barack Obama’s wife.

She was the first black woman in the White House built by slaves.’

Miss Anderson, 53, may hope that playing the wife of wartime president Franklin D Roosevelt will bring her awards success once more after she won an Emmy for her portrayal of Margaret Thatcher in The Crown last year.

The First Lady, made by US network Showtime, will be available in the UK this summer on streaming service Paramount Plus.