A mother has warned of the dangers of using sunbeds without safety goggles after she nearly went blind due to prolonged exposure to UV light.

Cheryl Wilson, 40, from Romford, Essex, was horrified when her optician revealed in April this year that her ‘foggy vision’ was the result of a cataract-like growth in her right eye that would have left her partially blind if it went untreated.

She was forced to have surgery earlier this month, as a result of the prolonged exposure to ultraviolet (UV) light during her bi-weekly 15-minute tanning sessions.

Cheryl is now keen to warn anyone using tanning beds of the importance of following safety procedures. 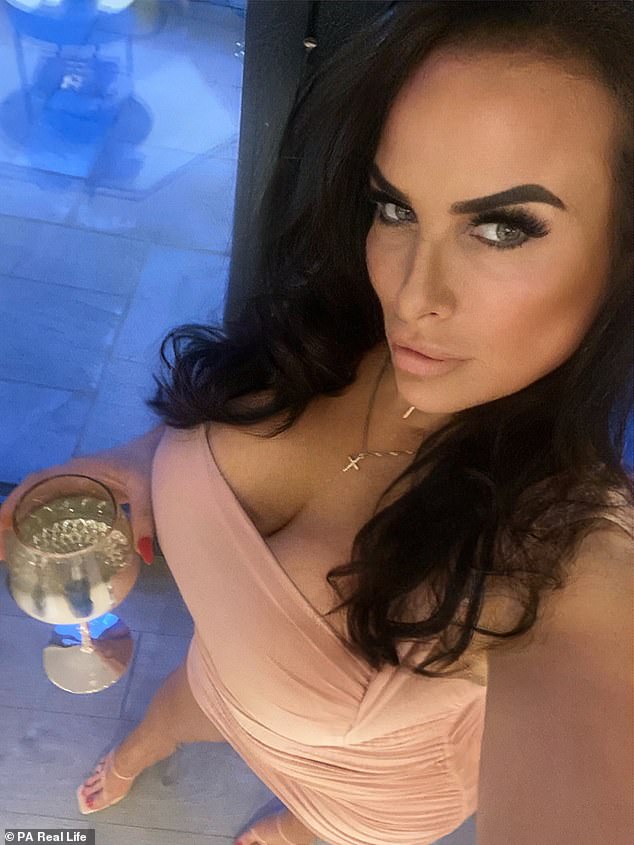 Cheryl, who is an agency boss who provides ring girls for boxing matches, is keen to warn anyone using tanning beds of the importance of following safety procedures 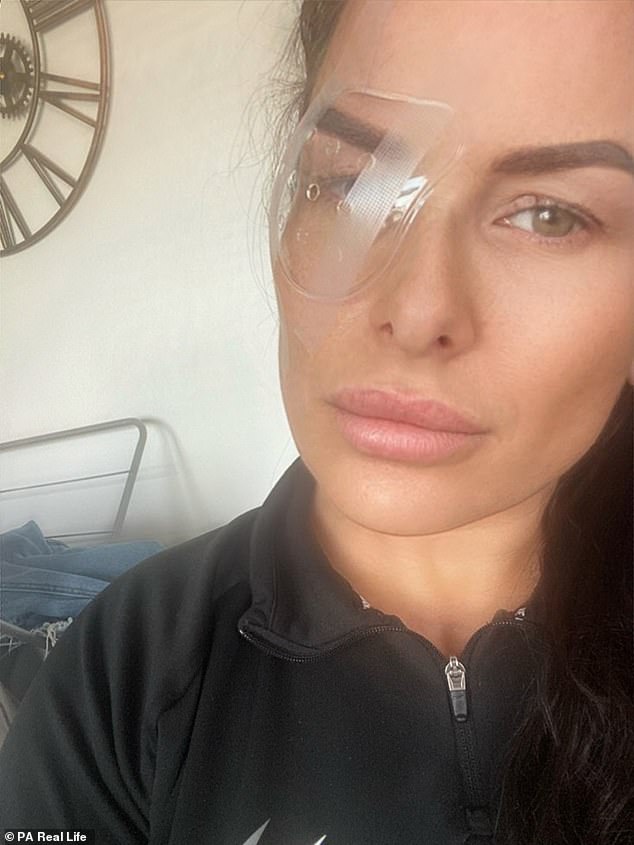 Cheryl Wilson, 40, from Romford, Essex, warned of the dangers of using sunbeds without safety goggles after she nearly went blind over prolonged exposure to UV light

The mum-of-four said: ‘Losing part of your sight is terrifying, I felt like I was in a different world.

‘I wish I’d realised the danger of using sunbeds without goggles. Now I don’t want anyone else to go through what I’ve been through.

‘I’m terrified of leaving the house and I’m filled with anxiety thinking about going out in the sun.’

As owner of an agency providing the ring girls who climb into the boxing ring between bouts, Cheryl has rubbed shoulders with champion boxers like Anthony Joshua, Frank Bruno and Joe Egan for years, and maintaining a glamorous look was part of the job. 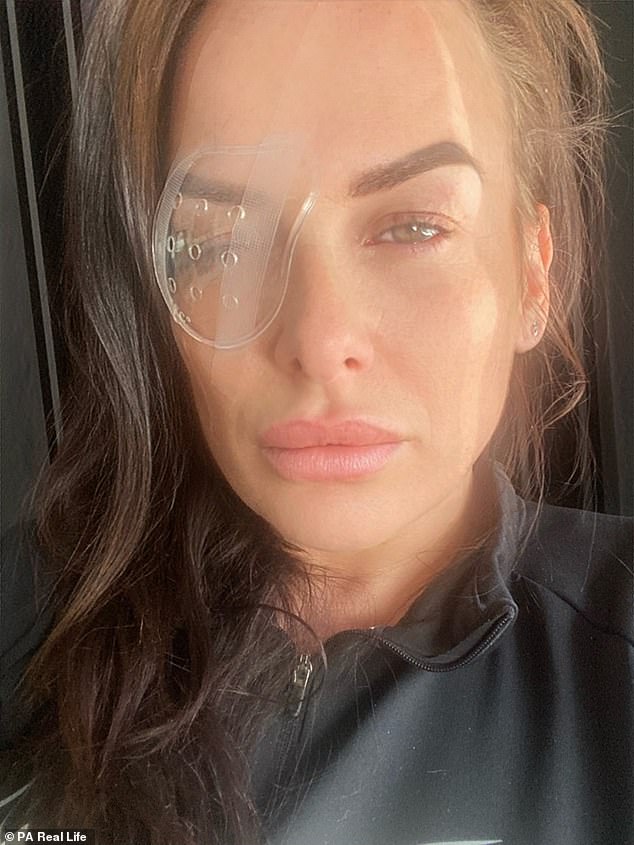 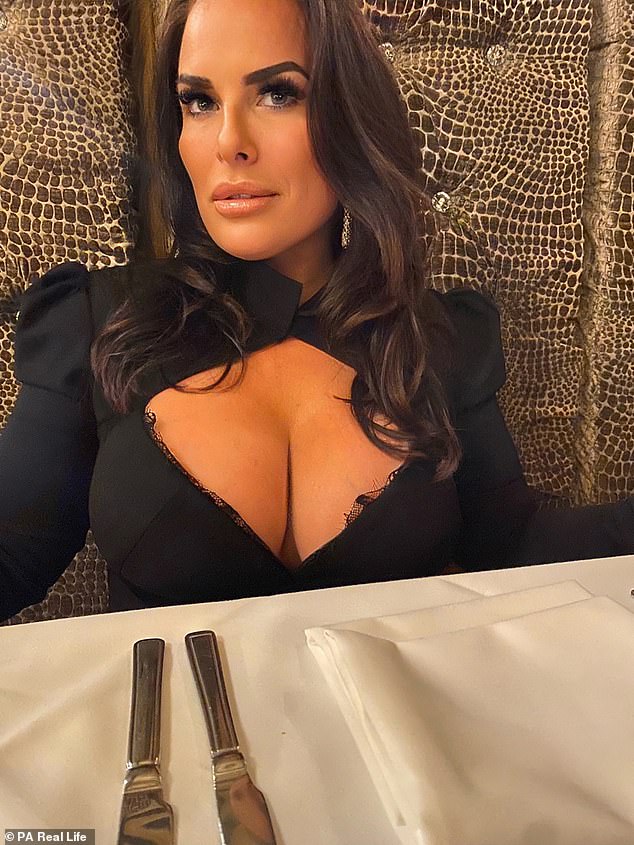 Always immaculately turned out with the perfect tan Cheryl, who is mum to Callum, 22, Ashleigh, 19, Bailey, 14, and Frankie, 12, said her lifestyle has now changed dramatically.

She said: ‘I’ve had to take a step back from my life. I have been in this industry, in the glitz and glamour and regularly on the red carpet for years, but now I can’t leave the house.

‘I can’t enjoy getting dolled up, putting a nice dress on and nice shoes, because I’m not up to it since my surgery. It’s awful. 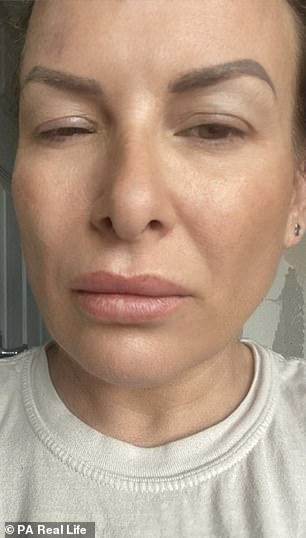 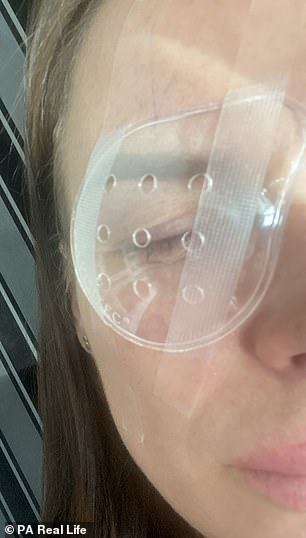 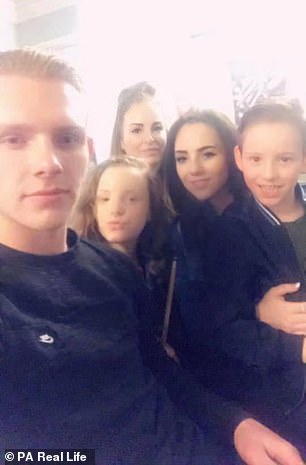 ‘I’m quite a glamorous woman, so it’s been quite hard for me, as I can’t even wear make-up for at least a month.’

Luckily, the 20-minute operation Cheryl had privately at SpaMedica in Romford to replace her right eye lens with an artificial one was successful.

But the surgery came at a far greater cost to her confidence.

She said: ‘If I hadn’t had the operation, I would have lost my sight in that eye completely within weeks as I could only see silhouettes by then. Thank God I went to the optician when I did.

‘On the day of my surgery, I was really scared, as I was on my own and all I kept thinking was that I was going to be blind. 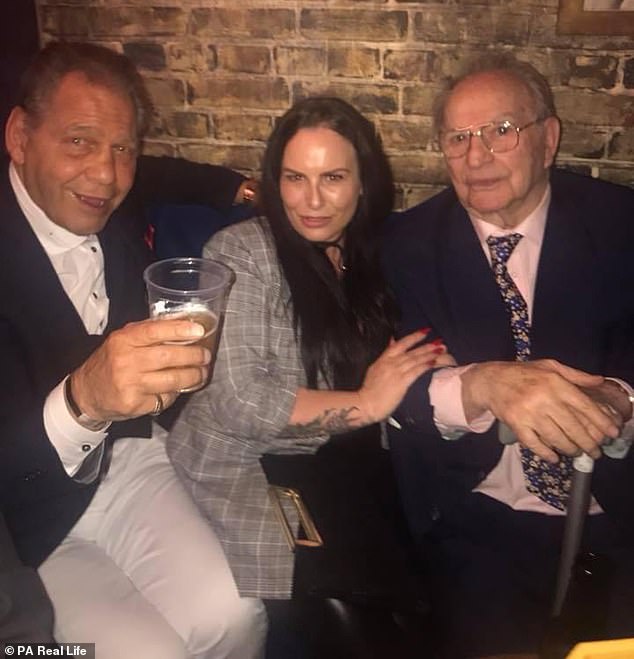 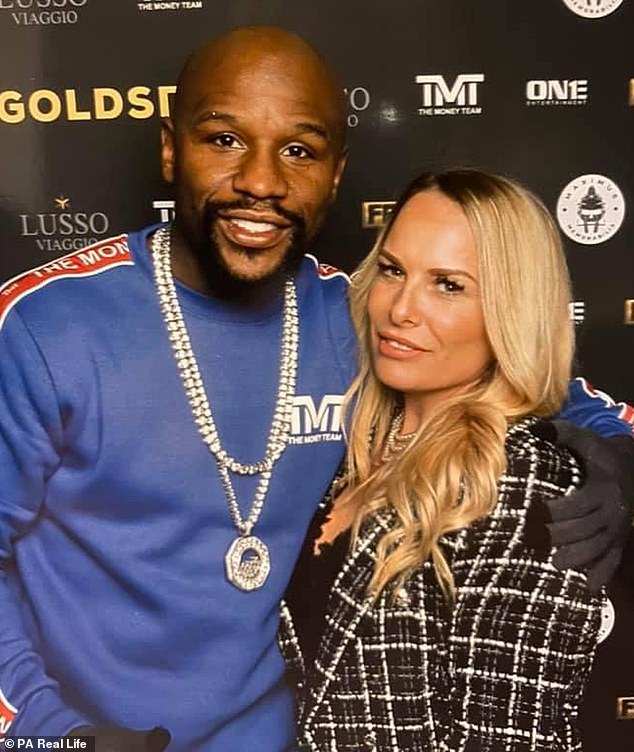 As owner of an agency providing the ring girls who climb into the boxing ring between bouts, Cheryl has rubbed shoulders with champion boxer Floyd Mayweather

‘It really scared me. I was petrified. But now I can’t wash my hair properly as I can’t get any water on my face for a month after the surgery. And I can’t wear make-up for another three weeks.

‘I have a beauty regime, so it’s been tough. I feel like my confidence has been really hit.

‘I love putting on make-up and using eyelash extensions. Now I can’t go to any events because I don’t want to go looking like this.

Cheryl had occasionally used sunbeds throughout her entire adult life, but around March this year she ramped up her visits to twice a week, because she wanted to have the perfect look in time for summer. 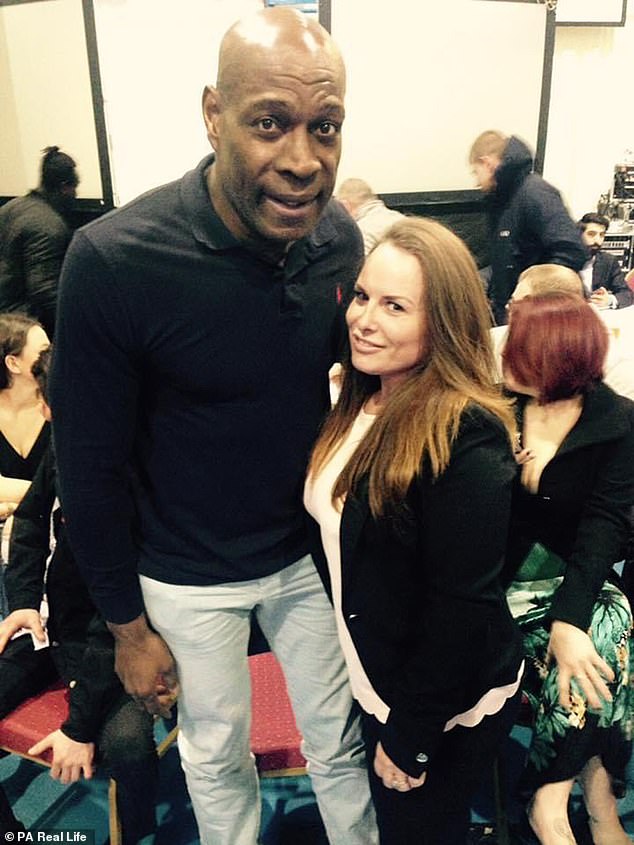 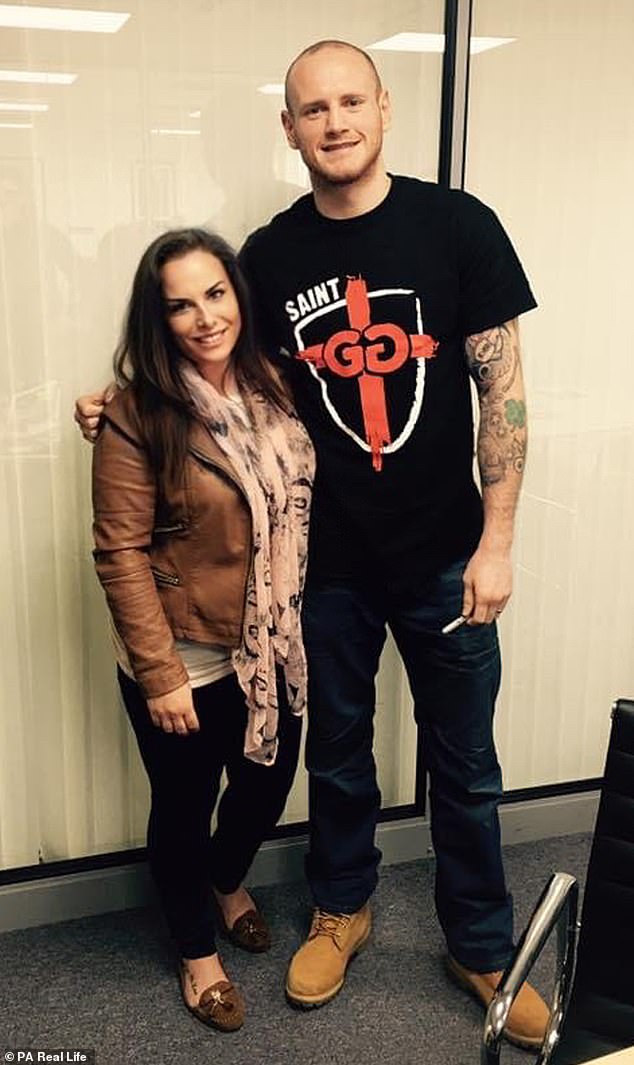 She posed with George Groves, who is a British former professional boxer who competed from 2008 to 2018

She started noticing an issue with her vision in March. Initially, she struggled to drive at night, due to the beaming lights of oncoming vehicles.

But, by the end of that month, she found even going out during the day really unpleasant, because she became so sensitive to light.

Thinking it was caused by the eyelash extensions she wore, she went to the optician thinking she would just need some eye drops.

She said: ‘I wear eyelash extensions, so I thought it had irritated my eye.

‘The blurry vision and sensitivity came and went, but then it came back after a couple of days. 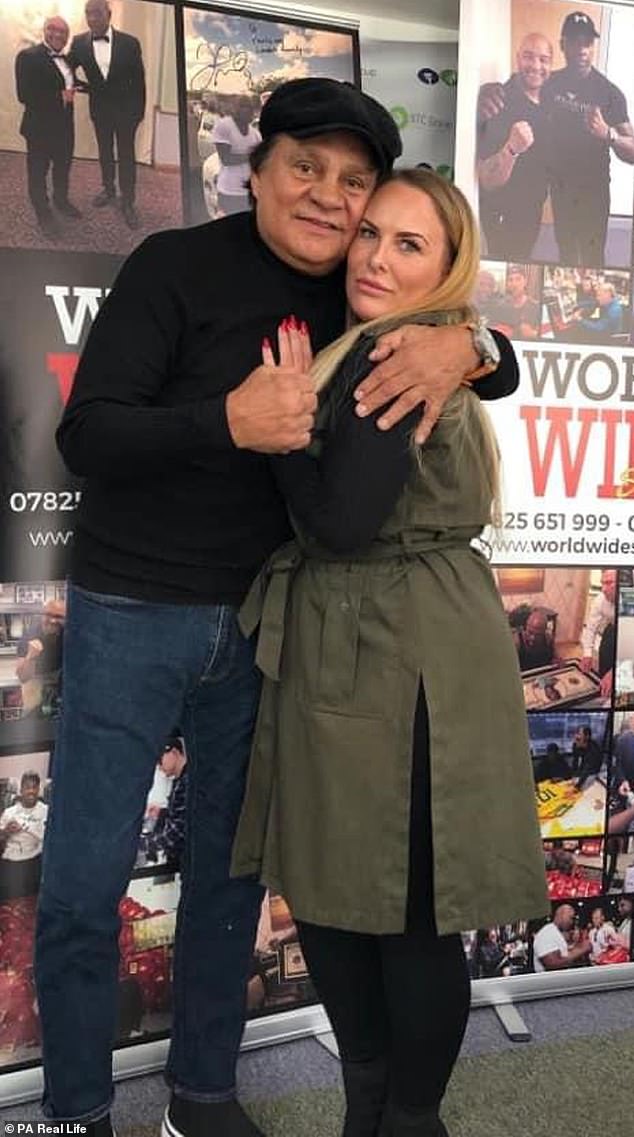 She posed for a photo opportunity with Roberto Durán Samaniego, who is a Panamanian former professional boxer who competed from 1968 to 2001

‘Then it kept getting worse and worse, to the point I couldn’t drive in the daytime or at night and I could barely even read, as the letters kept getting foggier.’

Then she was devastated when tests in April revealed she had suffered severe UV light damage to both eyes, with her right eye requiring immediate surgery.

She added: ‘I was just completely devastated. I couldn’t believe this could happen because of not wearing goggles when using sunbeds.

‘I genuinely didn’t think it was a big deal.’

The surgery was especially traumatic, despite the ‘brilliant care’ from her doctors, because she was awake throughout.

Recalling the operation, she said: ‘The surgery was horrific, I was awake throughout. I ended up crying so much because I never imagined in my life that I’d be going through this.

‘They clamped my eye open and I was just watching it all happen. I was panicking.

‘Emotionally and mentally it was really draining, and I just wish I’d realised what I was doing when I decided not to wear the goggles.’

While Cheryl is grateful that her vision was saved, she says she will have to face the consequences of not wearing goggles for the rest of her life.

She added: ‘I’m never going on a sunbed again and I feel incredibly nervous to go anywhere hot where the sun’s out, because I don’t know how much more damage my eyes can take.

‘I’ve become so anxious and worried all the time.

‘Any plans to go to Spain or to a beach have been cancelled until I find out how my eyes are. I have to be careful. 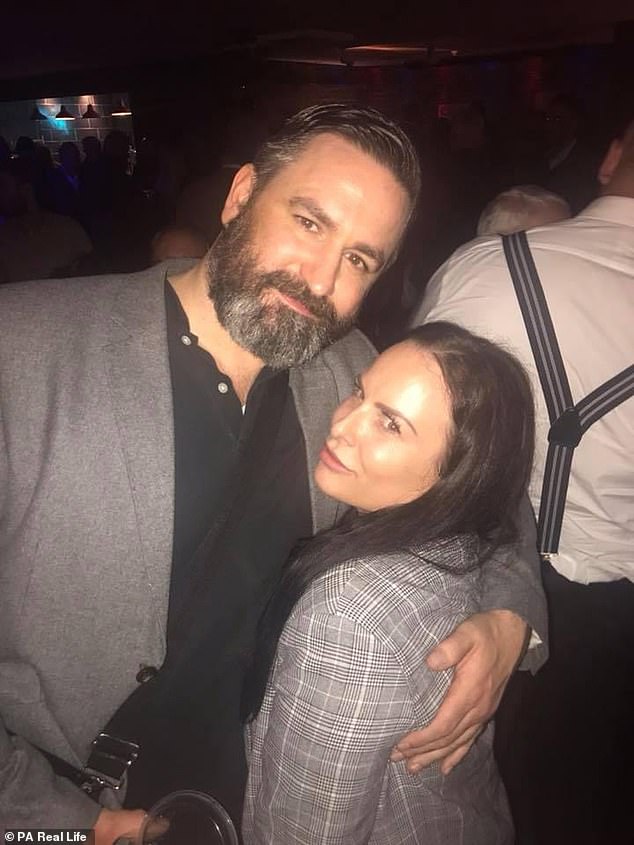 Posing with Marc Bannerman, who played  Gianni di Marco in the BBC soap EastEnders the beauty smouldered for the snap 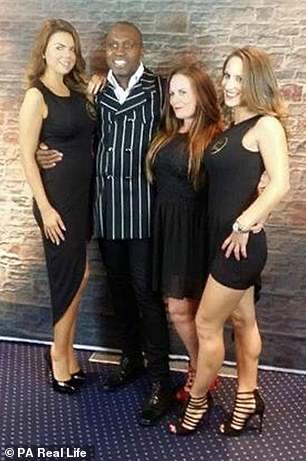 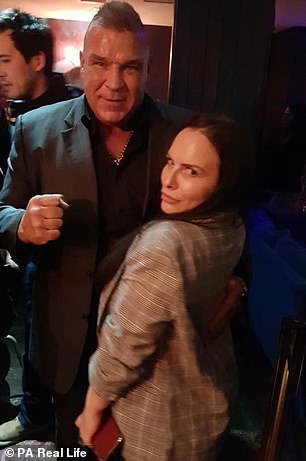 Cheryl posing with her stunning ring girls and former professional boxer Nigel Benn at a red carpet event (left). The glamorous mum even rubbed shoulders with Behind the Line: Escape to Dunkirk actor Joe Egan (right)

‘I feel nervous about going out in the sun, and I’m a sun worshipper. But that’s all changed now. This all makes me panic.’

Cheryl is hoping to raise awareness and encourage sunbed users to take eye health more seriously and for all tanning salons to hammer home the safety message to customers.

She said: ‘Please wear the goggles, because it can have a devastating effect on your life if you don’t.

‘What’s happened to me can happen to anyone.’

Gary Lipman, chairman of The Sunbed Association – the voice for the industry – stressed the importance of following safety guidelines when using tanning beds.

He said: ‘It is absolutely essential that all sunbed users wear appropriate protective eyewear when using a sunbed – and the same should apply when sunbathing.

THE RISKS ASSOCIATED WITH USING SUNBEDS

Sunbeds give out UV light that increases people’s risk of developing skin cancer.

Many sunbeds give out greater UV ray doses than the midday tropical sun.

Tans protect the body from the harmful effects of the sun’s rays.

A tan from a tanning bed is no safer than one from the sun and may even be more dangerous if:

Past studies suggest people who are frequently exposed to UV rays before 25 are more likely to develop skin cancer in later life.

According to The Sunbeds Regulation Act 2010, it is illegal for people under 18 to use them in the UK.

Signs of skin damage are not always obvious for up to 20 years but usually start with a mole that has changed colour or appearance, which may later scab or bleed.

‘Simply closing your eyelids or covering the eyes is not sufficient to protect them from ultraviolet light, as it can penetrate the eyelid skin.

‘It is a requirement of the British Standard that covers sunbeds that appropriate protective eyewear is worn throughout the tanning session.

‘Anyone seeking correct advice and information about using a sunbed responsibly should use a salon in membership of The Sunbed Association, where staff are properly trained to screen customers to check for any contra-indications to tanning and ensure they are informed about all aspects of responsible tanning, including the necessity of wearing appropriate protective eyewear.’

Elon Musk and Bill Gates have long quibbled over who cares more about climate change. In April, Musk refused a climate-related philanthropic contribution...

We’re learning more about Robert Crimo, who was arrested and taken into custody in connection with the Highland Park...

Eight years after winning Season 13 of American Idol, Caleb Johnson says he was ‘really bummed’ that he won. The...
- Advertisement -

Elon Musk and Bill Gates have long quibbled over who cares...
News

We’re learning more about Robert Crimo, who was arrested...
Movies

The final two episodes of the fourth season...
Celeb Zone

At least seven people have now died as a...
News

If you’re like me, stuck inside working every...
Celeb Zone

The parents of Dame Deborah James, who passed away...
Entertainment