The co-founder of a banned fascist group who was photographed doing a Nazi salute in a concentration camp execution chamber has told a court he does not believe the Holocaust occurred.

Alex Davies 27, told court in Winchester that the Hitler regime committed ‘crimes against Jews’ before adding ‘no regime is perfect’.

He is on trial accused of being a member of the organisation National Action (NA) after it was banned on December 16 2016.

Winchester Crown Court was told that the UK Government outlawed the group after it had ‘terrorised’ towns across the country with its call for an ‘all-out race war’.

Davies then set up ‘continuity’ group NS131, which stood for National Socialist Anti-Capitalist Action and which was also banned by the Government, it was claimed.

The court has heard that Davies was photographed in May 2016 giving a Nazi salute and carrying an NA flag in the execution chamber at the Buchenwald concentration camp in Germany, where 56,000 Jews were murdered in the Second World War. 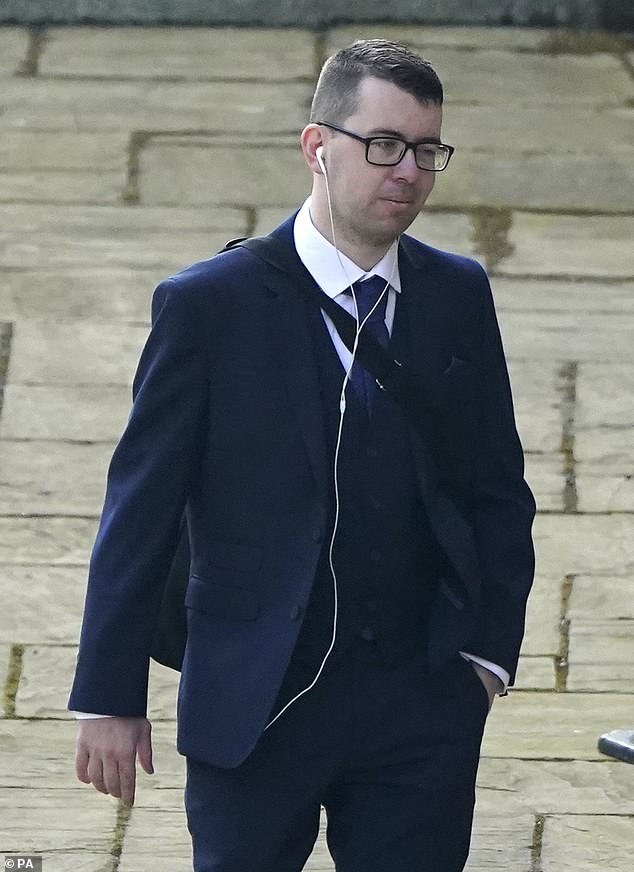 Alex Davies arrives at Winchester Crown Court last month where the 27-year-old, from Swansea, is charged with membership of a banned terrorist organisation 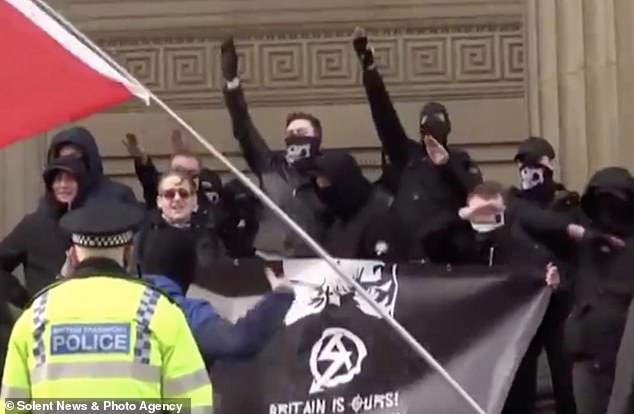 During a four-minute video shown in court last month, a man alleged to be Davies is seen briefly in a hoodie flanked by masked men holding banners reading ‘Britain is ours – the rest must go’ and carrying out ‘Sieg Heil’ Nazi salutes 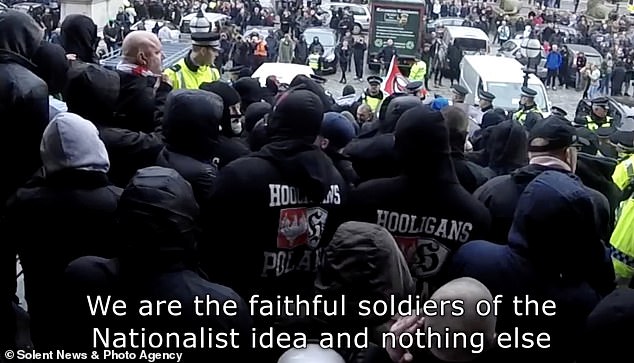 Davies said he felt ‘badly’ about the photograph which also featured fellow NA member Mark Jones, and added: ‘I am not sure that it was a good thing to do, that it was the right thing to do.’

He added: ‘I do not believe there was a systematic extermination of Jews. I can’t be a national socialist if the Holocaust occurred, I cannot support an ideology that supports genocide.

‘I have the same moral compass as anyone else, I believe murder is wrong and I cannot support something that engaged in systematic genocide of people because they are Jewish.’

Davies admitted he was photographed in York a month after the Germany visit, carrying a banner saying ‘Hitler was right’.

He said: ‘Hitler was right about many things. As a national socialist I believe his principles, generally speaking, are in accord with my own.’

He accepted that ‘some people’ would interpret this as referring to the Holocaust.

The court heard that a sticker saying ‘National Action Final Solution’ was featured on the NS131 website.

The jury has also been shown a poster based on the Reservoir Dogs movie, showing NA members with nicknames.

Barnaby Jameson QC, prosecuting, told the court that Davies was called The Founder on the poster, with other members named Gasser Darren and Zyklon Ben, referring to the Holocaust.

Davies said he did not use the term ‘final solution’ to refer to the Holocaust and added: ‘I believe it means a political solution, a national solution that would fix many problems in the country.’

He has said the aim of NA was to ‘bring young people into nationalism’ and to create a ‘nationalist Britain which would be a white Britain’.

But he has told the court that NS131 was not set up as a continuation of NA and had different aims and processes.

Davies, from Swansea, denies membership of a proscribed organisation between December 17 2016 and September 27 2017. 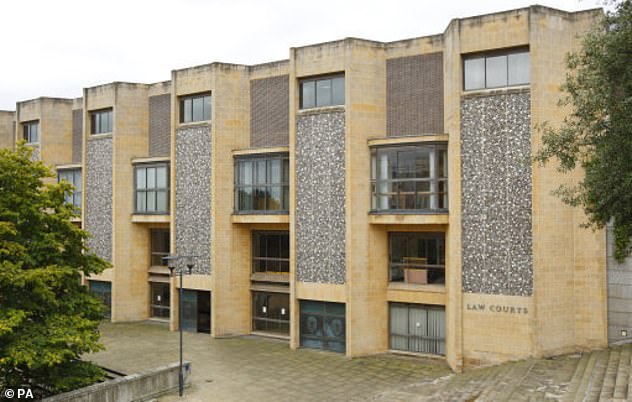 Davies, from Swansea, denies membership of a proscribed organisation between December 17 2016 and September 27 2017, and the trial at Winchester Crown Court (pictured) continues 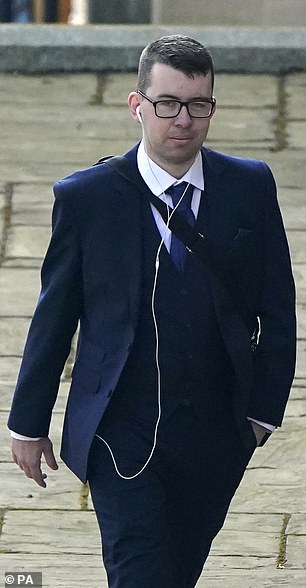 The court has heard that Davies was photographed in May 2016 giving a Nazi salute and carrying an NA flag in the execution chamber at the Buchenwald concentration camp in Germany, where 56,000 Jews were murdered in the Second World War

Davies previously told the court that he denied continuing being a member of NA after the ban, and said he had not attempted to defy it.

He said of the ban: ‘I felt it was an unprovoked move, but in some respects, given the provocative nature of the organisation, I understood the thinking behind the proscription

‘I understood why people in the Home Office would be concerned about what National Action was involved in, not so much what it was doing at the time but the trajectory it was on.’

Davies, who said that it was his idea to set up NA in the summer of 2013 before he went to Warwick University to study philosophy, also told the court he had not attempted to challenge the proscription, although others had.

He said: ‘I felt it was an opportunity to reassess what we had been doing and to start with a blank slate and come up with ways of doing things that would be more productive.’

He said that he left after one year after his link to an NA demonstration in Liverpool was exposed by an undercover reporter for the Sunday Mirror.

Davies told the court that he had previously been involved in several other organisations which included Ukip, the BNP, the Hunt Saboteur Association and British Movement.

He was also a member of Western Spring, which he described as an ‘organisation that aims to create white communities’.

Davies said that he set up NA because as a ‘national socialist’ he was ‘politically homeless’ after the BNP had ‘imploded’.

He said that he did not believe in ‘fomenting a race war’ because it would ‘create harm to my own people’. Davies said the aim of the group was to ‘bring young people into nationalism’ and to create a ‘nationalist Britain which would be a white Britain’.

He admitted that he posed carrying out a Nazi salute for a photo in the execution chamber at Buchenwald concentration camp in May 2016.

Davies said that he was ‘ashamed’ of his actions and added: ‘It was a disgraceful thing to do where people have died and desecrate their memory, whatever side of the political spectrum they may have fallen on.’

He said that he had not agreed or been involved with Twitter posts put out by NA accounts which ‘celebrated’ the murder of MP Jo Cox in June 2016.

He denies membership of a proscribed organisation between December 17 2016 and September 27 2017.

President Biden has made a U-turn over his call for regime change in Russia following the invasion of Ukraine...
- Advertisement -

A Harry Potter fan theory might explain how the...
Celeb Zone

The burrito in the Steigenberger Grandhotel Belvedere came with...
News

Gunmen suspected to be kidnappers...
- Advertisement -