An Australian mother revealed how shedding half her body weight in four years motivated her to take part in a bodybuilding competition.

Jodie Marquardt, 46, was on the brink of type 2 diabetes weighing 105.2kg at her heaviest which prompted her to start exercising and ditch takeaways.

The 5kg weight loss and a breast reduction and lift as well as a a skin removal procedure in November 2019 left Jodie feeling more confident than ever.

In January 2020, she decided to step out of her comfort zone and decided to train for a bodybuilding competition, which she took part in in September 2021.

Now healthier than ever, Jodie wants to take part in further competitions.

Jodie Marquardt, 46, was on the brink of type 2 diabetes weighing 105.2kg at her heaviest (left) which prompted her to start exercising and ditch takeaways in 2019. She lost 50.8kg and now weighs 54.4kg (right)

She said: ‘I never thought I would enter a bodybuilding competition in my life.

‘But after reaching my goal weight of 70kg (11 stone) in nine months by eating fresh wholesome foods, daily walks and gym workouts – I decided to push myself even further.

‘People say the transformation has taken ten years off my appearance, but more importantly, I feel ten years younger too.

‘I have so much more energy and I’m keen to get out of my comfort zone.’ 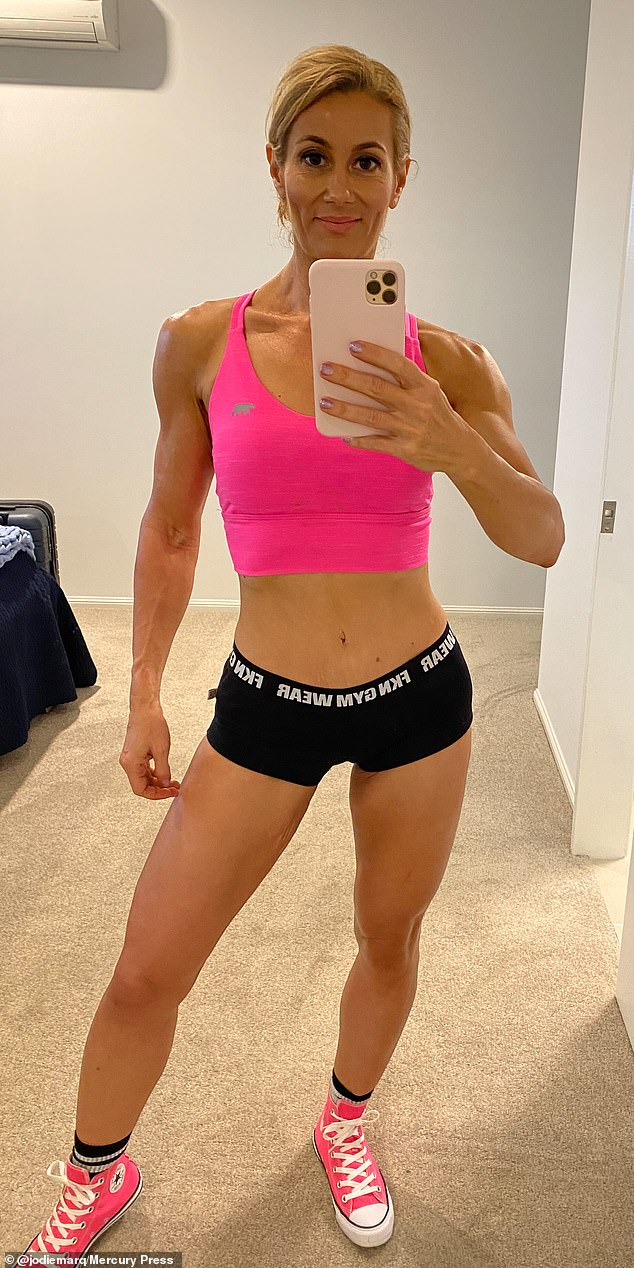 The financial advisor, pictured now, shed 50kg and had a breast reduction surgery, a lift and skin removal surgery in 2019

Prior to losing weight, Jodie would often find herself eating a large pepperoni pizza and snacking on a family size block of chocolate.

She adds: ‘I used to try and fool people by eating a salad in public and then stuffing my face with junk in private.

‘I had tried many fad diets before but this time I was serious because my health was on the line.

‘I decided to take a different approach by changing one habit at a time then moving onto the next area rather than changing everything at once and giving up when it got too hard. 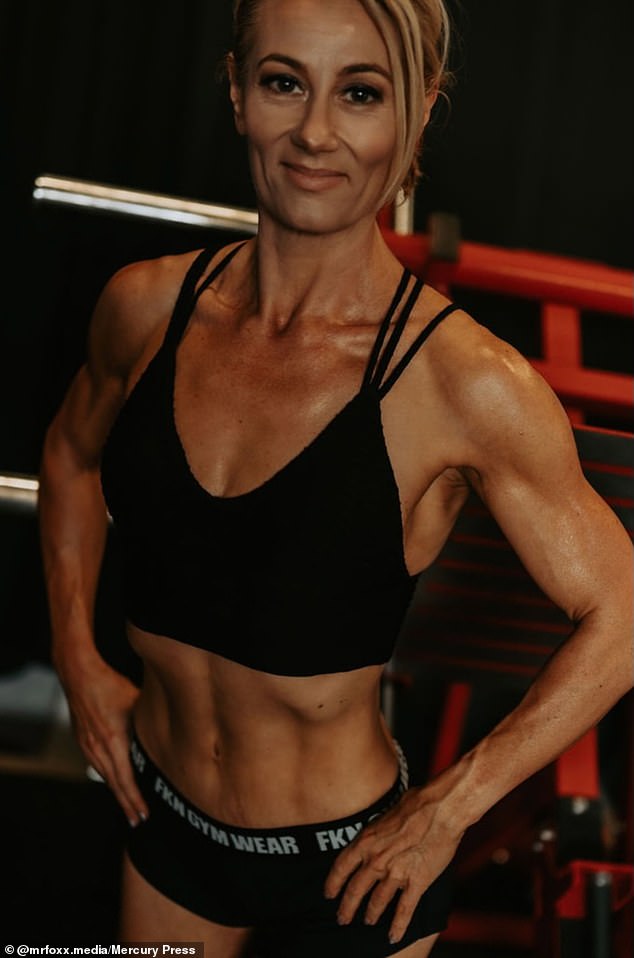 Jodie said she allows herself to have ‘cheat days’ where she eats what she wants, but even on those days, she goes for healthier alternatives to takeaways 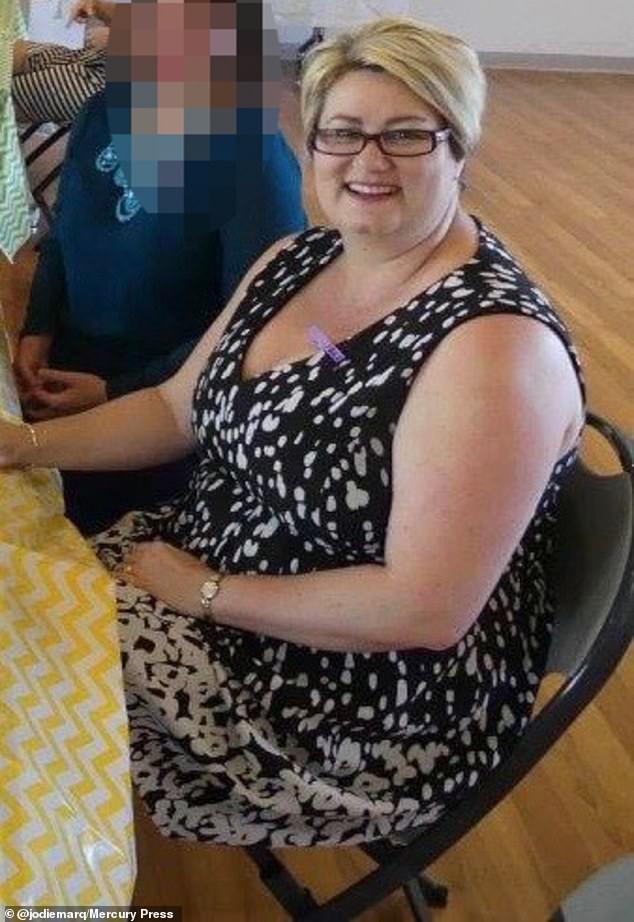 Before she shed the weight, Jodie, pictured, had poor heath, and risked developing type 2 diabetes

‘So rather than junk food daily, I cut back to two days per week and it slowly led to zero.

‘I began walking every day, initially only 2km, which would leave me a sweaty mess.

‘I knew the road to better health would be difficult but I was determined to do it.’

In November 2019, Jodie had a breast reduction and lift along with skin removal on her stomach.

Jodie then came across a bodybuilding competition on social media that motivated her to ‘refine’ her physique. 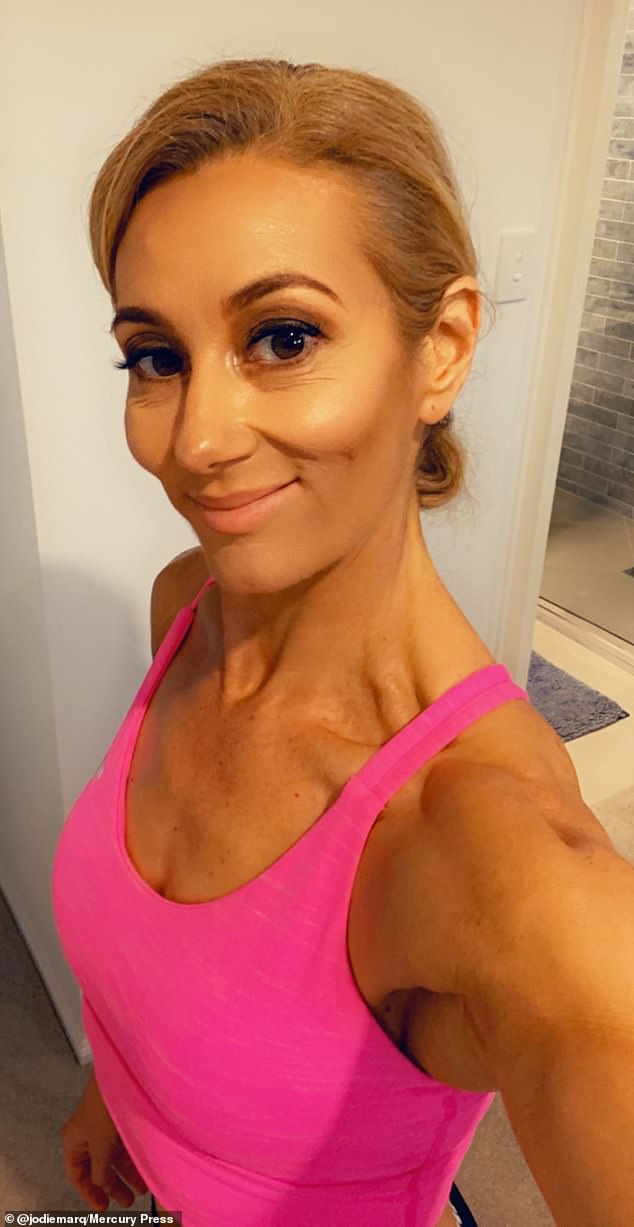 Jodie, who now weighs less than 9st, pictured, said she knew the road to a better health would be difficult when she got started on her body transformation 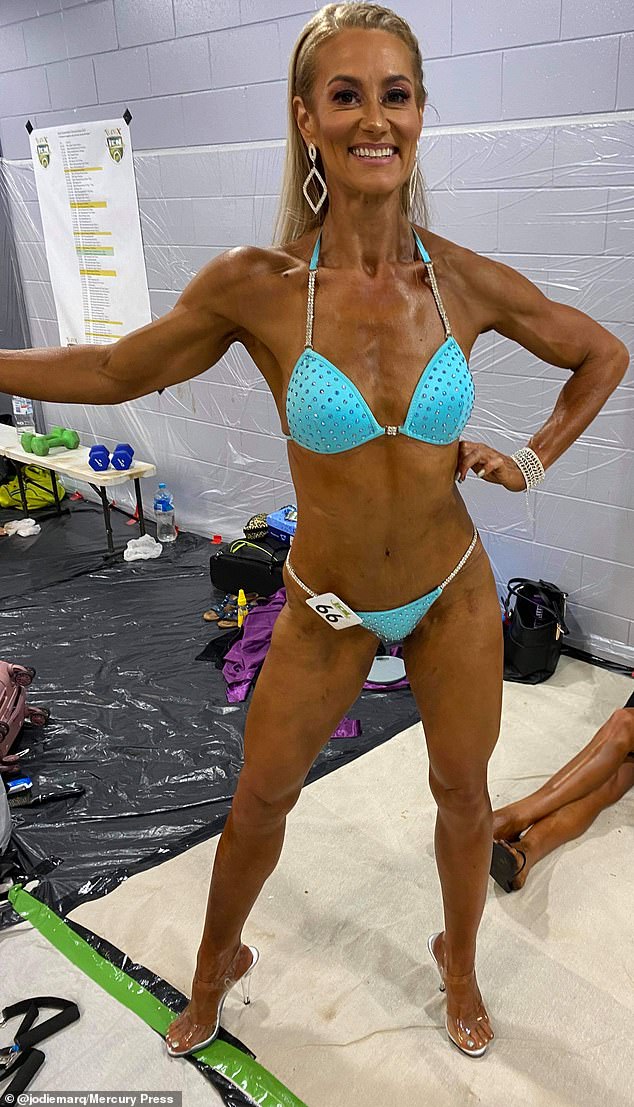 Pictured: Jodie during her first ever bodybuilding competition. While she did not rank thjis time, she said she’ll be entering more competitions in the future

Jodie said that before, left, she’d deal with set backs by opening a bag of crisps, but she now, right, says she’s rpoud of what she has achieved

In January 2020, Jodie began preparing for the competition and within months she had chiselled abs.

She said: ‘I was curvy and busty before and I wore a J cup bra at my heaviest.

‘It is amazing how much more mobile I am without the bigger bust and stomach – little things, like being able to tie my laces.

‘It’s a constant delight to be able to move freely and feel comfortable in my own skin.

‘The training for the competition was intense consisting of an hour of cardio early every morning, followed by two hours of weight training after work for five days a week.’

Breakfast – skip or bacon and egg McMuffin with coffee

Snacks – Yogurt and fruit, oats with mixed berries or tuna and crackers

Jodie remains positive despite not placing at the ICN Tropix competition, and plans to compete again.

She said: ‘I am very proud of what I have achieved; the best part is the change in mindset.

‘I tackle things with positivity by stopping and dealing with set backs rather than opening a bag of crisps.

At the start if her weight loss journey, pictured, Jodie ate takeaway and comfort foods and did little exercise 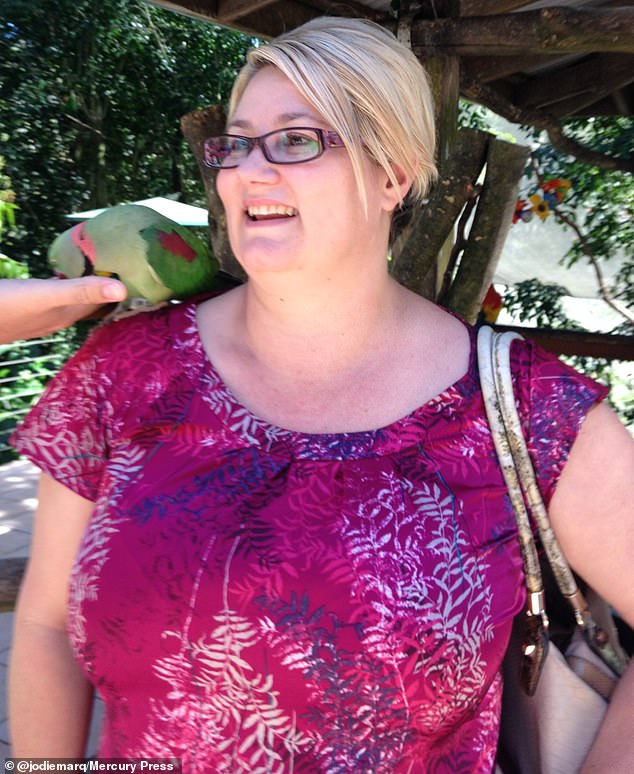 At her heaviest, Jodie admitted she used to wear a ‘J cup’ bra size, pictured. She said she feels more mobile now that she’s lost the extra weight 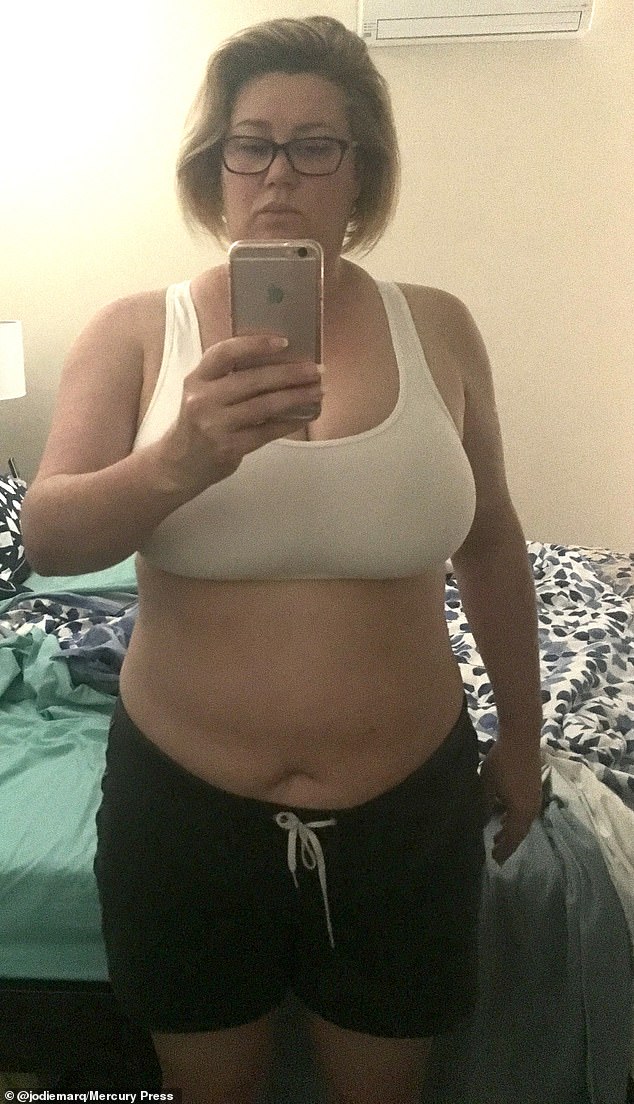 Before, Jodie struggled with her body, pictured, but now she said she delights in being able to move freely

At her heaviest, Jodie, pictured, could eat a hamburger for lucnch and a pizza for dinner with cake for dessert

‘Even on cheat days, I choose healthier dishes such as steak and salad rather than a KFC takeaway.

‘I hope my story highlights the fact anything is possible.

‘I am woman in my forties – with a career, family and house to run.

‘It is not impossible, it just takes consistency.

‘From 42 to 46, I have transformed my life for the better and other women can too.’

Share
Facebook
Twitter
Pinterest
WhatsApp
Previous articleStreet Artists on Both Coasts Take Aim at COVID Authoritarianism and the Lefties Can’t Cope
Next article“Having Only One Perfect Working Eye Is Not Easy At All”-Singer, Ruger Cries Out

Supermarket chain opens a BAR in the...

If you own a fainting couch, now might be a good time to list it for sale. Given the...
- Advertisement -

Silverchair frontman Daniel Johns has been sentenced to 10 months...
Entertainment

If you own a fainting couch, now might be...
Bio

Who is Evan Breen? Evan Breen was born on 7...
News

I approached pro-abortion protesters at the pro-life celebration at...
Celeb Zone

The BBC has warned Antiques Roadshow to be mindful...
Movies

Gaming’s Most-Hated DRM Company Is Coming For DLC Next

Has Spider-Man been entangled by a web in the...
Bio

The following contains spoilers for All Rise Season 3,...
Crime