Pakistan vs England LIVE: Cricket score and updates as Will Jacks makes debut in Karachi 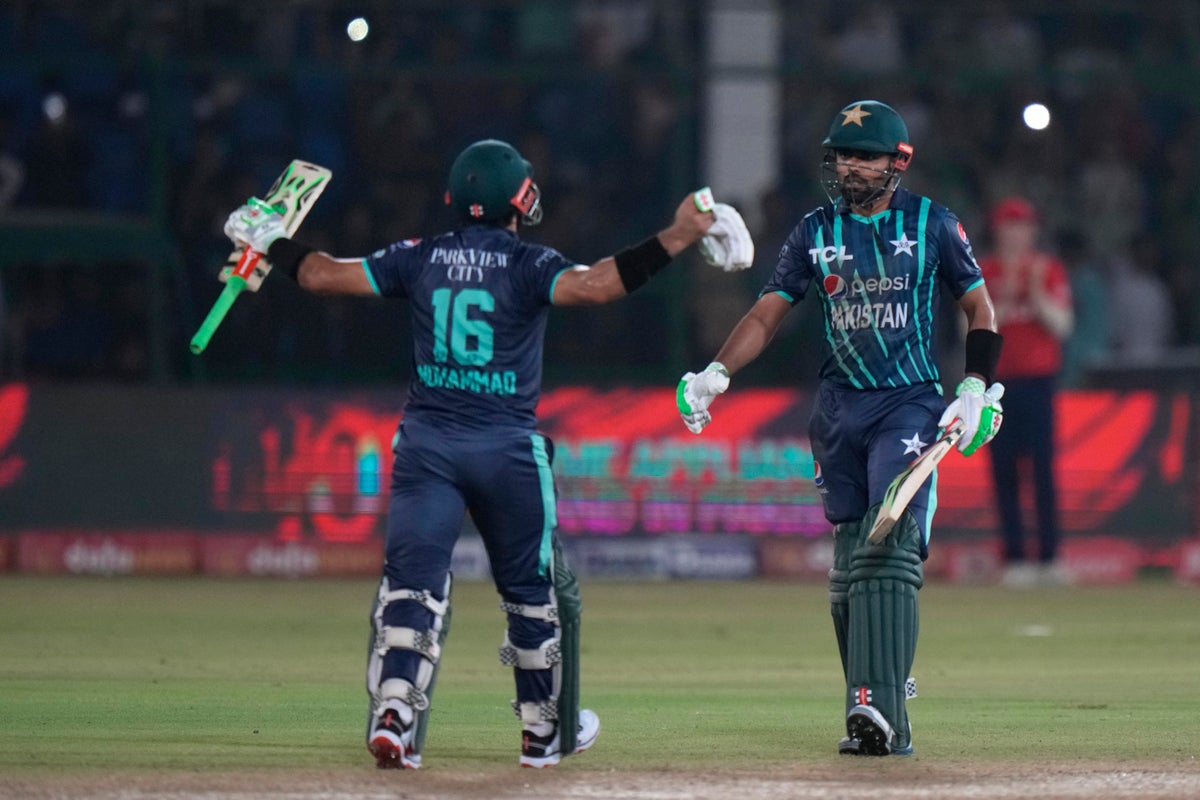 England suffered a bruising defeat in the second T20I of this seven-match series as an unbelievable batting display from Pakistan openers, Mohammad Rizwan and Babar Azam, saw them knock off 200 runs without losing a wicket. Luckily for England it is a quick turnaround with the third T20 coming just a day after they slumped to defeat.

Yesterday, Moeen Ali won the toss and elected to bat first. England started slowly though there were solid contributions from Phil Salt (30), Ben Duckett (43) and Harry Brook (31) before Moeen himself (55*) ended the innings in style propelling England to 199-5 at the halfway stage.

It was a total that seemed out of reach for Pakistan who, two days previously, had only managed to score 158. With no choice but to attack to keep up with the 10 runs per over rate Rizwan and Babar got to work. They were near flawless with one chance – a dropped catch by Alex Hales – the only blemish in their partnership. Rizwan ended up with 88* and Babar (110*) scored his second T20I hundred to get Pakistan over the line at a canter. The series is now level at 1-1 and is well poised for more drama and excitement this evening.

Follow all the action from Karachi as Pakistan host England in the third T20 of the series:

A crucial toss to win?

Moeen Ali has won the toss twice in both matches of this series. He decided to bowl first in the opening game and England managed to knock off 158 with relative ease. In the second game he decided to bat first and despite putting 199 on the board Pakistan chased it down with three balls remaining.

Bowling first seems to be the key factor of these games in Karachi which means the toss today could be a vital one to win. The old adage is usually ‘win the toss, bat first’ but in Asia that isn’t the way to go in T20s.

Nine times out of 10 the team who bats second wins the game. It won’t be surprising if that happens again tonight.

England captain Moeen Ali admitted he took a gamble in yesterday’s match when he decided to bowl himself in the 13th over despite the pre-match planning saying right-handed batters enjoying attacking off-spin bowlers.

“The momentum changed when I bowled my over. That really gave them the belief and after that they were almost unstoppable,” he said after the home side made it 1-1 after two games.

“I felt like it was under control for most of it. I genuinely feel my over lost the game for us. That was a gamble on my part. I went to try and get a wicket, almost buy a wicket. Obviously it didn’t work and that’s when Pakistan really won the game.”

Moeen’s over went for 21 runs, including three sixes, that put Pakistan ahead of the required run-rate. Despite Moeen’s feelings on the matter Mohammad Rizwan and Babar Azam were an unstoppable force yesterday with only Liam Dawson 0-26 (4) and Sam Curran 0-29 (4) coming out of the game with anything like respectable bowling figures for England.

The former Test captain has spent the last six months overseeing a high performance review for the England and Wales Cricket Board, launched in the aftermath of last winter’s Ashes thrashing, and has presented 17 recommendations.

Fifteen of those fall under the remit of the ECB and already have the required backing, but two key proposals involving a wholesale reorganisation of the county calendar need the support of at least 12 of the 18 first-class counties to go ahead.

The former Test captain has spent the last six months overseeing a high performance review for the ECB.

England had no answer for a majestic 200-run partnership between centurion Babar Azam and Mohammad Rizwan as Pakistan levelled their Twenty20 series 1-1 with a 10-wicket win in Karachi.

The tourists were more than happy after posting 199 for five, with captain Moeen Ali to the fore with 55 not out in 23 deliveries, but were comprehensively outclassed by the home side’s openers.

Babar made a mockery of questions over his scoring rate at the Asia Cup, hammering 110 not out 66 balls, and Rizwan smashed an unbeaten 88 as they shared nine sixes and 16 fours.

England will be concerned about the lack of incision from their bowling attack, but the two chances they did generate against Rizwan were squandered as Alex Hales dropped him on 23 and Phil Salt spurned a stumping on 32.

Captain Moeen Ali scored 55 not out in 23 deliveries, but England were comprehensively outclassed by the home side’s openers

Play will start once again at 3.30pm BST with this the third of four games to be played in Karachi.

Before the series began Moeen Ali was supposed to deputise for Jos Buttler in the first three games as the England captain recovers from a calf injury but there is the possibility of Buttler returning earlier than initially expected and he could line-up for England today.

Changes are expected in the team as England’s bowling attack needs freshening up.

David Willey has struggled in both matches so far and could be replaced by Richard Gleeson or another quick bowler but Liam Dawson bowled well in an otherwise fruitless attack yesterday and should keep his place.

Hello and welcome to The Independent’s coverage of the third T20 between England and Pakistan in Karachi. The seven-match series is all square at 1-1 after the hosts knocked off a huge total in yesterday’s second game.

Moeen Ali – deputising as England captain once again – won the toss and chose to bat first with England notching up a huge score of 199-5 with Moeen’s 55* the standout performance of the innings. Pakistan responded and then some as opening batters, Mohammad Rizwan and Babar Azam, blitzed their way to 203-0 from 19.3 overs to bring the series back on level terms.

It was a startling performance and one that provided a few interesting tidbits.

In Asia T20 games are won nine times out of 10 by the side batting second which will make today’s toss a crucial one. Indeed both matches so far have been won by the chasing side – England in the first game and Pakistan in the second.

The pitch also looked slow and low when England batted but seemed to flatten out as the night wore on and made battting an easier prospect in the second innings. Both camps will bare this in mind when they decide how to tackle today’s match.

But who will win the third T20 of the series?

A 14-year-old thug shot a cop at point blank range in North Carolina with the law enforcement official being...
- Advertisement -

A cache of grisly photographs of monkeys reportedly injured...
- Advertisement -