Parents want New Jersey school board members to resign after voting to remove holiday names from the school calendar over fear of causing offense.

The petition demands Randolph Township school board members and Superintendent Jen Fano to ‘resign immediately,’ saying they ‘clearly do not have the best interests of our children in anything they do.’

Earlier this week, Randolph Board of Education members unanimously voted to remove all holiday names off of the school calendar, including religious holidays such as Yom Kippur and Christmas, at a meeting that drew more than 100 people on Thursday.

Instead, all holidays including religious and national holidays such as Thanksgiving and Memorial Day have been designated as simply ‘days off,’ in schools across the Morris County township, about an hour west of New York City. 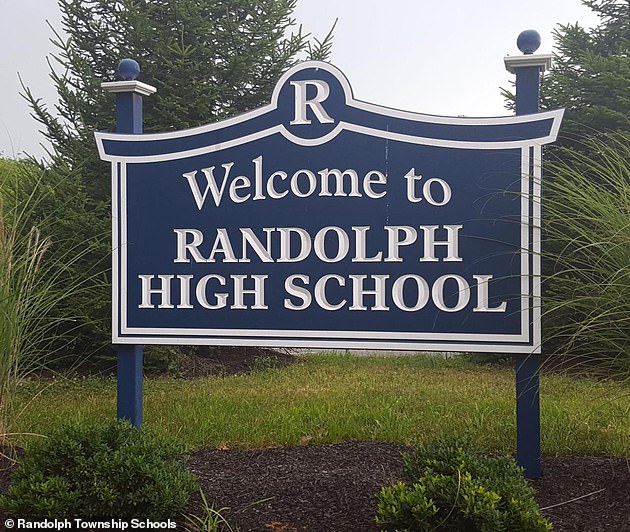 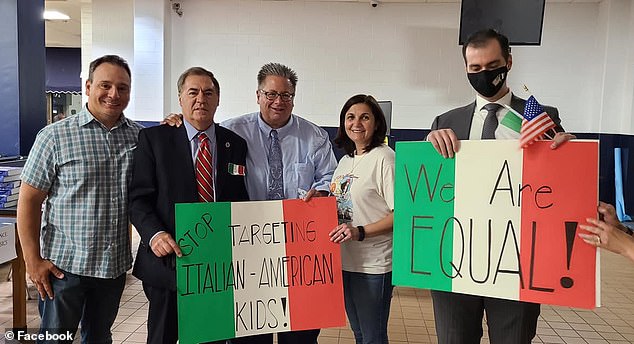 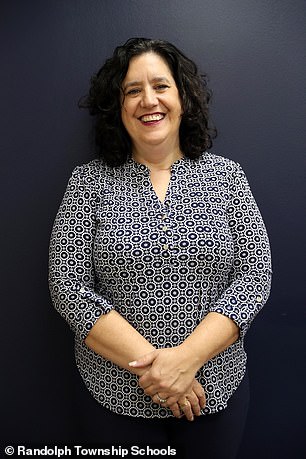 ‘If we don’t have anything on the calendar, we don’t have to have anyone be hurt feelings or anything like that,’ board member Dorene Roche said of the controversial change

Board members made the decision in an effort to mitigate any potential offense a group or person may feel in regard to holidays that celebrate certain historical figures or ethnic groups, while also maintaining that the board is not responsible for naming the holidays to begin with.

It came after there was backlash for renaming Columbus Day as Indigenous People’s Day.

‘If we don’t have anything on the calendar, we don’t have to have anyone be hurt feelings or anything like that,’ board member Dorene Roche said of the controversial change.

‘I don’t think really it is the board’s responsibility to be naming these holidays. Either take them off or just adopt whatever the federal and state governments are doing,’ board member Ronald Conti said prior to Thursday’s controversial vote.

‘What did you just do? What just happened?’ one man exclaimed incredulously in an audio recording of the meeting minutes and agenda.

The petition, which has so far generated 1,400 signatures reads: ‘Jen Fano and all of the Board of Education Members have disgraced our community and clearly do not have the best interests of our children in anything they do. They represent everything that is wrong in education today and are completely incompetent in every aspect of their role. 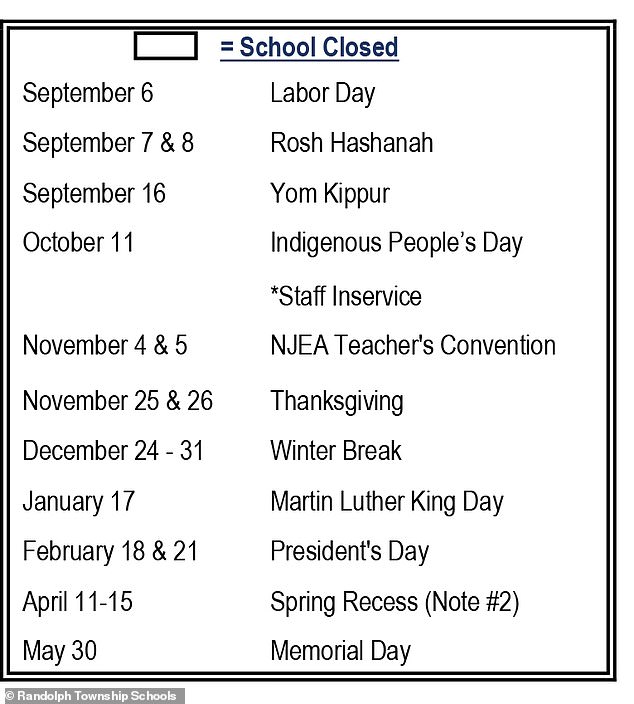 On Friday, the dates of the holidays were plain for all to see, but by Saturday had been removed 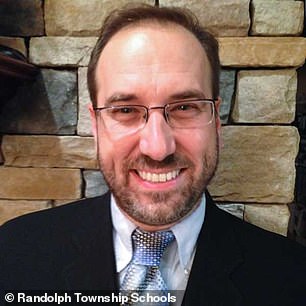 ‘I don’t think really it is the board’s responsibility to be naming these holidays,’ board member Ronald Conti said before Thursday’s unanimous vote

‘This petition is to gather support from all Randolph township residents and Randolph schools faculty members in asking for the IMMEDIATE RESIGNATION of superintendent Fano and ALL board members,’ it states on Change.org.

‘We will not allow our beautiful town to be taken over by woke cancel culture,’ one signatory, Frank Tomasiello, commented. ‘History exist[s] so we can learn from it… The good, the bad, and the ugly. And you have now become part of the ugly.’

‘As an Italian American losing Columbus Day was bad enough but as a Christian losing Easter [and] Christmas is even worse,’ Michael Guarnieri who also signed, wrote. ‘Also I’m [sic] a community with so many Jewish brothers and sisters losing their high holidays is a disgrace,’ he added.

The petition has so far generated 1,400 signatures with some strongly-worded responses

‘Because the entire thing is absolutely insane. If you don’t want to celebrate the holiday, then don’t, but let us have the freedom to observe the Holidays respective to our beliefs… that we see fit in our own households,’ wrote Carol Raniero-Reid.

‘In partnership with the Randolph Township School district, the Board of Education has always been committed to supporting diversity and inclusion amongst our students, staff, and community,’ Pfazo said in a statement. 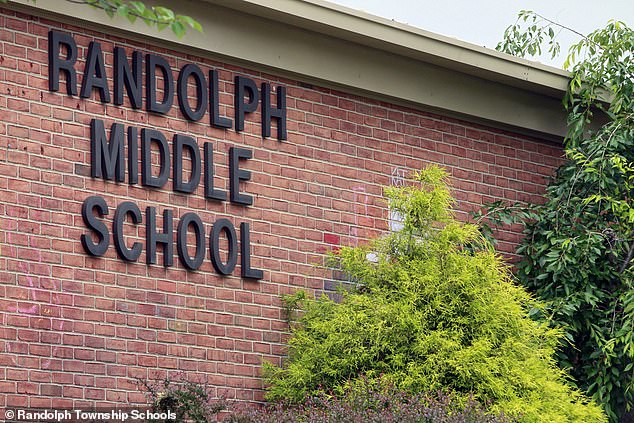 ‘We believe an effective partnership can only be accomplished between the schools and the community through collective input from all stakeholders. Involvement and communication with our constituents help us guide policy decisions/changes and improve district protocols.

‘We agreed unanimously that the change would be both inclusive and equitable. Although we have made these changes to the school district’s calendar, our decision to change the calendar titles will not impact the education of holidays as guided by the district’s curriculum,’ he said.

On Friday, the town’s website showed the district school calendars still had holiday names but by Saturday, a revised version of the calendar had been published with the designations erased.

‘The support and concern of the Randolph community is vital to the educational process,’ the township’s Board of Education website reads.

‘We welcome the public to take the time to interact with the Board of Education. Community members are encouraged to attend public meetings, express their opinions, ask questions and communicate their needs as constituents.’

Euro 2020: Daily briefing Follow live coverage as Turkey take on Wales in Euro 2020 Group A in Baku today. Turkey stumbled out of the blocks in the tournament opener against Italy on Friday night with the Azzurri dominating proceedings and eventually easing away to a comfortable win. Much-fancied as a dark horse to do…

A festivalgoer at Astroworld has sued Travis Scott and Drake for over a million dollars, claiming the rappers ‘incited the crowd’ that left him ‘severely injured’ and eight others dead.  Kristian Paredes, 23, from Austin, Texas, filed the complaint obtained by DailyMail.com Sunday accusing the rappers, Live Nation Entertainment Inc. and Harris County Sports and Convention…

Imagine what the world might be like today if World War II had been fought the way the defense against the global jihad has been. Imagine it is December 7, 1961, the twentieth anniversary of the Pearl Harbor attack, and people have grown weary of the war. President Adlai E. Stevenson (who swept into office…

Big weddings are back!  From June 21, ceremonies will no longer be limited to 30 guests – but make sure you’re up to date with the latest rules For many of us, family and friends have been vital in helping us to get through the pandemic. Recognising the sacrifices we’ve all made, and the importance…

HP Inc.’s stock surged in extended trading Tuesday after the iconic computing giant reported a sharp jump in personal computer sales and overall revenue, but acknowledged component shortages will linger through the first half of 2022. Component constraints will remain an issue the next few quarters, but HP’s ability to “mix and match” parts was…