Revealed: What flooding in Dublin could look like by 2100 if climate crisis is not addressed 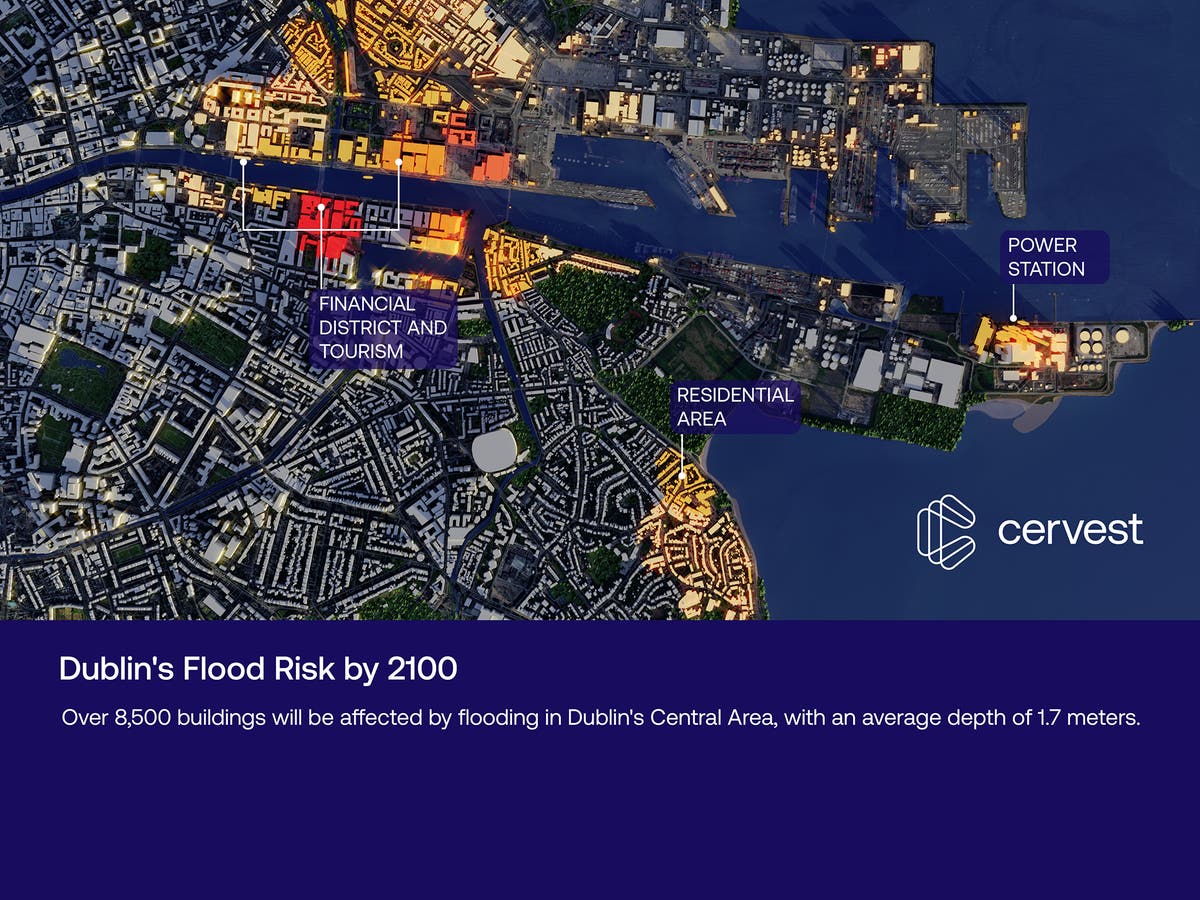 Homes, museums and power stations will be among the thousands of buildings at risk of flooding in Dublin by 2100 if climate change continues unabated, according to new data visualisation.

The 3D visualisation of central Dublin shows that more than 8,500 buildings could be flooded to an average depth of 1.7 meters by the end of the century if no further action is taken to mitigate the risks of global heating.

The buildings and areas expected to be damaged by coastal flooding also include hotels and Dublin’s financial district, according to the analysis by Cervest, a tech company that assesses the potential climate risk to the assets of businesses, governments and NGOs such as factories and offices.

The data visualisation was released on Thursday to coincide with the start of the Dublin Climate Summit – of which The Independent is a media partner.

Cervest said its visualisation demonstrates the devastating consequences in store for cityscapes and infrastructure if nothing is done to combat global heating and warned that the physical damage will have knock-on social and economic impacts.

What’s more, the analysis only considers the risk associated with coastal flooding. When other climate risks are factored in – such as extreme heat and wind stress – increasingly large areas of Dublin will be affected, according to Cervest’s data visualisation team.

If mitigation policies are applied soon – such as implementing national emissions reduction commitments and deforestation pledges – this scenario might change, the visualisation team said.

However, they warned that some damages were now inevitable.

“Even if we reach net zero tomorrow, physical risk is already locked into our system due to past actions,” the team said in a statement alongside the visualisation.

Globally, the company said physical assets worth more than £2 trillion are already at risk from climate change, and economic losses associated with global heating are expected to rise to £18.7 trillion by 2050.

Cervest founder and CEO Iggy Bassi said the company’s insights can be used to pinpoint vulnerabilities and inform decisions.

“You don’t need to be a climate scientist to understand this powerful image,” he said. “My city is going to look like this … unless we take action.”

Earlier this week the World Meteorological Organisation issued a new update warning that there was now a 50/50 chance the global temperature will temporarily reach 1.5C above pre-industrial levels in the next five years.

The world has already warmed by 1.1C since the temperatures recorded before the industrial revolution, so reaching 1.5C is only 0.4C away.

Even temporarily exceeding 1.5C would be a significant moment because the 2015 Paris Agreement aimed to keep the average temperature to no more than 1.5C higher than pre-industrial times, in order to prevent the worst damage from climate change.

Exceeding the 1.5C threshold for one year does not mean the Paris accord has been broken because the Paris target refers to the average temperature and excludes year-on-year natural variability.

Nevertheless, climate experts said the update showed how fast the world was approaching this target, which will likely lead to even more harm to lives and livelihoods as extreme weather events, such as flooding, become more frequent and severe.

Last month, The Independent revealed which areas of Britain would be most at risk from non-coastal flooding by 2050 due to the climate crisis.

They included Cardiff, Windsor and parts of London.