Be there in a Jumping Jack Flash! Sally Wood, 44, and husband Ronnie, 74 , reveal they took a very low-key tube ride to the BRIT Awards as they share their snaps from the night

By Ellen Coughlan For Mailonline

Sally Wood revealed she and her Rolling Stones rocker husband Ronnie Wood took to the tube to the BRIT Awards on Tuesday night.

The couple shared snaps from their own album on Instagram a night later, saying: ‘The tube is the best way’ because the O2 venue in Greenwich always gets clogged up with traffic.

In a candid selfie, Sally, 44 and Ronnie, 74, who is worth around £150million sported paper face masks as they posed from the underground in an Instagram snap on Wednesday. 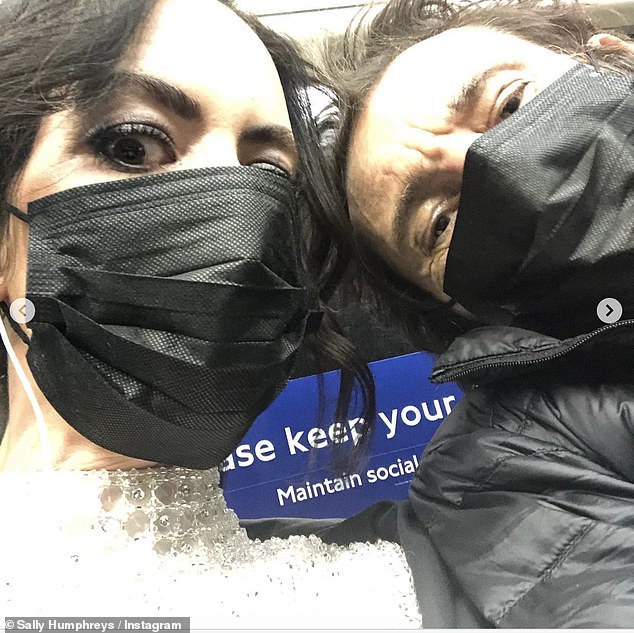 Be there in a Jumping Jack Flash! Sally Wood, 44, and husband Ronnie, 74 , revealed on Instagram on Wednesday they took a very low-key tube ride to the BRIT Awards 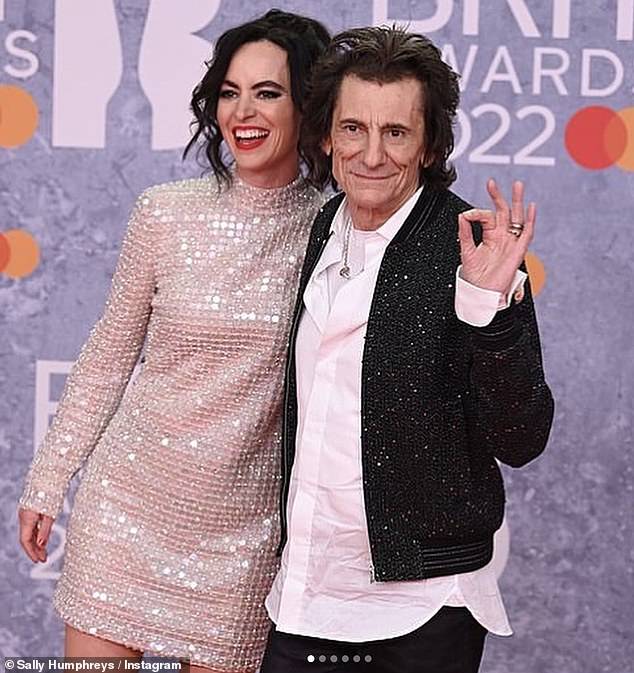 Sweet! The couple also shared this very glam shot from the red carpet

In another picture Ronnie cut a trendy figure in a dazzling black bomber jacket which he layered beneath a white shirt and charcoal trousers.

His gorgeous wife beamed for the camera while flashing her legs in a glitzy white minidress.

The beauty topped off her glam look with a slick of red lipstick to add a pop of colour. 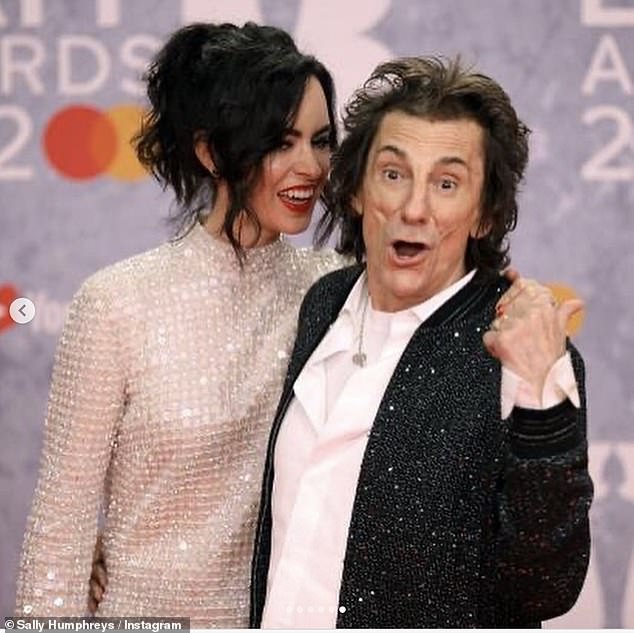 Looking good: In another picture Ronnie cut a trendy figure in a dazzling black bomber jacket which he layered beneath a white shirt and charcoal trousers

The rock star nervously stood on stage in another behind the scenes picture from the night.

The couple posed with a slew of stars during the awards including Succession’s Brian Cox.

The awards ceremony kicked off at 8pm on ITV and was presented by Mo Gilligan for the first time, with Maya Jama hosting the red carpet. 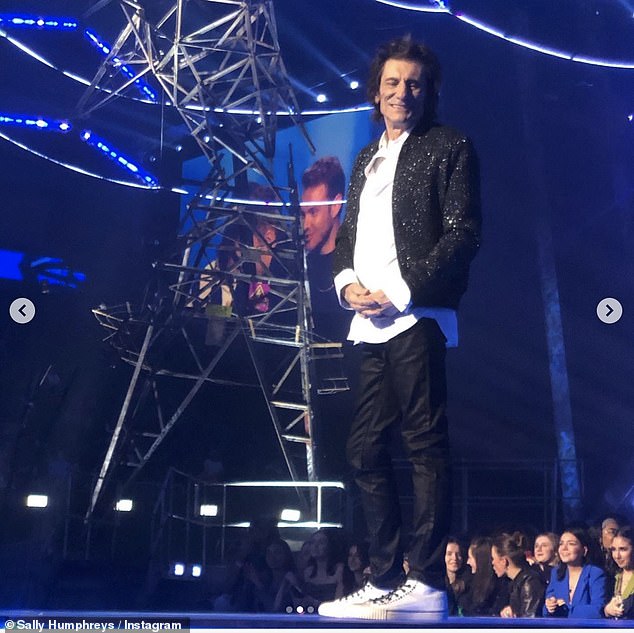 Shy: The rock star nervously stood on stage in another behind the scenes picture from the night 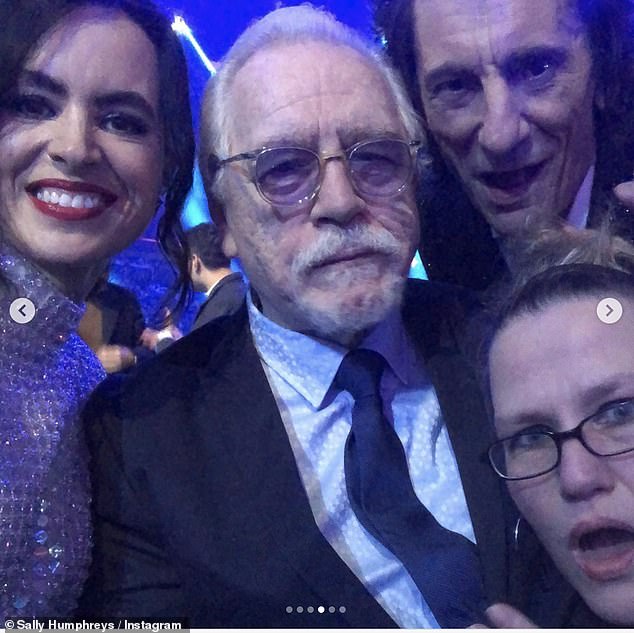 New friend: The couple posed with a slew of stars during the awards including Succession’s Brian Cox

The show got off to a bang with a spectacular theatrical performance from Ed with a new version of Bad Habits, for which he was joined by special guests Bring Me The Horizon.

With medleys and music legends at the heart of the BRITs on-stage performances, Anne-Marie – who fell over during her performance – and KSI along with Digital Farm Animals delivered a show-stopping three song set whilst rock royalty Liam Gallagher braved a helicopter to the O2 arena to perform his new single Everything’s Electric.

The 2022 BRIT Awards was truly Adele’s night and she performed a stripped-back version of her power-ballad I Drink Wine before winning three awards, bringing her complete tally of BRIT trophies to 12 since winning the first ever Rising Star award in 2008. 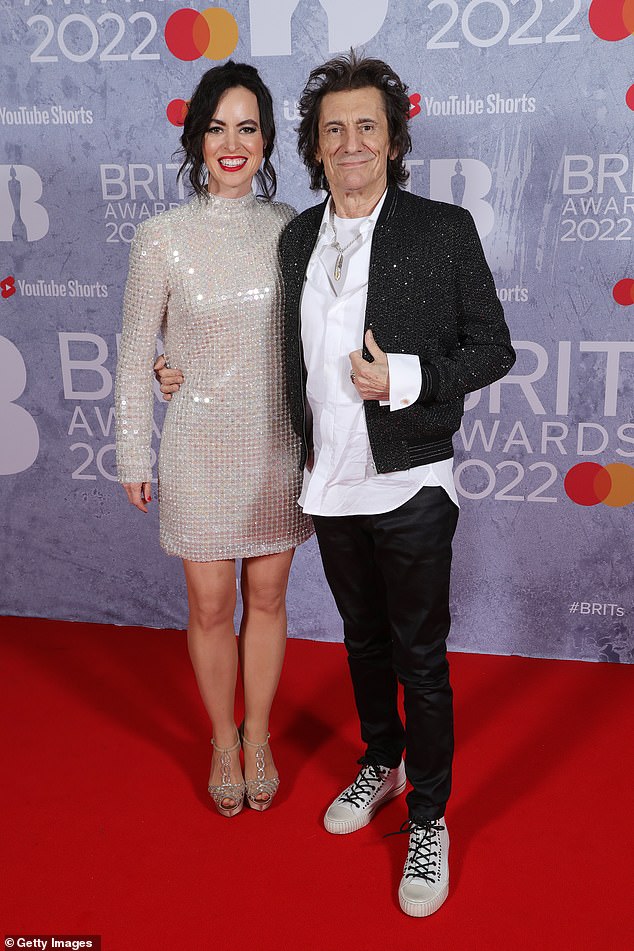 Stunning: His gorgeous wife beamed for the camera while flashing her legs in a glitzy white minidress

Adele was presented with the prestigious Mastercard Album of the Year for the third time, having won for her previous two albums in 2012 and 2016 – the only solo artist in BRITs history to have won this award three times.

The songstress also became the first ever recipient of the BRITs’ inaugural Artist of the Year award, with her third victory claimed with the win for Song of the Year for Easy On Me.

The International counterparts to these new categories similarly saw two unbeatable global artists celebrated; with Billie Eilish picking up International Artist of the Year and Olivia Rodrigo presented with International Song of the Year for Good 4 U – the biggest selling international single of the year in the UK. 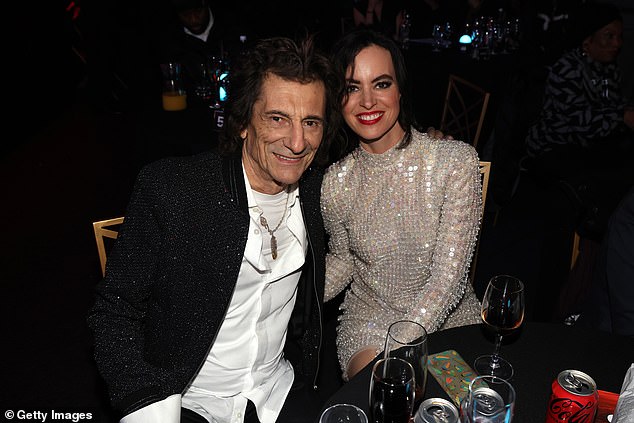 Date: The couple relaxed and enjoyed the event over a few drinks

At least six people have died and eight have...
News

Some people struggle with their confidence. Not so Wyoming...
- Advertisement -