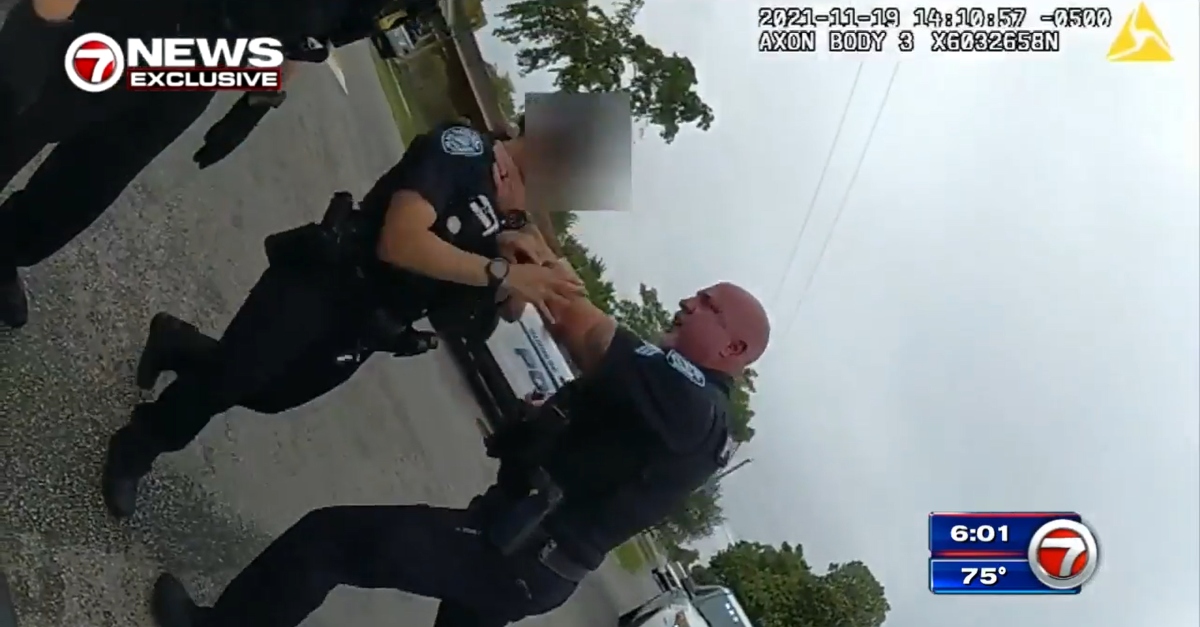 As seen on video, a Florida police officer grabbed a female cop by the throat after she pulled him off a handcuffed man. Their chief is saying the officer in question, Sgt. Christopher Pullease, stepped way over the line.

“I find this behavior to be disgusting,” Sunrise Police Chief Anthony Rosa told WSVN. “I think the video speaks for itself.”

This all started after a man hit people outside of a Shop & Save convenience store, officers said in the report. Police arrested him for aggravated battery, handcuffing him behind his back, but as clear from footage dated Nov. 19, they seemed to be having trouble getting him into the cruiser. Pullease arrived and walked up to the scene. He pulled out pepper spray, and aimed it at the man, who retreated further into the backseat.

Citing the ongoing investigation, police removed audio from the footage and censored faces besides Pullease’s, but Rosa told the outlet that the sergeant said something on arrival that escalated the situation when calm was required.

“I find it to be inappropriate and unprofessional,” the chief said.

The female officer pulled the sergeant off the man, but Pullease turned around and briefly grabbed her by the throat, and he pushed her back as his hand shifted to her right shoulder.

“The initial contact between the sergeant and the officer was his hand against her throat,” Rosa said.

The chief said he was proud of the younger officer for intervening. He highlighted the massive difference in their time on the job. Pullease is reportedly a 21-year veteran of the department, while the other officer has been there for two-and-a-half years.

“She took some definitive action,” Rosa said. “I can only imagine what she must be feeling. She’s a newer officer, and he’s a very senior sergeant.”

Asked why Pullease was not arrested, Rosa declined to explain because of the ongoing investigation.

Pullease is now on desk duty, and he declined to comment to the outlet through his union. He was reportedly cleared of two excessive force allegations almost 20 years ago.

Have a tip we should know? [email protected]lawandcrime.com

Spoiler alert: There are some students who do not need tuition. So says tuition teacher Donnell Koh, who teaches Chemistry...
- Advertisement -

General Hospital spoilers promise to be explosive during the week of May 23 – 27. The Corinthos family prepares...

General Hospital spoilers promise to be explosive during the...
Business

Who is Liz Cho? Elizabeth ‘Liz’ Cho was born on...