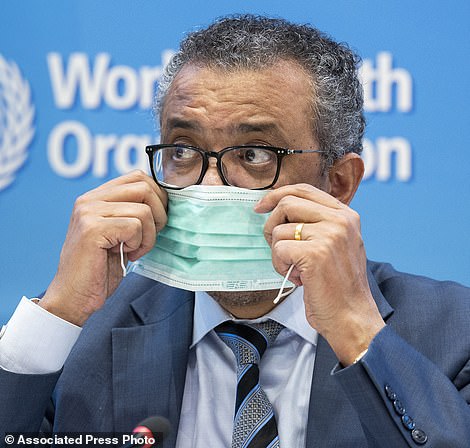 The head of the World Health Organization, Tedros Adhanom Ghebreyesus, has finally criticised China’s Zero Covid strategy and urged it to change its policy

The head of the World Health Organization has finally criticised China’s Zero Covid strategy and urged it to change its policy as millions in Shanghai enter their seventh week of lockdown.

In a rare rebuke of the Communist party, which is one of the biggest financial contributors to the health agency, WHO director-general Tedros Adhanom Ghebreyesus said the strategy was unsustainable.

‘As we all know, the virus is evolving, changing its behaviours, becoming more transmissible. With that changing behaviour, changing your measures will be very important,’ he said on Tuesday.

‘When we talk about the zero-Covid strategy, we don’t think it’s sustainable.’ He added: ‘Considering the behaviour of the virus I think a shift [in China’s strategy] will be very important.’

The WHO had previously been slammed as too ‘China-centric’ during the pandemic and was accused of failing to publicly challenge Chinese misinformation in early 2020.

Chinese censors have already censored Dr Tedros’ comments, with searches for the hashtags ‘Tedros’ and ‘WHO’ on the popular Weibo social media platform displaying no results.

Users of the WeChat app have also been unable to share articles posted on an official United Nations health agency’s account.

Official Chinese modelling used to justify sticking to Zero Covid has warned that ditching it now would unleash a ‘tsunami’ of infections and kill 1.6million people this summer.

It came as most of the 25million people living in Shanghai prepared for the most severe phase of lockdown as the state doggedly pursues the virus-elimination strategy.

In an attempt to achieve ‘societal zero’, when no Covid cases are reported outside quarantine facilities, Shanghai officials will over the next few days stop commercial food deliveries and non-emergency hospital visits.

More than 40 Chinese cities are under full or partial lockdown measures, according to estimates by the Japanese firm Nomura.

China has spent the last two years slamming the West for overseeing so many virus deaths, which makes it politically difficult for the Chinese Government to move away from the Zero Covid policy. 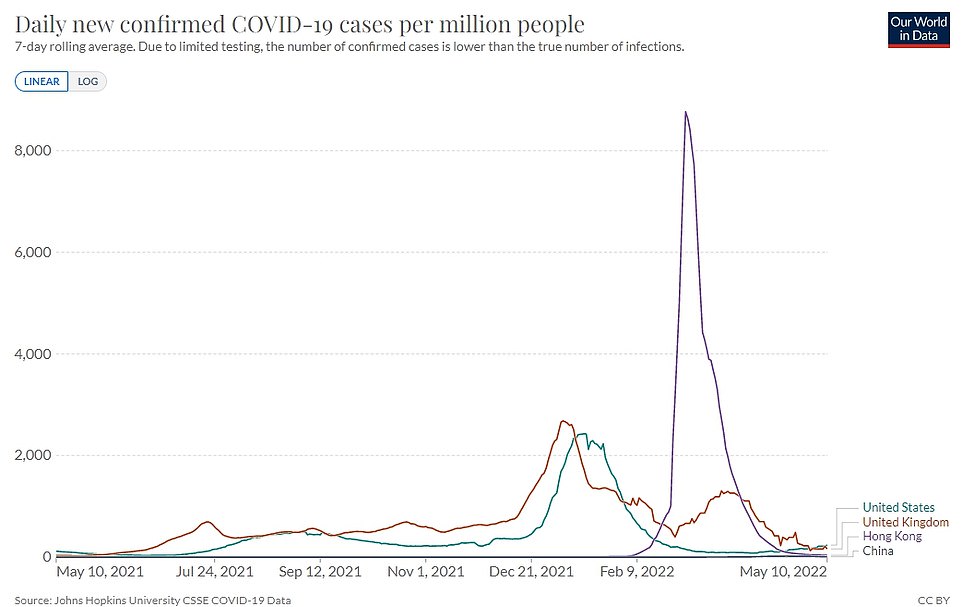 China has recorded more than 760,000 new Covid cases since the ultra-infectious Omicron variants broke through China’s super-strict restrictions in March – although there are doubts about the reliability of the data. That figure includes semi-autonomous Hong Kong 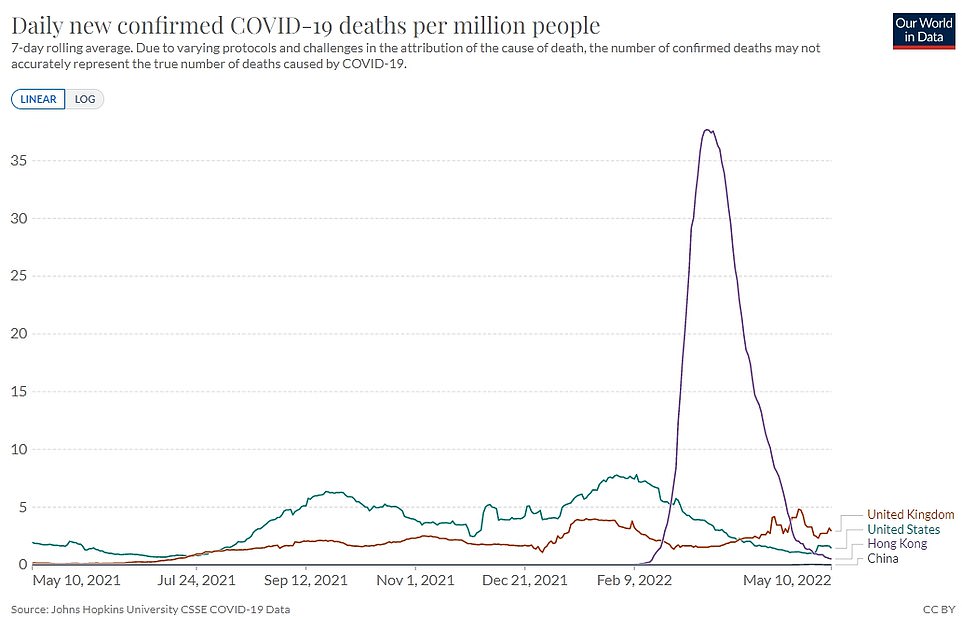 There have been just 550 deaths, but Western scientists are sceptical about that figure 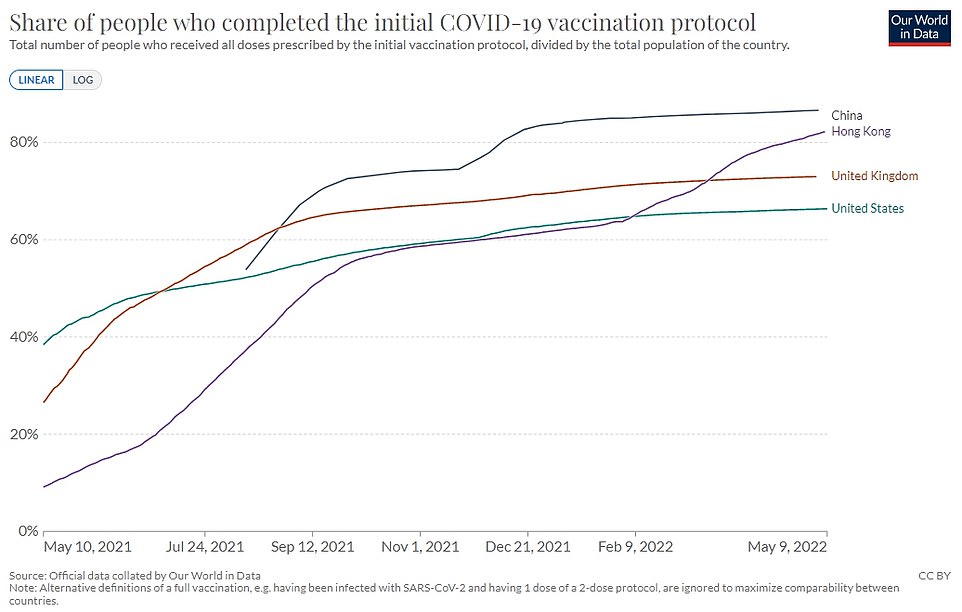 Around 90 per cent of the population nationwide has been vaccinated, but China is relying on subpar homegrown vaccines that have been shown to be virtually useless at stopping Omicron from spreading and offer little protection against severe disease compared to the Western mRNA jabs 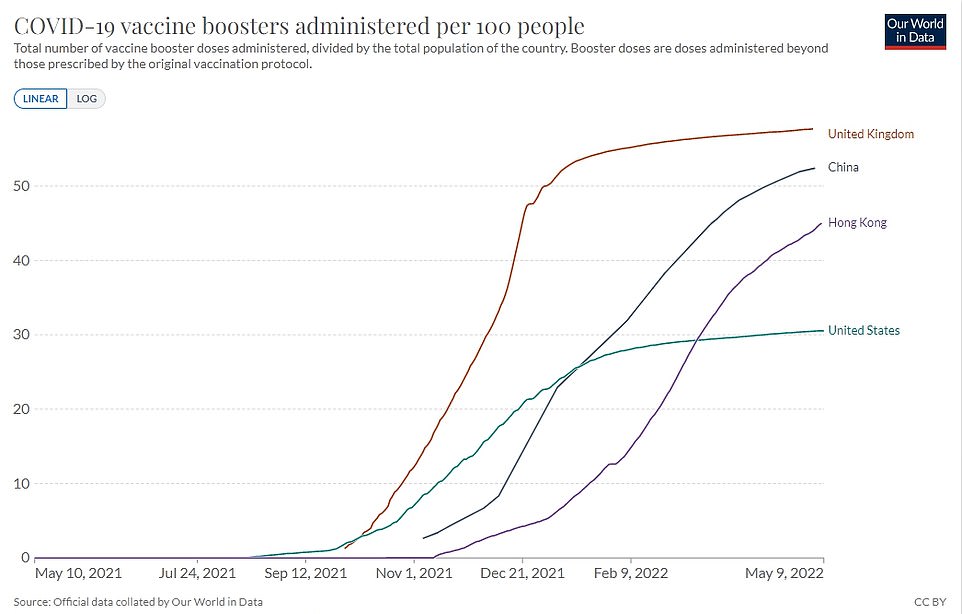 Figures suggest as few as a third of the more vulnerable – those over 60 – have had a booster, although the overall figure is closer to 50 per cent 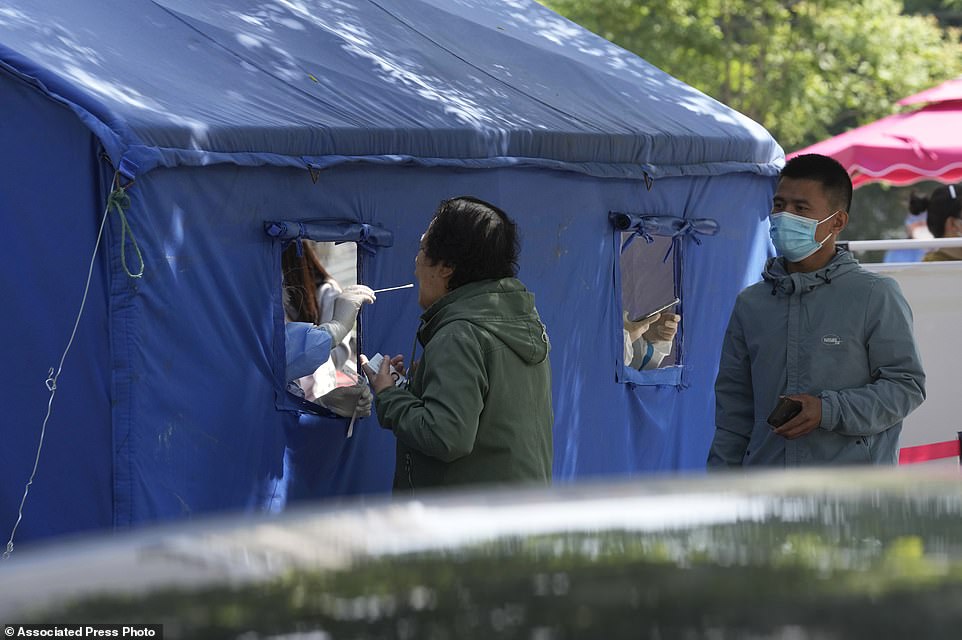 Residents line up for mass COVID testing on Wednesday, May 11, 2022, in Beijing. (AP Photo/Ng Han Guan) 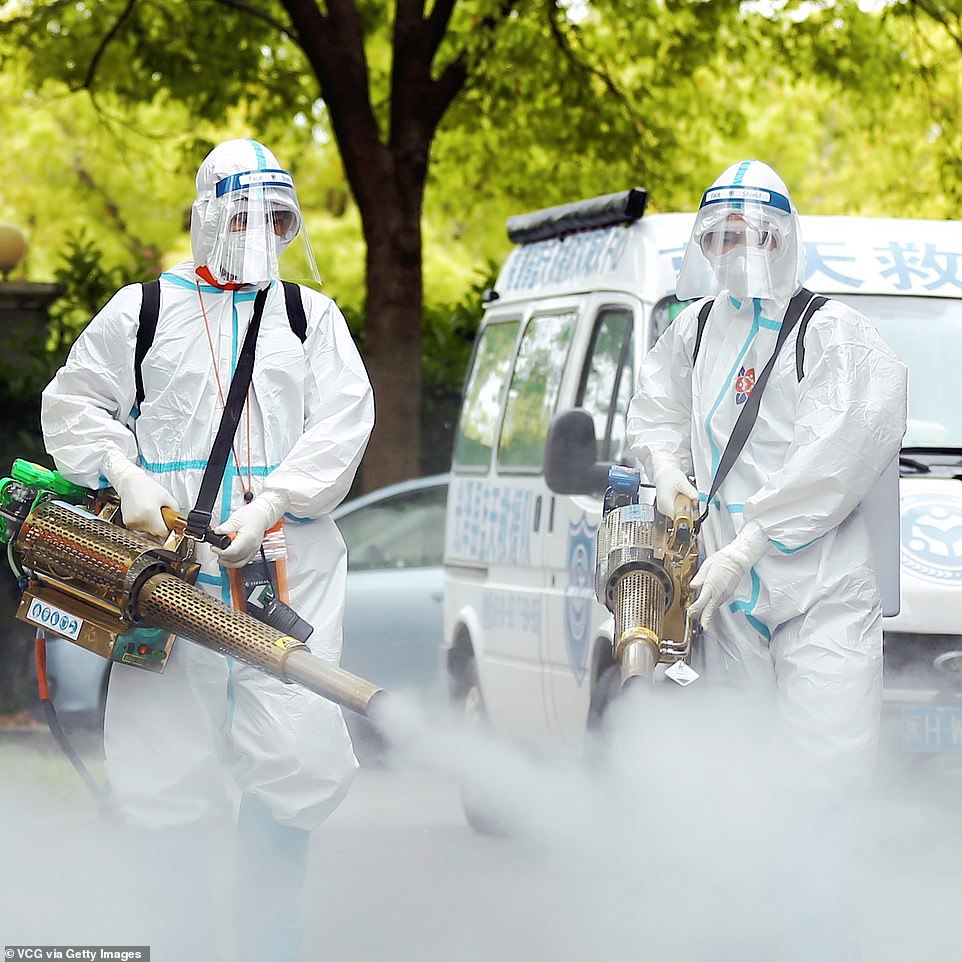 Members of the Blue Sky Rescue Team disinfect a residential community during the phased lockdown triggered by the COVID-19 outbreak on April 24, 2022 in Shanghai, China

Dr Tedros’ comments were echoed by Mike Ryan, the WHO’s emergencies chief, who said all pandemic control actions should ‘show due respect to individual and human rights.’

Countries need to ‘balance the control measures, the impact on society, the impact on the economy. That is not always an easy calibration to make,’ Dr Ryan said.

China is one of the last remaining countries to cling onto the virus elimination strategy that was ditched months ago by the likes of South Korea, Australia, New Zealand and Singapore.

It means China is still sending every Covid case and their close contact to centralised quarantine facilities and sealing off entire apartment blocks or streets in the event of a single positive test.

China has recorded more than 760,000 new Covid cases and around 550 deaths since the ultra-infectious Omicron variants broke through China’s super-strict restrictions in March – although there are doubts about the reliability of the data.

The Government has maintained the strategy is the best way forward after official modelling claimed that ditching the policy would see Omicron kill 1.6million people between now and July.

Researchers at Shanghai’s Fudan University made the projections in a study published in the scientific journal Nature.

They said even the milder Omicron variant could spark a deadly wave because of China’s low vaccine uptake among older groups and reliance on less effective jabs.

Around 90 per cent of the population nationwide has been vaccinated, but figures suggest as few as a third of the more vulnerable – those over 60 – have had a booster.

China is relying on subpar homegrown vaccines that have been shown to be virtually useless at stopping Omicron from spreading and offer little protection against severe disease compared to the Western mRNA jabs.

Meanwhile, the WHO’s remarks about China’s Covid strategy prompted China’s army of internet censors to race to snuff out his comments.

Dragged away: Authorities in hazmat suits manhandle a resident in Shanghai

The hit on China’s economy from its latest Covid-19 outbreak is more than 10 times that of 2020 when the Wuhan outbreak forced the country into lockdown for the first time, according to a leading Chinese economics professor.

China has pursued a strict ‘zero-Covid’ policy which has involved some of the most restrictive health measures seen anywhere in the world, including food rationing and indefinite lockdowns.

Disruptions have already cost China 18 trillion yuan (US$2.68 trillion), according to Xu Jianguo, associate professor of economics at the National School of Development in Peking University.

The Wuhan outbreak in 2020 affected 13 million people and caused 1.7 trillion yuan worth of economic damage, he said on a webinar.

China has set 5.5 percent as a target for economic growth this year, but Jianguo doubts the country will even be able to match its 2020 growth of 2.3 percent.

The Chinese Communist Party has been censoring online criticism of the policy.

A social media hashtag about the WHO’s comments, which had been a rallying point for lively online discussion, appeared to have been blocked by mid-morning.

Before they were expunged from the internet, comments had questioned  Zero Covid, with one saying ‘even the WHO’s Tedros has now changed his stance’.

Another wrote: ‘Will our government listen to the WHO director general’s recommendations?’

Hu Xijin, the influential former editor of Chinese state tabloid Global Times, slammed the comments in a message to his 24 million Weibo followers, saying ‘in the end, the WHO’s attitude isn’t important’.

It is necessary to ‘create the conditions for the victorious convening of the 20th Party Congress’, she said, according to state news agency Xinhua.

Meanwhile, the daily number of new cases in Shanghai reported on Wednesday had fallen to less than 1,500, down from a peak of 26,000 in mid-April.

Official notices from local committees of the ruling Communist Party, seen by the BBC, show the city is about to go into a ‘silent period’ for the next three days to try and squash the outbreak to zero cases.

These include only allowing basic government food deliveries, not allowing residents to go outside their front door for any reason and requiring approval from local authorities before being allowed to access hospitals.

Footage on social media also shows extreme disinfection taking place inside homes where people have been removed after testing positive.

Residents have in some cases been ordered to leave their keys with a community volunteer when they are taken to quarantine so disinfectant workers can get in, a new requirement that has no apparent legal basis.

Rare anti-Government protests have broken out in Shanghai in recent weeks, with the state relying on military force to shut them down.

Along with the human cost, the adherence to ‘Zero COVID’ as many other countries loosen restrictions and try to live with the virus is exacting a growing economic toll.

However, the party under leader Xi Jinping shows no sign of backing off amid efforts to ensure stability and shore up its authority ahead of a major party congress this fall.

The WHO has said China’s death toll stands at just over 15,000 and the Johns Hopkins University of Medicine Coronavirus Resource center offers a figure of 14,538.

Those figures combine mainland China’s deaths with those in the semi-autonomous region of Hong Kong, which has recorded almost 10,000 fatalities despite tight restrictions, and in self-governing Taiwan.

In the capital Beijing, residents have been ordered to undergo mass testing in a bid to prevent a major outbreak like that in Shanghai.

The city, which reported 37 new cases on Wednesday, has locked down individual buildings and residential compounds, shut about 60 subway stations and banned dining at restaurants, allowing only takeout and delivery.

Getty Deshaun Watson #4 of the Houston Texans looks on...

Chrissie Swan stepped out in style on Tuesday for...

She became one of Married At First Sight’s most...
- Advertisement -

Society scammer Anna Delvey is continuing to try and...
News

After escaping the Taliban's clutches, Bashir and Kassim Mohammed...
Bio

Will Smith has had a devoted fan base ever...
- Advertisement -

Police launches desperate search for two missing twin sisters after they left their home in home in Mountsorrel, Leicestershire