Sharon Osbourne has thanked rapper Jamal Rajad for helping save her daughter Aimee’s life following a Hollywood studio fire that took the life of one person and injured two others.

The former X Factor judge, 69, took to her Instagram Stories on Friday to share her gratitude for the part the rapper played in saving her 38-year-old daughter’s life by replying to a comment from Rajad’s wife Pretty Face Ray’Ray, who is also a rapper.

Sharon wrote: ‘Your husband alerting her literally saved her life. THANK YOU @pretty.face.rayray.’ 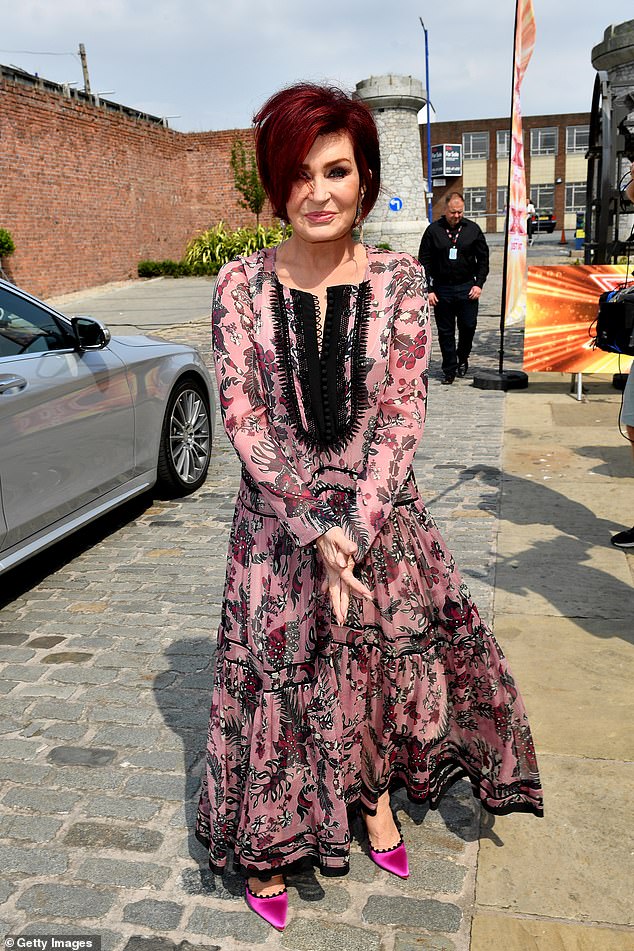 Tragic: Sharon Osbourne has thanked Jamal Rajad for helping save her daughter Aimee’s life following a Hollywood studio fire that took the life of one person and injured two others

In the original comment, Ray’Ray had written: ‘ASKED MY HUSBAND TO CATCH HER (Aimee) SO SHE CAN JUMP OUT OF THE SECOND FLOOR AFTER HE WAS YELLING LETTING EVERYONE IN THE BUILDING KNOW. GLAD SHE DIDN’T HAVE TO [JUMP] AND SHE WAS OKAY.’

The blaze was reported Thursday evening around 6.35 pm local time and quickly spread throughout the two story building in Hollywood. 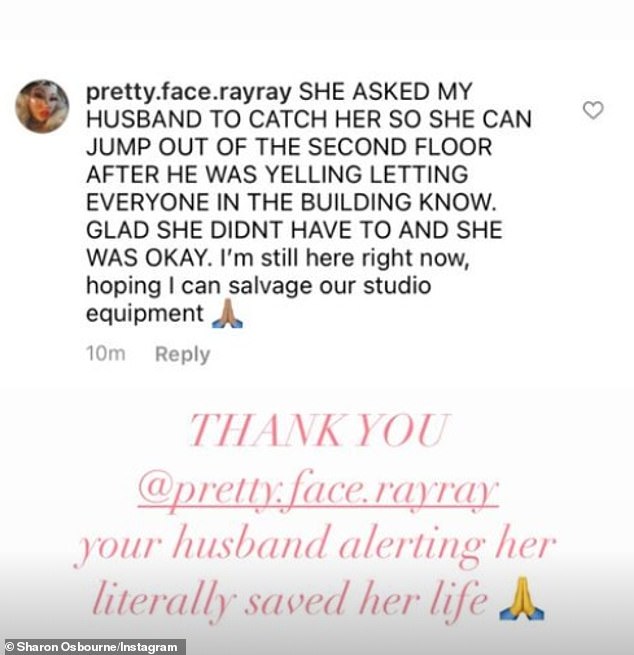 Grateful: The former X Factor judge, 69, took to her Instagram Stories on Saturday to share her gratitude for the part the rapper played in saving her 38-year-old daughter’s life

Aimee returned to the site on Friday, with fire investigators on the scene, and was seen hugging record producer Jamal Rajad Davis, who is credited with sounding the alarm about the fire.

‘I was my own smoke detector,’ Jamal told the Los Angeles Times. ‘I ran to my room and grabbed my stuff and left my door open, trying to call my cats out to follow me.’

Jamal said he tried to go back in to save his four cats, but the smoke was too thick and all the animals died. 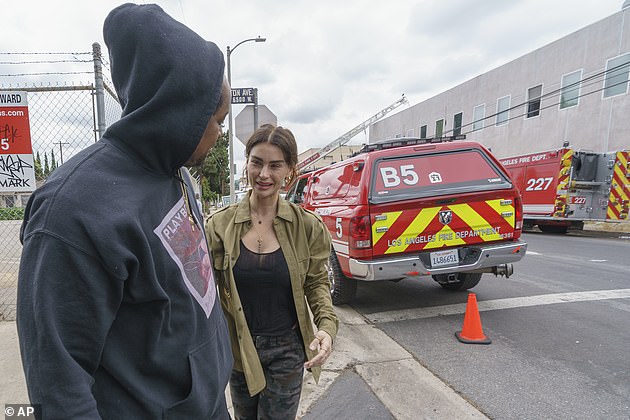 Thank you: Aimee visited the scene Friday of a deadly fire where she and her music producer nearly lost their lives Thursday night in a fast burning blaze that killed one person 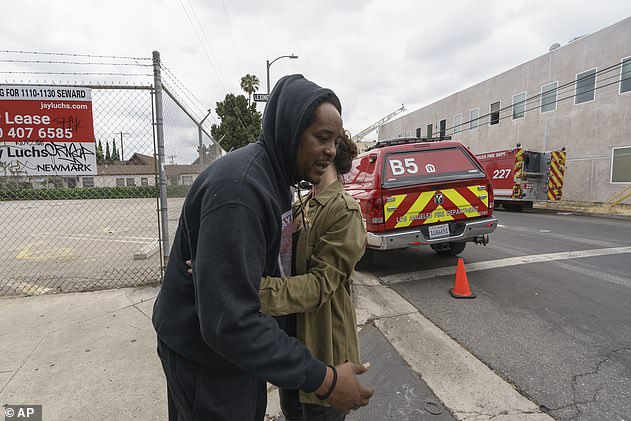 Hugs:  The synth-pop artist hugs record producer Jamal Rajad Davis, who is credited with sounding the alarm about the fire.  Jamal escaped, but his four cats perished in the blaze

A hip-hop artist who goes by the name Maximilian told KABC-TV that he lost everything.

‘I opened the door, I saw smoke coming from across the hall. I immediately reached ]over to grab a jug of water. I threw it at the door, flames bursted [sic]. I tried to go back to my room and grab anything I could, but flames were everywhere, and we ran out the building, and that was it.’

Battling the blaze:  It took 78 firefighters nearly an hour to battle the blaze 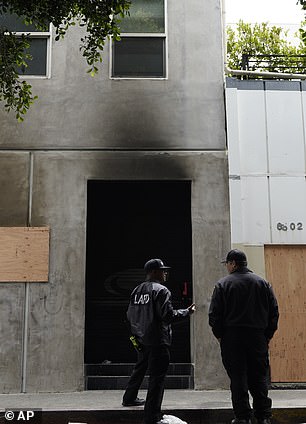 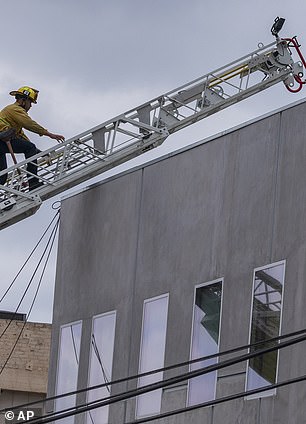 Loss:  The facility was home to several recording studios and rehearsal spaces.  One artist who worked there estimated his loss at $50 thousand

It was Sharon who first revealed her oldest daughter’s narrow escape and resulting injury in an emotional social media post Friday morning.

The reality star shared the shocking news on Instagram, tagging a Los Angeles Times story about the deadly incident.

The Raining Gold crooner appeared to be doing well when she was seen Friday arriving at her parents’ house, wearing a low key outfit of camouflage patterned jeans, sneakers and a t-shirt, with a khaki green military style jacket. 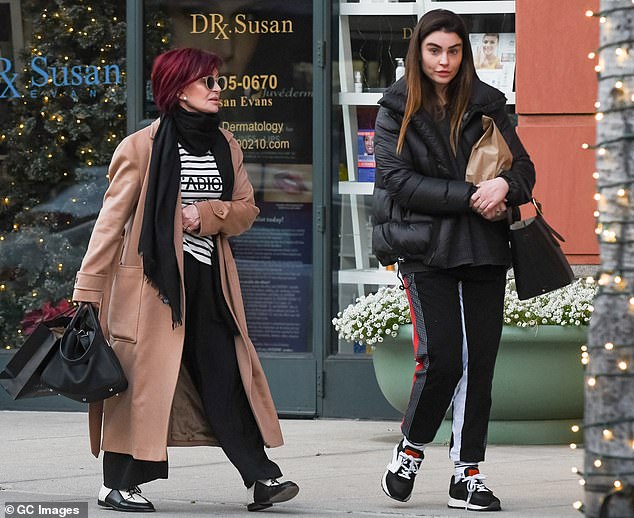 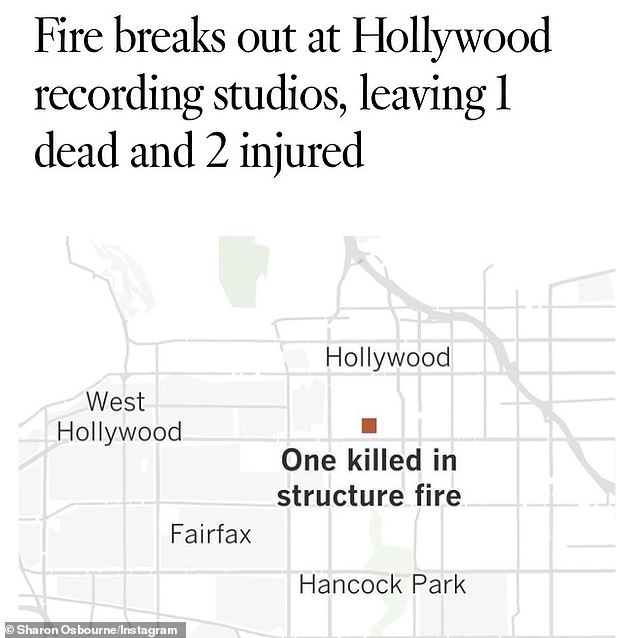 Sad news: The reality star, 69, shared the shocking news on Instagram in a post tagging a Los Angeles Times story about the deadly incident

Writing on social media, The Osbournes star claimed that both were lucky to be alive.

‘It is utterly heartbreaking that someone lost their life today in this fire [and] we are sending our prayers to this person [and] their family. What happened today was beyond horrific,’ said the star.

Dancing with the Stars host Carrie Ann Inaba responded to the post writing, ‘Glad that Aimee and her producer are safe…but my heart is hurting for the person who lost their life and their family and loved ones. How scary it must have been for all of them…’ 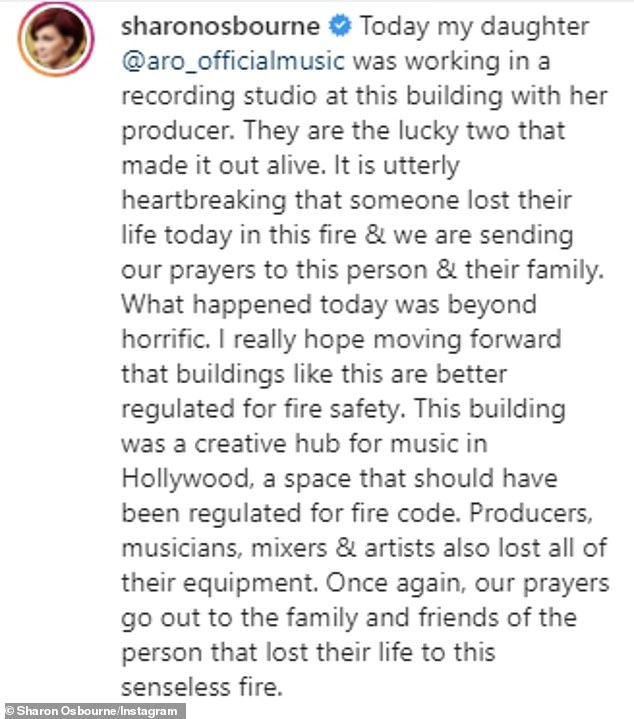 Sharon described the building as a ‘creative hub for music in Hollywood’ and also lamented the loss of equipment that belonged to the various artists who worked there.

She also called for better fire safety at such buildings, although it’s not yet known if any codes were violated.

Escape: Aimee, 38, and her music producer escaped the flames, but both were treated for smoke exposure. The name of the victim has not been released

The Talk co-host ended her emotional post writing: ‘Our prayers go out to the family and friends of the person that lost their life to this senseless fire.’

Aimee, who goes professionally by ARO, her initials, has yet to speak publicly about the life threatening scare.

The actress is the lesser known member of the Osbourne family as she declined to be a part of the reality show which made Sharon, Ozzy, 73, Kelly, 37, and Jack, 36, making them household names during its run from 2002-2005. 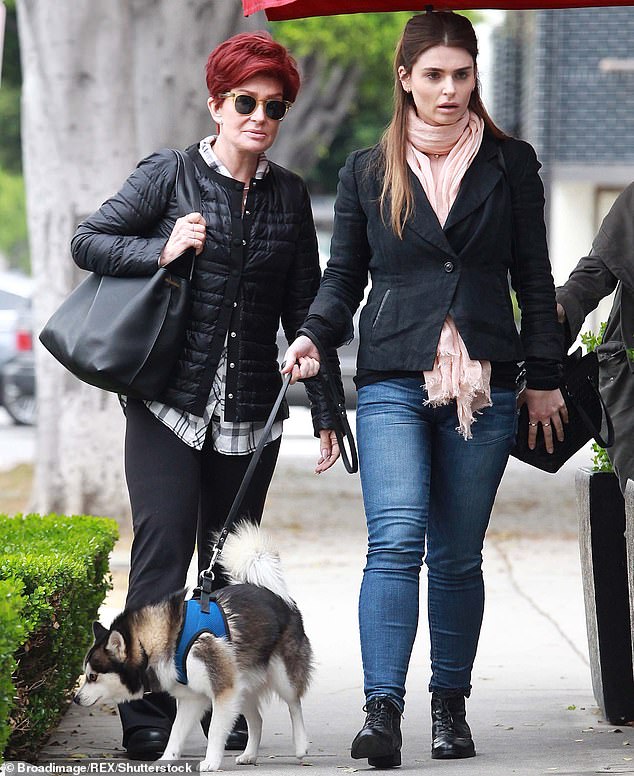 Aimee, who goes professionally by ARO, her initials, has yet to speak publicly about the life threatening scare. Sharon wrote ‘our prayers go out to the family and friends of the person that lost their life to this senseless fire.’ Pictured LA March 2016

She has appeared in a few family projects, including documentaries and interviews about her father and his career as the frontman for Black Sabbath.

The versatile artist has provided some voice work in Postman Pat: The Movie and starred as Raquelle in the TV movie Wuthering Heights.

Aimee has been focusing on her music career of late. The singer released her latest single, Against Mine, in April. 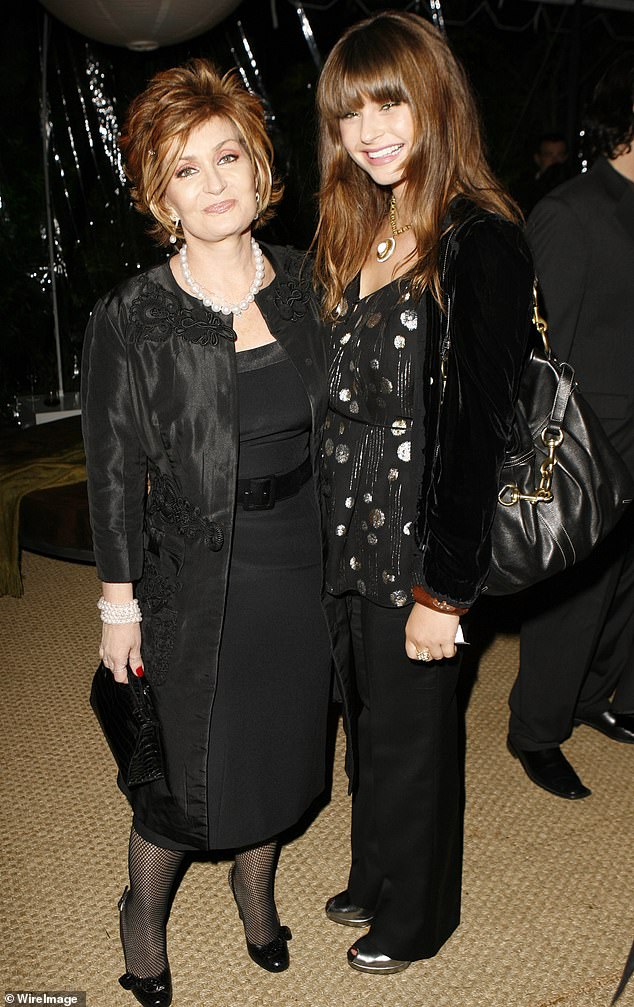 Family: Aimee, 38, is the lesser known member of the Osbourne family. She declined to be part of The Osbournes during its from from 2002-2005. She is now focusing on her music career. Pictured LA, 2006

She’s currently in Mallorca on a romantic getaway.  And on Monday, Love Island‘s Francesca Allen, 26, displayed her slim frame...
- Advertisement -

Not “Solo” anymore.Demi Lovato has a new musician boyfriend, People reported on Monday.“It’s a really happy and healthy relationship,”...

Manchester United footballer is blamed for truly hurting his...
News

Pete Davidson has reportedly been in “trauma...
Celeb Zone

She’s currently in Mallorca on a romantic getaway.  And on...
Entertainment

Not “Solo” anymore.Demi Lovato has a new musician boyfriend,...
News

10 Things You Don’t Know About Blu of Earth

Nikane Madeira is worldwide famous as a sibling of...
Business

People traffickers have launched a £1,500-a-person ‘summer sale’ to...
- Advertisement -