Surveillance footage caught the shocking moment a New York City bodega worker allegedly stabbed a customer to death, after the man violently confronted him about the price of some snacks.

Video shows the employee – 51-year-old Jose Alba – sitting behind a counter at the Hamilton Heights grocery store, tending to customers on Friday night.

A man then pushed Alba into a shelf and appears to confront him, before yelling at another customer trying to purchase something.

He pulls Alba up out of the chair, at which point Alba reaches to the right toward shelves displaying an assortment of candy, and pulls out a large knife, which he allegedly plunges into the man’s neck and chest at least five times.

The two could be glimpsed struggling off-camera, as blood splatters across the victim’s white t-shirt and along Alba’s arms.

By the time he comes back into view, Alba could allegedly be seen holding the bloodied knife with blood splattered across his arm.

The customer, who was later identified as 37-year-old Austin Simon, was transported to Harlem Hospital where he was pronounced dead.

Alba has been charged with murder and criminal possession of a weapon. He faces 25 years to life in prison if convicted.

In the meantime, local residents have rallied around Alba, tweeting out the hashtag #FreeJoseAlba.

They claim he was acting in self-defense and say Simon was a known gang member. 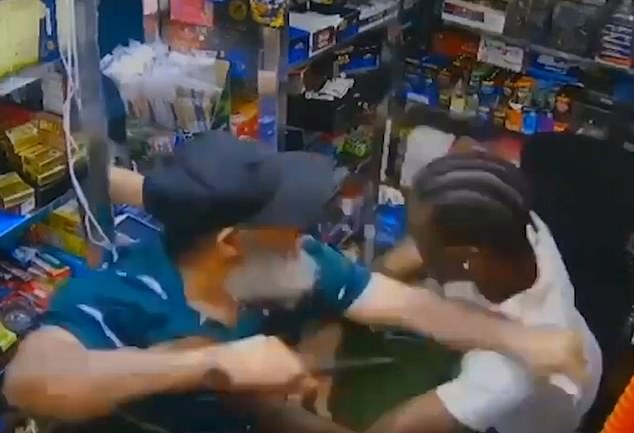 Surveillance footage caught the moment Jose Alba, 51, a store clerk at a Hamilton Heights bodega, stabbed 37-year-old Austin Simon after Simon pushed him into some shelves

According to the NYPD, the incident began at around 11pm on Friday after a woman entered the store with her 10-year-old daughter to buy several items.

But the woman’s EBT card was declined, according to a criminal complaint obtained by the Daily News, and Alba reached over the counter to take the snacks away from the girl.

At that point the woman became enraged and summoned Simon – her boyfriend.

‘The lady threw everything from the counter and the machine too,’ Maad Ahmad, the owner of the Blue Moon Convenient Store told the Daily News, referring to the card reader.

Simon then walked around the counter and confronted Alba – leading to the confrontation caught on surveillance footage.

‘He grabbed Jose by the neck and tried to get him to apologize to the girl,’ Ahmad said, adding: ‘He pushed Jose first, Jose was just defending himself.

But allegedly, he wound up stabbing Simon at least five times.

According to police records, Alba told officers on the scene: ‘He wanted me to come apologize to the girl. I took the knife we use to open boxes, and I stabbed him.’

Court documents also claim that Simon’s girlfriend took a knife out of her purse and stabbed Alba in the arm, but she is not being charged.

Alba was then reportedly brought to a local hospital for his wounds before being incarcerated.

‘The girlfriend is still out there enjoying her life,’ a store employee told DailyMail.com on Wednesday, noting she ‘ran out’ after the alleged stabbing. 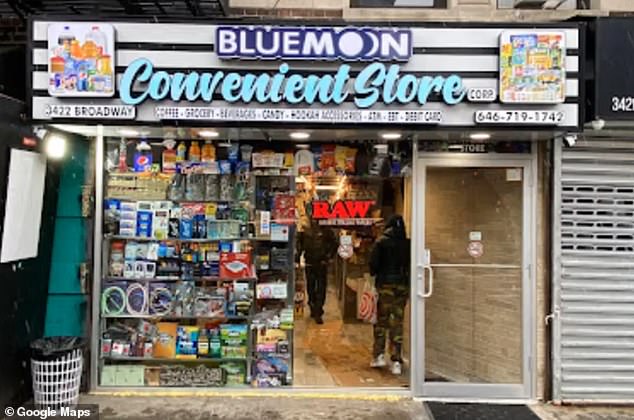 Several New Yorkers have now tweeted out the #FreeJoseAlba, who is being represented by a public defender, and a GoFundMe set up by his daughter Danny has raised almost $20,000 for his defense.

‘Half of the ‘hood is so shocked,’ a man shopping at the store said of Alba’s incarceration, noting that he could not even kill a cockroach.

Regulars at the shop described Alba as a hard-working father who was preparing for retirement, and was looking forward to returning to the Dominican Republic next week to visit his family.

He worked at the store every day of the week from noon to 6am, they told DailyMail.com, to ‘make an honest living.’

But during his more than two years working at the store, several patrons have tried to take advantage of him, grabbing items and trying to walk away with them.

One man even once held up a gun to him, they said.

So when Simon entered the store and starting threatening him last week, he did not know whether he had a gun and could kill him.

‘He never wanted no problem,’ said Ahmad’s son, who was working the counter on Wednesday.

‘I picture him as my grandfather being in that situation.’ 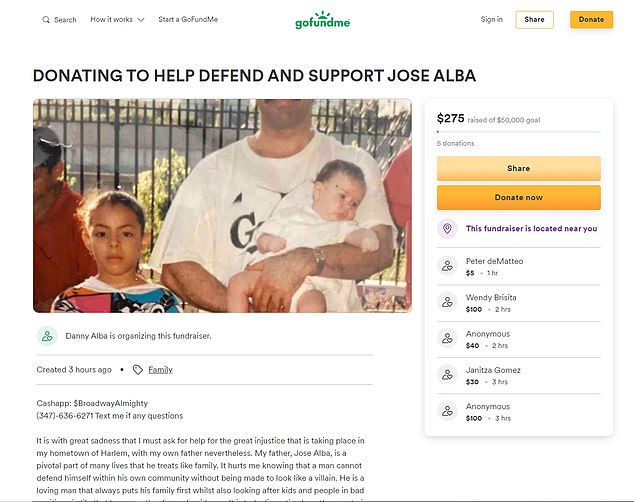 A GoFundMe set up by Alba’s daughter Danny on Wednesday already raised more than $200 for his defense as residents claim he was acting in self-defense. By Wednesday night, the total had risen to $20,000

Danny Alba writes on the fundraising page: ‘It is with great sadness that I must ask for help for the great injustice that is taking place in my hometown of Harlem, with my own father nevertheless.

‘It hurts me knowing that a man cannot defend himself without being made to look like a villain.’

She described her father as ‘a loving man that always puts his family first whilst also looking after kids and people in bad positions in life that have no other form of guidance.’

She added: ‘It is truly disgusting how they are trying to keep my dad in jail for protecting himself from a person who physically and verbally assaulted him before he took any action to protect his own life.

‘If there is any justice left in the judicial system please let it work here, in the place where I was born and raised, Harlem.’

Residents also told DailyMail.com that Simon was a known gang member, and would often talk about being in a gang.

Records obtained by DailyMail.com show he has been incarcerated several times – most recently in 2020, on assault and attempted assault charges.

He was then released from prison in May 2021.

‘We want justice, we want no problems,’ store employees said.

One regular at the bodega claiming if Alba isn’t freed: ‘We have no law here in this city.’

Donald Trump says that the FBI has returned his passports following their raid on his Mar-a-Lago home as he...

Notoriously private Dannii Minogue has opened up about her romance with Adrian Newman.  The singer has been dating the hunky...