By Sam Joseph Semon For Dailymail.com

Sofia Vergara and Heidi Klum were the picture of style on Sunday.

The television personalities showcased their fabulous fashion sense while kicking off season sixteen of America’s Got Talent in Los Angeles.

The upcoming season of the talent contest series will be the second to air under modified protocols, which have been put in place due to the onset of the global pandemic. 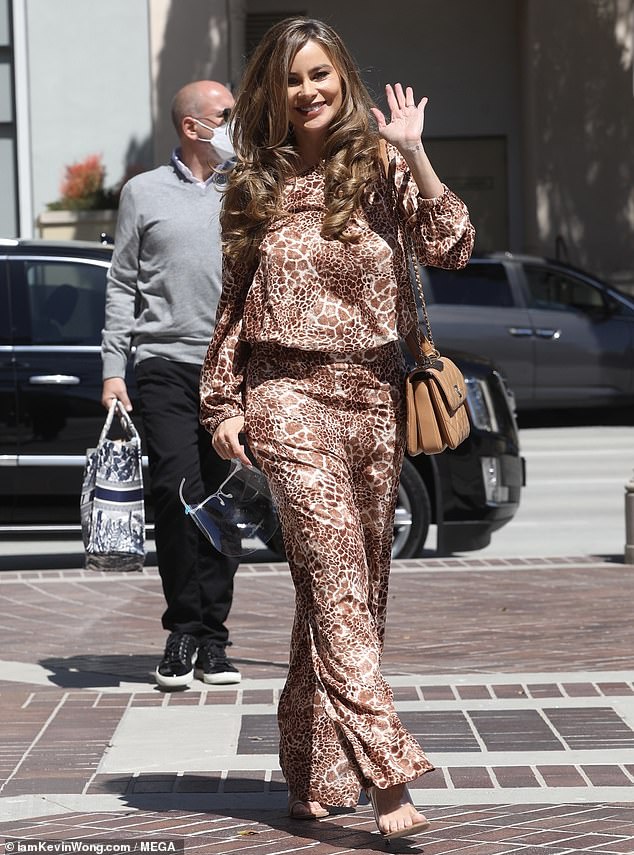 Back for work! Sofia Vergara and Heidi Klum were spotted arriving for the taping of the first episode of America’s Got Talent’s sixteenth season on Sunday

Vergara looked ready for the day’s work as she wore a brown-and-white patterned long-sleeve with a matching set of pants.

The 48-year-old tied off her outfit with a pair of heeled shoes and carried a light brown leather bag with her while heading to the show’s taping.

The Chef actress’ gorgeous dark blonde hair fell onto her shoulders and backside as she strutted down the city’s sidewalks.

Klum kept it much more casual as she wore a slightly oversized white t-shirt by Dolce And Gabbana which featured the phrase ’90’s supermodel’ printed across its front. 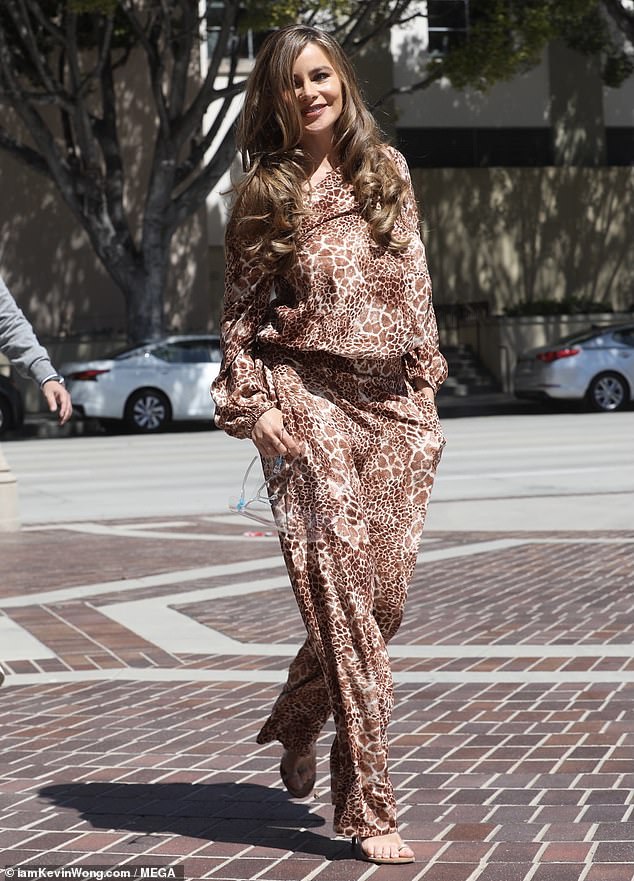 Looking good: Vergara wore a brown-and-white patterned long-sleeve blouse and a matching set of pants as she arrived at the show’s taping 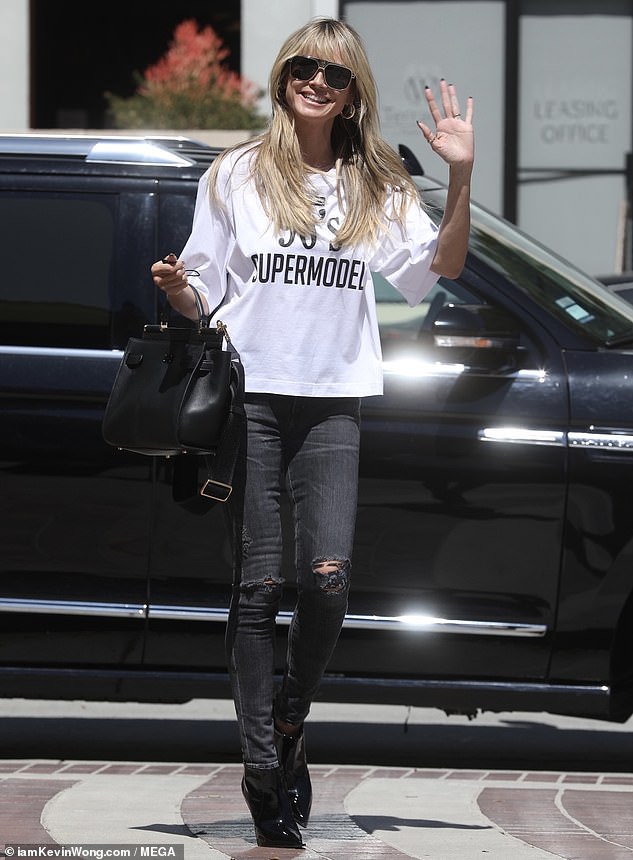 Good to be back: Klum appeared to be happy to be returning to the set of the talent contest show, which underwent a troubled production process last year

She paired her top with a pair of ever-so-slightly distressed gray jeans and a set of heeled black leather shoes while carrying a large bag to store her belongings.

The 47-year-old accessorized with a pair of large sunglasses, two rings worn on her left hand and a small set of hoop earrings.

The bright shade of the former Victoria’s Secret Angel’s gorgeous blonde hair contrasted well with the flatter tones of her outfit.

The third host to arrive at the show’s taping was Howie Mandel, who appeared to be enthusiastic to get back to work. 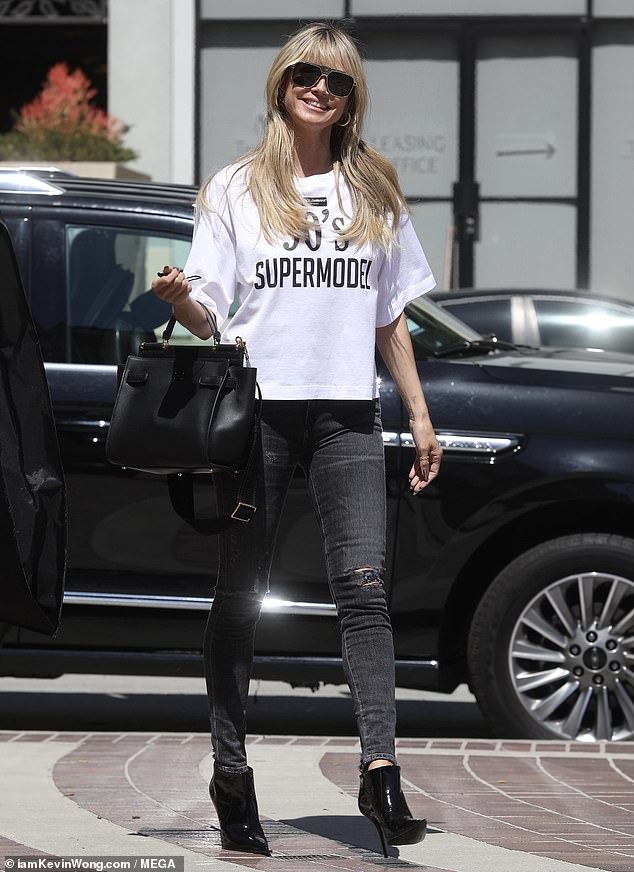 Taking it easy: The former Victoria’s Secret Angel was seen wearing a slightly oversized t-shirt and gray jeans as she arrived at the show’s taping 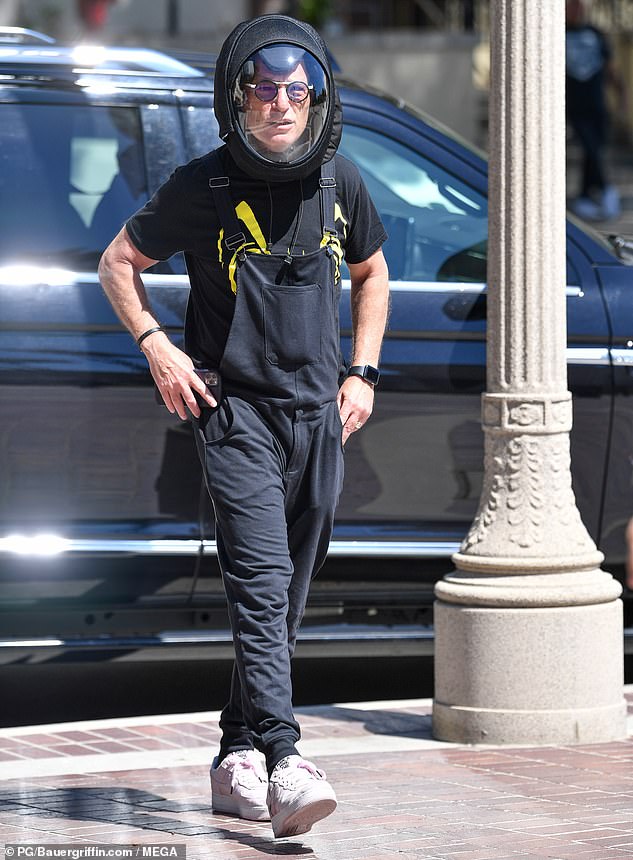 There he is: Howie Mandel was also seen showing up for work alongside his co-hosts

The 65-year-old comedian kept it casual in a set of overalls worn on top of a black t-shirt and a pair of pink sneakers.

The noted germaphobe notably wore a large plastic-faced helmet to keep himself extra protected from COVID-19 while stepping out in public.

While relaxing before the show’s taping, Vergara and Klum posed together for a mirror picture that was later posted to the former’s Instagram account.

The Modern Family actress expressed her enthusiasm for the taping of the first episode of the series in the post’s caption as she wrote, ‘We r readyyyyy.’ 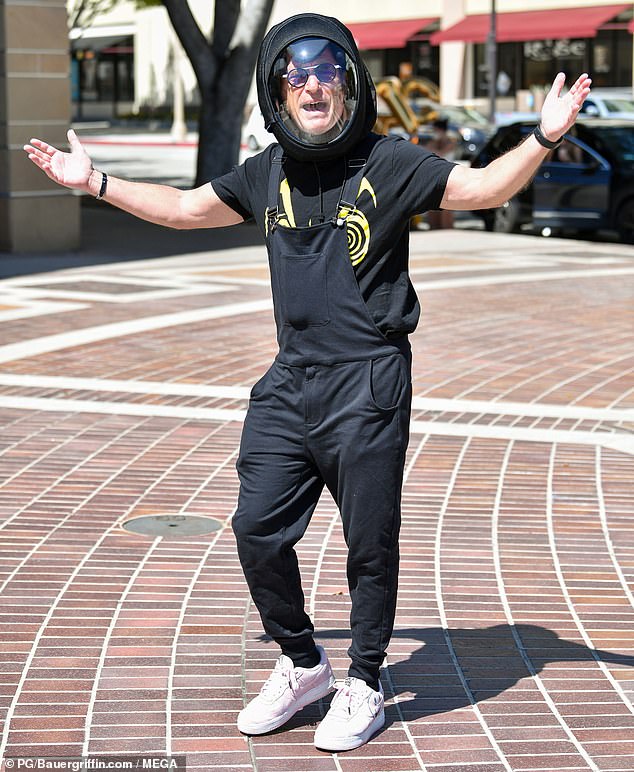 Extreme precaution: The noted germaphobe wore a large head covering while arriving at the taping’s venue 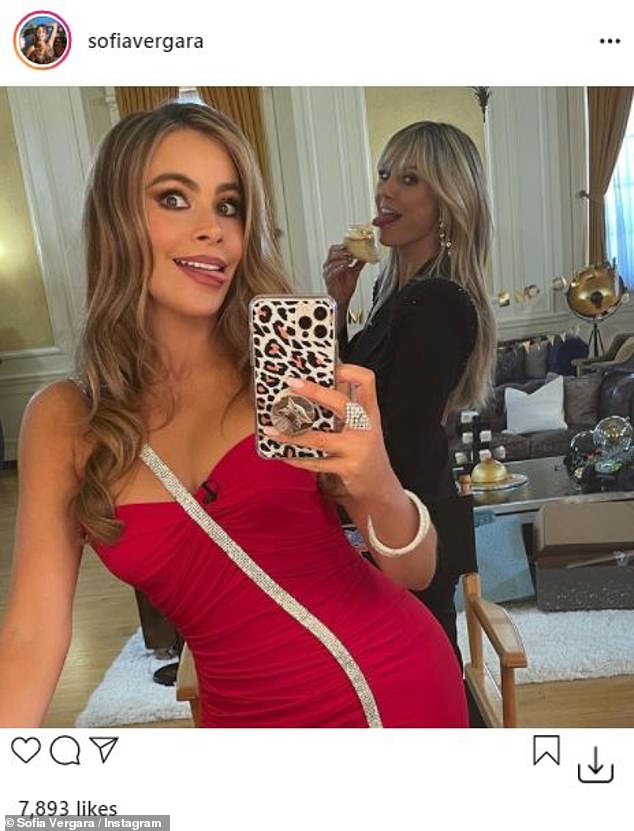 Backstage fun: Vergara later posted a photo to herself wearing Dolce And Gabbana to her Instagram account showing her and Klum spending time together before the start of the taping

The two switched out of their previous outfits for the shot, with the Machete Kills actress wearing a striking red dress.

She also made two posts to her Story, the first of which showed her standing in front of a neon sign; the text added to the post read ‘We r back!!!!’

Vergara’s second entry showed her holding up a cupcake with a small decoration bearing the face of Simon Cowell, who had to leave last season early due to suffering a back injury part of the way through filming.

The sixteenth season of America’s Got Talent was confirmed last month after the fifteenth set of episodes underwent a troubled production process. 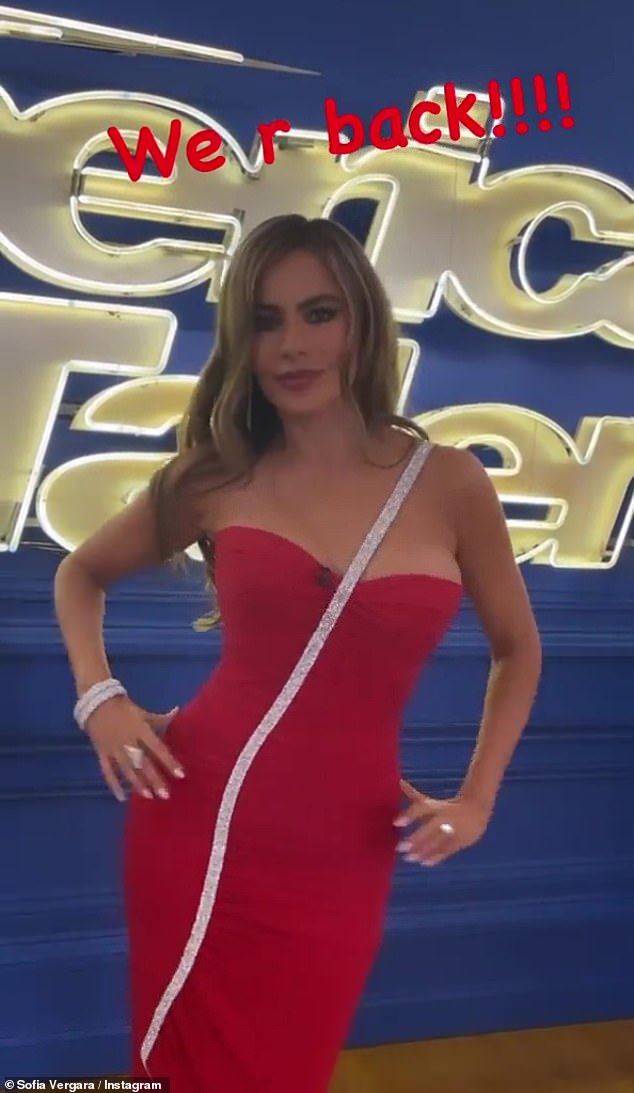 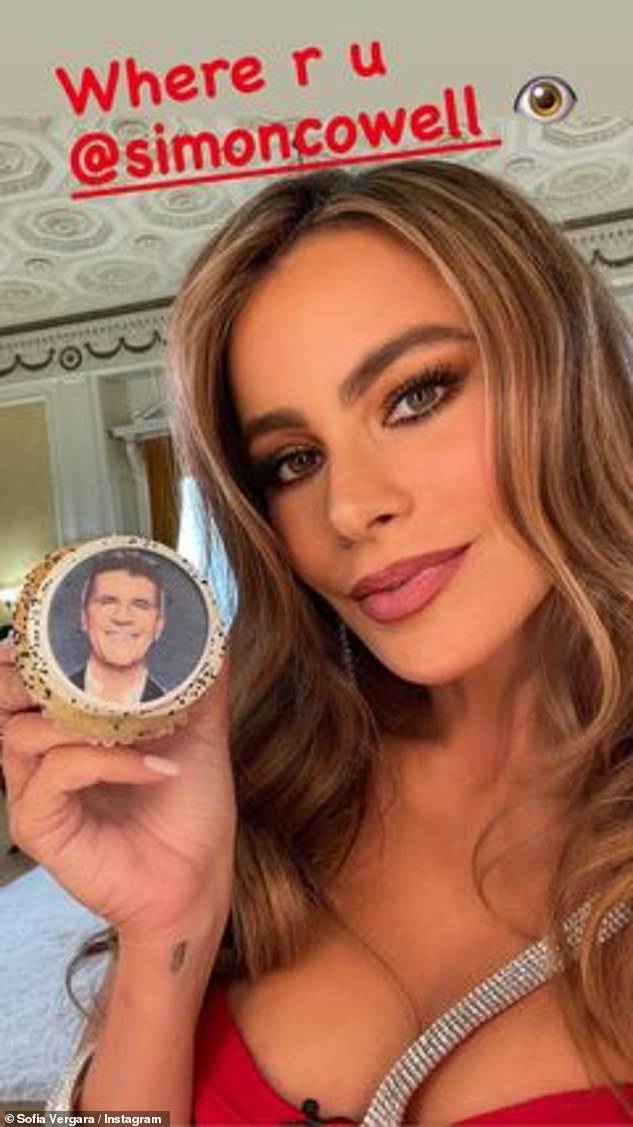 Back in business: She also posted a photo showing her holding a cupcake bearing longtime host Simon Cowell’s face; the show’s creator had to leave the series early last season due to suffering an injury

As the global pandemic grew worse, the show’s producers decided to stop allowing audiences to attend auditions, before production was shut down entirely and the series was placed on a hiatus.

The program’s filming eventually resumed, with further health-minded restrictions in place for the shooting of the remaining episodes.

All of last season’s judges will return for its newest set of episodes, along with longtime host Terry Crews.

The sixteenth season of America’s Got Talent is set to premiere on June 1st. 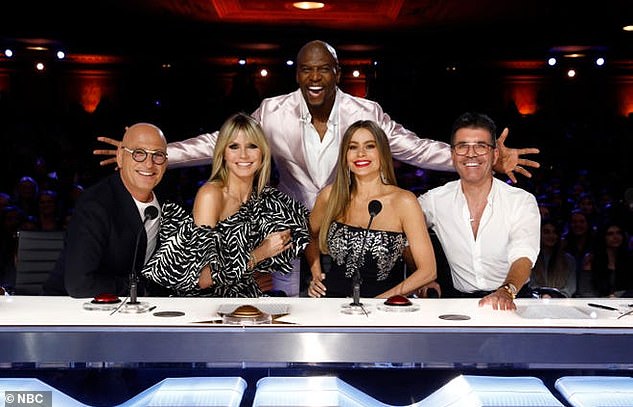 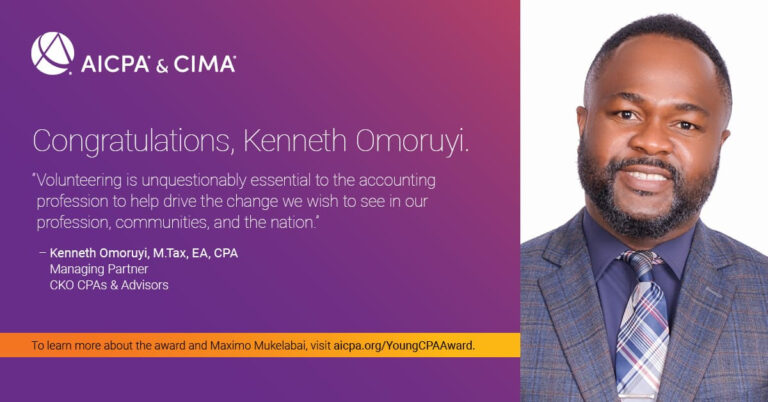 The American Institute of CPAs has recognized six practicing CPAs as recipients of the 2022 AICPA Outstanding Young CPA Award in Honor of Maximo Mukelabai. “These individuals have done incredible work to help develop and spread the passion for the accounting profession,” said Crystal Cooke, director of diversity and inclusion for the Association of International…

Back when Democrats were freaking out about the “Don’t Say Gay” bill that was on the table, conservatives started calling these teachers introducing sexuality into their kindergarten classes “groomers.” And it struck a nerve. Word went out in the media that “groomer” was an anti-LGBTQIA+ slur that insinuated gay and trans people were pedophiles. This…

‘Writer, critic, editor’, Maud Newton, tweeted that Governor Ron DeSantis’s use of the term ‘biblical’ to describe the storm surge on Sanibel Island was nothing less than ‘an evangelical dog whistle’. Yes, that’s right, using common idioms is now a dog whistle. The next time you hear someone say ‘go the extra mile’, understand that… 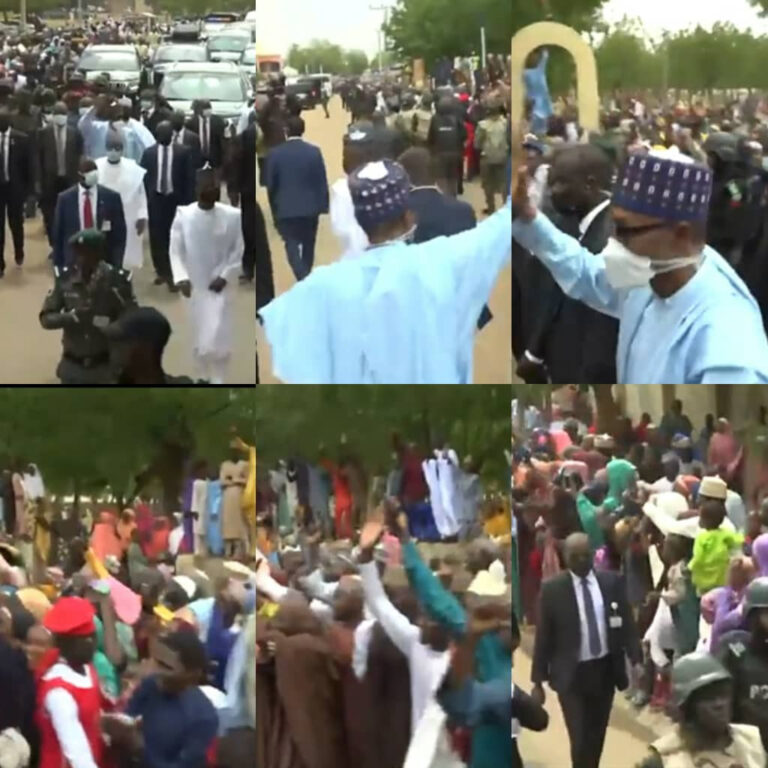 Residents of Daura community in Katsina state came out in their numbers to cheer and greet President Buhari as he walked back to his residence after observing his Sallah prayers at the Eid ground in the community today July 9. Watch a video showing this moment below…      View this post on Instagram           A post shared by Lindaikejiblog (@lindaikejiblogofficial)   The… 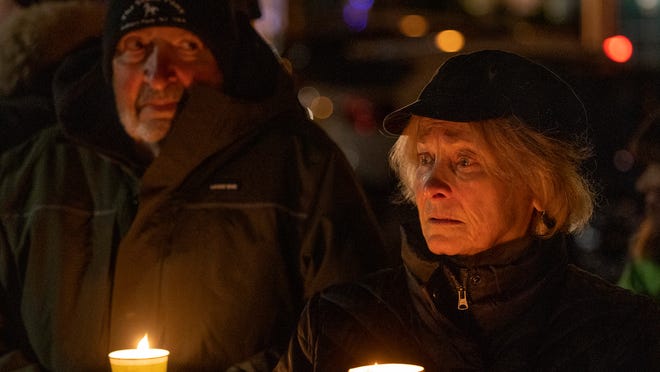 ASBURY PARK – For the first time since the QSpot was established in 2005, co-founder MaryAnn Vitiello said she felt a sense of fear this week coming to the LGBTQ community center on Asbury Avenue. “I came here yesterday for my weekly meeting and I felt uncomfortable, I felt afraid,” Vitiello told a crowd who…

An arrest warrant was issued on Thursday for troubled former NFL wide receiver Antonio Brown by authorities in Tampa, allegedly on charges of domestic battery committed against Brown’s ex-fiancée earlier this week. The incident reportedly occurred on November 28, with a judge denying a petition for temporary risk protection order a day later to prevent him…