‘I’m 90% sure I was invited because I have a song called “22”.’ Taylor Swift delivers rousing commencement speech at NYU as she receives honorary Doctor of Fine Arts degree

By Heidi Parker For Dailymail.com

Taylor Swift cracked a modest joke as she delivered a college commencement speech after being awarded an honorary doctorate.

The superstar told thousands of New York University graduates at the Yankee Stadium: ‘I’m 90% sure I was invited because I have a song called “22”.’

The 32-year-old singer-songwriter received an honorary Doctor Of Fine Arts degree from New York University on Monday. The Red pop star, who went straight into the music business after graduating high school a year early, addressed the graduating class at the distinguished school.

Swift also delivered a sound piece of advice to the students, who cheered her eloquent words, telling them that getting into embarrassing scrapes was just a fact of life.

‘Learn to live alongside cringe,’ she said

‘No matter how hard you try to avoid being cringe, you will look back on your life and cringe.’

Swift added: ‘Life can be heavy, especially if you try to carry it all at once.’

She urged students to think of whoever had cared for them as a child, and answered all their questions growing up, however ridiculous. The music icon suggested students should think of a way to thank that person if they were in the crowd with them, or remember them if they’ve since died.

‘Wearing a cap and gown for the very first time – see you soon NYU,’ the crooner wrote in an Instagram post as she was seen heading to Yankee Stadium in New York where the event will take place. 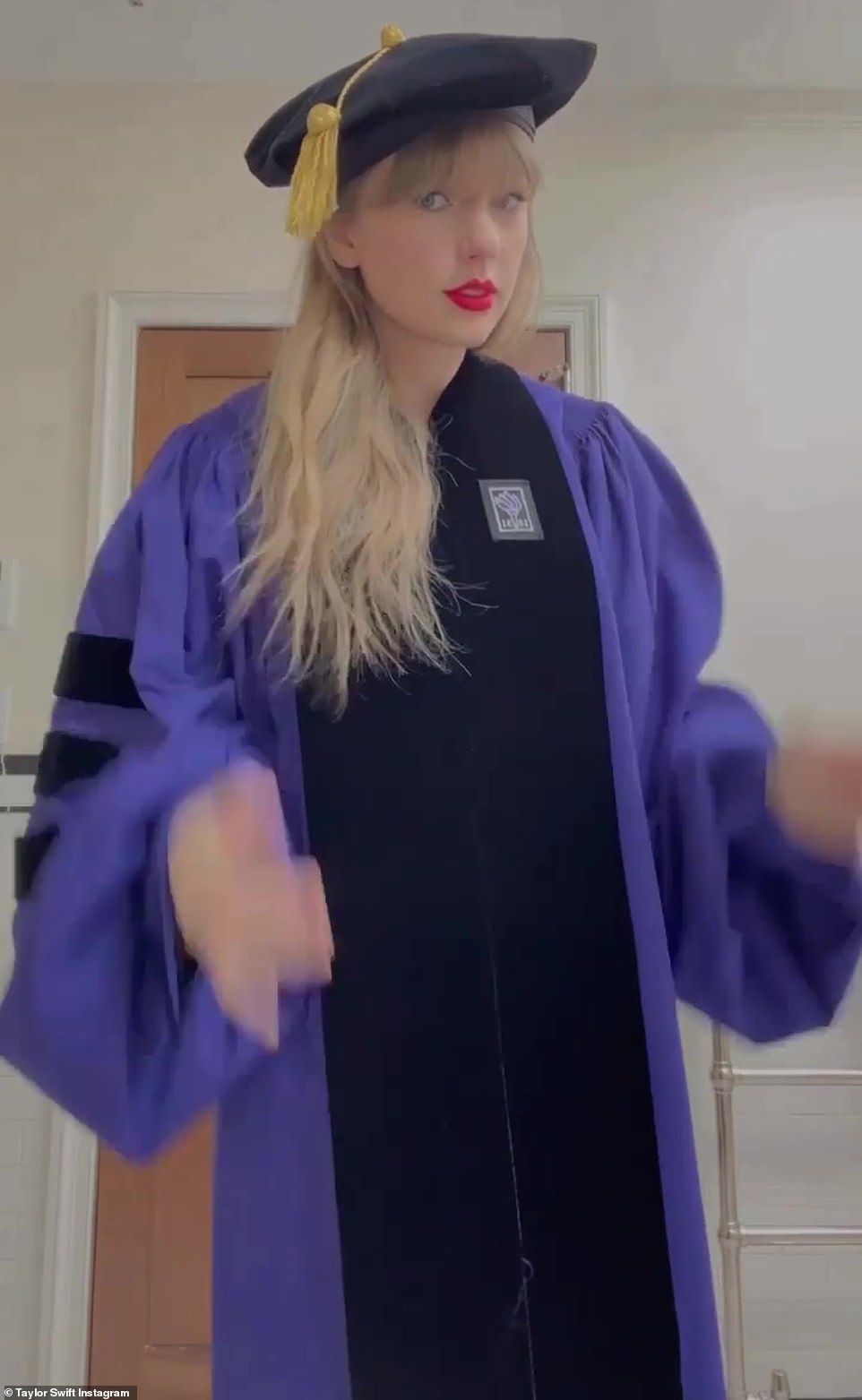 Grad girl: Taylor Swift was seen with her cap and gown on in a new social media post 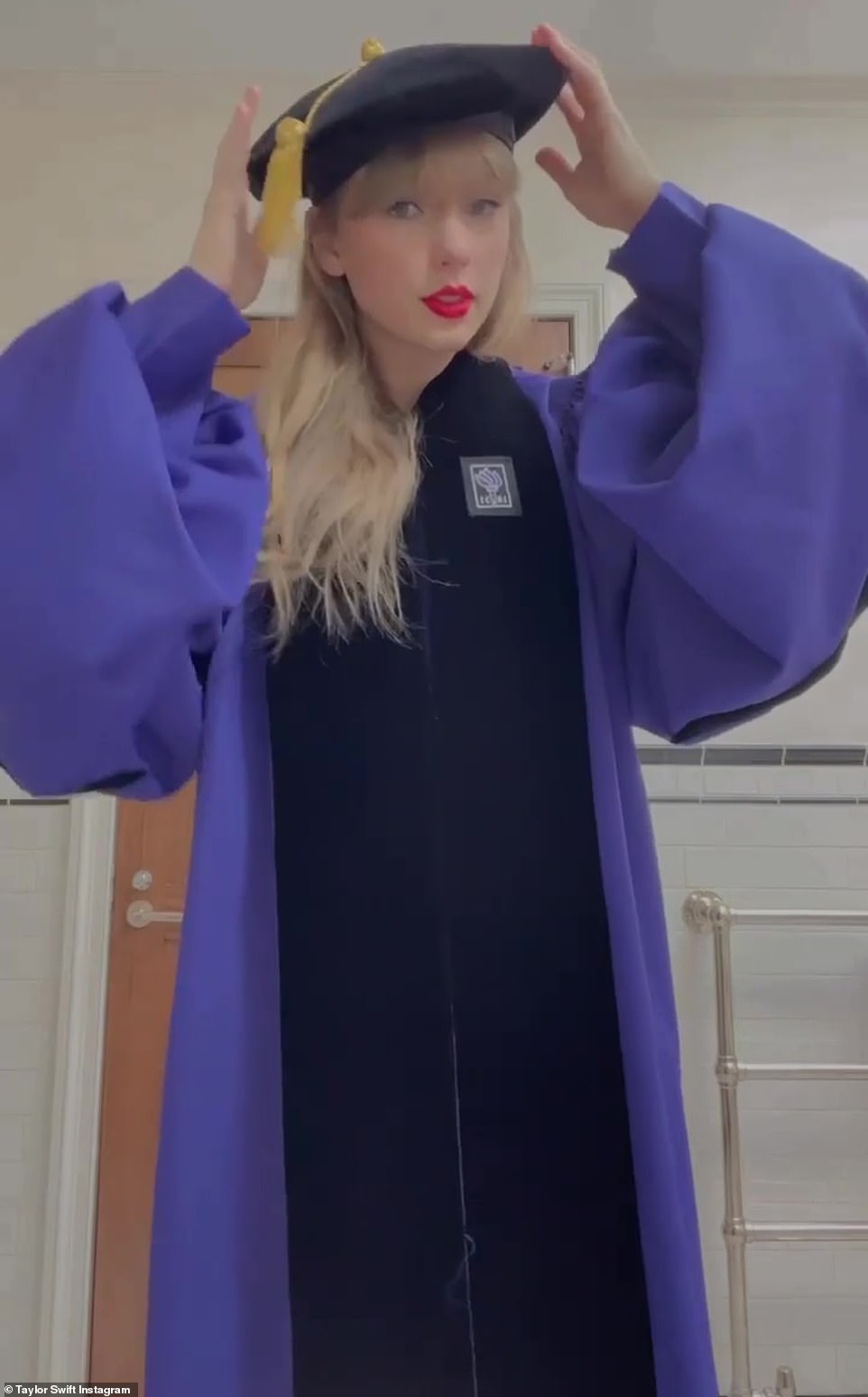 In the spotlight: The 32-year-old singer-songwriter is set to receive an honorary Doctor Of Fine Arts degree from New York University on Monday. The Red pop star will also address the graduating class at the distinguished school

The star wore her long blonde hair down with bright red lipstick. The purple and black gown was worn over a black sleeveless dress as she also had on high heels with a fun leopard print.

The ceremony is scheduled to take place Monday at Yankee Stadium.

The honorary degree will be a first for Taylor as her career was well underway from the time she graduated high school. 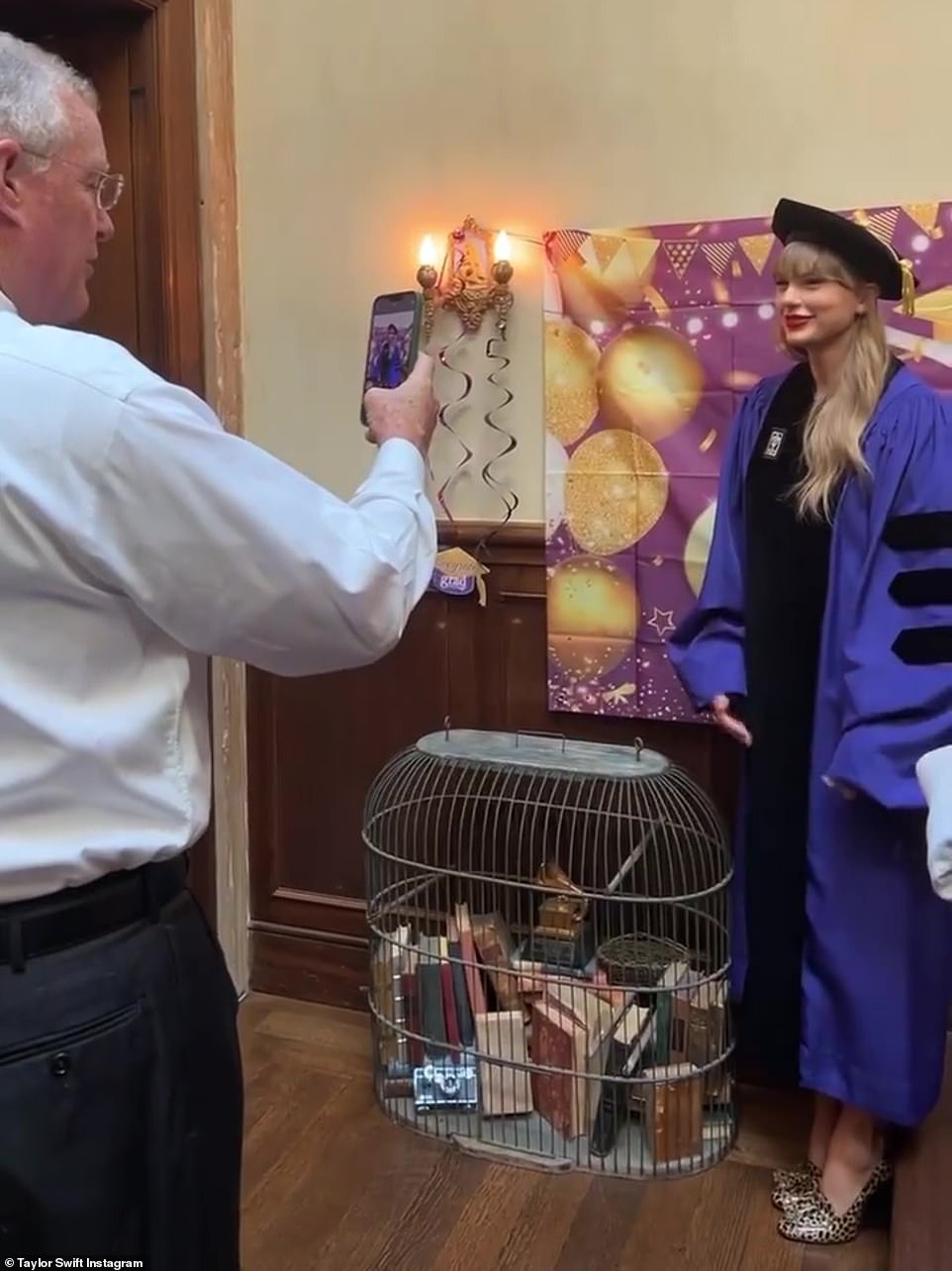 Nice kicks: The hit maker also had on high heels with a fun leopard print. Her father Scott Kingsley Swift, 70, took the photo 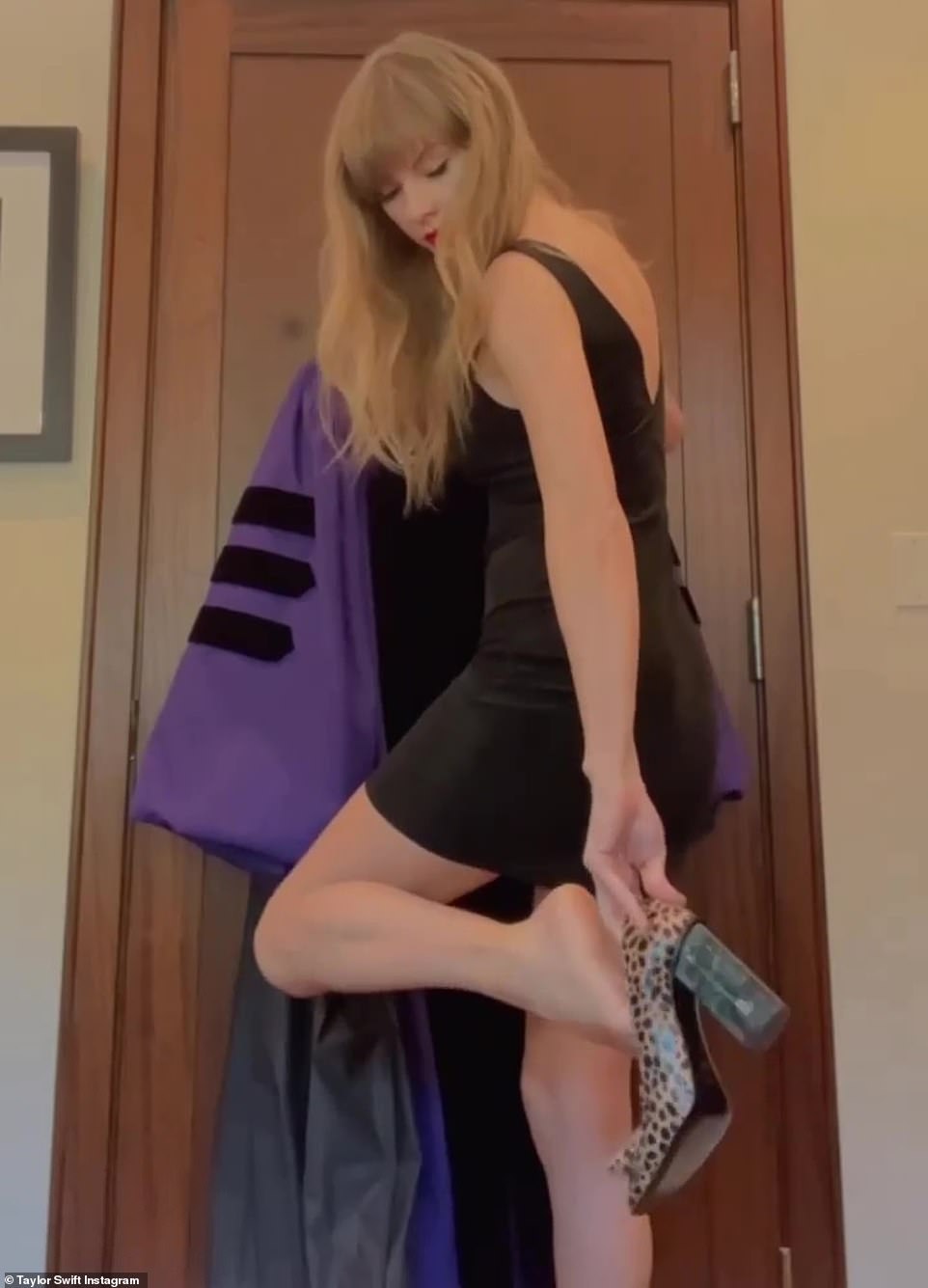 The under look: The purple and black gown was worn over a black sleeveless dress as she also had on

NYU’s commencement will acknowledge the 2020, 2021 and 2022 graduating classes, due to the pandemic.

The university announced the upcoming plans in March.

‘I cannot overstate how thrilled I am to be coming together in person with graduates, parents, faculty, and honorees for NYU’s Commencement,’ NYU president Andrew Hamilton said in a press release. 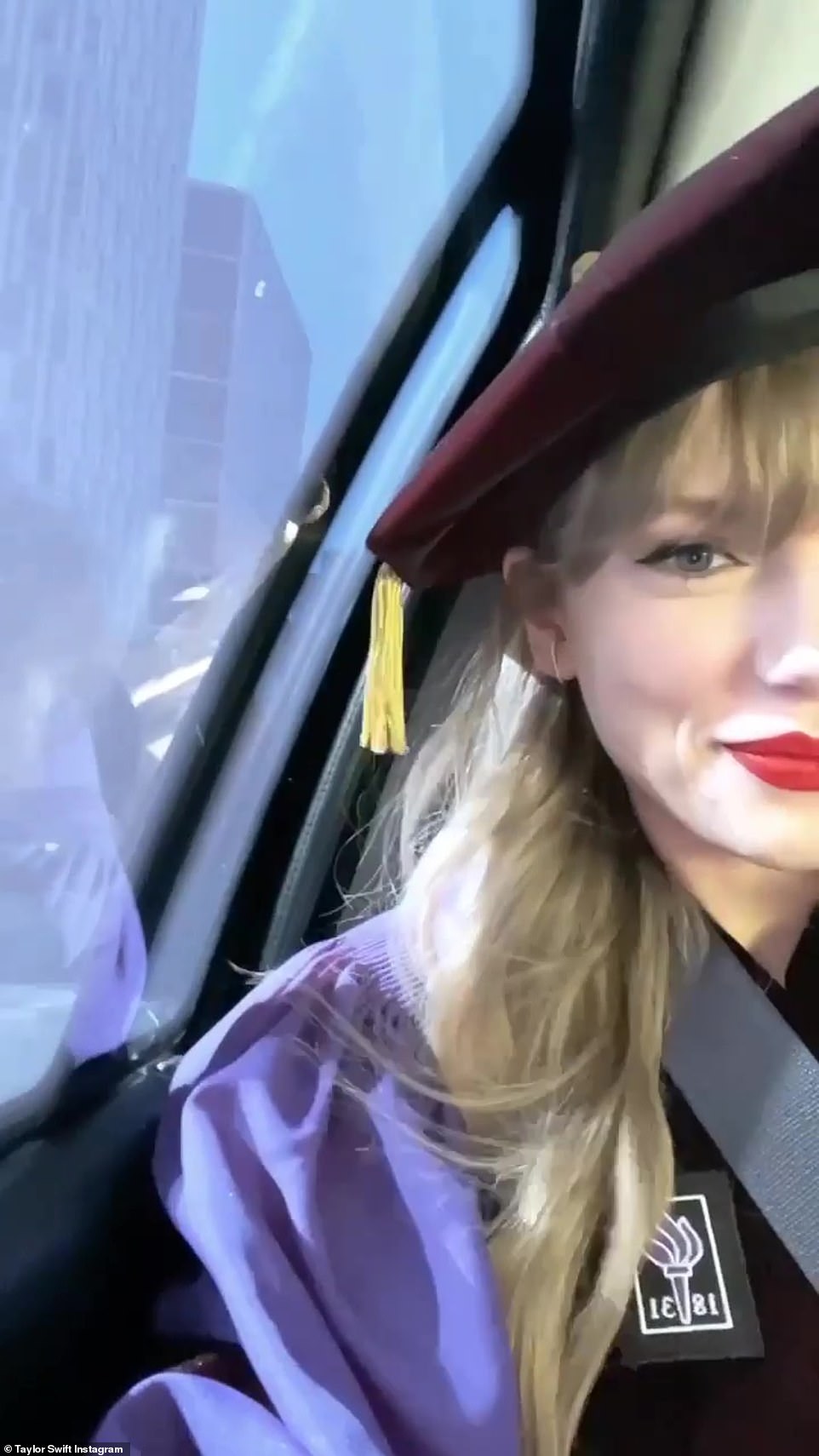 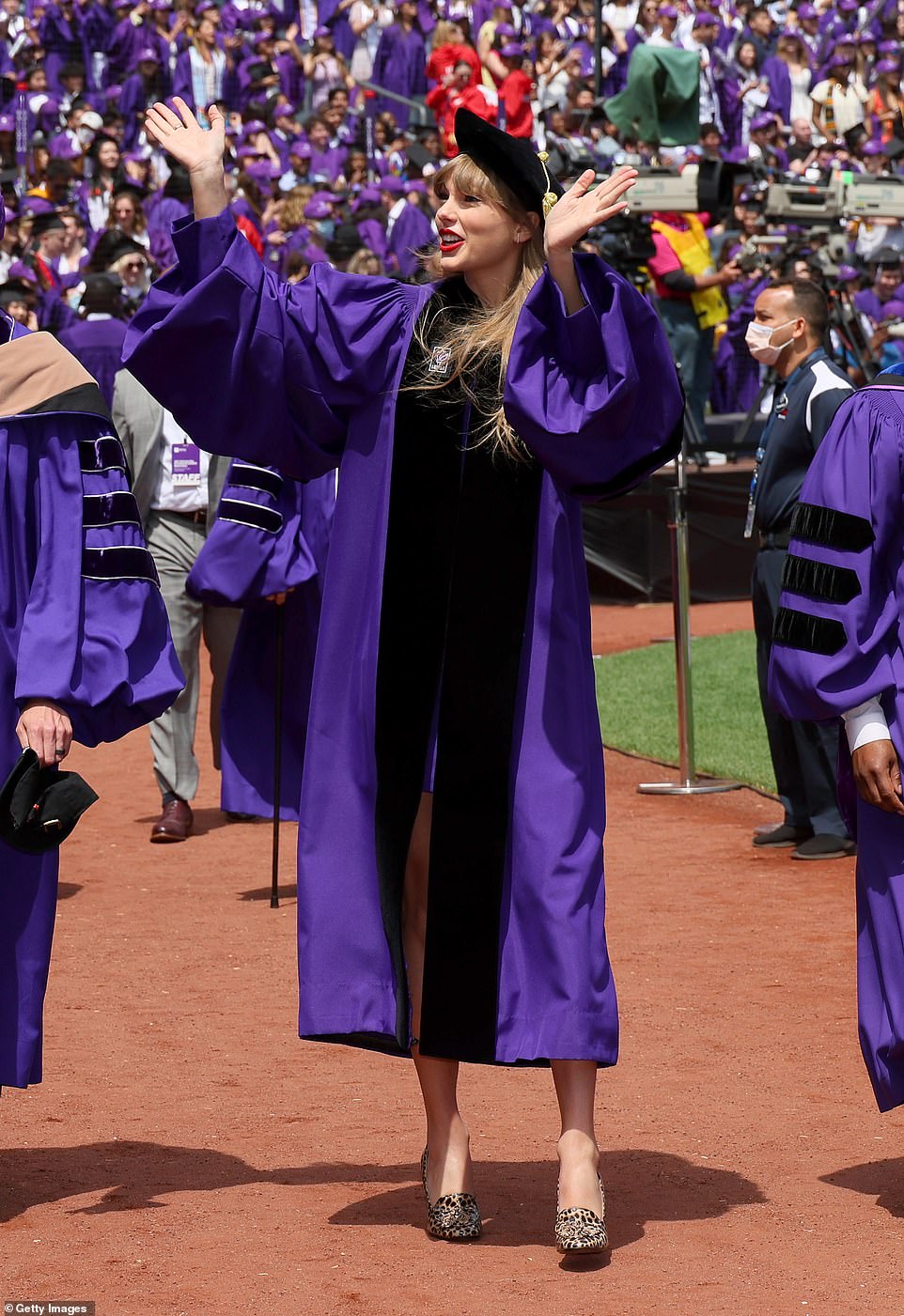 ‘Since 2019, we have been deprived of Commencement’s festive, communal joy, and its absence has been keenly felt.

‘Few groups of graduates are more deserving of a celebration than these classes: their pursuit of their studies disrupted, isolated by a daunting pandemic, these classes — 2022, 2021, and 2020 — have distinguished themselves with their grit, grace, and forbearance.

‘We reconvene at Yankee Stadium with a renewed sense of appreciation for the act of celebrating together in person, a recognition of our graduates’ enormous achievements, and a respect for their character and perseverance.’ 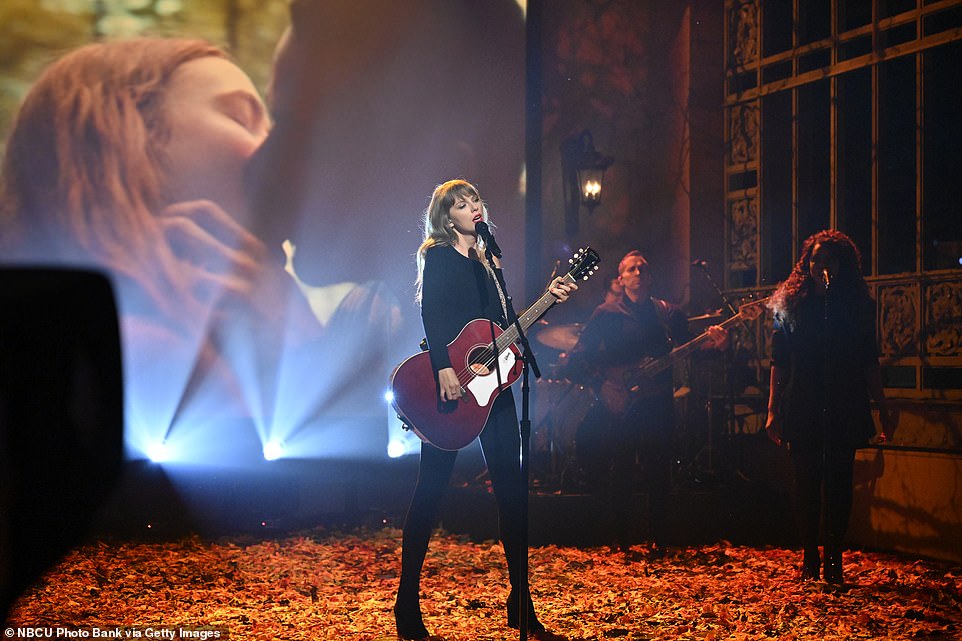 Laying low: Swift has been releasing much buzzed about re-recorded music; seen in 2021 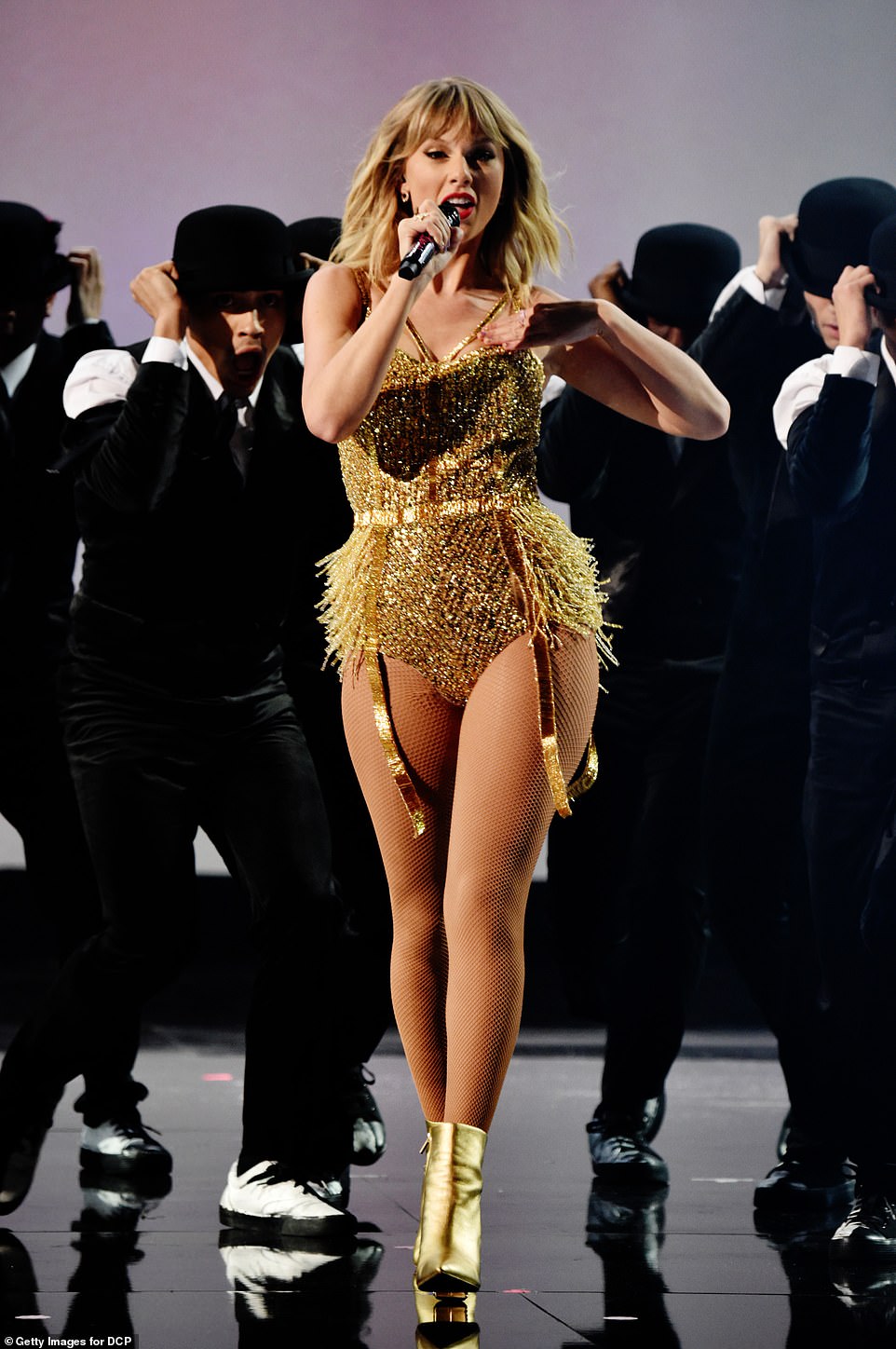 A golden girl: Swift seen in 2019 when she was performing at the AMAs in LA

Uriah Alexander Hall, essentially alluded to as Uriah Hall, is a Jamaican-American expert blended military craftsman contending in the...

To be or not to be forewarned is the question troubling dons teaching the classics of English literature to...
- Advertisement -

To be or not to be forewarned is the...
Entertainment

Mike Twist is well-known for being Harry Styles’ half-brother....
Business

A couple of months ago, our five-year-old son was...
Sport

Outdoor cooking boomed during the pandemic, and Weber, Traeger and the grilling industry think it will stay hot