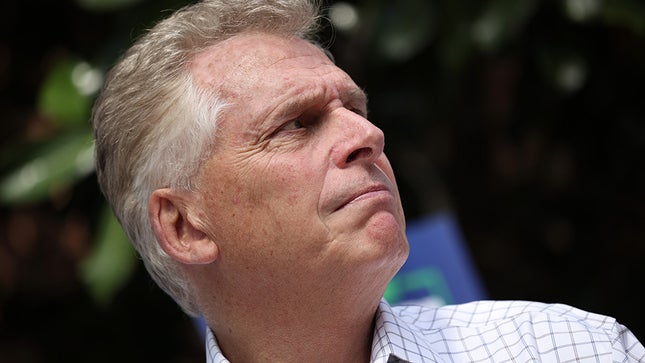 McAuliffe Forgot To Sign Form Making Him A Valid Candidate

The former Clinton moneyman allegedly forgot to sign his “statement of candidacy” form, potentially making him ineligible, according to a legal challenge filed Thursday by the Republican Party of Virginia.

Worse, the form includes two signatures from witnesses attesting that they saw him sign it — something that would seem to be impossible since he did not sign it.

The Republican Party of Virginia (RPV) today announced it has filed a legal action against the Virginia State Board of Elections (SBE) and the Virginia Department of Elections seeking declaratory and injunctive relief based upon the invalid Declaration of Candidacy filed by Democratic gubernatorial candidate Terry McAuliffe that would result in McAuliffe’s disqualification from appearing on any general election ballot.

The complaint contends that Terry McAuliffe, a politician of nearly 50 years, filed a Declaration of Candidacy with the SBE without his required signature in violation of Virginia Code § 24.2-520. However, the Declaration does include signatures from two individuals claiming that they witnessed McAuliffe sign the Declaration despite his signature appearing nowhere on the face of the document. As a result, McAuliffe’s Declaration should have been rejected by the SBE and Department of Elections.

“Free and fair elections are the cornerstone of our democracy, and Terry McAuliffe’s clear violation of the law severely jeopardizes the integrity of our elections in Virginia,” said Republican Party of Virginia Chairman Rich Anderson. “For decades, Terry has used his political connections and proximity to power to avoid consequences for his reckless behavior and disregard for people and laws, but no amount of political favors and back-slapping can refute the fact that McAuliffe is a fraudulent candidate and cannot be Virginia’s next governor.”

The Republican Party of Virginia is seeking declaratory relief that the Declaration of Candidacy must be declared legally insufficient and McAuliffe must be disqualified from appearing on any general election ballot in accordance with Virginia law. The RPV has further requested injunctive relief that stops the SBE from printing McAuliffe’s name on any ballots for the November 2021 general election.

Harry hits bar at $1,300-a-night NYC hotel for second night in a row but Meghan nowhere to be seen

Sabina Nessa ‘hit over head near her home’

Sabina Nessa ‘hit over head near her home’

Drew Scott Reveals What He Does Not Enjoy About Being Famous

Harry hits bar at $1,300-a-night NYC hotel for second night in a row but Meghan nowhere to be seen