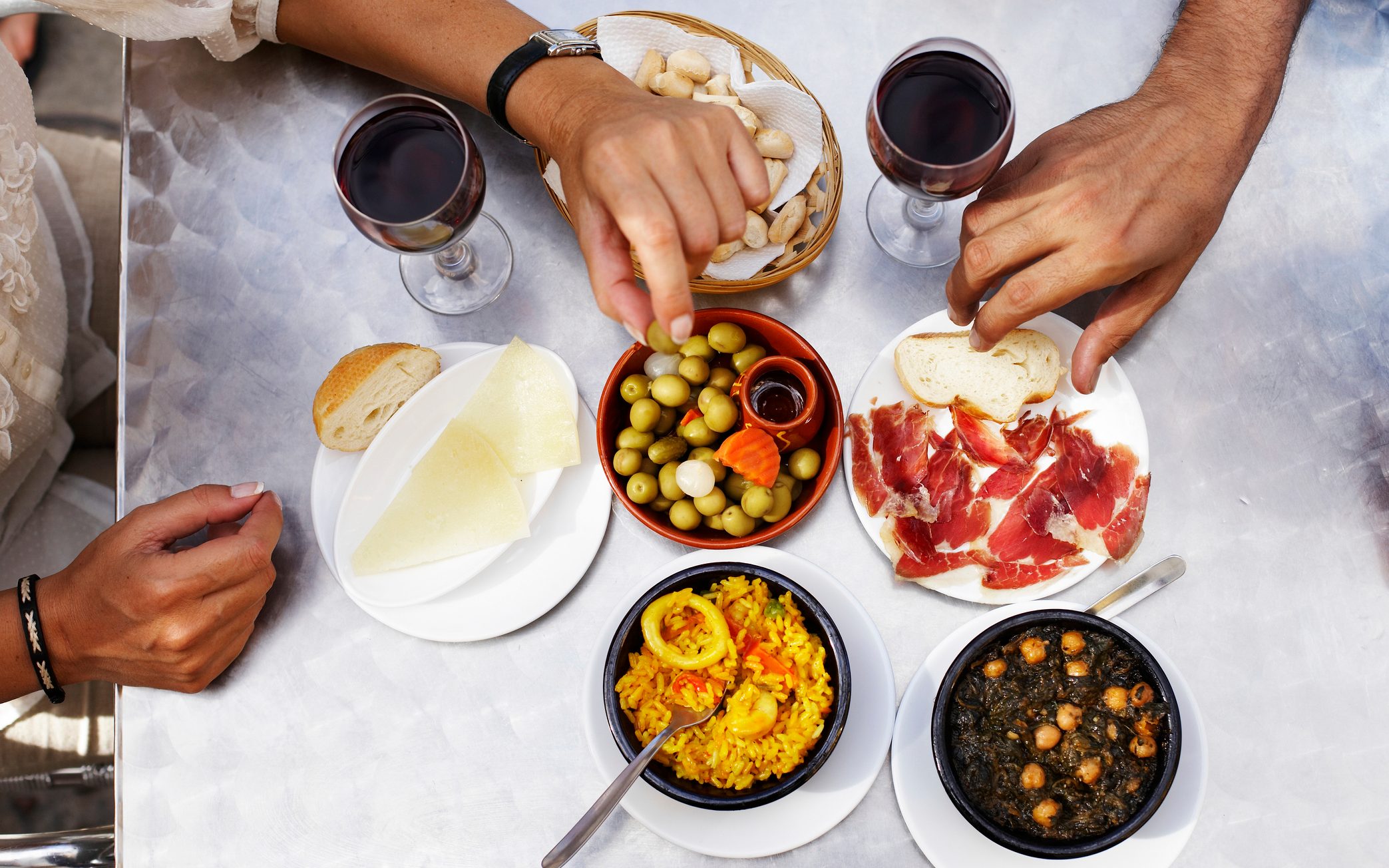 You could happily spend all day eating and drinking wherever you are in Spain, and I frequently do. One thing just sort of slides into the next – if you’re doing it right.

Be warned though, this means resetting your eating routine and having your lunch and dinner at least an hour or two later than you might be used to. This means lunch sometime after 2pm and dinner at 9pm at the very earliest, although after 10pm is much more the norm. But why do the Spanish eat so late?

When the sun is highest in the sky in Spain, it is not noon but 1.30pm. If you measure mealtimes according to the position of the sun, rather than what it is says on the clock, Spaniards are having their lunch at more or less the same times as the rest of Europe. Dinner, about seven hours later, matches their European counterparts too. So why are the clocks out of synch?

Well, until 1942, Spain was on Greenwich Mean Time, the same as the UK. But then General Franco, in his dubious wisdom, decided to put the country’s clocks forward an hour in line with Germany, Central European Time (CET), or GMT+1. After the end of Second World War however, Spain stayed on CET.

If you look at its geographic location, Spain is in the GMT zone. The Greenwich meridian passes through Castellón, on the east coast, so the vast majority of the country is west of it – as is Portugal, the Canary Islands and the UK, which are of course all on GMT. Galicia, in the northwestern corner of Spain, is so far west that really it should be in the next timezone, GMT-1.

Another factor influencing the late eating times is that in the years of poverty that followed the Spanish Civil War in the 1940s and 1950s, a lot of people had two jobs: one from early morning until two o’clock, and another from late afternoon until late evening, so they had to fit their meals in around their long working hours.

There is an increasing demand to get Spain back on GMT, but the shift in routine would require other changes too. The main news bulletins, for example, are at nine in the evening and popular programmes such as soaps and reality shows, don’t even start until about 10.15pm and go on until at least 11.30pm. Shops are open until at least 8pm and so are a lot of museums. Although some businesses, particularly multinational companies, now only give an hour or less for lunch, many others allow two hours or more and many people in all sorts of occupations then have to go back to work until 7pm at least.

Nevertheless, whatever their working hours or daily routines, the Spanish people can always find time to eat. Of course, they are not all eating all day, every day, but sometimes it certainly looks that way. Strangely, however, they are in general less rotund than we are in the UK. This has a lot to do with eating proper meals; having lunch at lunchtime and dinner at dinnertime is still very much entrenched in Spanish society, which means less snacking on the kinds of high-fat, nutrition-poor foods that pile on the pounds.

Wine at 11am? How to eat and drink like the Spanish

To get straight into the gastronomic swing in Spain, swerve breakfast at your hotel and head to a bar. The nearest will do, the first on the left is usually perfectly adequate – look for one with waiters dashing around and saucers lined up on the counter to speed up coffee delivery. Elbow your way to a stool and order a croissant or toast, either with butter and jam or olive oil and tomato. Or go for the full calorific combo of churros and chocolate. On a chilly morning, it is perfectly acceptable to order a carajillo – coffee with a slug of brandy.

After a little light sightseeing, it’s time to join the local population back in the bar for elevenses, perhaps a wedge of tortilla or a toasted sandwich. Although this happens all over the country, they take it particularly seriously in the Valencia region, where it is called esmorzaret and often takes the form of a massive baguette stuffed with some sort of gooey mix – morcilla sausage, egg and peppers perhaps. You could have more coffee but a beer or a glass of wine tends to go down rather well at this point.

An American columnist named Gene Park, Since October 2019, has functioned as a computer game reporter for The Washington...
- Advertisement -