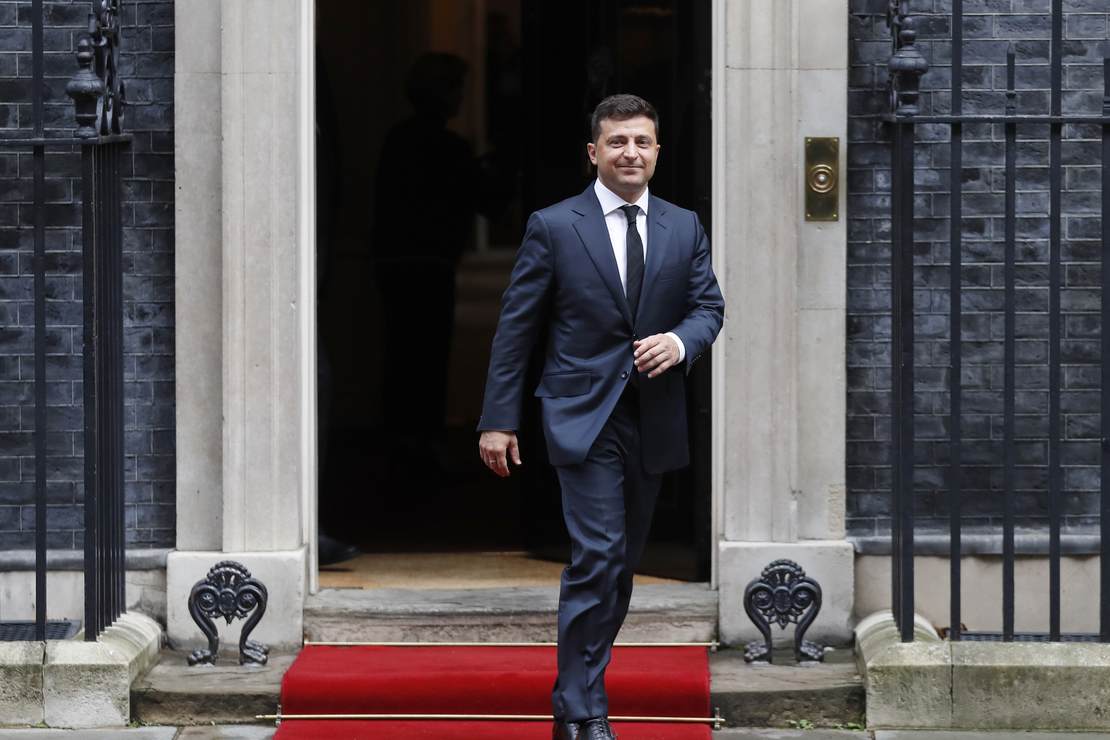 The Bush Center posted two tweets about the meeting.

“I was honored to spend a few minutes talking with President Zelenskyy – the Winston Churchill of our time – this morning. I thanked the President for his leadership, his example, and his commitment to liberty, and I saluted the courage of the Ukrainian people,” Bush said in a statement shared through his George W. Bush Presidential Center.

“President Zelenskyy assured me that they will not waver in their fight against Putin’s barbarism and thuggery. Americans are inspired by their fortitude and resilience. We will continue to stand with Ukrainians as they stand up for their freedom,” he added.

“President Zelenskyy assured me that they will not waver in their fight against Putin’s barbarism and thuggery. Americans are inspired by their fortitude and resilience. We will continue to stand with Ukrainians as they stand up for their freedom.” -President George W. Bush pic.twitter.com/x5PM8mW3zS

That comparison to Churchill has been made since the beginning of Putin’s war in Ukraine. Zelensky has not waivered from the beginning of Putin’s invasion. He could have taken Biden up on his offer to help him leave Ukraine but he told Biden to forget the ride, he needed ammunition. Zelensky’s show of courage and determination to protect his country and its citizens has been nothing short of inspirational. Ukrainians have taken his example to heart. They are fiercely loyal to their country and also determined to fight to keep Ukraine a free country. Zelensky has truly led by example so far. There is no indication that he will change course any time soon, if he does at all.

Zelensky is the leader we all hope to have when our country is threatened from the outside. George W. Bush was the president who led us through the terrorist attacks of 9/11/01. I still remember feeling grateful that Bush was the president that day instead of Al Gore. We can criticize many of Bush’s decisions about the war in Afghanistan and later in Iraq, but on that day and the days immediately after, there was no doubt that America would respond. Bush rose to the occasion and did what needed to be done.

Zelensky’s office provided some information about the virtual meeting.

“It is a great honor to meet you. I would like to thank the United States of America, the American people. I saw how people in the United States treat us on social networks, they take to the streets, support Ukraine with flags,” the President said.

The 43rd President of the United States expressed his support for Volodymyr Zelenskyy and all the Ukrainian people in the fight against the aggressor.

The President of Ukraine stressed that our state feels real help and sincere support from the United States.

“Americans are sincere, open-minded people, and I feel it. We have common values. I feel that it is from the heart,” the President said.

The 43rd President of the United States noted the resilience of Volodymyr Zelenskyy and the people of Ukraine in resisting the invaders.

“Your country has been invaded by forces that want to kill innocent people. And the fact that you stand firm inspires Americans,” said George W. Bush.

Zelensky noted Bush’s experience with an invading force. He invited Bush to come to Ukraine.

For his part, the President of Ukraine recalled the tragic events that took place in the United States on September 11, 2001. He noted that at that time many Ukrainians sympathized with the American people and shared the pain of relatives and friends of the victims of the terrorist act.

“Our conversation is important to me because you are an example of a strong leader,” said Volodymyr Zelenskyy.

It’s hard to not be reminded that Bush hosted Putin at his ranch in Crawford, Texas while in the first year of his administration, in 2001. Putin was on a charm offensive and Bush famously said he looked into Putin’s eyes and saw his soul. That whole thing looks pretty foolish in hindsight. However, at the time, there was some hope that Putin might garner some kind of working relationship with the United States. Later, John McCain quipped that he, too, looked into Putin’s eyes and saw the letters KGB. That observation proved to be much more realistic.

Bush has been wading back into political campaigns lately. It’s been announced that he’ll host a $5,000-a-head fundraiser for Georgia Governor Brian Kemp at the Texas home of a prominent real estate developer. Guests who pay $15,200 will be special VIPs and attend a reception with Kemp and Bush. Bush has also contributed to the campaigns of Sen. Lisa Murkowski (R- Alaska) and Rep. Liz Cheney (R-Wyoming). It’s no coincidence that Bush is jumping back into politics to defend anti-Trump candidates and to raise money for Kemp, a candidate on Trump’s naughty list. Bush is sideways with many Republican voters because he publicly came out as a NeverTrumper and didn’t vote for Trump in 2016 or 2020. Granted, Jeb! ran for the 2016 Republican presidential nomination. Nonetheless, the Bush family always preached GOP loyalty to voters so the irony of the lack of loyalty from GWB, and his parents, was quickly noted, especially among Texas Republican voters. Just sayin’.

Zelensky deserves all the kudos he receives. The world needs more of his kind of courage. Biden chose to lead from behind, as the Obama administration did, and is only now trying to play catch-up on sending support to Ukraine.

An outbreak of monkeypox in the UK could have...
Celeb Zone

Who is Liz Cho? Elizabeth ‘Liz’ Cho was born on...
Business

The movie stresses the horrifying nature of his teeth....

“Real Time” host Bill Maher has been a fan...
- Advertisement -