: These billionaire philanthropists spoke out against overturning Roe v. Wade — but that support doesn’t always translate to funding 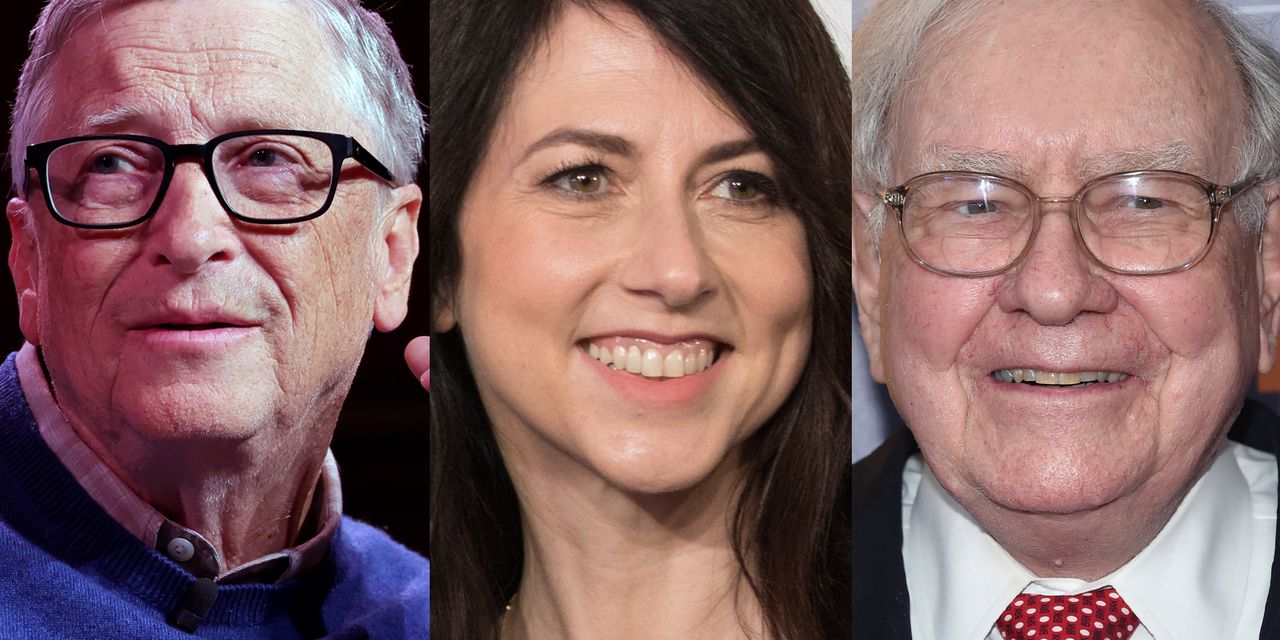 Some billionaire philanthropists spoke out publicly against the potential reversal of Roe v. Wade this week, but their support for abortion access doesn’t always include funding it.

Both Microsoft MSFT, -0.94% co-founder Bill Gates and his ex-wife, Melinda French Gates, posted statements after a leak indicated the U.S. Supreme Court seems poised to strike down the landmark abortion-rights decision. Bill Gates said ending legalized abortion would set the U.S. back 50 years; Melinda French Gates said, “Every woman should have the right to decide whether and when to have children.”

But the Bill and Melinda Gates Foundation, a longtime provider of access to contraceptives worldwide, doesn’t directly fund abortions, a spokesperson told MarketWatch.

Melinda French Gates once said the foundation couldn’t support abortion because the issue was a political “hot potato” that could interfere with its long-term goals. “We’ve got to be realistic and practical. We’re hoping to be doing this for 30, 40 years,” French Gates told the U.K.’s Sunday Times in 2010. “We need to be able to work with any [U.S.] administration that comes into office, so we can’t get into the controversy.”

But some of the Gateses’ elite philanthropist peers have been front and center in putting money toward abortion access. MacKenzie Scott, the former wife of Amazon AMZN, -1.40% founder Jeff Bezos, donated $275 million earlier this year to Planned Parenthood’s national office and 21 of its state affiliates. It was the largest single gift in the organization’s history.

Michael Bloomberg, one of the country’s most prolific philanthropists, has donated $50 million over the years “to support reproductive rights in the U.S., including recent donations of $14 million to the Planned Parenthood Action Fund, the Center for Reproductive Rights, and the Collaborative for Gender + Reproductive Equity,” he noted in an op-ed earlier this year. One of his first acts as mayor of New York City was requiring public hospitals “to teach all OB-GYN residents reproductive care, including how to safely perform abortions,” he added.

Bloomberg tweeted this week that reversing Roe would be “a mistake of historic proportions.”

The single largest private contributor to abortion access, by some measures, is one who keeps his funding activities mostly under the radar. That would be the Gateses’ longtime friend and philanthropic partner, Warren Buffett, the chairman and chief executive of Berkshire Hathaway BRK.A, -0.39% and a former trustee of the Bill and Melinda Gates Foundation.

Buffett has been a significant financial supporter of abortion access and reproductive rights for the past few decades. The Susan Thompson Buffett Foundation — named after Buffett’s late wife and funded by Berkshire Hathaway shares — has handed out roughly $500 million to $700 million annually in recent years, but rarely publicizes its grants in press releases. Its website describes funding college scholarships for Nebraska students, but nothing else, and states that the foundation will not respond to inquiries about anything other than scholarships.

But between 2015 and 2019, the Susan Thompson Buffett Foundation was the largest single funder of reproductive rights, including abortion access, and the largest single funder of abortion funds, according to a National Committee for Responsive Philanthropy analysis of data from Candid, an organization that tracks nonprofits and foundations. (Abortion funds are groups that help people pay for abortions and related costs including travel, overnight accommodations and child care.)

In the 1990s, the foundation helped pay for research to develop the abortion pill RU-486, an effort that the director of the National Abortion Rights Action League’s New York chapter described then as “heroic,” according to press reports at the time.

Buffett’s late wife was reportedly moved to fund abortion access and family-planning initiatives after she saw poor living conditions in the developing world, especially among women, according to a 1995 Globe and Mail story on the couple’s giving. Buffett’s own commitment to abortion funding reportedly stemmed from an interest in population control. “Warren conceptualized in macroeconomic terms,” the Globe and Mail reported. “He had a Malthusian dread that overpopulation would aggravate problems in all other areas-such as food, housing, even human survival.”

The Susan Thompson Buffett Foundation and Berkshire Hathaway did not respond to requests for comment.

One of the top philanthropies behind restricting abortion access is the National Christian Foundation, which donated more than $17 million to “right to life” groups between 2006 and 2020, according to the National Committee for Responsive Philanthropy.

During that period, the National Christian Foundation was the biggest donor in Candid’s “right to life” category, which includes groups “working to pass legislation or other social measures which seeks to assign legal rights to an unborn human being and seeks to criminalize the termination of unwanted pregnancies.” (The category is just one part of the anti-abortion sector; it doesn’t include entities such as crisis pregnancy centers that seek to convince people not to have abortions.)

NCF is a nonprofit charity that sponsors donor-advised funds, meaning that donors contribute money, then recommend which organizations should receive their donations, a spokesman told MarketWatch. Founded in 1982, NCF has distributed more than $14.5 billion in grants to charities “who are providing clean water to the thirsty, rescuing victims of human trafficking, translating the Bible into new languages, and much more,” spokesman Steve Chapman said.

The founders of the National Christian Foundation include Ron Blue, founder of the faith-based wealth management firm Ronald Blue & Co., which had $7 billion in assets under management when it was sold to Thrivent Trust in 2017, and the late Larry Burkett, founder of the “Christ-centered and Bible-based” financial services nonprofit Crown Financial Ministries.

Melinda French Gates has critics on both sides of abortion debate

The foundation was a supporter of contraception and population control in its earliest days, and anti-abortion groups visited Microsoft headquarters in 1999 in protest of Gates Foundation grants to the International Planned Parenthood Federation, the Seattle Post-Intelligencer reported then. A Gates Foundation spokesman said at the time that the foundation funded women’s reproductive health programs, but, “We have never made a grant for abortion services.” It was one of the first of many public statements the foundation has made explaining that it doesn’t pay for abortions.

In subsequent years the foundation shifted its focus to curing diseases and developing vaccines, but in 2012 Melinda French Gates announced a “new crusade” and set a goal of getting 120 million women access to birth control by 2020. She said then that the effort was not about “coercive population control nor abortion.” The initiative made Melinda French Gates, a practicing Catholic, the target of criticism from church leaders who said she was betraying her faith.

In one interview, she responded to questions about Catholicism’s anti-birth control stance by saying that supporting family planning was in line with the Catholic Church’s commitment to social justice. “I believe in not letting women die,” Gates said at the time. The foundation estimated then that its mission to provide birth control to 120 million women could prevent 50 million abortions, the Vancouver Sun reported.

But letting women die is precisely what some health officials have accused the Gates Foundation of doing by not funding abortion. In 2010, the editor of The Lancet medical journal said it was “outrageous” that the Gates Foundation didn’t use its resources to provide safe and secure abortions, given that roughly 68,000 women a year were dying then from mishandled abortions, the Sunday Times reported.

In 2014, Melinda French Gates explained again that controversy around abortion, in her view, was “threatening to get in the way of the lifesaving consensus regarding basic family planning.” The Gates Foundation had decided not to fund abortions, she said, and she “had decided not to engage publicly on it.”

Her relative silence, and the silence of the Gates Foundation, an agenda-setting global health leader, rankled some critics who said powerful institutions should emphasize the role of safe abortion access in women’s health.

It remains to be seen whether Melinda French Gates could change her stance as she focuses more on her own philanthropy in the wake of her split from Bill Gates. Her company, Pivotal Ventures, did not respond to a request for comment.

As for the Gates Foundation, where Melinda French Gates remains a trustee, a spokesperson said, “We believe that achieving a more gender-equal world starts with ensuring that women and girls have autonomy over their health, bodies and future. Every woman should have the right to decide whether and when to have children. Our focus is on ensuring women’s health and access to family planning. We don’t fund abortion directly.”

They added, “We support a broad-based coalition of partners that supports women’s needs throughout their lives — from good nutrition at every stage of life, access to family planning and reproductive health services beginning in adolescence, or prenatal and antenatal care when having children.”

Rachel Brosnahan walked and talked with her co-star Reid...

Lennon Gallagher and his sister Molly Moorish looked on...
- Advertisement -

Courtney McBroom is a famous chef whose main area of interest is cooking pastry. She is also well-known for...
- Advertisement -

Rachel Brosnahan walked and talked with her co-star Reid...
TV

A man, Kyle Dallape has shared how...
- Advertisement -