A teenage car thief has been jailed for two years after he led officers on a high speed chase in a stolen Mercedes, driving up to 120 miles-per-hour, which was captured on dash cam.

Tyrone Worsley, 18, of Tonge Moor, Bolton, spent ten minutes attempted to lose a patrol car which was tailing him.

Footage of the chase showed Worsley jumping red lights, travelling on the wrong side of the road and narrowly avoiding a woman pushing a pram before abandoning the car at a Tesco supermarket.

Worsley’s conduct was described as an ‘utterly disgraceful piece of driving’ by Judge Tom Gilbart who jailed Worsley for two years and two months. He was also banned from driving for four years.

Bolton Crown Court heard officers chased Gilbart through the Farnworth area of Greater Manchester, where he drove the wrong way around a major roundabout, and forced other cars to pull over.

At one stage he narrowly avoided hitting a cyclist, while the police car trailing him was forced to slow down on several occasions because of the risk to other road users.

The footage showed how Worsley tried to weave through back streets and alleys in an effort to evade capture.

He even blasts through a police roadblock where officers had deployed a stinger to shred his tyres and bring the car to a halt.

He abandoned the car at the Tesco Extra in Walkden before fleeing on foot. He was arrested by police a short time later.

He was also convicted of stealing a Ford Mondeo from Horwich on September 12.

He then threatened to petrol bomb a man’s house and slit his wife’s throat after he had stolen his victim’s motorbike.

The court heard Worsley was contacted by the victim after the criminal attempted to sell the bike online. 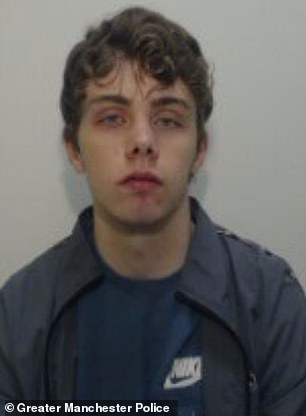 Tyrone Worsley, 18, pictured, was jailed for two years and two months after pleading guilty to a string of offences including driving dangerously and driving without insurance

Worsley’s defence Nicholas Ross told the court his client had a difficult upbringing and was ‘very sorry’.

According to the Manchester Evening News, the teenager, who had 19 prior convictions for 56 offences, pleaded guilty to stealing the car, malicious communication, handling stolen goods, driving dangerously and driving while disqualified. He was also convicted of driving without insurance.

Judge Gilbart said: ‘[The video] is quite shocking to watch.

‘During that pursuit you drove at grossly excessive speeds and you put pedestrians and other road users in danger.

‘This was an utterly disgraceful piece of driving.

‘It was a selfish piece of stupidity done without a thought for others.

‘It is a remarkable piece of good fortune that nobody was injured or killed.’

Commenting after the case, Inspector Shilvock of Greater Manchester Police said: ‘What could’ve been a dangerous incident was managed superbly by our officers without comprising the safety of the public.

‘We’re continuing to take the fight back to criminals and I hope the public recognise the extents we’re trained and prepared to go to.’

Who is Ashley Alvano? Social media platforms have never been more popular than today; many people have used social media...

The Tipperary local people delivered a preventative story throughout two webcast episodes, itemizing the points of interest of a...
- Advertisement -

Who is Sheryl Berkoff? Sheryl Lynn Berkoff was born on...

Alexis Bledel is stepping away from the hit Hulu...
Celeb Zone

For years. fans of the Megami Tensei series...
- Advertisement -