A woman with a crutch beside her and her leg in a boot can be seen in the video sitting on a bench overlooking the Harlem Meer when the mugger strikes.

Clad in a purple hooded sweatshirt and blue Yankees cap, he makes a move for the 40-year-old woman’s iPhone.

She tries to fight him off while hopping on one foot, but he punches her in the face with enough force to knock her hat to the ground, and he begins to run off with the phone.

A woman walking her dog is then seen sticking her leg out to trip him as he runs past, but is unsuccessful.

Not captured on camera, however, was the witness, police say, who confronted the mugger and retrieved the phone for the woman. 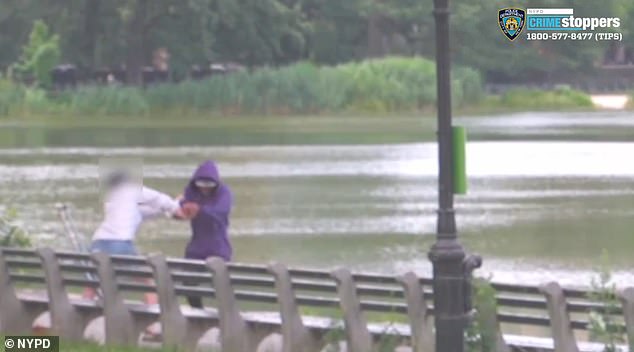 The woman was sitting on a bench overlooking the Harlem Meer with a crutch beside her, police said when the mugger approached her and went to grab her phone

Police had no further details on the good Samaritan, but the mugger was able to get away, and police are looking for information that could lead to his arrest.

He is described as in his mid 40s, around 5-foot-5, weighing between 140 and 150 pounds with a thin build, light complexion and light gray facial hair. 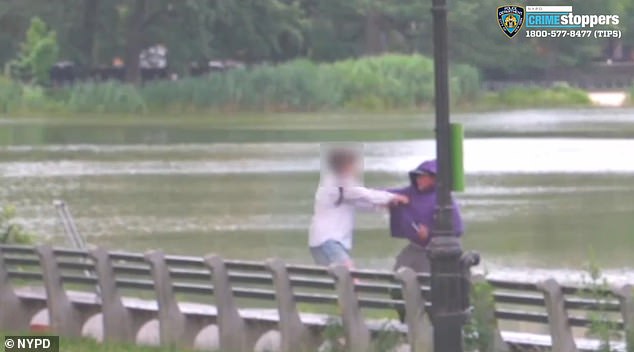 The two struggled, and he can be seen punching the woman in the face before running off with the phone 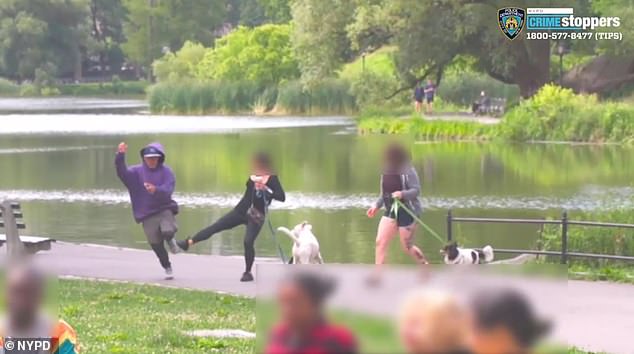 A woman walking her dog attempts to trip the mugger as he makes his escape. While she is unsuccessful, police said another bystander off-camera was able to confront the mugger and retrieve the phone for the woman

Police ask that anyone with information on the mugger reach out to the NYPD’s Crime Stoppers Hotline at 1 (800) 577-8477.

The daylight mugging comes as violent crimes have increased in the city from the same time last year.

Robberies, which include muggings, were up nearly 40 percent over the past month, with 1,086 recorded compared to 782 in 2020, according to NYPD crime data. 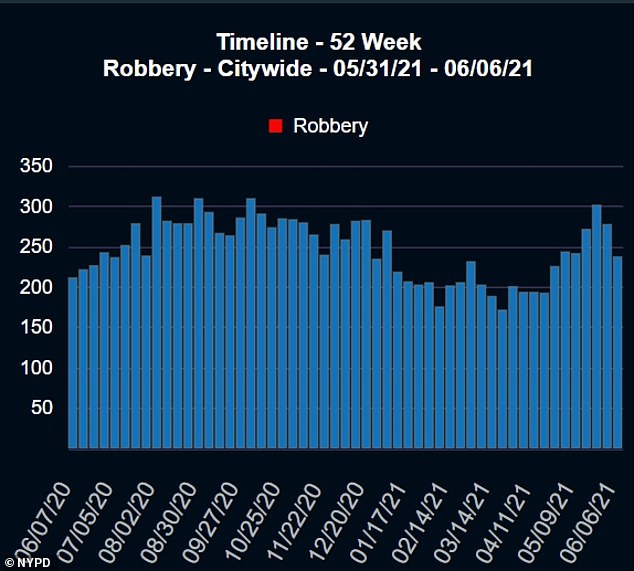 Crimes such as robberies have seen a spike in recent months, and have been up compared to the same period last year

Murders, however, are down 34 percent, with 31 recorded in the past month compared to 47 during the same time last year.

A man wearing full body armor fatally shot four people, including a mother and the 3-month-old baby she was cradling, and engaged in a massive gunfight with police and deputies before he was wounded and surrendered, a Florida sheriff said Sunday. An 11-year-old girl who was shot seven times survived. Polk County Sheriff Grady Judd…

A ‘drink-driver’ led cops on a 100mph chase for 13 miles with four children in his truck before finally parking up and getting out with a baby in his arms. According to Lieutenant Kenneth Benoit, spokesman for the Harris County Sheriff’s Office, authorities saw the white Ford pick-up truck around 1.30am yesterday morning. They pursued…

Sir Keir Starmer will echo New Labour in pledging to be ‘tough on crime, tough on the causes of crime’ today, with a plan to tackle antisocial behaviour. His home affairs spokesman will promise more bobbies on the beat to boost the ‘eyes, ears and boots on the ground’ and a major recruitment drive for…

It’s been obvious for a long time that Democrats no longer believe in due process, particularly when it comes to sexual harassment claims. Believe all women! But there’s something bone chilling about hearing one of their most prominent figures say it as plainly as Catherine Lhamon did Tuesday at her confirmation hearing. Lhamon is President…

A notorious kingpin once known as one of the most dangerous men in Britain has died in hospital while being treated for Covid. Jason Coghlan, 51, had turned his back on crime after spending years in maximum security for armed robbery. The self-confessed villain – a close associate of slain Salford ‘Mr Big’ Paul Massey…

Who is Winston Salem,’s high school shooter? Gunfire erupts on campus, 1 student shot A high school was closed after a shooting broke out on campus on Wednesday, September 1. Police confirmed that there was a “shooting on school property” adding that they are doing everything possible to keep the children safe. The reports further…