A Brisbane cafe owner has been dramatically arrested by three officers behind the counter of his own store, and police have clashed with diners trying to block their entry to a Toowoomba restaurant in two weekend incidents captured on video.

Pierre Coorey, the owner of The Vintage Apron cafe in Capalaba Shopping Centre in Brisbane was physically detained and handcuffed behind the counter of his shop on Sunday and charged with offences arising from allegedly not asking customers to show their vaccination status.

The video showed the 53-year-old being manhandled and arguing with police as customers who were filming the incident asked police what he had done wrong.

In another incident at Bar Wunder in Toowoomba on Saturday, a group of activists blocked police from entering the premises and shouted at attending officers.

One protester told an officer he looked ‘like a f***ing smurf’, and the policeman calmly replied: ‘That’s nice’.

Customers inside the bar and restaurant chanted ‘get out’ and ‘trespassers leave’ as others prevented police officers from entering the premises.

Both incidents were filmed by many people and posted online by groups opposing vaccine mandates. 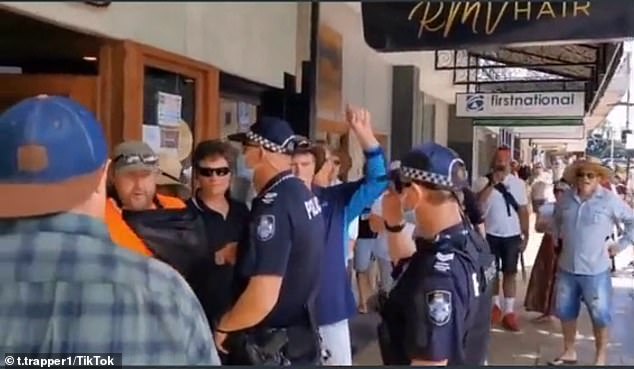 On January 2 Bar Wunder owners were issued with a direction to close the entire premises, with the direction in place until January 31.

In the video an officer identifies himself by his name and tries to get into the bar, but is stopped by a group of unmasked people shouting at him.

One man keeps repeating the phrase ‘Trespassing, leave’ at the officers. Then, from inside the bar, a chant of ‘Get out’ starts.

When an officer tries again to get into the bar and seeks to move a man aside, a male voice can be heard saying ‘Don’t push him. Don’t assault him.’

Another voice asks a policeman ‘Don’t you feel embarrassed doing this mate?’ and then reels off a list on conspiracy theory misinformation and swears at the officer.

‘You’re getting bacterial pneumonia wearing those masks. Hypoxia, which is lack of oxygen,’ the man says. 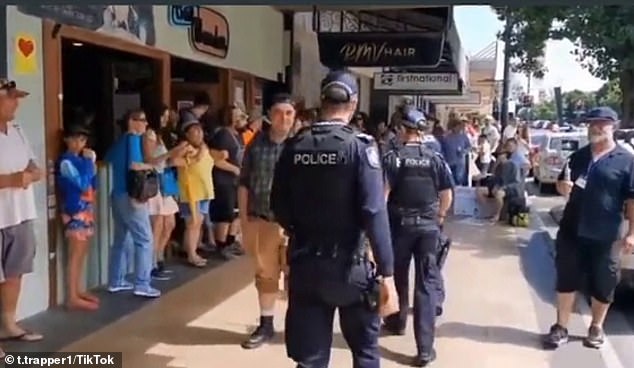 After the smurf comment, and the officer’s retort of ‘that’s nice’, the protesting man  then says ‘Nice doesn’t cut it. I don’t think you’re very nice standing here hassling a business owner trying to support his family.

He then starts singing ‘Disgraceful. Dishonourable.’

Queensland Police said there had been ‘multiple breaches of the Chief Health Officer’s directions’ by the bar. 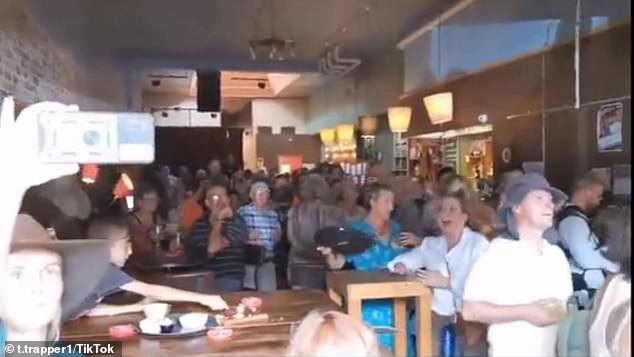 ‘On January 15 at 2.10pm the licensed premises was allegedly opened with approximately 50-60 patrons inside consuming alcohol for a number of hours.

‘Police attended the address twice and were blocked by a large crowd who prevented entry to the premises,’ the Police spokesman said.

That night the police went to a Toowoomba residence and arrested a 56-year-old man and 50-year-old woman.

The man was charged with one count of failing to comply with a Covid-19 direction and he will face Toowoomba Magistrates Court on January 25.

The woman was charged with two counts of the same offence and will appear on March 16.

‘The overwhelming majority of the Toowoomba community has been very compliant with public health directions throughout the Covid-19 pandemic, and we urge members of the public to continue to work with us in the interests of keeping our community safe,’ the police said.

In the southern Brisbane suburb of Capalaba on Sunday, The Vintage Apron owner was handcuffed and led away by police.

In a video posted to social media, the man resisted the police officer’s attempts to arrest him and two more officers step in to help.

The man is handcuffed and dragged away as he complains that his arm is being hurt and says ‘Don’t hurt me.’

Many customers are seen filming the scene on their mobile phones, while a woman’s voice says ‘This is not right.’ 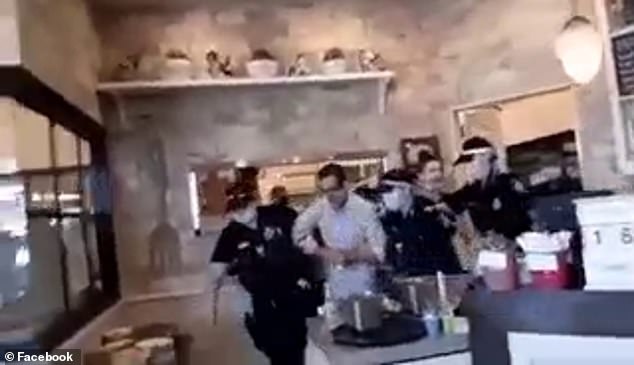 ‘Police have received more than 20 complaints from members of the public about the cafe breaching public health requirements and have previously attended the business in relation to compliance issues,’ a spokesman said.

The man was charged with contravening a police direction, failing to comply with the Covid-19 public health directions and obstructing police. 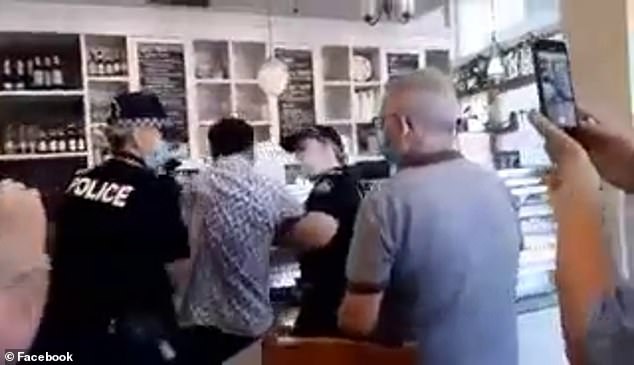 He was taken to Cleveland Watchhouse before being released on bail to appear in the Cleveland Magistrates Court on March 15.

There was a small protest at the Capalaba Police station on Sunday afternoon. No arrests occurred at this event.

Kanye West’s 2020 presidential campaign committee claims they were defrauded out of thousands of dollars, according to a new...

Dame Esther Rantzen has called on ministers to stop elderly people being forced to pay to park their cars...
- Advertisement -

The divine-themed Incantations are one of two spellcasting...
Celeb Zone

Dame Esther Rantzen has called on ministers to stop...
Celebrity

In his discussion of Ron DeSantis on the Time...
Celeb Zone

The shooting took place at Robb Elementary School in...
News

A city council in Kansas has voted to walk...
Business