Women, children and the elderly are FINALLY evacuated from Mariupol steel plant

All women, children and elderly civilians were today evacuated from the steel plant in the destroyed port city of Mariupol, Ukraine’s deputy prime minister said.

Iryna Vereshchuk said in a statement on social media that ‘this part of the Mariupol humanitarian mission has been completed’, as forces continue to hold out against Russian troops.

The Azovstal steel mill is the last pocket of Ukrainian resistance in the devastated port city and its fate has taken on a symbolic value in the broader battle since Russia‘s invasion.

Vereshchuk said that 50 people had been evacuated from the sprawling steelworks.

The Russian defence ministry said that 11 among them were children, removed as part of a mission coordinated with the UN and Red Cross.

The last estimates suggested that about 200 civilians were still trapped in the Soviet-era tunnels and bunkers beneath the sprawling Azovstal factory, along with a group of Ukrainian soldiers making their last stand. 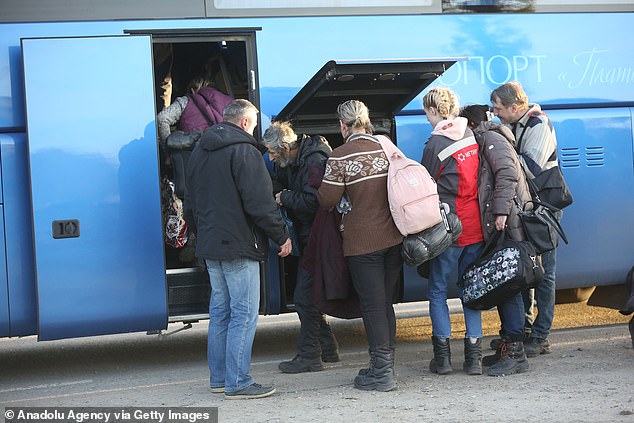 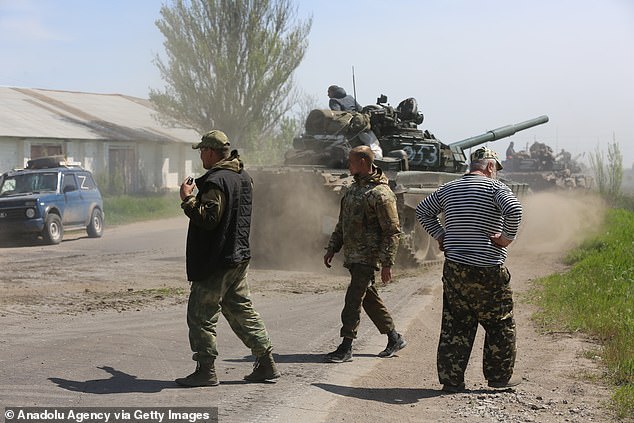 A tank of the DPR army moves on the road during several dozen Ukrainian civilians, who had been living in the bomb shelters of the Azovstal plant for more than a month, being evacuated in Mariupol 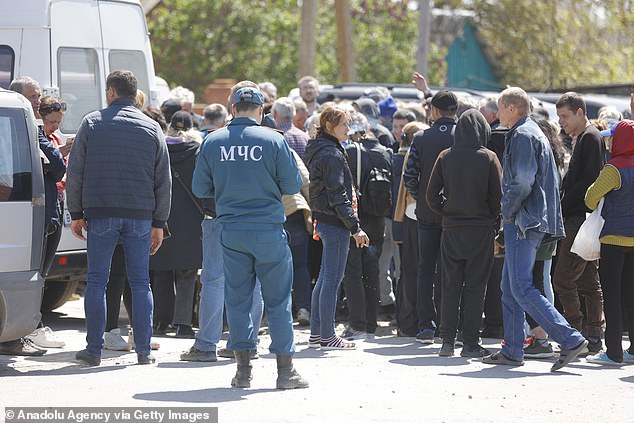 On Saturday, six Russian cruise missiles fired from aircraft hit the region of Odesa, where authorities have a curfew in place until Tuesday morning. Videos posted on social media showed thick black smoke rising over Odesa with sirens wailing in the background.

Satellite photos analyzed by The Associated Press showed Ukraine targeting Russian-held Snake Island in a bid to impede Russia’s efforts to control the Black Sea. A satellite image taken early Saturday by Planet Labs PBC showed what appeared to be a Serna-class landing craft against the island’s northern beach.

The image corresponds with a Ukrainian military video showing a drone striking the Russian vessel, engulfing it in flames.

Snake Island, located some 35 kilometers (20 miles) off the coast, figured in a memorable incident early in the war when Ukrainian border guards stationed there defied Russian orders to surrender, purportedly using colorful language.

Against that backdrop, Ukrainian fighters made a final stand to prevent a complete takeover of Mariupol.

Securing the strategically important Sea of Azov port would give Moscow a land bridge to the Crimea Peninsula, which Russia annexed from Ukraine during a 2014 invasion.

New satellite photos analyzed by the AP showed vast devastation at a sprawling seaside steel mill that is the last corner of Ukrainian resistance in the city.

Buildings at the Azovstal plant, including one under which hundreds of fighters and civilians are likely hiding, had large, gaping holes in the roof, according to the images shot Friday by Planet Labs PBC.

The bombardment of the steel mill intensified in recent days despite a Russian pledge for a temporary cease-fire to allow civilians inside to escape.

Rescuers sought to evacuate more civilians on Saturday after a week of on-and-off convoys to get people out of Mariupol. Dozens of civilians were delivered Friday to the care of United Nations and International Committee of the Red Cross representatives, Russian and Ukrainian officials confirmed.

The latest evacuees followed roughly 500 others who were allowed to leave the plant and other parts of the city in recent days. 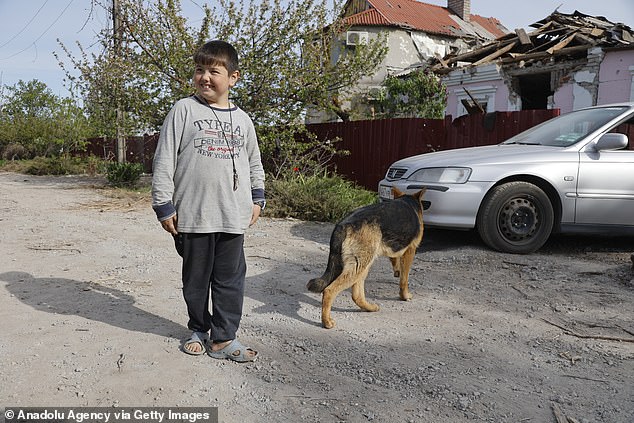 A child and his dog are seen in front of the damaged building during several dozen Ukrainian civilians, who had been living in the bomb shelters of the Azovstal plant for more than a month, being evacuated in Mariupol 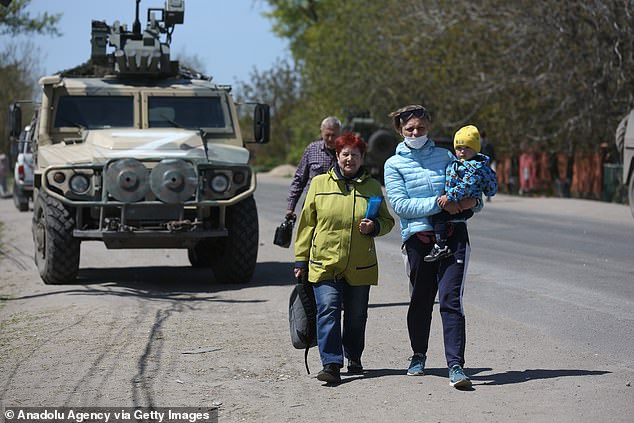 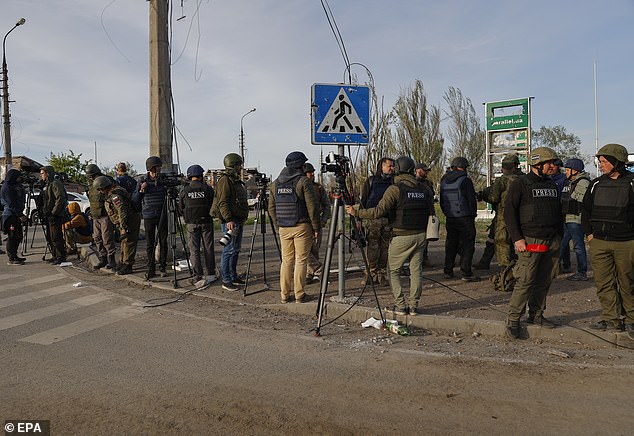 Journalists wait for the evacuation of the civilian people from Azovstal in Mariupol, Ukraine

Ukrainian fighters at the Azovstal mill have repeatedly refused to surrender but acknowledged Saturday using white flags to help evacuate civilians from the site.

The fighters issued a statement via social media saying both they and the Russians have used a white flag system to halt fighting in order to get civilians out.

They said the Saturday incident marked the fourth time they raised the flags for that purpose.

The statement followed comments attributed to a commander on the Russian side there suggesting the Ukrainians were using the white flag for negotiations with their attackers.

The Ukrainian government has called on international organizations to also help evacuate the fighters defending the plant.

By Russia’s most recent estimate, roughly 2,000 Ukrainian fighters remained at the Azovstal steelworks. They have repeatedly refused to surrender.

Ukrainian President Volodymyr Zelenskyy said ‘influential states’ were involved in efforts to rescue the soldiers, although he did not mention any by name.

‘We are also working on diplomatic options to save our troops who are still at Azovstal,’ he said in his nightly video address early Saturday.

The relief of those who have been evacuated was tempered by the memory of those still left behind.

‘They need our help badly,’ said Serhii Kuzmenko, 31, who fled with his wife, 8-year-old daughter and four others from their bunker, leaving behind another 30. ‘We need to get them out.’

While they pounded away at the plant, Russian forces struggled to make significant gains elsewhere nearly two and a half months into a ruinous war that has killed thousands of people, forced millions to flee Ukraine and flattened large swaths of some cities.

Stacey Baca Is Leaving ABC7 But Where She Is Going Next? Age & Wikipedia Details Nathaniel David Rowland...

Helen Sadler is an extremely famous British-born-American entertainer and voice craftsman, she is notable for her presentation as Rey...
- Advertisement -

Even in rural Texas, RINOs roam. But they don’t roam free, as State Representative Glenn Rogers is finding out....

A mother has warned of the dangers of using sunbeds without safety goggles after she nearly went blind due...

British and European Union universities and academics have collaborated...
Business

A 28-year-old progressive activist is hoping to defeat a...
Sport

Melanee Raney is an Anchorage, Alaska-based ski guide and...
Celebrity

The Celebrity Apprentice NZ is a New Zealand unscripted...
- Advertisement -