The Senate passed an anti-discrimination bill to address the rise in hate crimes against Asians in the U.S. by wide, bipartisan margins Thursday afternoon.

Ninety-four senators voted for the measure, while there was only one no vote, from Missouri Republican Sen. Josh Hawley – who became nationally known earlier this year for his role in challenging Electoral College vote counts on the day of the MAGA riot.

More than just a statement against anti-Asian hate, the bill directs the Departments of Justice and Health and Human Services to issue new guidance on the rise in violence against Asians amid the coronavirus pandemic. 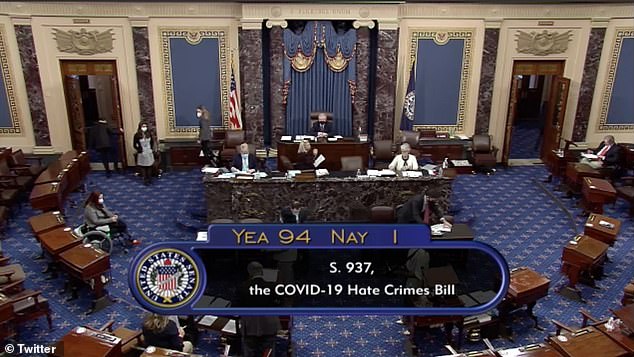 The Senate overwhelmingly voted Thursday on a bill to combat the rise in hate crimes against Asians, which has occurred during the coronavirus pandemic 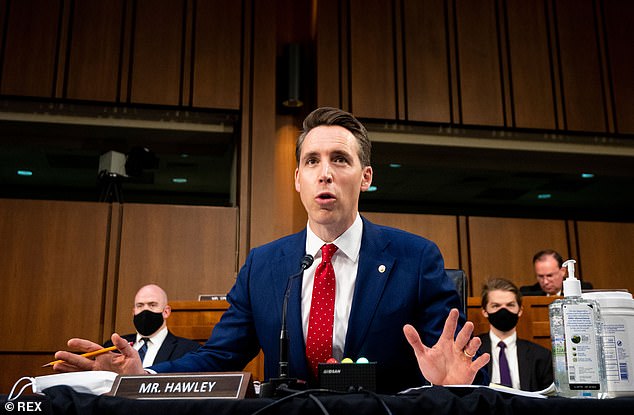 Sen. Josh Hawley was the only no vote on the bill. Hawley became a national political figure for his role in challenging Electoral College vote counts on the day of the MAGA riot on January 6

The bill expedites the DOJ’s review of anti-Asian hate crimes.

It also assigns an official to be in charge of the task.

It now heads to the Democrat-led House, where it’s also expected to pass.

The Senate’s vote is the latest move the federal government has made to reverse what President Joe Biden considers to be the misdeeds of the last administration, placing some blame on former President Donald Trump for labeling COVID-19 the ‘China virus’ and ‘Kung flu.’

‘It’s the coronavirus. Full stop,’ Biden said last month when giving a speech in Atlanta after meeting with Asian-American community leaders in the wake of the series of spa shootings where Asian women were predominantly targeted.

‘I think there’s no question that some of the damaging rhetoric that we saw during the prior administration blaming – calling COVID the Wuhan virus or other things, led to perceptions of the Asian-American community that are inaccurate, unfair, have raised threatening, has elevated threats against Asian-Americans and we’re seeing that around the country,’ Psaki said in a March briefing.

Trump has continued to use the term ‘China virus’ in statements since leaving office.

Biden made moves just days after his sweaing-in to stop usage of those terms by signing an executive order titled ‘Memorandum Condemning and Combating Racism, Xenophobia, and Intolerance Against Asian Americans and Pacific Islanders in the United States‘ on day No. 6 of his presidency.

‘The Federal Government must recognize that it has played a role in furthering these xenophobic sentiments through the actions of political leaders, including references to the COVID-19 pandemic by the geographic location of its origin,’ the order said.

‘Such statements have stoked unfounded fears and perpetuated stigma about Asian Americans and Pacific Islanders and have contributed to increasing rates of bullying, harassment, and hate crimes against AAPI persons,’ it continued.

In late March, Attorney General Merrick Garland ordered a review of how the Justice Department can best deploy its resources to combat hate crimes against Asian-Americans.

At the same time, the Biden administration said $49.5 million from COVID-19 relief funds would go toward community programs to help victims.

More recently, Japanse Prime Minister Yoshihide Suga made the surge of hate crimes in the U.S. an international concern, telling reporters in the Rose Garden on Friday that he had brought up the issue with Biden during their in-person bilateral meeting.

‘President Biden’s comment [that] discriminations or violences cannot [be] allowed and that he firmly opposes was extremely encouraging for me and I have renewed my confidence in American democracy once again,’ the Japanese leader added, through his English translator.

The group Stop AAPI Hate – the acronym that stand for Asian-American and Pacific Islander – released a report last month that said there were 3,795 incidents reported to the group between March 19, 2020 and the end of February 2021.

One concern is that hate crimes are actually underreported.

A piece of the Senate-passed bill is that the DOJ will coordinate with local law enforcement and community groups and share information about hate crime reporting.

Hawley said last week that he planned to vote no on the measure calling it ‘too open ended,’ according to CNN.

The bill mandates ‘all this data collection in expansive categories that the federal government will collect and maintain.’

‘That concerns me,’ Hawley said.

Democratic Sen. Mazie Hirono of Hawaii worked with Republican Sen. Susan Collins of Maine to get the legislation in bipartisan shape, allowing for its near universal passage.

Senate Majority Leader Chuck Schumer, a New York Democrat, heralded its passage as a message to bigots: ‘we’re going after you.’

HIGH SOCIETY: Louise Backstrom pictured at an A-list charity gala this summer It’s a tale of fabulous wealth and complicated romance worthy of a Jilly Cooper novel. But the story of how a stunning billionaire had the perfect married life but blew it all up for a penniless hunk who worked as a topless butler…

Embassy staff heading to Glasgow for the COP26 have been delayed due to the travel chaos sparked by last night’s torrential downpours, a German ambassador today claimed. Andreas Michaelis, Germany‘s ambassador to the UK, says embassies in London have been unable to send staff up to the climate conference due to the flooding in the…

Getty Andre Iguodala directs the Miami Heat offense during a January 25 game against the Brooklyn Nets. Five days into the NBA’s free agency period, the Brooklyn Nets have made multiple moves to help bolster their roster depth ahead of a championship run in 2022. Sean Marks started things off by re-signing Blake Griffin to…

A Houston Dynamo fan picked an awkward time to propose to his partner during their MLS clash against LA Galaxy after being forced to watch his side concede. In what would likely have been the best moment of his life, the supporter was filmed getting engaged to his girlfriend, before disaster struck just seconds later….

Southern Britain was last night battered by up to three inches of rain and 45mph gales as forecasters issued an amber weather warning that covered most of London.  Britons are expected to wake up to a deluge of surface water following a night of torrential rain caused by a storm that was yesterday named Aurore…