President Joe Biden put forward a $6 trillion budget proposal for Fiscal Year 2022 to pay for his Americans Jobs Plan, American Families Plan and other investments. The budget request for his jobs plan, which focuses on investment in real infrastructure, could go down as he continues to negotiate with Republicans.

The President’s plan will modernize 20,000 miles of highways, roads, and main-streets. It will fix the ten most economically significant bridges in the Nation in need of reconstruction. It also will repair the worst 10,000 smaller bridges, providing critical linkages to communities. And, it will replace thousands of buses and rail cars, repair hundreds of stations, renew airports, modernize Ports of Entry and expand transit and rail into new communities.

The President’s plan will eliminate all lead pipes and service lines in our drinking water systems, improving the health of the Nation’s children and communities of color. It will put hundreds of thousands of people to work laying thousands of miles of transmission lines and capping hundreds of thousands of orphan oil and gas wells and abandoned mines. And, it will bring affordable, reliable, high-speed broadband to every American, including the more than 35 percent of rural Americans who lack access to broadband at minimally acceptable speeds.

These workers–the majority of whom are women of color—have been underpaid and undervalued for too long. The President’s plan makes substantial investments in the infrastructure of our care economy, starting by creating new and better jobs for caregiving workers. It also provides home- and community-based care for older people and people with disabilities who would otherwise have to wait years to get services they need.

Revitalize Manufacturing, Secure U.S. Supply Chains, Invest in R&D, and Train Americans for the Jobs of the Future

The President’s plan will ensure that the best, diverse minds in America are put to work creating the innovations of the future while creating hundreds of thousands of quality jobs today. Our workers will build and make things in every part of America, and they will be trained for well-paying, middle-class jobs using evidence-based approaches such as sector-based training and apprenticeship.

The American Families Plan will provide universal, high-quality preschool to all three- and four- year-olds. It will provide Americans two years of free community college. It will invest in making college more affordable for low- and middle-income students, including students at Historically Black Colleges and Universities (HBCUs), Tribal Colleges and Universities (TCUs), and minority-serving institutions (MSIs) such as Hispanic-serving institutions and Asian American and Native American Pacific Islanderserving institutions. It will increase the Pell Grant by $1,475, alongside an additional $400 increase in the Budget, for the largest one-time increase in the grant’s history. And, it will invest in our teachers as well as our students, improving teacher training and support so that our schools become engines of growth at every level.

The American Families Plan will provide direct support to families to ensure that low- and middle-income families spend no more than seven percent of their income on child care, and that the child care they access is of high-quality. It will also provide direct support to workers and families by creating a national comprehensive paid family and medical leave program that will bring the American system in line with competitor nations that offer paid leave programs. And, the plan will provide critical nutrition

Extend Tax Cuts for Families with Children and American Workers

The American Families Plan will extend key tax cuts in the American Rescue Plan that benefit lower- and middle-income workers and families, including the expansions of the Child Tax Credit, the Earned Income Tax Credit, and the Child and Dependent Care Tax Credit.

The American Families Plan will also extend the expanded health insurance tax credits in the American Rescue Plan. These improvements are lowering premiums for 9 million current enrollees by an average of $50 per person per month and making them permanent will let an estimated four million uninsured people gain coverage. The American Families Plan also makes historic investments to improve maternal health and reduce maternal mortality. The Plan will also support the families of veterans receiving health care services.

REINVESTING IN THE FOUNDATIONS OF OUR NATION’S STRENGTH

The Budget proposes a historic $36.5 billion investment in Title I schools, a $20 billion increase from the 2021 enacted level. This investment would provide historically under-resourced schools with the funding needed to deliver a high-quality education to all of their students.

Launches Advanced Research Projects Agency for Health (ARPA-H). The Budget includes a major investment of $6.5 billion to launch ARPA-H, which would provide significant increases in direct Federal research and development spending in health. With an initial focus on cancer and other diseases such as diabetes and Alzheimer’s, this major investment in Federal research and development would drive transformational innovation in health research and speed application and implementation of health breakthroughs.

Makes a Major Investment to Help End the Opioid Epidemic.

The Budget includes a historic investment of $10.7 billion in discretionary funding in the Department of Health and Human Services, an increase of $3.9 billion over the 2021 enacted level, to support research, prevention, treatment, and recovery support services, with targeted investments to support populations with unique needs, including Native Americans, older Americans, and rural populations. The Budget also includes $621 million specific to the Department of Veterans Affair’s Opioid Prevention and Treatment programs.

Invests in Tackling the Climate Crisis

The Budget includes major new climate change investments—an increase of more than $14 billion compared to 2021—across nearly every agency to: restore the critical capacity needed to carry out their core functions and to take a whole-of-government approach to tackling climate change; secure environmental justice for communities that have been left behind through the largest direct investment in environmental justice in history; and help developing countries reduce emissions and adapt to climate change. •

The Budget includes $2.1 billion, an increase of $232 million above the 2021 enacted level, for DOJ to address the gun violence public health crisis plaguing communities across the Nation. This level supports existing programs to improve background check systems and invests in new programs to incentivize state adoption of gun licensing laws and establish voluntary gun buyback pilot programs. Combined, the requests for DOJ and Department of Health and Human Services (HHS) include $200 million to support a new Community Violence Intervention initiative to implement evidence-based community violence interventions locally. This funding is an addition to the American Jobs Plan’s $5 billion over eight years investment in community violence interventions to address the increase in homicides disproportionately affecting Black and brown Americans

The Budget proposes to provide $30.4 billion for Housing Choice Vouchers, expanding vital housing assistance to 200,000 more families, with a focus on those who are homeless or fleeing domestic violence. The Budget also builds on important provisions included in the American Rescue Plan Act of 2021 by providing a $500 million increase for Homeless Assistance Grants to support more than 100,000 households—including survivors of domestic violence and homeless youth, helping prevent and reduce homelessness.

The Budget supports significant increases for civil rights offices and activities across Federal agencies to ensure that the Nation’s laws are enforced fairly and equitably. • Invests in Efforts to End Gender-Based Violence. The Budget includes a historic investment of $1 billion in total funding for DOJ Violence Against Women Act programs, nearly double the 2021 level, including funding for new programs. In addition, the request provides funding at HHS for domestic violence hotlines and for cash assistance, medical support and services, and emergency shelters for survivors.

The Budget proposes the resources necessary to fulfill the President’s commitment to rebuild the Nation’s badly damaged refugee admissions program and support up to 125,000 admissions in 2022. The Budget would also revitalize U.S. leadership in Central America to address the root causes of irregular migration, providing $861 million in assistance to the region. The Budget provides $345 million for the United States Citizenship and Immigration Services to adjudicate naturalization and asylum cases of those who have been waiting for years. And it increases the budget of the Executive Office for Immigration Review by 21 percent to $891 million to reduce court backlogs by hiring 100 new immigration judges and support teams.

To begin redressing long-standing, stark inequities experienced by American Indians and Alaska Natives, the Budget proposes to dramatically increase funding for the Indian Health Service (IHS) by $2.2 billion and provides $900 million to fund tribal efforts to expand affordable housing, improve housing conditions and infrastructure, and increase economic opportunities for low-income families. The Budget also includes an increase of more than $450 million to facilitate climate mitigation, resilience, adaptation, and environmental justice projects in Indian Country, including investment to begin the process of transitioning tribal colleges in the country to renewable energy.

Brexit Minister Lord Frost warned the EU to ‘stay calm and keep things in proportion’ today as he sought to calm tensions over post-Brexit trade rules. The Tory frontbencher addressed peers amid claims that Brussels is drawing up a retaliation package in a bid to stop Boris Johnson going through with threats to suspend the Northern Ireland protocol. Brussels…

Terrified locals have voiced their fears after a teenage girl was raped in an alleyway in broad daylight near Bradford. The 18-year-old was attacked near a pub in Wibsey, a town outside of the city on Friday afternoon, police confirmed.  Detectives have launched an investigation into the attack but have not yet made any arrests. …

A recent report from Politico showed the House Democrats would have a hard time keeping their majority after redistricting finalizes throughout the country. Democrats are struggling as they try to find candidates to run for office and possibly see no way to expand the seat they are looking to flip due to the redistricting. Additionally, many members… 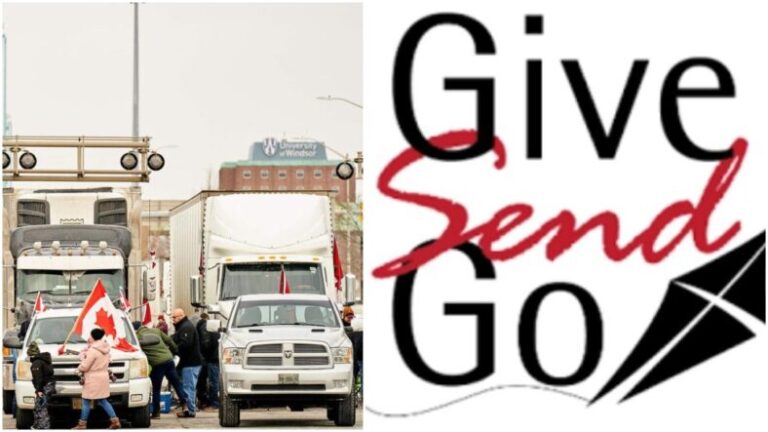 A patriot has began a GiveSendGo marketing campaign to assist the truckers who’re at the moment occupying the Ambassador Bridge on the border of Detroit, Mich. and Windsor, Ontario, Canada. The patriot, Holly Spalding of Milford, Mich., needs to present the truckers provides with a view to facilitate their heroic protest for freedom. Gary’s Catering…