Lawmakers and local leaders are in a frenzy over the prospect of coronavirus vaccine passports as Republicans denounce it as the ‘mark of the beast’ and GOP governors weigh banning it.

‘Is this something like Biden’s mark of the beast? Because that’s really disturbing and not good,’ she continued.

In a tweet she wrote: ‘They are actually talking about people’s ability to buy and sell linked to the vaccine passport. They might as well call it Biden’s Mark of the Beast.’

Florida Governor Ron DeSantis went a step further by claiming he will take executive action banning businesses and local governments in the state from requiring some sort of proof of inoculation.

Republicans are in a fit over President Joe Biden’s proposal for a ‘vaccine passport’ system. Georgia Representative Marjorie Taylor Greene called it ‘Biden’s Mark of the Beast’ 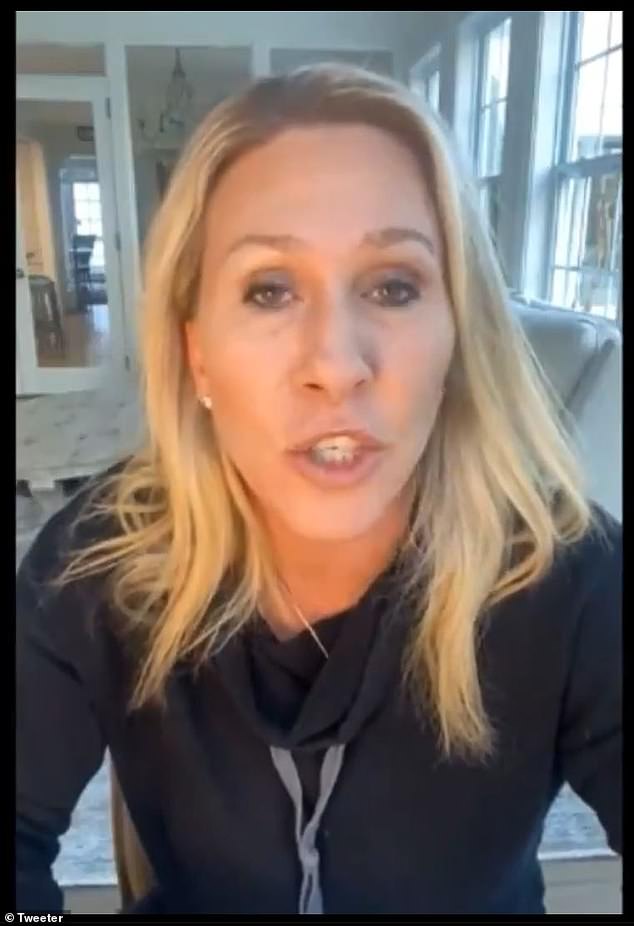 In a video, the Republican congresswoman call it ‘corporate communism’ to allow businesses to require individuals have proof of inoculation against coronavirus 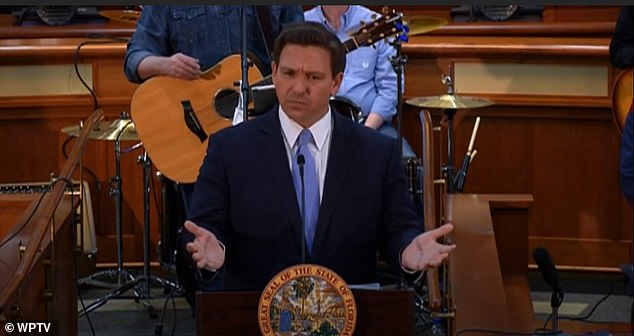 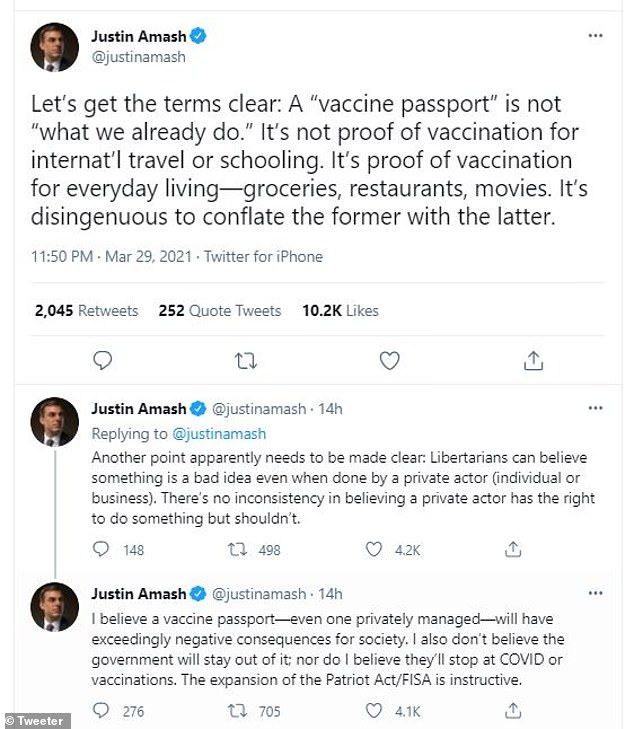 South Dakota Governor Kristi Noem did not go so far as to call for a ban, but did say on Twitter Monday that it is un-American.

‘The @joebiden #CovidPassport proposal is one of the most un American ideas in our nation’s history,’ she lamented. ‘We as Americans should oppose this oppression. #freedom’.

Amash, who left the Republican Party to become an independent libertarian while serving as a representative for Michigan’s 3rd District, tweeted his opposition to requiring vaccine passports.

‘No vaccine passport,’ he wrote. ‘It doesn’t get much more dystopian than being required to show your ‘health papers’ wherever you go.’

President Joe Biden’s administration vowed Monday that it would leave any sort of vaccine passport requirements up to ‘private industry.’ Amash isn’t buying it, claiming the government always has a way of getting involved.

The former congressman continued: ‘Another point apparently needs to be made clear: Libertarians can believe something is a bad idea even when done by a private actor (individual or business). There’s no inconsistency in believing a private actor has the right to do something but shouldn’t.’

‘I believe a vaccine passport—even one privately managed—will have exceedingly negative consequences for society,’ he tweeted. ‘I also don’t believe the government will stay out of it; nor do I believe they’ll stop at COVID or vaccinations. The expansion of the Patriot Act/FISA is instructive.’ 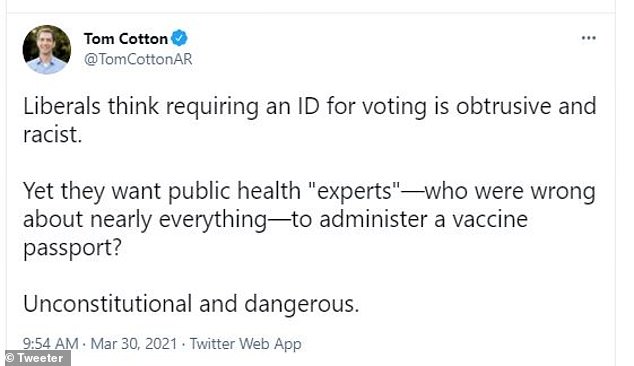 GOP Representative Jim Jordan also claimed Biden is being more lax with laws on illegal immigration than those in the U.S. who do not want to get vaccinated

GOP lawmakers took to Twitter to point out the hypocrisy a vaccine passport poses.

Ohio Rep. Jim Jordan said Biden’s administration is taking a more hard-line approach to its own citizens freedoms than it is on illegal immigration.

‘The Biden Administration: -Considering a ‘vaccination passport’ for Americans. -But doesn’t seem to care about passports when it comes to illegal migrants crossing the southern border,’ Jordan tweeted Monday.

Kentucky Sen. Rand Paul, on the other hand, said progressives can’t decry voter ID laws as racist then try to implement the same laws regarding those who have been vaccinated and not.

‘If you think voter ID is racist, but a vaccine passport is just fine, you need some serious help thinking through public policy,’ Paul posted on Twitter.

Sen. Tom Cotton of Arkansas tweeted: ‘Liberals think requiring an ID for voting is obtrusive and racist. Yet they want public health ‘experts’—who were wrong about nearly everything—to administer a vaccine passport?’

‘Unconstitutional and dangerous,’ he said.

Connecticut’s Democratic Gov. Ned Lamont proposed a segregation-type system, claiming it’s not fair to impose passport requirements when not everyone has access to vaccinations.

‘My instinct is, look, we’re not going to be doing anything about that for the near term. It’s not fair. Not everybody has access to the vaccine yet,’ Lamont said Wednesday, adding he’s spoken to the White House about his reservations.

He threw out the idea that establishments could impose a vaccinated and non-vaccinated section.

A spokesperson for Donald Trump Jr. urged people to call companies and express their opposition to them imposing passports.

He then proceeded to list the numbers of dozens of corporations

‘If Biden & his friends in corporate America are ever going to backdown on vaccine passports, Americans will have to speak out loudly & let them how unpopular they are. This thread is just a start. Important to start contacting every national hospitality chain you can think of,’ he continued in a five-part Twitter thread.

The Biden administration is working with private firms to develop a vaccine passport system, which would likely be available for free through a smartphone app.

But DeSantis said the plans would have ‘huge privacy implications’ which would violate personal freedoms – and many appear to agree.

The Republican said at a press conference at the Florida State Capitol in Tallahassee on Monday: ‘We’re not supportive of that. I think it’s something that people have certain freedoms and individual liberties to make decisions for themselves.’

‘It’s completely unacceptable for either the government or the private sector to impose upon you the requirement that you show proof of vaccine to just simply be able to participate in normal society.’ 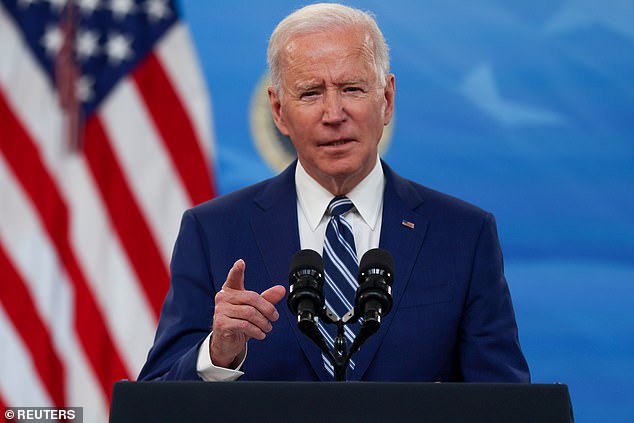 DeSantis, a Trump ally, is preparing to sign an executive order as soon as Tuesday barring the vaccine passports in Florida. He is also calling for the state legislature to pass a bill banning the idea permanently.

The Biden administration said there are currently at least 17 different passport initiatives being developed by public and private entities, while the World Health Organization is working to develop a ‘smart vaccination certificate.’

The White House, however, said Monday that it would not be imposing any restrictions at the federal level related to vaccine passports, like keeping a nationwide database of those inoculated.

Instead, Biden’s Press Secretary Jen Psaki reiterated to reporters Monday that the government would leave it up to the ‘private sector’ on whether they want to require proof of vaccination before allowing customers inside their establishments.

‘We’re going to provide guidance, just as we have, through the CDC,’ Psaki said regarding any sort of vaccination requirement and passport. ‘There’s currently an interagency process that is looking at many of the questions around vaccine verification.’

‘We expect… that a determination or development of a vaccine passport, or whatever you want to call it, will be driven by the private sector,’ she continued in her briefing with reporters at the White House Monday. ‘Ours will more be focused on guidelines that can be used as a basis.’

She assured ‘there will be no centralized, universal federal vaccinations database and no federal mandate requiring everyone to obtain a single vaccination credential.’

Despite this walk back from the administration, Biden signed an executive order in January directing federal agencies to explore feasibility of connecting COVID-19 vaccines to some sort of vaccine cards. 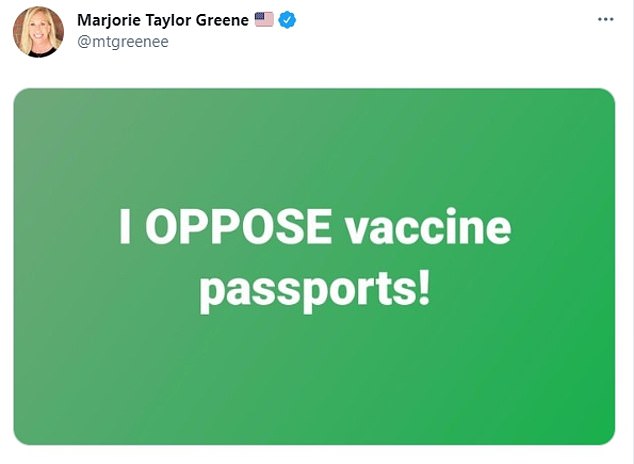 The Excelsior Pass will be accepted at major entertainment venues like Madison Square Garden and Albany’s Times Union Center and residents can either use it on an app or print it out.

But there are concerns about the privacy data required for the passports as well as accessibility issues for those who are socioeconomically disadvantaged.

The developers must also make sure that the systems aren’t breached and prevent fake digital passports from being issued. Another dilemma is how long immunity lasts and whether COVID-19 variants need to be taken into account. 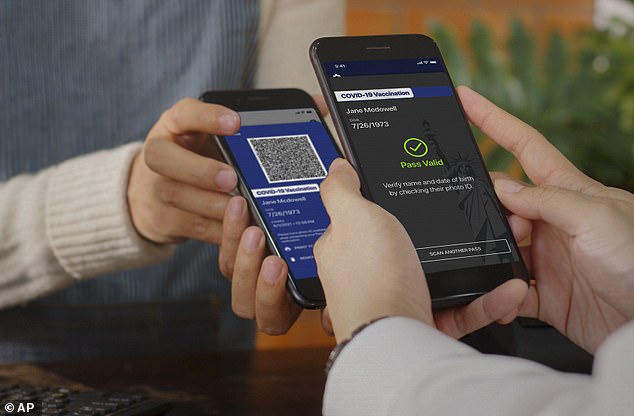 Excelsior officials say the app does not store or track private health data within the app and works like a mobile airline boarding pass with a secure QR code.

But DeSantis wants state legislature to fight the passes which could see Americans discriminated for not having been vaccinated.

He said: ‘I think this is something that has huge privacy implications. It is not necessary to do.’

He previously warned if ‘folks try to start doing it privately, we may have a role to play there as well because I do think it’s unacceptable.’

Other countries and organisations including the European Union, China, and Japan are working on their own versions of the vaccine passports.

In Israel, the most vaccinated country in the world, public events have resumed for those who have been inoculated.

Attendees are required to show a ‘Green Pass, ‘a government-validated certificate showing they had received both doses of the vaccine more than a week prior to the event or that they had recovered from COVID-19 and were presumed immune.

The passes are valid for six months from the time of full vaccination. 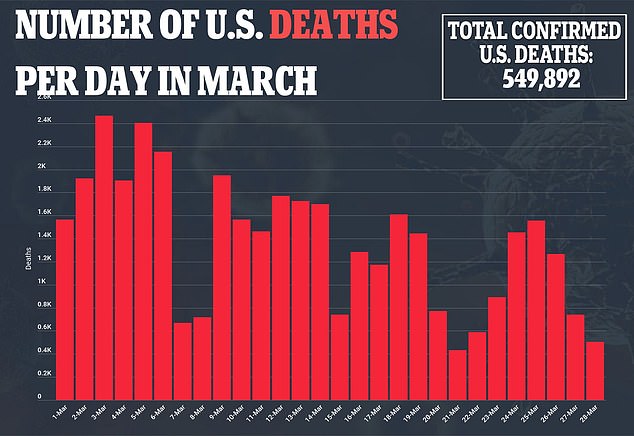 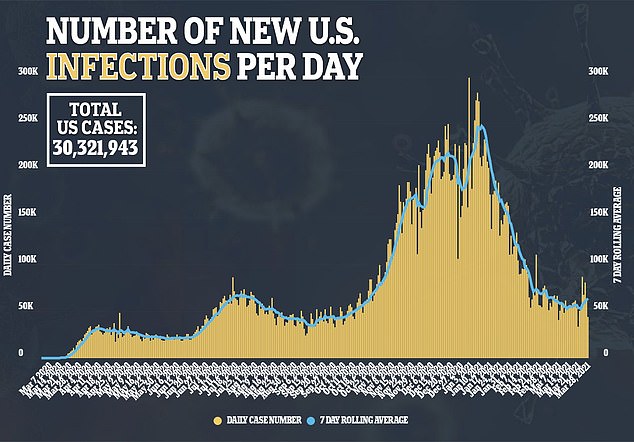 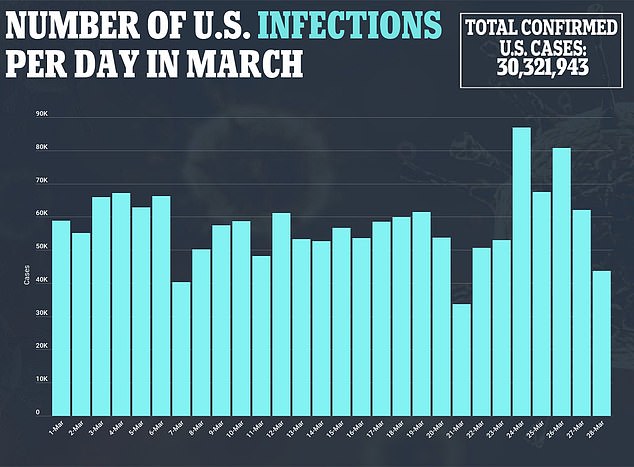 Sources said the Biden administration’s effort is being led by the Department of Health and Human Services.

‘Our role is to help ensure that any solutions in this area should be simple, free, open source, accessible to people both digitally and on paper, and designed from the start to protect people’s privacy,’ Zients told reporters on March 12.

Zients is expected to provide more information about the government’s efforts toward developing the passport later this week.

There is concern, however, that the administration’s embrace of the project could be interpreted by some as a government mandate for citizens to get vaccinated.

The former star of popular Netflix docuseries Cheer was jailed for 12 years after pleading guilty to federal charges...

Who is Shawn Fanning? Born under the sign of Sagittarius on the 22nd of November 1980, in Brockton, Massachusetts USA,...
- Advertisement -