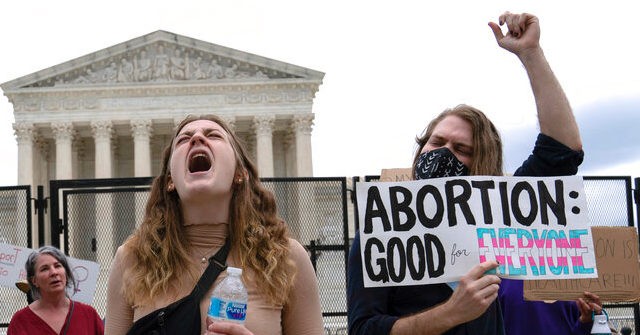 Democrats are defending Roe v. Wade as the foundation of women’s rights, but their bill to codify Roe into law lacks the word “woman,” and only mentions the word “women” in the title.

The move to codify Roe began as an attempt to fulfill a campaign promise by President Joe Biden, who said that he would urge Congress to pass a law to make abortion legal nationwide in the event that a conservative Supreme Court struck down the controversial 1973 precedent that granted a “right” to abortion.

That pledge has become more urgent since last week, when a majority opinion by Justice Samuel Alito striking down Roe in the Dobbs v. Jackson Women’s Health Organization case was leaked to the media, triggering alarm among Democrats.

But the 2021 bill to codify Roe, the Women’s Health Protection Act, did far more than that. It also included radical provisions on gender, including the proclamation that biological women who identify as transgender men can also become pregnant:

In addition, the bill included other radical provisions on “reproductive justice,” calling it a fight against “white supremacy.”

Byron York of the Washington Examiner noted Monday that the 2022 version of the Women’s Health Protection Act had stripped out the radical “roots” of the legislation. However, the new legislation failed to include the word “woman” at all (original emphasis):

The 2021 bill is, in many ways, the bare, exposed id of today’s Democratic Party. It is filled with the kind of language that turns off voters in the vast middle of the electorate — Democrats, Republicans, and independents. And that is why, now that the Supreme Court leak has pushed abortion to the front of the political debate, and with midterm elections on the way, Democrats have removed all that language from the 2021 version of the bill.

That stuff about Reproductive Justice? It’s gone. About BIPOC? It’s gone, too. Nonbinary people? Gone. White supremacy? Nowhere to be found. Now that Democrats know the public will be watching, thanks to the Supreme Court leak, they don’t want people to see what they really think about abortion.

One notable aspect of the 2021 bill has made it into the 2022 bill. Even though it is known as the “Women’s Health Protection Act,” the title is the only place in the entire 2022 bill where the word “women” or “woman” appears. Instead, the 2022 bill is designed to cover any “person” who is pregnant. It describes its purpose as protecting “a person’s ability to determine whether to continue or end a pregnancy,” and it would strike down any effort to “interfere with a person’s ability to terminate a pregnancy [or] to diminish or in any way negatively affect a person’s constitutional right to terminate a pregnancy.”

Senate Majority Leader Chuck Schumer (D-NY) has scheduled a vote on the bill for later this week.

Joel B. Pollak is Senior Editor-at-Large at Breitbart News and the host of Breitbart News Sunday on Sirius XM Patriot on Sunday evenings from 7 p.m. to 10 p.m. ET (4 p.m. to 7 p.m. PT). He is the author of the recent e-book, Neither Free nor Fair: The 2020 U.S. Presidential Election. His recent book, RED NOVEMBER, tells the story of the 2020 Democratic presidential primary from a conservative perspective. He is a winner of the 2018 Robert Novak Journalism Alumni Fellowship. Follow him on Twitter at @joelpollak.

Dyson slashes $350 off its iconic vacuums...

Rachel Wolfson is an American actress, writer, comedian, model, entertainer, and media personality. She is well-known for her roles...

A man has been injured and his pet killed following a vicious attack by two off-leash dogs, despite the...

Camilla Waldman Wiki – She is a well-known personality already and people have been interested in knowing about her,...
- Advertisement -

Where is The Circle Season 4 Winner Today? Update

Camilla Waldman Wiki – She is a well-known personality...
News

Multiple news outlets and a Texas state senator are...
- Advertisement -