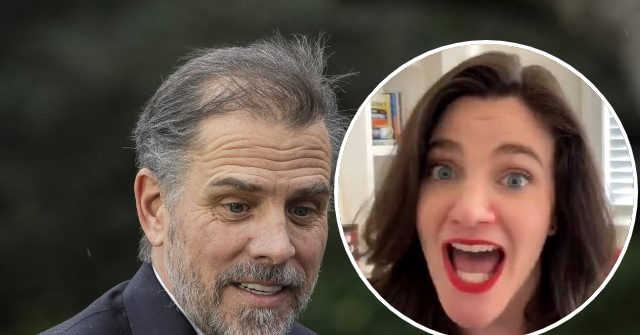 Hunter sat on the board of the Ukrainian Burisma Holdings company from 2014 to 2019, while Joe Biden was vice president and campaigned for president during the 2020 election cycle. Hunter was compensated $83,000 per month as a board director, which raises questions if Hunter was selling influence to his father in the Obama administration. Joe Biden and his staff have denied at least seven times that Biden has been involved in his son’s dealings. But evidence shows Joe Biden was involved in Hunter’s business affairs at least eleven times.

Yet Jankowicz claimed Hunter’s business scheme was legitimate and no cause for alarm.

She spoke to BuzzFeed News reporter Jane Lytvynenk. Comments begin at the 42:23 mark in the video below:

The accusation is that Hunter Biden, in serving on the board of a Ukrainian company, which you know he is allowed to do, he was not the only foreign expert serving on the board of a Ukrainian company, was involved in some corrupt behavior of that company. This company has been investigated for a long time. Burisma is the name of the company. There’s never been any indication that Hunter Biden was involved in anything untoward. There are questions about whether he should have taken that board appointment given his father’s role as, you know, the Obama administration’s main emissary to Ukraine, but that’s not necessarily something that Joe Biden has control over. It certainly has nothing to do with Joe Biden’s policies toward Ukraine.

And this has, you know, spun into a whole other host of nonsense basically that Joe Biden withheld aid to Ukraine in order to get a resolution to this investigation into Burisma and get his son out of the limelight. It’s just, it’s a load of nonsense. The investigation that is in question was closed at the time that Biden was kind of doing a carrot and stick routine which many diplomats do related to Ukraine in order to get some some financial reforms through and anti-corruption reforms. And there’s a whole host of other allegations that just don’t even bear repeating.

Jankowicz’s remarks, from before she was Joe Biden’s Minister of Truth or “Disinformation Governance Board” head, came after Joe  Biden was pictured golfing with his son Hunter and Devon Archer, Hunter’s fellow board member for Ukrainian gas company Burisma, in 2014. Archer is now in prison for fraud.

The photograph was first released by Fox News’ Tucker Carlson Tonight in September 2019  here. In the article, Fox News explains that the photograph shows Joe and Hunter Biden in the Hamptons with Devon Archer, a business associate of Hunter Biden who served on the board of Burisma with him after they both joined in April 2014.

The photograph was taken in August 2014, a source close to Archer told Fox News. The photograph includes a fourth man who has not been identified. However, he is not Burisma’s  top executive Taras Burdeinyi or founder Mykola Zlochevsky. Photographs of both men can be seen here and here.

Archer, who Politico reported was convicted of fraud ( here ), joined the board of Burisma with Hunter Biden in April 2014 ( here ). Archer left the board of Burisma after initially being charged in this scheme ( here here ) and Hunter announced his departure in 2019 ( here  ).

An Aug 2014 photo shows #JoeBiden golfing in The Hamptons, with 3 #Burisma board members, including #DevonArcher & his son, #HunterBiden, who joined joined #BurismaHoldings April 2014. “I have never spoken to my son about his overseas business dealings.”https://t.co/1mDUGfeuxx pic.twitter.com/V50IsqmjFA

In 2019, Hunter revealed in texts the Biden family’s payout vehicle. The detailed mechanism indicates a collection of 50 percent of familial salaries for 30 years. “I hope you all can do what I did and pay for everything for this entire family for 30 years,” Hunter described in texts to his daughter. “It’s really hard. But don’t worry, unlike Pop [Joe], I won’t make you give me half your salary.”

The reported texts do not reveal when the 30 years began or ended, or whether Joe Biden is still a part of the payment scheme as president. The Biden’s family payment mechanism of collecting 50 percent of family salaries for 30 years could be legal “predicates” for racketeering charges, according to former Utah U.S. attorney Brett Tolman.

Follow Wendell Husebø on Twitter and Gettr @WendellHusebø. He is the author of Politics of Slave Morality.

US customs agents saw a 33 per cent spike...

An American rapper named Lil keed is no more....

West Australian cops have discovered $128million worth of cocaine inside a seemingly ordinary campervan as two men are arrested. Officers...

Nationalism in the Republican Party is on the rise! Pennsylvania Senate candidate Kathy Barnette, who Big League Politics has...

Sports Illustrated has announced its new cover stars for the 2022 Swimsuit Issue and this year, the publication is...
- Advertisement -

After escaping the Taliban's clutches, Bashir and Kassim Mohammed...
News

As Pennsylvania Republicans prepare to choose a nominee...
News

Julia Fox headed to the...
News

An American rapper named Lil keed is no more....
News

The pro-abortion machine has been working overtime to churn...
News

A Texas judge said Disney World would be 'welcome'...
- Advertisement -

DJ Quicksilva Wife Ashley Silva: Did Ashley His Manager? Everything On Their Children And Married Life