Donald Trump is looking ‘very seriously’ at running for president again in 2024, he announced on Monday night, as he attacked Joe Biden for his handling of the southern border and returned to his 2016 campaign warning that Latin America was ‘sending rapists’ into the United States.

In his first televised interview since leaving the White House, Trump told Fox News’ Sean Hannity that he was definitely weighing up a bid to retake the presidency.

‘I am looking at it very seriously,’ he said. ‘Beyond seriously.’

The former president also attacked the FDA, saying that the agency is protecting Pfizer by choosing to halt Johnson & Johnson’s vaccination program. 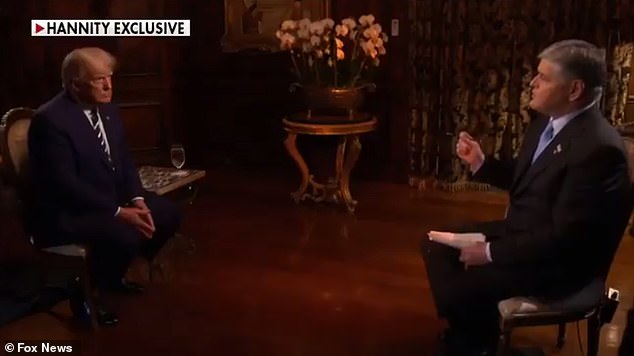 He said he believed his high poll ratings – what he termed his ‘tremendous numbers’ – was due to disappointment in Biden’s rule.

‘I’ve got tremendous numbers. Nobody has ever gotten the numbers I got. No sitting president has come even close. There is more popularity now the end there was the day before the election,’ he said.

But, the 74-year-old said he was not ready to officially declare his candidacy.

‘From a legal standpoint, I don’t want to really talk about it yet,’ he added.

Trump, speaking from his Mar-a-Lago estate in Florida, said that he was most proud of ‘helping people’.

He singled out having reduced taxes, reduced the cost of prescription drugs, created Space Force, and built parts of a wall along the border with Mexico.

The former president said he build 450 miles: the vast majority of the 450 miles was in fact repair or reinforcement of existing structures, and only 80 miles was newly created in locations where no barriers previously existed.

He said that his immigration policies were working, telling Hannity that Biden’s unpicking of his work was having a devastating effect.

More than 170,000 migrants were taken into custody at the U.S.-Mexico border in March – the highest monthly total since at least 2006. 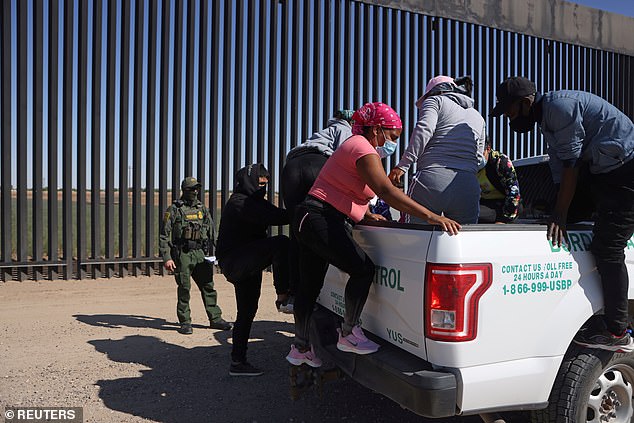 Migrants from Haiti, Cuba and Mexico climb into a CBP pickup on Monday in Arizona 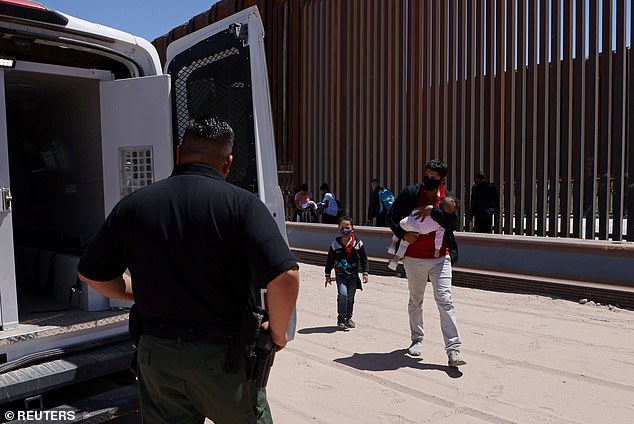 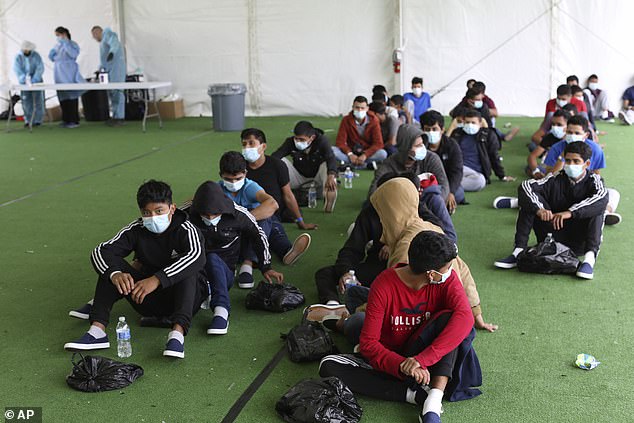 A line of young migrants wait to be tested for COVID in Donna, Texas on March 30 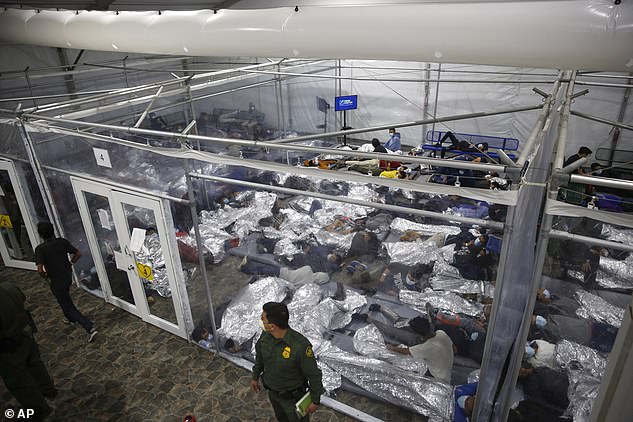 Unaccompanied minors who crossed the border alone are seen at a facility in Donna, Texas

‘All he had to do was leave it alone,’ said Trump, pointing out that tens of thousands of migrants are currently arriving, and claiming that they were criminals and drug traffickers.

‘They are sending us not their best people,’ Trump said, reprising his infamous 2016 campaign claim.

‘They are sending us people that in many cases – not in all cases – are murderers, drug dealers, human traffickers, rapists, really bad people.

‘They are sending people from prisons.’

Trump, who cut financial aid to Guatemala, El Salvador and Honduras in a bid to pressure them to stem the flows of migrants, said that the Biden administration was misguided in their discussion about restoring aid to the Central American nations, from where the majority of migrants currently arrive.

He praised Mexico’s leader, Andres Manuel Lopez Obrador, and spoke warmly of their working relationship – despite their differing ideologies.

The former president said that all his work on the border was being unpicked.

‘It’s a horrible situation,’ he said. ‘It could destroy our country. People are pouring in.’

The billionaire businessman has bucked tradition by remaining firmly in the political fray on leaving the White House.

While most former presidents, by convention and out of respect, refrain from commenting on their successor’s first years, Trump has been issuing regular press releases and granting multiple interviews. 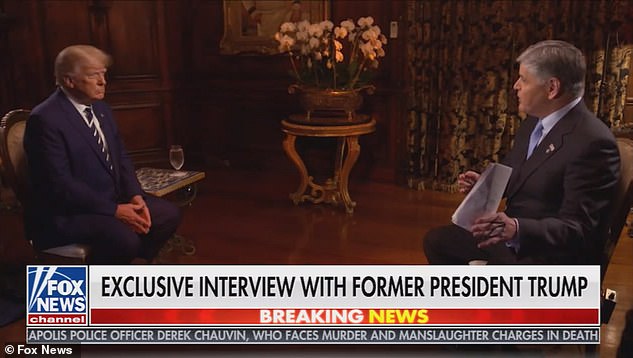 He told Hannity that he was looking forward to campaigning on behalf of Republican candidates for the 2022 election, and said they should embrace his policies ‘if they want to win’.

He singled out Sarah Huckabee Sanders, his former press secretary who is running for the governor of Arkansas, and races to watch in Florida, North Carolina – where his daughter-in-law Lara is considering a Senate run – New Hampshire and Ohio.

Turning to the coronavirus pandemic, Trump said that the Food and Drug Administration (FDA) ‘hated’ him, because he pushed them for a speedy approval of the COVID vaccines, and that Pfizer resented him for driving down the price of pharmaceuticals.

He claimed that ‘Pfizer is in with the FDA’ – and alleged that the FDA deliberately thwarted Johnson & Johnson’s vaccination program, in a bid to boost demand for Pfizer’s alternative.

Johnson & Johnson’s COVID vaccine was called into question by the FDA last week after six people out of 6.8 million given the vaccine reported blood clots. One of them, a woman in Virginia, died.

Trump said he felt the decision by the FDA and the Centers for Disease Control and Prevention (CDC) to warn against Johnson & Johnson’s drug was ‘so stupid.’

He said: ‘That is the worst thing they could have done from a public relations standpoint.

‘They paused to the Johnson & Johnson vaccine. And it probably affects the other vaccines a little bit. It has had a devastating impact.

‘They get along with Pfizer so well. And Pfizer, Pfizer doesn’t like me because I pushed them on prescription drugs.

‘And I’ll tell you something. I think it is very suspect what they did with Johnson & Johnson.

‘Because the only people that are happy about that are Pfizer and Moderna.’

Republicans lambasted Joe Biden for ‘going on vacation’ on Sunday as he remained silent on Afghanistan while the capital city of Kabul was overrun by the Taliban and the president hunkered down at Camp David. ‘First thing’s first, why is Joe Biden on vacation, why hasn’t his administration taken a single question? This is an…

JACKSON – The four schoolchildren of a township mother are dismissed from their private school in Lakewood at four different times — meaning she makes four separate pick-ups every afternoon school is in session, plus the morning drop-off. It wasn’t that long ago — last year, in fact — that her children would simply take a school bus from…

Footage captured the moment a California officer tried to take advantage of copyright laws by playing a Taylor Swift song so his confrontation with a protestor could not be uploaded to YouTube.  The incident took place on Tuesday in front of the Alameda Courthouse in Oakland when an officer, identified by the Los Angeles Times as…

The Duke of Sussex has spoken for the first time about how the Duke of Edinburgh gave him the space to talk about serving in Afghanistan. Harry was twice deployed to Helmand province during the UK’s military operations, and in a BBC tribute programme to Philip he describes how his grandfather would ‘never probe’ but…

Pfizer’s CEO is predicting we’ll be back to living a “normal live” within a year: Pfizer CEO predicts “normal life” within a year https://t.co/4cEf4LWToJ pic.twitter.com/ccZQpcI5pM — The Hill (@thehill) September 26, 2021 This is news to the millions of Americans already living normal lives: This is rich. https://t.co/NbTPeQ8Sbl — Katrina Pierson (@KatrinaPierson) September 26, 2021…