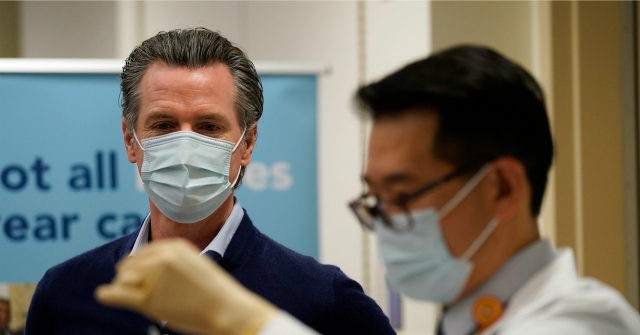 California Gov. Gavin Newsom (D) announced plans Wednesday to spend an additional $57 million on abortions for uninsured, out-of-state residents who travel to the state to have abortions because of restrictions on abortion in their own states.

The announcement brings Newsom’s proposed spending on out-of-state abortion tourism to $125 million, over and above what he proposed in January. The new spending comes ahead of an anticipated decision by the U.S. Supreme Court to overturn Roe v. Wade, the controversial 1973 ruling that established a “right” to abortion. A leaked majority opinion by Justice Samuel Alito in the case of Dobbs v. Jackson Women’s Health Organization would return authority over abortion to the separate states.

Upon news of the probable decision, Gov. Newsom vowed to build a “firewall” around the state to protect abortion, proposing an amendment to the state constitution granting the right to an abortion to replace the federal one.

On Wednesday, he added that the state would spend on abortions for uninsured visitors, as well as on a “California Reproductive Justice & Freedom Fund” for pro-abortion community organizations, a “Reproductive Rights” website, and research on the “unmet needs for reproductive health care services.” Newsom also proposed a package of business incentives to encourage companies to relocate to California to take advantage of the state’s liberal abortion laws.

“By updating existing business incentive programs to provide additional consideration for companies leaving states that have enacted restrictions on reproductive rights and anti-LGBTQ+ laws, Governor Newsom is welcoming companies that share California’s values and doubling down on the diversity that makes our economy a global leader,” a statement from Newsom’s office said.

Joel B. Pollak is Senior Editor-at-Large at Breitbart News and the host of Breitbart News Sunday on Sirius XM Patriot on Sunday evenings from 7 p.m. to 10 p.m. ET (4 p.m. to 7 p.m. PT). He is the author of the recent e-book, Neither Free nor Fair: The 2020 U.S. Presidential Election. His recent book, RED NOVEMBER, tells the story of the 2020 Democratic presidential primary from a conservative perspective. He is a winner of the 2018 Robert Novak Journalism Alumni Fellowship. Follow him on Twitter at @joelpollak.