The White House tried to walk back President Joe Biden’s support for pulling the All-Star game from Georgia amid mounting criticism from Republicans claiming it is the victim of a ‘woke mob’.

‘He was not dictating what Major League Baseball should do … dictating they should move the All-Star Game, that was their decision, they made that decision and, as he stated earlier, he certainly supports that,’ press secretary Jen Psaki said during Monday’s briefing.

She then denied trying to rollback what was widely interpreted to be an endorsement of the coming move.

‘I’m trying to articulate clearly to everyone what he said and what the context of his remarks were, the question that was asked and the full scope of his answer,’ Psaki explained. ‘And I think it’s been short-handed to no one’s fault because it’s been repeated a bit without the full context.’

The press secretary said that Biden ‘supports them being able to make the decision.’

‘And respond to what their players’ asks are, given many of them are, of course, impacted by these laws,’ Psaki continued. 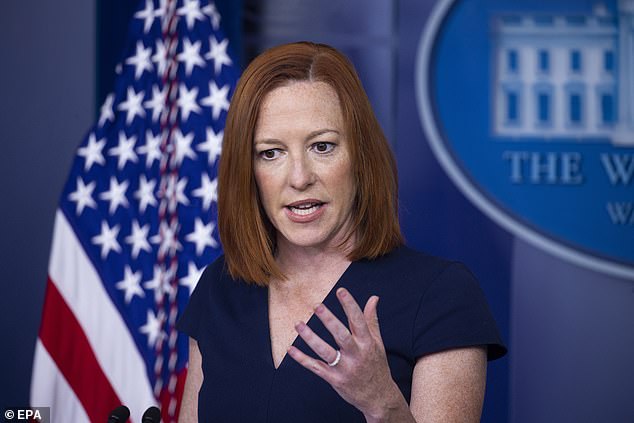 White House press secretary Jen Psaki said Monday that President Joe Biden wasn’t ‘dictating’ that the All-Star Game be pulled from Atlanta, but rather he supported Major League Baseball ‘being able to make the decision’

Psaki said the White House wouldn’t advocate for specific boycotts or moves, as she was asked about the upcoming Masters Tournament – also played in Georgia – and events in other states that might be considering laws to restrict voting.

Biden was asked during a sit-down with ESPN’s Sage Steele last week what his view was on the possibility that the All-Star Game could be moved.

‘I think today’s professional athletes are acting incredibly responsibly,’ Biden replied. ‘I would strongly support them doing that. People look to them. They’re leaders.’

On Friday, MLB announced that the game would no longer be held in Atlanta.

Since then, Georgia’s Republican Gov. Brian Kemp and other prominent GOP officials, like Sen. Ted Cruz and Newt Gingrich, have complained about it being the victim of ‘woke’ and cancel culture.

Sen. Marco Rubio wrote Manfred a letter asking if he planned to keep his membership at Augusta, suggesting it would be hypocritical if he stayed a member of the private golf club while pulling the All-Star Game from the state of Georgia.

At Monday’s briefing, Psaki re-read the question posed by ESPN’s Steele on Wedneday and then Biden’s response.

‘That’s not something we’re calling for from the White House,’ she said. ‘Our focus is on working with Congress to put in place voting rights legislation, working with leaders like Stacey Abrams and others who are advocating more expanded laws.’

Abrams, a voting rights activist who ran for Georgia governor and lost in 2018, wrote in an op-ed last week that boycotts of Georgia businesses may be premature and negatively impact working people.

When asked Monday whether Biden considered the financial damage of pulling the All-Star Game from Atlanta Psaki replied, ‘Again, he was doing an interview … he answered the question.’

The White House’s decision not to lean into Biden’s initial indication of support for moving the game is in stark contrast to the Democrat’s predecessor, who loved engaging in the culture war.

When sports teams acted too ‘woke’ President Donald Trump would make them a display – including disinviting the Philadelphia Eagles from the White House, to have a patriotic event on the South Lawn instead, or having Vice President Mike Pence walk out of an Indianapolis Colts game after players kneeled during the playing of the National Anthem.

Psaki also wouldn’t say that Biden mispoke when he blasted the Georgia voting law during his first official press conference in late March saying that the law cut off voting at 5 p.m.

That statement earned him ‘Four Pinocchios’ from The Washington Post.

The law states that voting ends at 7 p.m. and people in line can still fill out their ballots.

Republicans have complained that the uproar over the Georgia law is disingenuous, because aspects of it actually create more opportunities for voting.

Rather than acknowledge Biden’s fib, Psaki told reporters, ‘I think what’s important is to report on all the components that make it more difficult to vote in the package, in the legislation.’

That was Psaki’s last question before an intrusion by the Easter Bunny, this one a lady rabbit played by press aide Meghan Hays.

In lieu of the traditional Easter Egg Roll, the White House Monday had a male Easter Bunny appear with Biden and first lady Jill Biden on the Truman Balcony to deliver a holiday message. 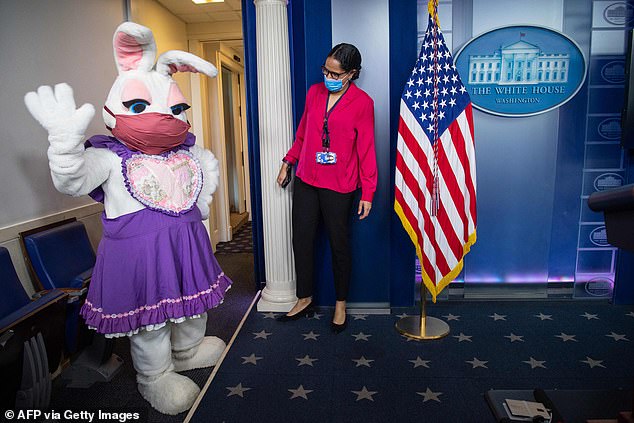 SAVED BY THE BUN: Psaki was being quizzed about a misstatement Biden made about the Georgia voting law when a female Easter Bunny appeared at the end of Monday’s press briefing to mark the day that would have been the Easter Egg Roll 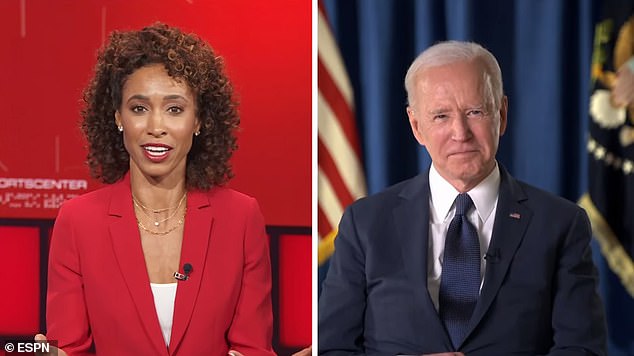 In an interview with ESPN’s Sage Steele (left) last week, President Joe Biden (right) was asked about the All-Star Game potentially being moved from Georgia. ‘I think today’s professional athletes are acting incredibly responsibly. I would strongly support them doing that,’ he said

Nikane Madeira is worldwide famous as a sibling of actress, and model, Kiana Madeira. Kiana Madeira has appeared in...

By Raffaele Huang SINGAPORE--Car sales in the world's biggest auto...

Manchester City got Erling Haaland and Liverpool got Darwin Nunez.Manchester United, having lost at home to Brighton for the...
- Advertisement -

People traffickers have launched a £1,500-a-person ‘summer sale’ to cross the Channel illegally in a dinghy – mainly aimed...