Roe v. Wade is about to be overturned, and no one’s taking it to the streets.

This was not the civil war the corporate media and Democrats have promised for the last 50 years.

Oh, I know a few hundred yahoos descended on the homes of a few Supreme Court justices, an out-and-out felony encouraged by this lawless and deranged White House. But a few hundred yahoos will come out and protest anything. If Chipotle raised the price of guacamole, you could get that many yahoos out. This isn’t guacamole. This is the left’s sacrament of abortion. This is the third rail of third rails. This is civil war time. This is — Hey, where the hell is everyone?

Last week, I wrote about the lack of protests in the wake of a majority opinion overturning Roe v. Wade being leaked out of the Supreme Court — a leak that will hopefully prove true. Five days had passed without any widespread protests when I wrote that piece. But those were five weekdays. So, knowing the weekend was coming and with plenty of time to organize, I closed the piece with this…

Undoubtedly, we’ll see some protests over the weekend, maybe even big ones, but it’s too late to convince me those protests are organic, are anything but the usual-usual organized AstroTurf.

“Undoubtedly” is the word I used. Why? Because there was no doubt in my mind that we would see the streets of Deep Blue Cities filled with angry, pro-infanticide freaks on Saturday and Sunday.

You have to understand that for as long as I’ve been following politics, abortion has been The Issue Of All Issues. Even back in the days when the corporate media still pretended to be unbiased and down the middle, there was none of that phony objectivity when it came to abortion. The media have always been lunatics about abortion. For decades we’ve literally been told that if there’s a second civil war, it will be over abortion.

Okay, where is it?

We may yet get massive protests, but as far as I’m concerned, the jig is up.

This is what I mean…

On November 9, 2016, Donald Trump defeated Hillary Clinton and became the 45th president of the United States. That very same night, the streets were filled with hysterical leftists. 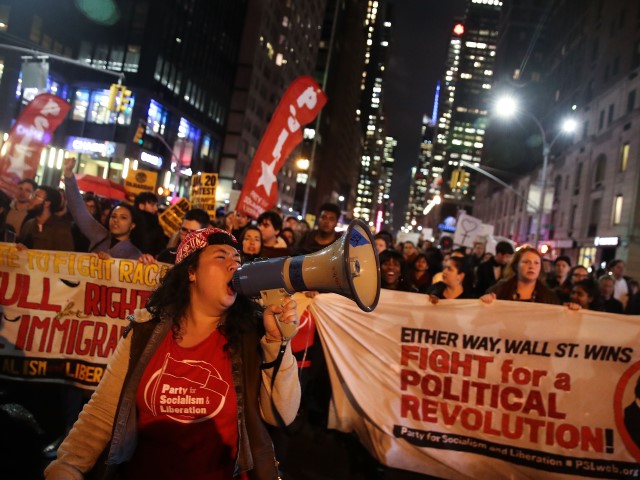 Hundreds of anti-Donald Trump protestors march through the street on 6th Avenue on their way to Trump Tower, November 9, 2016, in New York City. Republican candidate Donald Trump won the 2016 presidential election in the early hours of the morning in a widely unforeseen upset. (Drew Angerer/Getty)

On May 25, 2020, George Floyd was murdered by a Minneapolis police officer. Protests and riots broke out across the country the very next day.

Forget about your personal opinions of those protests and protesters. That’s not the point. The point is that in a matter of hours, IT WAS ON. The left exploded. The streets were full. The outrage, anger …  the need to get out there and protest could not be contained.

Despite the corporate media doing its best to spin the leak as coming from someone on the right, does anyone honestly believe that? Come on. Think. First off, a right-leaning leaker would not go to a far-left site like  Politico. Secondly, only an idiot would believe the leak would “cement” the Court’s decision to overturn Roe, which is the absurd spin coming from corrupt media loons like NPR’s Nina Totenberg. Anyone who cares anything about truth and logic knows this leak almost certainly came from someone hoping the widespread freak-out that followed would intimidate one of the Justices into backing off and saving the moral and legal obscenity that is Roe.

And I’ll tell you what … that was a good bet, a safe bet. … Of course, a leak showing Roe overturned will result in millions taking it to the streets. Of course, it will…! How could it not? Millions of women will be outraged over the loss of their BodilyHealthcareAutonomyChooseRights!

Okay, but I’ll ask again: Where the hell are they?

No matter what happens in the future, there is just no question that the organic, grassroots outrage is not there, not even among the left.

A civil war over abortion?

If anything, the Supreme Court is looking at this deafening silence and feeling pretty confident that the time has come to overturn Roe.

Follow us on Telegram for the latest updates: BeautyFresh is having an online warehouse sale from May 27...

When It’s Too Soon to Say “Happily Ever After” One...
- Advertisement -