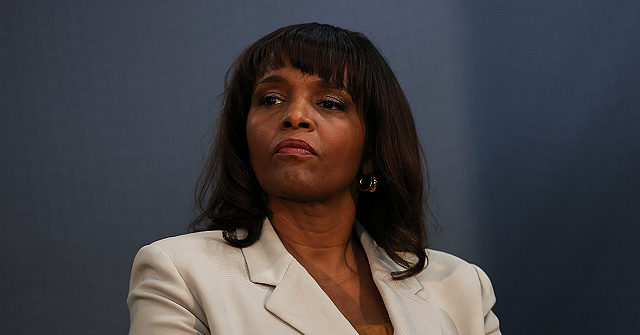 Questions over Pennsylvania Senate candidate Kathy Barnette’s military record rose to a crescendo on Wednesday, prompting her to finally release some military records.

Barnette had said on her website and in a tweet that she served for ten years as a reservist, but reporters were unable to verify her military record. The Free Beacon claimed that a Barnette spokesman hung up on them when they requested her military record.

On Wednesday afternoon, Barnette released three pages of military records to several reporters. The records appeared to show that Barnette joined the Army National Guard as an administrative specialist in 1990.

The records say she obtained the rank of E-4 two years later on August 8, 1992, and began serving with the Alabama Army National Guard on September 24, 1993, where she served for four years and two months. The forms say she was honorably discharged on December 5, 1997, and that her official Expiration Term of Service (ETS), or contract with the Alabama Army National Guard, officially expired on April 24, 1998.

The records say that prior to her time with the Alabama Army National Guard, she had three years and one month prior reserve component service, but they do not say where. They also show she had three months of prior active federal service.

The records say at the time she was separating from the Alabama Army National Guard in 1998, she had served seven years and seven months total.

The Army did not initially include that service when asked for Barnette’s service record, and indicated there could be more service, but has not yet responded to further inquiry.

Those are NGB-22 forms, which are for National Guard service members, not DD-214 forms. DD-214 forms are for federal active duty service under Title 10 and Title 32. For many in the Guard, the only Title 10/32 service they have is from their initial 120 days of basic training. https://t.co/vubBbNMlHk

However, some prominent conservative veterans say there are plenty of questions that Barnette still needs to answer.

Former Army Ranger Sean Parnell, who withdrew his candidacy for the Senate race, said there are still unexplained things in her record, or lack thereof. Parnell, who was endorsed by former President Donald Trump before he withdrew, has endorsed Barnette’s opponent businessman David McCormick in the race.

He questioned whether she has a DD-214, which he said she “a hundred percent” would have received if she served in the active duty Army at any point, including for basic training and advanced individual training.

He also questioned her service in the Criminal Investigation Division (CID), where she told the Federalist she served. “You can be an E-4 that becomes CID in the reserves, in active Army units you have to be an E-5, but in order to do it in the Reserves, but you have to have an associate’s degree and have to have gone to Officer’s Candidate School, or on track to go to OSC.”

He also said the documents she released do not show her being accepted to OSC at all. “What’s that about? There should be a record of that,” he said.

“The onus is on her to prove this stuff,” Parnell said. He said reporters have asked questions for months and have not gotten an answer. “Would you rather talk about this stuff before the primary, or have the Democrats ask it all in the general?”

Kurt Schlicter, a retired Army colonel, also said he had lingering questions. He said the records she released only covered her reserve time and also questioned whether Barnette had a DD-214, and said he could “put this whole DD-214 thing to bed for [Barnette] in about two minutes of talking to her.”

“But it doesn’t look like she wants to talk to anybody. I’m here if they want to reach out,” he tweeted. “And if there’s not a problem, I’ll be happy to say so.”

You know, I could put this whole DD 214 thing to bed for @Kathy4Truth in about two minutes of talking to her. But it doesn’t look like she wants to talk to anybody. I’m here if they wanna reach out. I know the issues. And if there’s not a problem, I’ll be happy to say so.

Breitbart News asked her campaign for a DD-214 but have not had confirmation on whether one exists and, if it does, when it might be made available.

“All candidates should face scrutiny and pointed questions about their biographies, their positions, their life experiences, and their work experiences. Barnette, to date, has not faced them. Now that she is surging, her team is trying to run out the clock,” Salena Zito wrote.

“Real Time” host Bill Maher has been a fan of Elon Musk taking over Twitter because he also is...
- Advertisement -

Republican Anthony Albanese has triumphed at the Australian election...
- Advertisement -