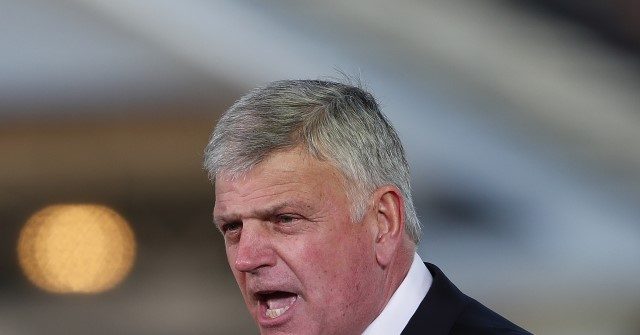 “The Left is calling for protestors to show up at churches this Sunday—Mother’s Day—to protest the Supreme Court’s vote on Roe v. Wade,” Graham wrote in a Facebook post. “My response was, GREAT—BRING IT ON!”

He called on Christians to attend their churches “in greater numbers than ever before—to celebrate and thank God for our mothers, and to celebrate LIFE,” adding that these “protesters are promoting death, not life.”

“And if protesters show up at churches, I hope they will find the churches packed out, and I hope the church will encourage them to stay and listen to the message—maybe they will hear something that will change their lives,” Graham concluded.

His message comes as pro-abortion radicals intend to protest the leaked majority draft decision of the Supreme Court case Dobbs v. Jackson Women’s Health Organization at churches across the country.

Ruth Sent Us, a radical-left organization, has sent out a notice over social media of sadistic protests occurring at unknown church locations throughout metropolitan cities.

“Whether you’re a ‘Catholic for Choice,’ ex-Catholic, of other or no faith, recognize that six extremist Catholics set out to overturn Roe. Stand at or in a local Catholic Church Sun May 8,” the radical group tweeted on May 3.

Protests on Sunday are a part of a so-called “week of action.” Ruth Sent Us has also published the justices’ supposed home addresses online for the radical protestors to locate and therefore intimidate the justices.

On Friday, Brian Burch, president of the national catholic advocacy organization CatholicVote, slammed the left’s plans as an attempt at harassment and intimidation while also calling on Attorney General Merrick Garland to enforce the law and protect churches, as Breitbart News reported.

“The aggressive rage exhibited by pro-abortion advocates over the past week, and the plans of anti-Catholic zealots to disrupt Catholic masses around the country this weekend, is a vile attempt to harass, threaten, and intimidate,” Burch said. “It is religious bigotry of the worst kind.”

“Yet these threats to the safety of Catholic pastors and parishioners have been met with a stunning silence from our Catholic President.,” Burch said. “Silence is not an option. President Biden must make clear that the targeting of Catholic churches is indefensible and against the law.”

“Further, Attorney General Merrick Garland must make clear that acting on these plans would constitute a violation of the Freedom of Access to Clinic Entrances (FACE) Act and will be punished to the full extent of the law. Furthermore, the Attorney General has an obligation to alert every U.S. Attorney across the country and remind them of the law and their duty to enforce it,” Burch said.

“No religious believer in America should fear for their safety while attending church this Sunday, or any day,” Burch said. “We once again call on all responsible leaders in Washington to condemn and stop these dangerous threats before they result in violence.”

Earlier this week, Sacred Heart of Mary Church in Boulder, Colorado was targeted by vandals who spray-painted its front door and busted in its windows, Breitbart News reported. The perpetrators tagged the building with “my body, my choice” and “keep your religion off our bodies.”

While the rest of the world has built up...

We already did one post on Rep. Eric Swalwell...

Controversial former police chief Sir James Anderton, who called for the return of corporal punishment and said people with...

Rojan Rondo Wiki:- Rojan Rondo is well recognized as an is an American professional basketball player. He plays for...

While the mass shooting of 10 people by a mentally ill man in Buffalo, NY, on Saturday stands on...

Myer has been accused of having 'double standards' in its new catalogue which shows women of all shapes, sizes...

Elon Musk on Monday fueled speculation he could be...
News

MSNBC anchor Joy Reid on Monday, during her show...
News

A man described by Project Veritas as a senior...
News