By Lee Davey For Mailonline

Manchester City have released a statement apologising after Aston Villa Manager Steven Gerrard revealed that goalkeeper Robin Olsen was attacked at the end of their game when City fans invaded the pitch to celebrate their title win.

Manchester City fans were told to get off the Etihad Stadium pitch after they became the latest set of supporters to invade the playing surface after watching their team pip Liverpool to the Premier League title.

In response, City swiftly released a statement saying: ‘Manchester City would like to sincerely apologise to Aston Villa goalkeeper Robin Olsen, who was assaulted after the final whistle at today’s match when fans entered the pitch. 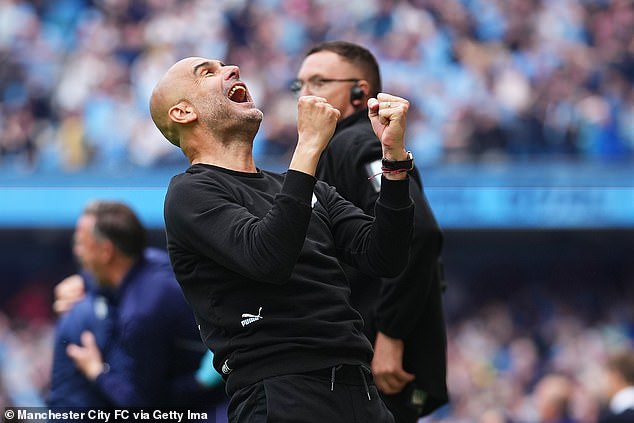 ‘The Club has launched an immediate investigation and once identified, the individual responsible will be issued with an indefinite stadium ban.’

But the Spanish boss then asked fans to leave the pitch to ensure his players could enjoy the celebrations safely and for staff at the Etihad to set up the trophy lifting display.

Guardiola’s side were far from their best and on a tense afternoon and trailed 2-0 with 20-minutes left thanks to goals from Matty Cash and Philippe Coutinho.

Ilkay Gundogan – on his final appearance for City – scored twice and Rodri added another to send the Etihad into raptures. 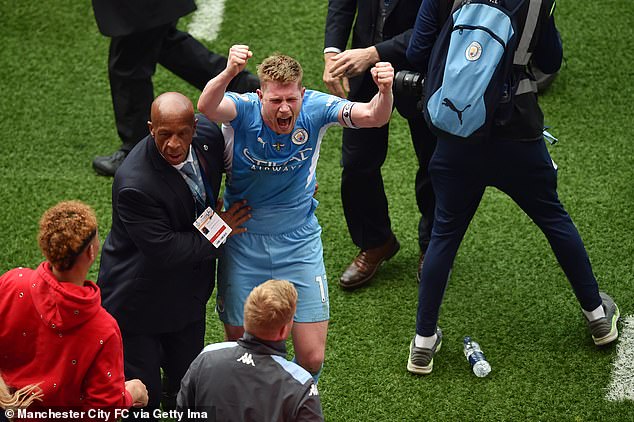 Thousands of City fans invaded the pitch with banners and flares at the final whistle to celebrate of their title defence after a hard-fought battle with Liverpool who were 3-1 winners over Wolves.

One of the crossbars were broken in the melee and City stars Gundogan and Kevin De Bruyne had to be escorted off the pitch as a cluster of fans approached.

It is the latest in a long line of pitch invasions that have have shrouded English football in recent weeks.

Everton fans invaded the turf at Goodison Park on Thursday night with Crystal Palace manager Patrick Vieira goaded leading to him lashing out at a fan.

Sharp was headbutted and required stitches for a headwound leading to the arrest of a 30-year-old man, who was later jailed for 24 weeks.

The on-field assault on Sharp brought back vivid memories of an attack on Jack Grealish -then of Aston Villa- in a game at bitter rival Birmingham City. 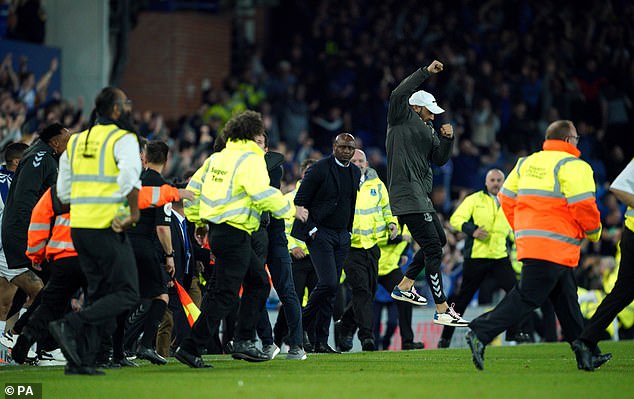 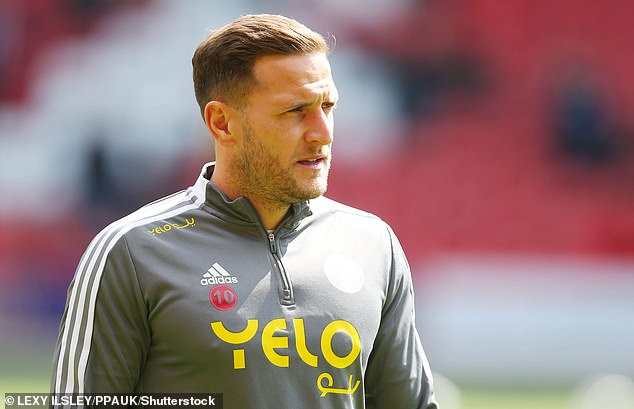 Grealish was knocked to the ground by a supporter who was subsequently jailed for 14 weeks and given a 10-year stadium ban.

The FA said it is ‘very concerned about the rise in anti-social behaviour from fans’.

In a statement on Friday, the FA called on clubs to ‘play a vital role’ and prevent pitch invasions as well as ‘taking their own action’. The FA said it was ‘reviewing our regulations to help stamp this behaviour out and to ensure the safety of everyone inside a stadium’.

The FA added: ‘Football stadiums should always be a safe and enjoyable space for everyone, and these incidents are completely unacceptable and have no place in our game.

‘It is illegal to enter the pitch area in any stadium and these actions are putting players, fans and people who run the game at great risk. This simply cannot continue and we can confirm that we are investigating all of the incidences.’

Elon Musk, here seen at an event in New York in early-May, is being aggressively wooed to set up...

A Russian ice hockey star who signed a million-dollar career with an American team is rumoured to have been...
- Advertisement -